ast week in Buenos Aires, we saw a few interesting things happen. On a personal note, I was happy to see Paulo Vitor Damo da Rosa extend his Grand Prix Top 8 streak to two in a row, both because he's a good friend of mine and because he was playing Esper, a deck I love to play. From a metagame perspective, it was intriguing to see three Mono-Blue Devotion decks make Top 8, a deck whose popularity had been waning recently.

It's a pretty regimented Top 8, with the three Blue Devotion decks I mentioned earlier mirrored by what is essentially three Mono-Black decks (I count the Rakdos Control deck as similar in spirit, if slightly different card-wise). Paulo, playing Esper, and the eventual winner, Philippe Monlevade, playing Jund Monsters, were the only outliers.

Taking a look at the Day Two metagame, the Top 8 actually consists of the four biggest decks, Esper Control, Mono-Blue Devotion, Mono-Black Devotion, and Jund Monsters (at this point, Jund is apparently the preferred build of those looking to go Monstrous). Mono-Blue boasts a good matchup against Monsters, a slightly favored matchup against Mono-Black (depending on who you ask), and a bad matchup against Esper. While Esper was the most-played deck, having even good matchups against the rest of the Top 4 is a good place to be, and I'd imagine that's part of the reason three Mono-Blue decks made Top 8.

All three of the Mono-Blue decks ran the same "25 lands, 28 creatures, 7 spells" configuration, although Mateus Dos Anjos used a spell slot on a Prognostic Sphinx. I don't know if it's good, but it sure seems sweet.

I only highlight this list to remind you that Mono-Blue (a) hasn't drastically changed since Pro Tour Theros and (b) is still good. If people get too cute, Mono-Blue is intrinsically powerful enough and very consistent, and it's doubtful it will ever be a bad choice. In fact, if the next deck I want to talk about gets popular, Sphinx's Revelation decks will likely get less popular, which plays into Mono-Blue's hands.

Looking Past the Top 8

Even though Esper was the most-played deck on Day Two, only one copy made Top 8. I blame part of that on a deck that saw a fair bit of its own success that weekend, as much as it burns me to admit it.

Not only were there two Boros Burn decks in the Top 16 of Buenos Aires, the StarCityGames Open in Seattle was won outright by a Boros Burn deck. People just love pointing Lightning Bolts at their opponents' faces, and when the strategy actually becomes good, the floodgates open. Burn is a horrible matchup for Esper, and the way Burn decks are constructed now, they are great against removal-heavy decks and still have game against creature-heavy ones.

For reference, the Burn list that won in Seattle:

Besides Boros Charm, there aren't too many actual Lava Spikes in the deck. Part of the reason that Burn normally has trouble with creatures is that Lava Spike matches up poorly against them, and is an incredibly narrow card to begin with. These Burn lists get to play a bunch of solid cards, all of which work toward the same plan of toasting the opponent, and most of which double as efficient removal spells if necessary.

I do like the look of Ariel Nagy's list from Buenos Aires a little bit more, because if you are going the burn route, Boros Reckoner puts you back into the "vulnerable to removal" camp. It seems like an incredible sideboard card against the Monsters decks, but I don't like it against any of the other of the Top 4 decks.

(Side note: What do all these decks have in common? Mutavault, which even makes it into Esper these days.)

While I'll fully admit that playing Burn isn't really my preferred activity (I'll attack with Wild Nacatl if I have to, but even that's pushing it), I can't deny that the deck seems like it's in a good spot right now. Given how many people seem to play Burn when it isn't as well-positioned, I would encourage those people to strike while the iron's hot. Burn is traditionally not the hardest deck to beat if one is so inclined—a weakness it shares with most linear decks. Part of the reason I like (or at least begrudgingly admit the power of) Burn right now is that, as I mentioned before, it gets to play cards that are objectively powerful. That does make it a little more resistant to sideboard hate, and gives it the tools to win even reasonably long games.

Skullcrack is a good answer to lifegain, Chandra's Phoenix is a good source of reusable damage, and sideboarded Firedrinker Satyrs and Viashino Firstblades take advantage of decks looking to cut their removal spells. The deck even has Mizzium Mortars to stop Blood Baron of Vizkopa, a card I expect to see a fair bit of come Cincinnati.

Speaking of Cincinnati, what am I playing there?

While I normally would shy away from delving too deep into my deck choices pre-tournament, I'm so confident about this Grand Prix that even sharing my entire list won't stop me from demolishing the tournament.

That, or the opposite. While I have narrowed down my choices to a couple of options, I'm not doing anything too crazy, and I don't mind taking a look at what they are (even if it might cost me a little tournament equity).

Cards I Am Playing 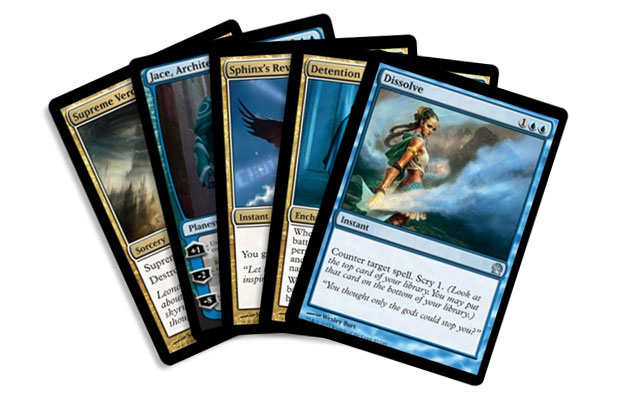 Given that I've decided to play a Revelation deck, here's the core. At this point, I'd include Dissolve, and I am going to play four of each of these cards. I can't imagine a WU deck without four of all the non-Dissolve cards in this list, and I like where Dissolve is positioned. If you absolutely must trim numbers, don't look at any of the cards except Dissolve. 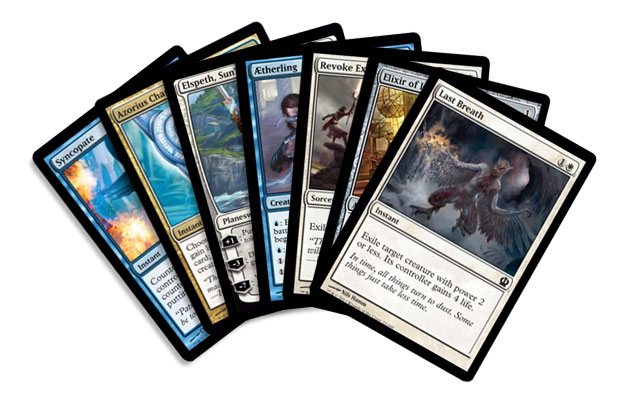 Regardless of the rest of the deck, I'm at least considering some number of the above cards. I did put Ætherling and Elixir on the list, but be warned that they are like dangerous chemicals, and if you mix them, your tournament will explode. Both are win conditions that you absolutely don't want in your opening hand, and I am going to play one OR the other. With Elixir comes probably 1–2 Elspeth, and with Ætherling I'm more likely to play 2–3. The reason I mention Azorius Charm, Revoke Existence, Syncopate, and Last Breath here is that whether I play straight WU or Esper, I'm looking at playing a couple of each (or just one in the case of Revoke).

The next question I have to answer is which optional package I'm going with. There aren't a ton of slots left after including all the above cards, so it's really just a choice of what lands I want and what the last few spells are, although that is really the choice when it comes to building this deck.

If I play straight WU, I get to play Divination (yes!), more basics (Beta, of course), and an overall more consistent deck. It's clearly less powerful, and gives up a lot in the control matchup. What it does much better is play against Burn and other aggro decks, with more untapped lands, early interaction, and less pain and inconsistency. I *want* to play WU, but am not sure if I can pull the trigger on it.

Because WU has fewer variable options, here's something very close to what a final WU list would look like:

The second option is Esper, which is mostly incentivized by all the scry Temples. Playing ten to twelve Temples is something the deck kind of wants to do anyways, and once you're there, playing Doom Blade and Thoughtseize is relatively free (there's no such thing as a completely free lunch, even in Magic). Thoughtseize is the best card in slow matchups, and Doom Blade/Ultimate Price are great right now.

I honestly don't know where I'm going to land right now, and in the interest of full disclosure, if I can't get a list to look the way I want it, I might just play Excalibur, which is what Owen calls the Mono-Black list that has crowned him king. I'd much rather be casting Revelations, but it's hard to make the last couple choices, and at least I know what Mono-Black wants to look like.

For more about Esper (and what a list would look like), I'd recommend Paulo's analysis of the deck he played in Buenos Aires, because that will certainly influence my decision as well.

As normal, I'm going to sign off with a request for luck, something I can never get enough of, especially given just how much I used up on my run to the Top 8 in Richmond. I'll be back next week with an insightful analysis of the deck I ended up playing (if I do well) or the decks other people played (if I do poorly).