elcome back to Perilous Research. Today, I'll be taking a look at one of the most exciting cards in Theros. I'm normally really good at card evaluation, but every once in a while I find myself confounded by a new card. Today's preview card is a complex puzzle: a card that has the potential to be absurdly powerful in a huge portion of Constructed metagames and merely reasonably strong in others.

Nephalia Drownyard is one of the best tools for control mirrors in recent memory. Tapping out is always a dangerous proposition when both players are packing a good number of counterspells and some hard-to-deal-with finishers; a big spell can just be countered and followed up by another big spell. A card like Nephalia Drownyard lets a control player sit back and relax while hitting land drops and playing cheaper instant-speed card draw. The constant milling pressure of Nephalia Drownyard will eventually win the control mirror on its own. This control-mirror conundrum was recently solved by the combination of Ætherling and Cavern of Souls. Nephalia Drownyard remained a powerful tool for control matchups, but it wasn't the auto-win that it used to be thanks to an uncounterable and nearly unraceable combination. The introduction of Theros will herald the end of Cavern of Souls and Nephalia Drownyard's legality in Standard, but a new tool to passively mill opponents in control matchups will be introduced and will likely be one of the—if not the—best cards for control mirrors.

My favorite anti-control card of all time was Ajani Vengeant. I loved ticking up my courageous lion while my control opponent floundered, knowing that a one-sided Armageddon loomed while he or she struggled to stick a Broodmate Dragon that would have to win the game on its own. Today's card instills that same sense of impending doom into your opponent.

This new control-mirror breaker excels against decks with high creature density too, especially midrange strategies that don't apply a lot of pressure before the third turn.

At this point, you're probably scratching your head, wondering what today's card could possibly do.

It's going to take a little bit of time for you to process how good this is, so I've taken the liberty of stewing on this for you. Ashiok, Nightmare Weaver is probably absurdly strong against any deck that doesn't play a healthy dose of one- and two-mana creatures. Even there, Ashiok, Nightmare Weaver can do some very serious work keeping up if you're able to protect it in any way.

Let's think about it. At three mana, it will be entirely reasonable to resolve Ashiok, Nightmare Weaver against control decks. They'll find their library dwindling until they experience a full-fledged Identity Crisis. You might also backdoor your way into an Ætherling and that can be dropped into play without fear of countermagic and without tapping a single land.

Against aggressive decks, Ashiok, Nightmare Weaver is a risky proposition. Tapping three mana for something that doesn't immediately affect the board will often result in a loss against Burning-Tree Emissary decks. It's not all bad, though. If you're able to resolve Ashiok, Nightmare Weaver into a cleared board with the help of inexpensive spot removal, you'll find yourself netting a lot of free cards by aggressively playing any one- or two-mana creature you flip out of your opponent's library. Putting Burning-Tree Emissary onto the battlefield with Ashiok, Nightmare Weaver will effectively work as a ritual, allowing you to play powerful/expensive spells very early in the game. 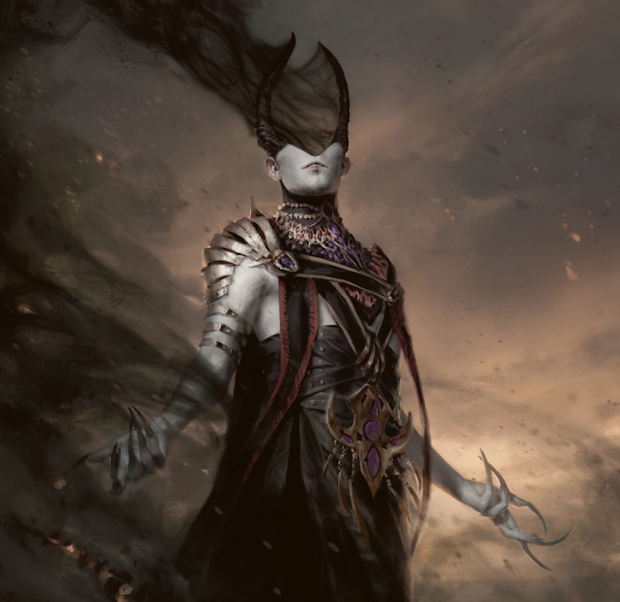 I want to play as much inexpensive spot removal as possible. It's going to be important to keep the board clear and under control whenever possible.

I was always a huge fan of Augur of Bolas. Omenspeaker doesn't provide card advantage in the same way that Augur of Bolas does, but scry 2 is a lot more powerful than you might expect it to be. I often found myself struggling to hit land drops while putting multiple lands on the bottom of my deck with Augur of Bolas, so Omenspeaker lets me find precisely what I'm looking for. I can find lands when I need them, card draw or Planeswalkers when I have lands for days and the opponent has no pressure, or more spot removal against a creature-centric deck without token production.

I want to play a lot of removal here. Doom Blade, Dimir Charm, Warped Physique, Far & Away, and Devour Flesh seem like the best options available. Things may shake out differently, but I probably want to play a good number of Devour Flesh and Far & Away in a format where hexproof and creature enchantments are likely to run rampant.

Ætherling is still the best finisher for a draw-go style of control deck. I don't ever want to draw more than one copy, but I think it's safe to play two copies here. It's possible that I'm wrong and we should only be playing one copy. If that's the case, then it's probably correct to include more countermagic.

Essence Scatter gains a lot of power with Cavern of Souls exiting the Standard environment. There are a lot of creatures with indestructibility or "enter the battlefield" effects that get trumped by the card. It's extremely likely that we can trade Essence Scatter for a creature that costs more mana in an environment that's sure to be very creature heavy.

I want to have outs against everything and anything. A single copy of Cyclonic Rift gives the deck a way to win in situations that would be otherwise unwinnable.

Drawing four cards is really good. I'll gladly take any Opportunity presented to do so.

Jace, Architect of Thought draws will allow us to largely ignore 1-power creatures played by our opponents while presenting a huge-card advantage engine against most opposing strategies. This seems like exactly the type of card we want to be playing in a deck like this.

I've been very happy with the 3 Syncopate/2 Dissipate setup in my blue decks as of late. Dissipate is rotating, but Unburial Rites and all the powerful graveyard interaction from Innistrad block goes with it. Cancel seems like a fine replacement here. I like this better than Psychic Strike because there's still some potential for my opponent to be using her or his graveyard against me.

If Theros was released exactly as is, then I would be very happy to bring a deck like this to the table. The extremely high density of removal will cause serious problems for any opponent relying heavily on fast creature starts, while Ashiok, Nightmare Weaver; Jace, Architect of Thought; and a healthy dose of countermagic will go a long way in defeating control decks. We probably want an extra Planeswalker and a few copies of Dispel in our sideboard for control matchups and two or three copies of Wring Flesh in our board against decks with a lot of 1-toughness creatures.

Aggressive decks, especially Mono-Red, are likely to be a big part of the Standard metagame after rotation. This could mean that we need to be playing white for Supreme Verdict and some semblance of lifegain. This could also mean that Ashiok, Nightmare Weaver finds a home in sideboards as one of the best cards against non-aggressive strategies. Remember, even if Ashiok, Nightmare Weaver isn't appropriate for main-deck play because a format has become too aggressive, it's still going to be one of the best sideboard options available in Standard.

Don't miss any of the Theros previews here on DailyMTG.com. Tune into Perilous Research next week for another exciting preview card from the new set.