What Now? What Next?

he Banned & Restricted List announcement earlier this week has put the nail in the coffin of Caw-Blade.

This upcoming weekend will be something different; maybe something special. For many players—the players who have been plugging at it the past several tournaments—it will represent a last chance to tap four mana for Jace, the Mind Sculptor in Standard. Some players—especially those who have never summoned a Stoneforge Mystic or bounced a mana-producing creature with the most vilified of planeswalkers—may see a first chance and a last chance at once. 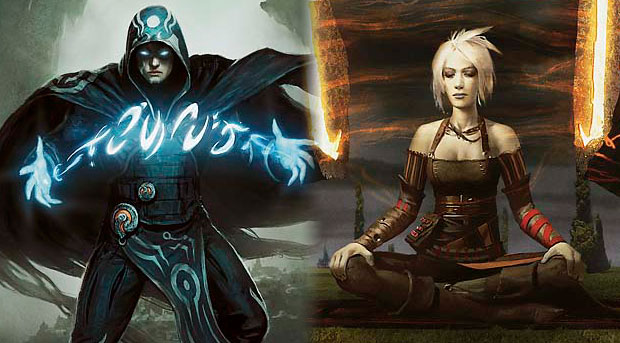 Now that the DCI has made it official, if you want to win this last weekend, my recommendation is to have Stoneforge Mystic and Jace, the Mind Sculptor in your deck. And though the latest results have the first-place winners for the Philadelphia PTQ season (which includes a fair amount of pre-New Phyrexia) looking like this... 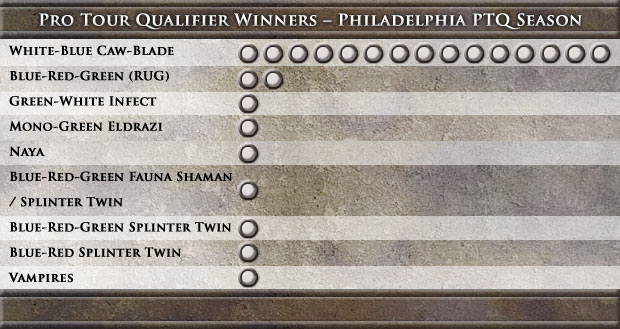 ... I would actually not recommend straight White-Blue Caw-Blade, but Twin Blade.

This is the deck that Ben Wienburg used to win the 6/11 Louisville, Kentucky PTQ.

Given that map, why Twin Blade over Caw-Blade?

I've said it before... The Deceiver Exarch combination is the most powerful thing you can do in the present Standard format. Combining that with the best turn-two play you can make (Stoneforge Mystic on the play) allows Twin Blade to operate at a completely different level than other decks in the metagame.

In my experience, you actually win about 75% of games with the Deceiver Exarch / Splinter Twin combination, but of those, most of those wins come after the opponent is forced to spend cards and mana answering the momentum generated by your Stoneforge Mystic-into-Batterskull Plan A.

Stoneforge Mystic-into-Batterskull is, in case you haven't been paying attention since the appearance of New Phyrexia, a pretty good Plan A. Many beatdown decks have elected to run main-deck Manic Vandal or even Crush (which can't be shifted with a Spellskite) to deal.

Well, with the opponent worried about basically a free Baneslayer Angel attacking on turn four, spending cards and mana to not lose to that, you have a great big opening to set up and win with the Exarch combination (Deceiver Exarch + Splinter Twin / infinite attackers, et cetera).

My guess is that if the format had been allowed to progress without the June 20 bannings, Twin Blade (also a Stoneforge Mystic / Jace, the Mind Sculptor list, to be fair) would have supplanted straight Caw-Blade as the premiere deck in the format by combining most of force of the two best strategies in Standard. Check out Ben's sideboard... He could fall back on Inferno Titan (Exarch Twin's Plan B-slash-RUG's Plan A) as yet another way to win! Only a deck that can produce

has that kind of flexibility and power.

We'll come back to the theme of doing more than one thing well in a bit.

Looking at the above chart, through June 4 Caw-Blade had won more PTQs for Philadelphia than every other strategy combined. How the heck did we get to this place?

Stoneforge Mystic, like Jace, the Mind Sculptor, had been available for play since Worldwake. But it wasn't until Pro Tour Paris and the rise of Caw-Blade that Mystic became a "problem." No one is saying Stoneforge Mystic isn't a super-duper card—because the fact that it can Top 8 a Legacy Grand Prix is quite telling—but what became the best two-drop in Standard lagged a good deal behind Fauna Shaman and Lotus Cobra (and other stuff) until Sword of Feast and Famine.

The Mirrodin Besieged Sword did two things that ultimately changed the face of Standard:

I actually think that it is possible that R&D could have just banned Sword of Feast and Famine in lieu of Stoneforge Mystic and Caw-Blade would have still been a fine deck... but it wouldn't have been the Cadillac of Cadillacs that it has been these past months. The problem, of course, is that Batterskull came with New Phyrexia and suddenly Stoneforge Mystic had an even better Equipment to get!

But however you cut it, the future of Sword of Feast and Famine is going to be... different.

Likely we will see fewer copies of Sword of Feast and Famine in tournaments, which will be good for Titan Magic. Before Pro Tour Paris, there used to be a joke that you can play whatever Titan you want in Standard...

All the Titans continued to see play during the Caw-Blade era, but not in their previous numbers. I think the most immediate effect of the Stoneforge Mystic banning—and the resulting reduction in Sword of Feast and Famine play—will be a jump in Titans popularity. 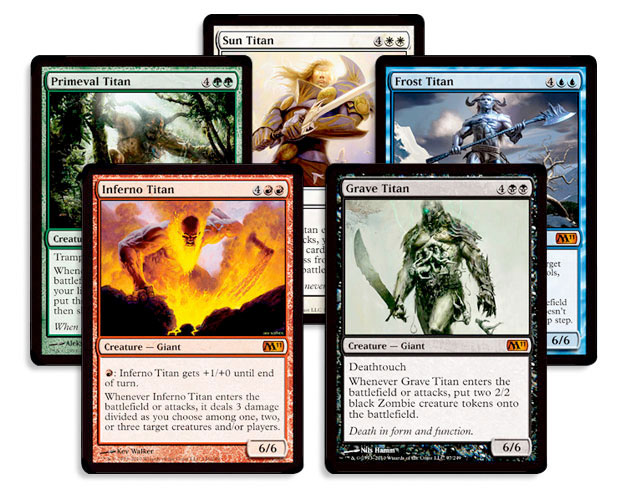 An interesting possibility is that we see different Equipment play. Stoneforge Mystic didn't make Equipment. This isn't even the height of popularity that Equipment has seen in competitive formats! There was a time when Umezawa's Jitte was played as a four-of in greater than 50% of decks, and that dances between Umezawa's Jitte and Manriki-Gusari or even Celestial Kirin were common.

In Standard, Troll Ascetic was a premier Equipment-carrier. It lugged around not just a Jitte but Sword of Fire and Ice, Loxodon Warhammer... all kinds of stuff. 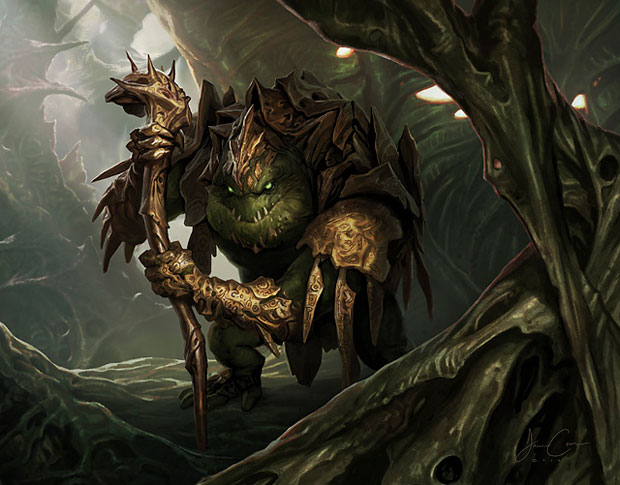 Let's talk a moment about the effect of banning Jace, the Mind Sculptor...

Consequently, just as these bannings have taken the legs out from underneath Caw-Blade, I think we have seen the end of Exarch Twin as we know it in Standard.

Previously there was a cadre of players who thought Spellskite was good against Exarch Twin. Those players were not correct. Spellskite is many things, but a determiner of games against a prepared Twin player was not one of them. The combination of Into the Roil and Jace, the Mind Sculptor allowed Twin to set up its turns to win, regardless of the opponent's little 0/4.

Jace, the Mind Sculptor was therefore not just "good," but central to the Exarch Twin strategy. Twin used Jace to draw the cards it needed to assemble the combo, deny the opponent the tools to resist its best-in-breed Plan A, and ultimately to remove the great colorless hope that was supposed to shut off the combo.

Now? None of them.

I don't think that we've seen the end of the Splinter Twincombo... How can we? It's the best thing you can do in Standard, and a heck of plan when the average opponent plans to attack with a six-drop. However, with its adamantium Swiss Army knife gone, Twin is going to have to change and evolve.

Spellskite is going to be better than ever. 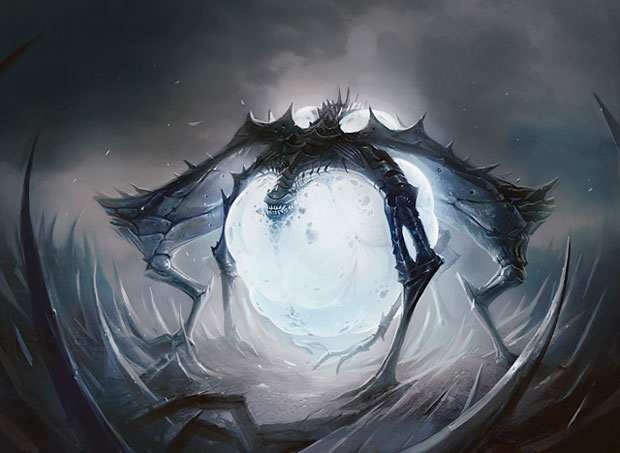 All of a sudden Spellskite is going to be effective against Twin! In addition, it is going to put up wins against all kinds of kids trying to take the place of Caw-Blade in the metagame. Spellskite is fantastic against Teetering Peaks, laughs off Staggershock, and blocks. And especially when we see decks with Mutagenic Growth capable of taking PTQ wins in the era of Caw-Blade, the question of what's next has big implications for the little 0/4.

But how about today? What now?

As far as I can tell, Adrian Popescu is the biggest stud in Dominaria right now:

Adrian took down Caw-Blade in the finals, and presumably Caw-Blade more than once.

This is the kind of deck that I imagine R&D imagined when ushering cards like Glistener Elf into the format: the crown jewel of Phyrexian mana. While this green-white deck can only produce green and white mana, it proudly packs four Dismembers alongside free action from Mutagenic Growth. On the play you can easily win on the second turn with this deck: Glistener Elf into double Groundswell + Mutagenic Growth... no problem! 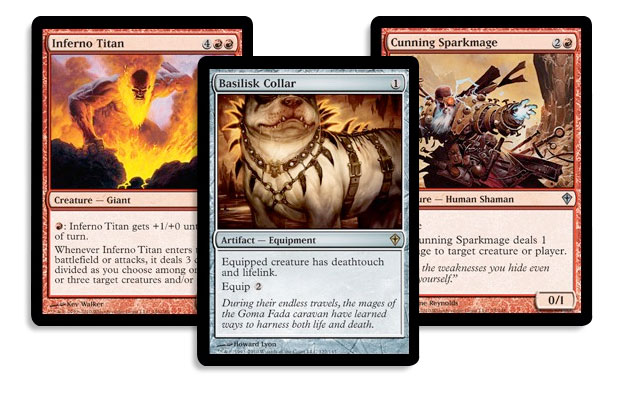 Of course the Naya strategy is going to lose its Stoneforge Mystics along with everyone else, but it's nice to see a Fauna Shaman / Vengevine attack deck (without Jace, the Mind Sculptor especially) in the lead position.

That said, it's my guess that a different PTQ-winning deck may give us our first look (well second look in this column, but it bears repeating) at what's next:

Ironic that Bjorn won a PTQ in Philadelphia for Pro Tour Philly?

Domi's deck does multiple things well. It has Preordainand Fauna Shaman. Unlike builds like Naya, it can Preordaininto Fauna Shaman. The rest of the metagame is losing a premier two-drop, but Domi's hybrid plays both of the next two best twos.

He can pour Vengevines into the graveyard and use them to set up the best thing you can do in Standard: find Deceiver Exarch! In addition, the Fauna Shaman engine gives an inexpensive route to running Manic Vandal as a main-deck solution to Spellskite, and future versions can probably run a bunch of Spellskites to defend against other people's Exarchs.

Domi already ran a sideboarded Trinket Mage; this subtheme can be expanded to a Basilisk Collar for a future Cunning Sparkmage or Inferno Titan plan a la Naya. Domi already ran one Birthing Pod; this can potentially be expanded to more copies to replace the loss of Jace, the Mind Sculptor (which was only a three-of to begin with).

In a time of uncertainty and impending exploration, Blue-Red-Green with Fauna Shaman and Exarch Twin seems to have the tools to take over.

But you know what's cool?

That's the cool thing about uncertainty!

We don't know what is going to be the best yet. Titans will rise again. There is still a powerful combo to exploit. Brewers will see wide open fields of wheat and hops and card advantage. Mana ramp will return, and like Matt Saracen in the first season of Friday Night Lights, the second-best Jace is going to have a chance to prove just how good a blue hood can be with "just" three abilities.

It's a strange world; about to get stranger. Let's keep it that way.