A White Knight So Green It's Almost Blue

oday most of you know Matt Place as a member of the secret team of card-tapping commandos who design and develop your favorite game and mine up in Renton, WA. Rumor has it that long before the Pros had figured out never to let even an off-color "Karoo" pass in Ravnica Block Booster Draft, Matt was, you know, not letting Karoos go by in booster draft... As a member of Magic R&D, he was ahead of the curve in managing his lands. But long before this gig as a member of that shadowy cadre who produce this game we love, Matt was a standout Pro Tour player, and even a Rochester draft Pro Tour winner! But even before that, he was managing his lands in outstanding fashion.

I will never forget the story. It was written in a battered edition of The Duelist magazine in those bygone days before Top Decks, before Swimming with Sharks even, before there was such a thing as magicthegathering.com (let alone any other Magic strategy websites)! This maverick top player Matt Place was such a master of managing his lands that he was even a master of managing other people's lands.

The card in question was one of the holy trinity of the day, the only thing in the same neighborhood, power wise, as "the best card drawing engine of all time" Necropotence itself; I speak, of course, of Land Tax. Land Tax generated so many fantastic stories and engineered so many comebacks (and twice that many miserable games for Land Tax's opponents) that we players were almost sorry it was eventually put on the restricted list. Almost. In this story, Place showcased his ability to control timing, about three or four years before our modern conception of "the stack."

Matt and his opponent had the same number of lands in play; one of Matt's lands, though, was a Strip Mine. He pointed it at one of his opponent's hapless lands (probably a Mishra's Factory). In response, Place put Land Tax on the stack (but it wasn't called the stack back then, and you couldn't really do this today—now that we have a stack—with Land Tax, but you could with something along the lines of Tithe). Matt's Land Tax resolved... and he had one fewer land in play than the other guy! The sacrifice of his Strip Mine was in the record books, but the target was not yet woebegone... It was still in play. So Place pulled off the "Landcestral Recall" and then his Strip Mine resolved, a one-for-one that smelled desperately four-for-one.

Yes, Land Tax was a great one!

It was far too powerful at one mana, though, and though it produced some nice narratives (as well as Randy Buehler's North American Extended Championship), the card was fundamentally unfair, and more than that, generally un-fun for the opponent. But it was a nice idea and a beloved component of deck design, so R&D has tried with varying success to produce a white "Land Tax" kind of effect in non-utterly broken form.

The most prominent of these is probably the aforementioned Tithe. Tithe was kind of a one-use Land Tax that saw a lot of play because of its low mana cost, and second, its interaction with Plains-stamped dual lands. Other cards reminiscent of Land Tax have seen play to varying degrees from Oath of Lieges (more than a bit conditional... but a pretty good anti-land destruction sideboard spell) to Endless Horizons (much less limited, but also much more expensive... so it has yet to make its mark). What R&D has not done—at least not until Shards of Alara—was to try to stick Land Tax onto a creature.

I think this is a pretty good first attempt: 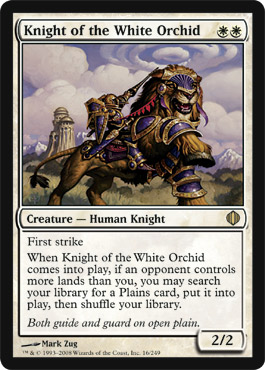 This creature is quite obviously Bant. That is, Knight of the White Orchid is from the white-centered shard of blue, green, and white (in another block they would chill at Treva's Ruins). You can tell its shard from the subtleties on the text box, even if you weren't overly familiar with the new names.

Fundamentally Knight of the White Orchid is the latest in the long line that started with White Knight and has given us such spectacular tournament standouts as Silver Knight and Knight of Meadowgrain; this creature, this 2/2 First Striker for

, is made of the same stuff that produced National Champions, at least one World Champion, and more Grand Prix winners than I can easily recall. We are all supposed to look at Knight of the White Orchid and immediately recognize the rich 2/2 soil out of which this White Orchid has grown.

The fundamental mechanic of the card, superficially a one-shot Tithe-like effect, is easy to miss... While it is meant to remind us of the Land Tax lineage, this ability is actually pretty green.

Look familiar? Green has its own lineage of three-drops with the ability to search up particular types of land and put them directly into play.

In relatively recent times—including the active list from Tenth Edition—R&D decided to experiment with a variation on the model. What about Yavimaya Granger but without the echo? I know, what if we doubled up Wood Elves's body? The result was Civic Wayfinder.

Twice the size of Wood Elves, essentially a Granger without the massive potential downside... but the land goes to hand instead of directly into play. Civic Wayfinder is a good creature, too!

To tell the truth, this sequence has been about as successful as green creatures can reasonably hope to be. Wood Elves helped to produce Katsu Mori's World Championhip; Civic Wayfinder was a key element in Charles Gindy's Elves deck that recently won Pro Tour–Hollywood. All of them have been played in top decks.

Knight of the White Orchid is not an "automatic" source of card advantage like its green brethren, but it makes up for this by costing 33% less mana, and secondly, having a body that would slaughter any of them in single combat. While only strictly one-third less expensive than most of the green creatures, in practical terms, Knight of the White Orchid costs about half as much (just think about the two-land hands you keep speculating on drawing more lands that just don't pan out). From this perspective, its Constructed implications are quite interesting.

2) Knight of the White Orchid's land comes into play untapped. Therefore it allows you to make a wider variety of plays than might seem immediately obvious. For example a free Plains open will let you play a second 2/2 in Isamaru, Hound of Konda, say... or in an example like the first (above), you can run out another two-drop.

3) Knight of the White Orchid rewards clean play (more even than clean play is always rewarded in the long run). You know those guys who play green spells while their Nettle Sentinels are untapped, and sometimes get caught with tapped Nettle Sentinels later in the game (but usually get bailed out on account of just having another green spell)? Knight of the White Orchid will punish those players... "Accidentally" playing a land before playing the Knight will cost you card advantage, and transform this elite creature into an option that is simply worse than White Knight, Silver Knight, Knight of Meadowgrain, Sigiled Paladin, whatever.

This is not to say that you should not play Knight of the White Orchid when you can't reap card advantage and mana acceleration; Jon Finkel always tried to hammer into my head that you have to run out the Tin-Street Hooligan (presuming it is your only two-drop) even if the opponent missed his Signet. This is something that you will have to evaluate on a case-by-case basis. Back in the Visions days, the Mad Genius of Magic (now also a member of R&D), Erik Lauer, was obsessed with getting two-for-one with his Tithe, and would forego short-term mana efficiency to make sure that he would get his extra card. My guess is that most decks that incorporate this card will be some kind of White Weenie and will have something like twelve cards on two, so you will usually have options.

On the other hand, there is no reason why Knight of the White Orchid can't be played in a more controlling deck as some kind of a Sol Malka oddball two-drop. As a sideboard card, Knight of the White Orchid can be thought of kind of like Volcanic Hammer in the Chapin Korlash deck: a little out-of-place looking, but highly functional in terms of how it affects the opponent's ability to exert pressure in the early game. Don't forget that Knight of the White Orchid is a pretty effective piece of combat cardboard, and can help slow down some beat down decks' fastest draws while doing exactly what control decks want to do: you know, draw more cards.

Blue. Ironic? There is just no other word for it.

I think that Knight of the White Orchid is good enough that it may crack the Kithkin tribal lines of the modern White Weenie deck. This creature is a Human Knight, not a Kithkin, and lacks the inherent synergies with automatic four-ofs Rustic Clachan, Goldmeadow Stalwart, and tribal "Crusade" Wizened Cenn. However this card seems so good that it will either be played in that deck anyway or help give rise to an all-new incarnation of the enduring strategy in Standard, Block, and potentially wider formats.