elcome back to Perilous Research, DailyMTG.com's exclusive Magic Online column. Today, we're going to take a look at an exciting new card from Dragon's Maze. I would like to start our discussion with a bit of a history lesson.

Aggressive Red strategies have been a part of Magic since the beginning. These decks aim to win the game quickly and consistently, preying on opponents with slower strategies or suboptimal draws. Traditionally, the most effective way to combat aggressive strategies has been to aggressively trade one card for one card whenever the opportunity presents itself. This forces the game to go longer and ensures you'll be winning once you start resolving card draw or other card-advantageous spells. 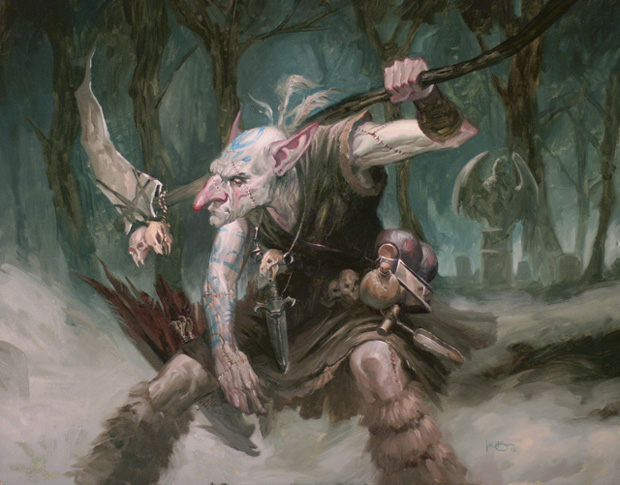 It stands to reason that the most successful Red decks throughout Magic's history have had access to repeatable sources of damage. Cards like Hammer of Bogardan and Cursed Scroll are the most obvious examples. Under ideal circumstances, the Red deck will dispatch its opponent by the sixth, fifth, or even fourth turn. However, opponents will often stabilize with a few life and a few cards in their hands while we, the unfortunate Red players, are stuck drawing presumably countered spells off the top of our libraries. This is where cards like Cursed Scroll and Hammer of Bogardan really shine. Cursed Scroll would whittle away at the opponent's life total or, when in multiples, be able to kill any threat put on the table. Hammer of Bogardan would eventually exhaust opponents' resources and be able to punch through the final points of damage.

These cards were so effective that Mark Le Pine was able to take them all the way to the finals of the World Championship, where he would finally lose to the German Juggernaut, Kai Budde.

Things have changed a lot since those days. We no longer have tons of inexpensive land destruction and lands that tap for two colorless. These days, Hammer of Bogardan probably wouldn't see any Constructed play outside of a Block Constructed format. Meanwhile, Cursed Scroll would probably still be an extremely powerful tool, especially now that it can be used to gun down Planeswalkers.

The card we'll be talking about today will remind many people of these great red staples from the past. Without further ado, let's take a look at Pyrewild Shaman. 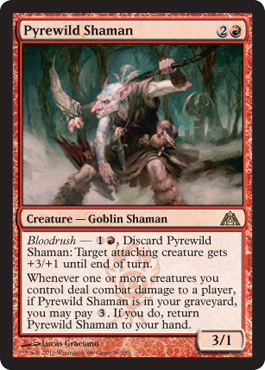 Pyrewild Shaman is always on the case. It only costs two mana to bloodrush and wise players will be quick to use the bloodrush as soon as they're able to trade it for a full card. The card does a lot of different things for a red deck and I think it's likely that some aggressive strategies will want to play two or three copies of this card in their main decks once it's released.

The true strength of Pyrewild Shaman is revealed in the aggressive-creature mirror match. Magic isn't quite like it used to be. Current midrange or control strategies have extremely powerful endgames that will likely be able to ignore a card like Pyrewild Shaman, even if it comes back three or four times over the course of a game. Pyrewild Shaman will, however, be a great tool for decks like Naya Blitz when fighting mirror matches.

Midrange and control strategies will have things like Thragtusk with Restoration Angel or a game-ending Craterhoof Behemoth by the time Pyrewild Shaman starts accruing card advantage, but the most aggressive mirrors can be easily dominated by the card. Both halves of the card are fine here: a 3/1 body that can be aggressively traded and returned later for additional value is an excellent tool for winning the long game, especially on the play. Meanwhile, using the pump spell half the first chance you get to kill an opposing creature while saving one of your own is going to put most opponents in a position where they're forced to block and trade on virtually every one of your attacks.

Pyrewild Shaman will excel in all matchups where you need all your cards to matter on the earliest turns. Here, Pyrewild Shaman will be easily traded for one of your opponent's cards and begin taking the game over once the dust settles. Anyone who has been playing Naya Blitz this season can tell you that the longest games usually happen in the mirror, when both players are attacking and trading guys; usually, the player who draws fewer lands in the long run will win the game. A card like Pyrewild Shaman greatly decreases the randomness of this matchup and gives a player room to outplay his or her opponent.

Pyrewild Shaman works well with indestructibility and/or first strike. Bloodrush only grants the attacking creature a single point of toughness, but a first striker will gladly put the 3 points of power to good use against the largest of opposing creatures. Thalia, Guardian of Thraben is the most obvious first striker to pair with Pyrewild Shaman. Bloodrush is unaffected by Thalia's passive ability, your opponent will be forced to pay additional mana for all his or her combat tricks, but you'll be able to bloodrush Pyrewild Shaman or Ghor-Clan Rampager at no additional cost.

Let's take a look at what a deck using Pyrewild Shaman might look like. There are a number of strategies that might want to include Pyrewild Shaman. Black-red strategies with Vampire Nighthawk or red-white-blue strategies with four copies of Geist of Saint Traft are places where one might to expect to see the newest Goblin Shaman. I think Naya Blitz is the most obvious home for the Shaman, though, so I'm going to attempt to build an aggressive Naya Humans deck that tries to maximize the value of our latest preview card.

Experiment One, Boros Elite, and Champion of the Parish are the best one-drops available in Standard. These cards will allow our deck to put a lot of pressure on our opponents in the very early turns of the game. This should force them to make aggressive trades that can be broken in our favor with Pyrewild Shaman.

I've already spoken at length about Thalia's positive interaction with Pyrewild Shaman. I don't want to play four copies of the legend, in an effort to dodge drawing multiple copies, but I'll be happy to jam as many Thalia as I can fit into our deck.

Flinthoof Boar is the most efficient two-mana creature in terms of power that's available in the current Standard format. It combos nicely with Burning-Tree Emissary, a card we'll definitely be playing four of, especially in a deck with four copies of Lightning Mauler. Mayor of Avabruck will finish off our two-drops, providing our deck with an anthem and a Werewolf effect that's very strong against the format's blue decks.

Sprinkle on some Frontline Medics and Searing Spears and we have a powerful deck. I'm not sure what we'd include in our full sideboard, but I'd like some copies of Pacifism for Thragtusk decks and a few Boros Charms against RWU and Esper.

4 Champion of the Parish 4 Experiment One 4 Boros Elite

2 Tajic, Blade of the Legion
39 Cards

Will Pyrewild Shaman be the latest incarnation of Hammer of Bogardan? What types of decks do you think will be most inclined to include the Goblin Shaman? Hit the forums to discuss the card and all the decks you'd like to use it in.

Next week, I'll be taking a look through the Dragon's Maze Card Image Gallery and, in preparation for the Prerelease, having a discussion on the most effective ways to build a sealed deck. Be sure to join me and get a leg up on the competition in your first Dragon's Maze Limited event!