2 Bonfire of the Damned 3 Pillar of Flame

The winning deck from the event does multiple things well. It features one of the most hard-to-handle threats in the format (Geist of Saint Traft) with one of its most no-nonsense big bruisers (Thundermaw Hellkite). Hipp's deck shows us a mix of different kinds of interactive cards, from bomb-topdecks like Bonfire of the Damned and a very different kind of X-spell in Sphinx's Revelation to four different kinds of main-deck permission spells across Dissipate, Essence Scatter, Izzet Charm, and Syncopate. 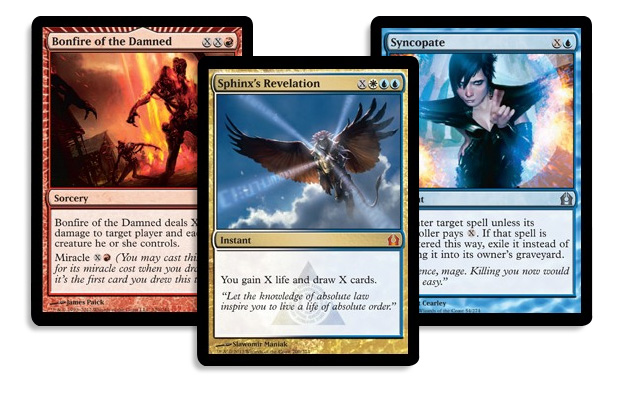 Beyond that, it has tons and tons of ways—different ways—to interact with creature cards; Pillar of Flame and Detention Sphere are both very good against the red-hot Gravecrawler and Geralf's Messenger. Searing Spear is a great anticipator of Hellriders. Azorius Charm and Feeling of Dread can take the hasty oomph out of even a Thundermaw Hellkite while you set up to do something else (like, in this deck, race with your own Thundermaw Hellkite).

The champ's deck can obviously put pressure on the opponent offensively, challenge and outclass defenses with its Thundermaw Hellkite big game, then finish games from a distance with its burn suite. Unlike single-minded offensive decks, Hipp's can refill or rebuild with Sphinx's Revelation, deal with mobs of creatures with Supreme Verdict, or even put control opponents into a real puzzler via Curse of Echoes.

Imagine you are a control player and you have just had the misfortune of being Cursed in this way... What exactly are you supposed to do? Say your deck is meant to run on a sequence of Sphinx's Revelations, or can't really get through the game without a flurry of Azorius Charms and both sides of a couple of Think Twices. Your whole goal in life is running through your deck to find the right cards or to achieve victory, eventually, by having a massive ton of resource advantage... more cards in hand leading to more lands in play leading to more mischief, various.

What exactly are you supposed to do once Cursed?

Really hope you have some way to get out from under the Curse, I'd wager.

Bauer played a similar-strategy deck, but with some key innovations that you might not have seen before (at least not in the Red-White-Blue Midrange archetype):

Gerry Thompson has quietly put together a superb run in recent weeks. One of the original best grinders of the StarCity Open Series, Gerry's previous two weeks saw him posting superb finishes in consecutive Standard Grand Prix events, and he has continued the Standard streak at the TCGPlayer Invitational.

Although also red-white-blue, and also (at least somewhat arguably) "midrange," Gerry's deck from this event is really more of a White-Blue Flash deck touching for Pillar of Flame than it is similar to the previous two performers.

His creature base is all value enters-the-battlefields. Augur of Bolas is going to "hit" the majority of the time given twenty-two available playmates main, and Snapcaster Mage is close to being at its best in a deck with so many Thought Scours, Pillar of Flames, and other such super-cheap cantrips and answers.

This deck can put up an iron wall of counterspell defense against an opponent that will give it time to make its land drops or go on a machine-gun murdering spree of completely dead Gravecrawlers as it dances between Pillars, Augurs-for-Pillars, and Tiago-flashed-back-Pillars. Like a traditional White-Blue Control deck, Gerry's red-splasher can reset the board with Supreme Verdict, then bury an opponent in (further) card advantage via Sphinx's Revelation. Trying to play a "fair" or progressive card economy game with it is fairly pointless. I would differentiate this from the potential flexibility of the above Red-White-Blue Midrange decks as not so much flexibility, but the ability to actually specialize in different lines of focused redundancy, actually molding distinct superior game plans depending on how the opponent is trying to win.

Gerry's ability to perform at a super high level three weeks in a row draws heavily from picking a strategy that allowed him both familiarity and the ability to contend against different kinds of opponents in a shifting field.

Restoration Angel is a big game that doubles up his other enters-the-battlefields, and Runechanter's Pile can be played as a one-shot. It is like the Fireball he has to find... eventually. Thompson could pick a spot and kill the opponent from double digits (there can be quite a few instants and sorceries in the graveyard, remember). Unlike most decks of this color combination, Gerry played Moorland Haunt not at all, preferring to go over the top with Sphinx's Revelation rather than trying to grind down the opponent's resources and poke for 1 every so often.

Medanic played a substantially different Bant deck from the one we recently saw Reid Duke pilot to back-to-back Grand Prix Top 8s. This deck is built on a more traditional deployment of permanents, although it does include the one Nephalia Drownyard and the one Overgrown Tomb as an inevitability combo.

Restoration Angel does work with Thragtusk here and can get the odd grimace of exasperation out of an Acidic Slime combo, as well. Angel of Serenity does what it can do in reanimator strategies... it just has to be cast fair-and-square (seven is not "too much" for a lady of her quality, she would have you know).

Rhox Faithmender is a card several top players have been discussing, and it can either buy a lot of time against, or undo the card usage of, many sorts of aggressive decks if left on the battlefield. Rhox Faithmender by itself can play the Little Engine That Could, kind of erasing a Pillar of Flame every tussle... but combined with Thragtusk? You need to get in with Thundermaw Hellkite twice just to get back to even!

Werner can still start on Arbor Elf and Avacyn's Pilgrim, but he doesn't actually have a Loxodon Smiter or a Centaur Healer for turn two. With only one Restoration Angel, his ability to unlock the Thragtusk achievement is less frequent (if still there). I do like the one Sigarda, Host of Herons for the "fight fair" portion of the deck.

On the other side, those little 1/1 accelerators work very nicely with Werner's abbreviated Craterhoof Behemoth theme. He can still Grisly Salvage and Mulch into Lingering Souls, Unburial Rites, and hopefully the 5/5 Overrun... at which point the Elves and Pilgrims and 1/1 Spirits all get pretty exciting.

I would put this still on very much an "Unburial Rites" deck with an eight-pack of graveyard-filling sorceries and the full complement of Rites, although it is no "Craterhoof Combo"—despite having the potential combo-kill capability. More of a tweener.

3 Huntmaster of the Fells 3 Slaughter Games

The Four-Color Reanimator deck generally differs from the Junk cousin in its ability to play Faithless Looting. Faithless Looting can help set up many of the Unburial Rites big game strategies starting on the first turn, and the flashback cost is even set up to come in right before you hit four mana for a cheap-side Unburial Rites.

Fulop's deck takes advantage of the slightly greater amount of into-the-graveyard oomph with four Angel of Serenity, although he plays "only" two Craterhoof Behemoths as well.

That said, red gives Chris some nice options, including Huntmaster of the Fells, for his fair-side curve (what Zombies player is going to want to face Avacyn's Pilgrim into Centaur Healer into Huntmaster of the Fells into Thragtusk?)... as well as Slaughter Games out of the side. Slaughter Games is gaining respect with its ability to exploit the information revealed by Jace, Architect of Thought and take the considerable gas out of Sphinx's Revelation's somewhat ponderous tank. It can also be quite useful against an opposing Reanimator deck; both when you think you'll have the time to spring it before you get walloped and in games where you have no intention of winning a progressive card-advantage fair fight. Why fight that fight at all?

Despite back-to-back Grand Prix wins by essentially the same Black-Red Aggro strategy, that combination of Hellriders and Zombies was not the one that made Top 8 in the TCGPlayer Championship.

Petrilli's deck plays a fair number of the same cards, but has a unique sub-theme: Sacrifice. 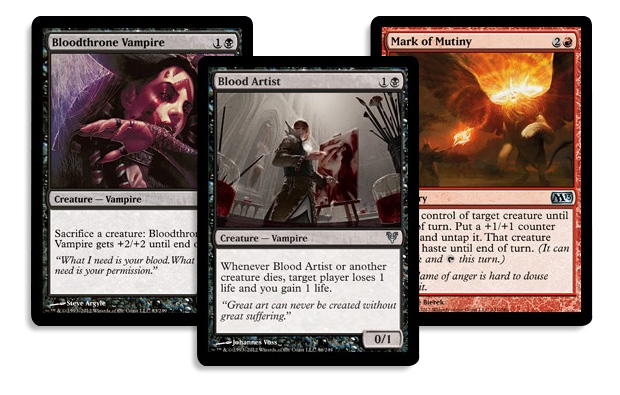 Mark of Mutiny shines here: You can steal something and never give it back! Falkenrath Aristocrat and Bloodthrone Vampire play for keeps—or at least to keep a 3/3 token—when stealing and smashing with and generally ruining the day of... Thragtusk.

"Me too. ME TOO!"
—Zealous Conscripts

You are not likely to see a more creative contender than Chris Bezinger's Peddler deck:

Using eight spells only to ramp and set up creatures, Bezinger's deck is almost mono-men... but men with not one, but many twists.

Players seem to agree on the primacy of Thragtusk in Standard. What is better than Thragtusk? EVEN MORE Thragtusks! In fact (in the case of Evil Twin) Thragtusk-dominance and assassination.

Zealous Conscripts is great, and in particular great against ultimate Planeswalkers, especially when powered out by Cavern of Souls. But as with a certain black-red build, Chris can pair Zealous Conscripts with Falkenrath Aristocrat for additional shenanigans.

Izzet Staticaster certainly has a lot to shoot at in Standard. In this article alone we have catalogued viable decks playing Arbor Elf, Avacyn's Pilgrim, Falkenrath Aristocrat, Gravecrawler, Lingering Souls, and more! Izzet Staticaster is like a flashy, hasty Royal Assassin in the right room.

But with Nightshade Peddler?

The two-card combination is probably obvious. The Izzet side can pop out at any moment, giving you a free hit or two in case the opponent exposes a creature he or she might not otherwise. Evil Twin is devilishly good sometimes, but it is tough to find a more malicious murderer of Thragtusks than this combo.

Standard has become overrun with tough haste creatures. Black mages have re-thought their Dreadbores for Victim of Night and red mages have reincorporated Searing Spear for Hellriders. The Peddler-pinger twosome doesn't care if you're a Devil or a Dragon. When it comes to murder, it's always appropriate.

You can do all different kinds of stuff and succeed. It's the Wild West out there! Luckily, this format will give the right mage a six-shooter, and every mage many, many choices.

Which one do you plan to send to Friday Night Magic this week?