The World According to Diabolic Edict

We don't really focus on that side in this column, but Grand Prix Las Vegas was, of course, more than worth a mention for its many virtues—not just size, but players everywhere have been talking about how much fun they had.

Because of that, and because I just wanted to call out the inspiring visualization work of James Arnold, I just thought I'd call your attention to this excellent infographic: 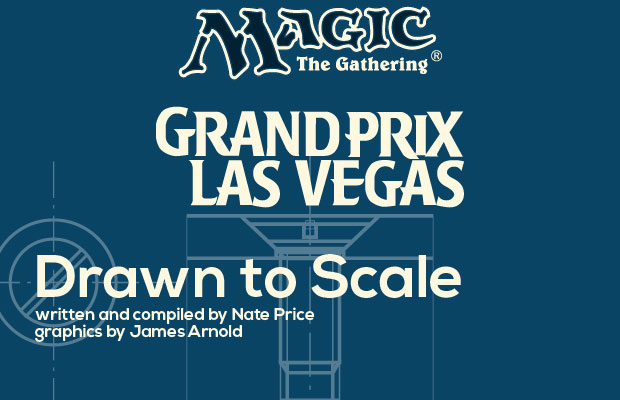 So... back to Constructed!

While thousands of players were opening Tarmogoyfs and Melokus in Vegas, Standard saw a fairly unexpected shift in Philadelphia, PA:

Esper Control! Junk Reanimator, sure; we've seen many aggro decks similar to this spread of Gruul, Jund, and Naya... but not only did StarCityGames's Philadelphia Standard Open Top 8 feature Esper Control as the overall winner, but it was the only strategy to post two finishes at the single-elimination tables!

As we have looked at decks like Junk Reanimator to no end in Top Decks over the past couple of months, I will instead focus on the two Esper Control decks, BG Midrange, and a strategy that I think still doesn't see enough attention—Four-Color Reanimator.

...all that, and a returning wink from a member of the Pro Tour Hall of Fame!

Top 8 competitor Lloyd Kurth played an Esper Control deck with a number of varied strategies. He played four creatures, a ton of different spells, and even one Planeswalker!

Seventeen of Lloyd's twenty-eight main-deck spells deal with creatures; they put attacking creatures on top of their owners' libraries, sweep many creatures at once (Supreme Verdict or Terminus), point at creatures already on the battlefield to destroy them, and (with cards like Renounce the Guilds and Far & Away) can force opponents to sacrifice creatures.

In addition to these many anti-creature spells, Lloyd played permission like Dissipate or Syncopate to counter creatures that can deal with a wide variety of cards.

The finishers in this deck are notable. Lloyd played "only" four creatures (of which only one is a heavy-hitting Ætherling), but he also ran the Nephalia Drownyards you might expect from these colors. Nephalia Drownyard gives Esper inevitability against the infinite life of more than one Standard strategy; given time, Esper with this card can run essentially any opponent out of cards.

That said, you don't really need more than the one Ætherling if you plan to draw it. What can kill an Ætherling if you're paying attention anyhow? Ætherling plays offense/defense in the vein of Baneslayer Angel. You can attack with it (hitting pretty hard) for 8 and/or make it disappear... and lo and behold...Ætherling reappears to block or discourage future attacks!

All that said, Lloyd played a second Ætherling in his sideboard, plus several copies of Evil Twin. If you haven't played with Evil Twin yet, it is kind of a Clone-plus. You can copy the opponent's Thragtusk (or Boros Reckoner, or whatever) and kill as many of those as the opponent plays; of course you get to keep your own copy, as well. Undying creatures like Strangleroot Geist or Geralf's Messenger can be awesome with Evil Twin; you can slay some opposing creatures, block to trade, and then reset with a +1/+1 counter—super powerful against good creatures.

One thing you might have picked up on in this deck is Oblivion Ring. Isn't Detention Sphere just better? Especially when you are already blue as well as white? Well, as a gold spell, Detention Sphere is a full-on nonbo with Renounce the Guilds. Oblivion Ring might provide a little less upside, but it plays well with others.

Open winner Rob Seder played quite a different Esper Control deck. While the deck played lots of Planeswalkers—three Jaces, a Sorin, and a Tamiyo—in a kind of Esper Superfriends configuration of fours and fives... he played just as many creatures as kind of a wink to Flash.

This deck is hell on creatures. Azorius Charm, Cyclonic Rift, Far & Away, Terminus—unless it's one of two Dissipates or one of the deck's card-drawing spells, it probably kills creatures. Interesting are the use of the full four Far & Away and the full four Terminus.

Far & Away can play quite like a sweeper. It can potentially handle multiple creatures (and the "Unsummon" half is as good as a removal spell against, say, Advent of the Wurm)... but is one-sided. Unless, of course, you don't want it to be one-sided. Forcing the opponent to sacrifice a creature while bouncing your own Snapcaster Mage is absolutely sick/depraved/disgusting/quite strong.

And then there is Terminus over Supreme Verdict. Supreme Verdict is great in a lot of ways: opponents can't counter it... it only costs four... but it is also a mite unreliable if the opponent has the right protective tools. Rootborn Defenses and Boros Charm both "Counterspell" the supposedly uncounterable Supreme Verdict effectively.

But not so, Terminus.

Terminus might cost more mana (six) retail, but a deck like this one, with its Think Twice, Azorius Charm, and Sphinx's Revelation, will allow Seder to set up a sweep for only one mana a fair amount of the time. More importantly... given the regeneration on Lotleth Troll, the Wurm-duplication of Rootborn Defenses, and the versatility of Boros Charm... it is a sweeper that can deliver even when the opponent's creatures are somehow destruction-resistant.

Rob chose not to play Supreme Verdict even in his sideboard; instead, he went with Planar Cleansing. Planar Cleansing allowed him to fight opposing Planeswalker decks as well as providing a catch-all for noncreature permanents like artifacts or enchantments.

One thing that struck me is how focused Seder was on Edict effects; in addition to Far & Away he played both Devour Flesh and Tribute to Hunger in his sideboard. These cards give a removal-based deck relevant resistance to hexproof creatures like Geist of Saint Traft that are not normally targetable by point removal.

1 Garruk Relentless 3 Liliana of the Veil

Kilmartin played a combination of removal and resilient creatures. Again we see a large spread of removal... Abrupt Decay, Putrefy, Tragic Slip, Victim of Night, and the big one: Mutilate.

The deck has fast removal in Tragic Slip and can hit a wide variety of permanents with Abrupt Decay and Putrefy, and can either sweep with Mutilate or force sacrifices with Liliana of the Veil's -2 activation. Again we have a deck whose removal can interact with hexproof creatures.

The defining characteristic, of the creature counts at least, is their resilience and therefore synergy with Mutilate or other sacrifice. Geralf's Messenger and Thragtusk both sort of live through a Mutilate; or they can also catalyze Disciple of Bolas while still leaving a body.

The BG Midrange/Rock deck is as close to a competitive "Swamps matter" as we have seen in Standard despite the legality of both Liliana of the Dark Realms and Mutilate. The payoff here is that you have both black-intensive threats like Geralf's Messenger (at

) and cards that literally require Swamps in play (Mutilate) in a context of many black-intensive cards... ideally you are getting enough punch to counterbalance the sacrifices made on the color side.

And on the other end we have a deck that actually adds an extra color!

This deck makes strong use of Faithless Looting. It uses Faithless Looting to set up its graveyard for Harvest Pyre (another combo with Boros Reckoner) and flips Lingering Souls to set up flashback as well. Alongside Mulch and Grisly Salvage, the Faithless Looting portion of the deck puts into the graveyard either creatures or Unburial Rites (for the flashback). And the payoff for those... largely Thragtusk, but really, really Angel of Serenity.

The Four-Color Reanimator has quite a few one-of threats: Gisela, Blade of Goldnight; Olivia Voldaren; Assemble the Legion; and more! The big one in the main, though, is Sire of Insanity. Sire of Insanity is powerful in many contexts (especially against control decks) but this deck—which has so many ways to exploit its own graveyard—takes a little less collateral damage than many other Sire strategies.

And in order to resolve that, there is even a Cavern of Souls to outmaneuver Dissipate.

Of the decks we are looking at in Standard today, Four-Color Reanimator seems to have the most going on proactively; it can play like a combo deck, or like another combo sort of strategy, or it can just try to get big creatures in play. It can lock down the opponent's hand or remove creatures. It can even disrupt the opponent's setup with spells like Slaughter Games or Purify the Grave in the mirror.

And from the Pro Tour Hall of Fame...

A little while back, we talked about Frank Karsten's World Magic Cup Qualifier run, with an all-creatures Naya Blitz deck that played no sideboard at all.

Frank updated his list and is tearing up the Magic Online queues. You'll notice that he added a couple of Firefist Strikers... as well as a sideboard!

But, being Frank Karsten, his sideboard is fifteen one-of cards.

Now Naya Blitz is a known quantity. This deck is perhaps the most purely aggressive in the format. It is about playing guys, buffing those guys, and committing to the board to set up the battalion on Boros Elite or Frontline Medic. It is about busting through with Ghor-Clan Rampager.

Although a simple strategy—purely aggressive—Naya Blitz can take you down many different paths, and it is a cerebral deck in that it presents many opportunities to make decisions and set up lines from as far back as the first turn.

So what's going on here?

I asked Frank about one thing in particular: He has a sideboard now; what is the most unusual card in it?

Frank had a great answer as to when you play it. Frank wants the twenty-first land on the play (to enable more aggressive mulligans) but only twenty on the draw. His curve is generally quite low, so he can handle playing only twenty lands... if he draws an eighth card.

This might seem like a small thing, but it is so instructive to have a master let you peer into his thought process.

But more importantly? Naya Blitz is still a strategy despite the general move toward the ground-holding Loxodon Smiter and building to slower advantages like Domri Rade or Garruk, Primal Hunter in Naya decks. In fact, if Esper Control is holding off some of the Boros Reckoners in the room, Naya Blitz can be the beneficiary of a less Minotaur-intensive metagame.

Don't call it a comeback.