Your Destiny Has Been Chosen 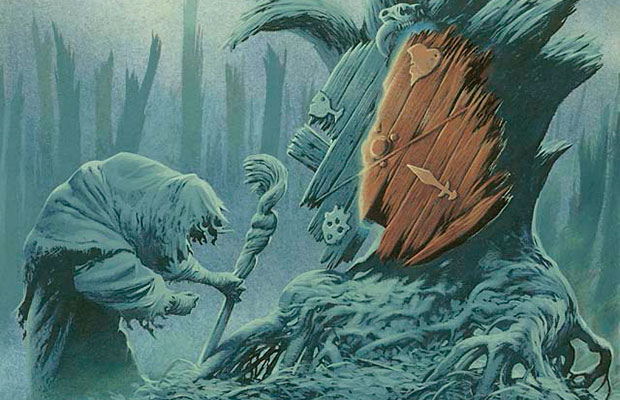 The idea that all choices are merely illusory is unsettling. That everything—from birth through death—is predetermined by the Moirai flies in the face of what many of us perceive. Not that it'd be inconvenient to lay blame for all our Magic losses at the feet of the Fates, but it's much more likely that we're the ones making all the mistakes, not a pseudo-godlike triumvirate.

However, we don't live on Theros. 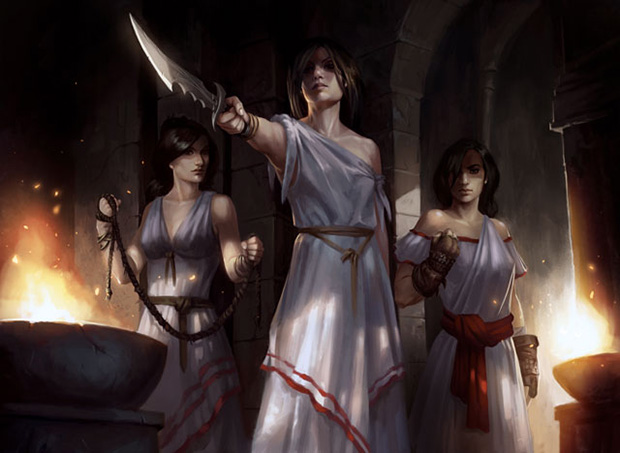 Theros is packed with plenty from Greek mythology, including its own riff on the ancient three that even the gods were beholden to. These are the Fates that look upon Theros: 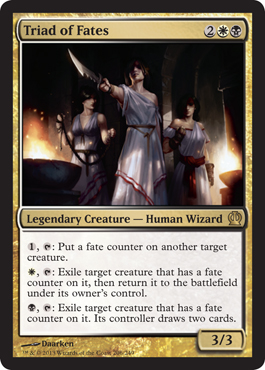 Being in Theros was clearly destiny.

Triad of Fates, from where I sit, is modeled exactly from the Moirai of Greek legends:

While the ancient Greek take on the Fates is far broader in their reach, Triad of Fates is intentional and deliberate (and a bit more fair). In fact, the Oracle of Theros confirmed the Fates can be overcome.

But I don't see why we wouldn't just put the Fates to work for ourselves. That's the beauty in choosing a creature like Triad of Fates as a commander: It's not all about finding the biggest maximum value, but exploring what a particular commander really wants to do.

Triad of Fates wants to manage the fate of the game, of course.

Building around a theme is a nebulous idea. There's no set recipe or fixed way to go about it. But there are a few tricks I've found to smooth out the process. For me, the biggest element of building around a theme is distilling the theme to a specific goal. It's easy to look at Niv-Mizzet, Dracogenius and think about building "a wacky deck of mad science" but it's almost impossibly broad to define what that is.

Triad of Fates is about one theme: controlling fate. I pivoted this into a straightforward goal: What are the things that interact with fate, in the Magic sense? 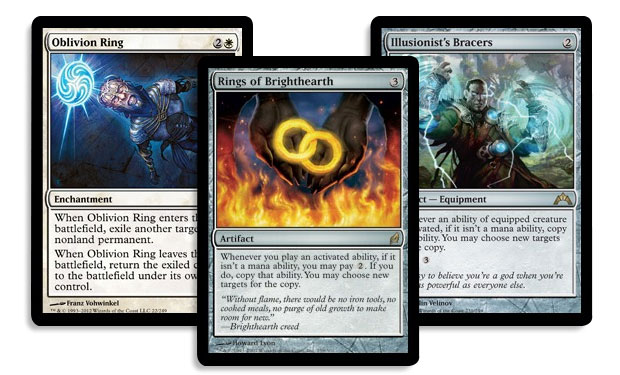 There's only one other card in the game that can put fate counters onto creatures: Oblivion Stone. It's already a handy way to wipe down the battlefield, but it now serves another purpose alongside the Fates. The usual activated-ability suspects of Illusionist's Bracers and Rings of Brighthearth also double up Triad of Fates's fate-counter settings. Since we're activating a creature, Lightning Greaves and Swiftfoot Boots speed fate along, although Ring of Valkas and Helm of Kaldra can do the same trick. 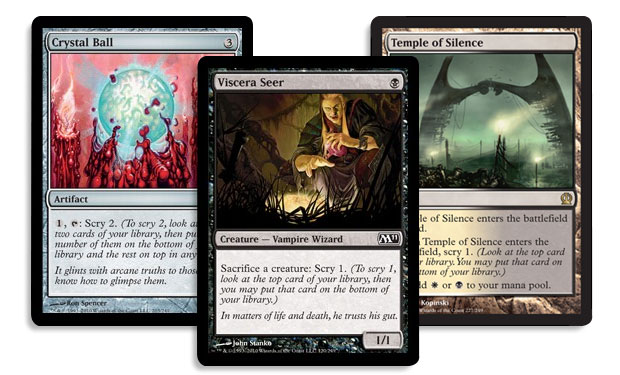 Knowing the fate of all things is what the Fates do, so things that let us scry into the future fit perfectly. Crystal Ball and Viscera Seer are classics that will fit alongside new ways such as Temple of Silence. Scrying Sheets is a fascinating way to peek, and by going all-in on snow-covered basic lands, Terrain Generator lets us control our mana in ways opponents often can't. 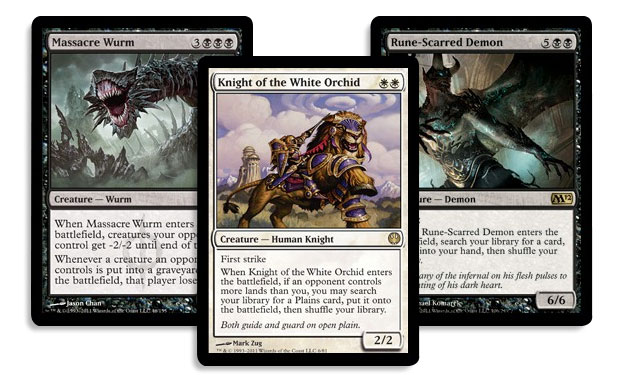 Controlling fate has its perks, among them the ability to tap into creatures that are already empowered. The destructive potential of Massacre Wurm is always handy, and so is the "catch up on lands" ability with Knight of the White Orchid. Rune-Scarred Demon is perhaps the new face of these types of value creatures, although Sunblast Angel and Aegis Angel are among my preferred choices as well.

That's part of what's convenient about honing in on the goal for a theme: it makes it easier to choose just specific cards among the many you like. Of all the sets of Orzhov Commander cards sent my way, all of them had something that fit the theme for Triad of Fates.

If a Commander deck runs both white and black I will put Angel of Despair into it. Destroying any permanent while getting a beater with evasion is excellent card value. I don't even care about Deathbringer Liege's ability to pump my field; turning every

card I cast into creature destruction is the epitome of efficient value. Teysa scares people away from attacking you. Single creatures get blocked while swarms get nuked. The Primordials were designed for multiplayer play, and Luminate provides excellent creature removal on a nice-sized body. Finally, Necropolis Regent just ends games if it sticks.

Angel of Despair fits in perfectly, as does the newest tweak on it: Ashen Rider.

Shriekmaw and Karmic Guide are very useful utility creatures that have great "enters the battlefield" abilities. Shriekmaw acts as either early removal or a solid creature later on. Karmic Guide doubles as a Reanimator spell (especially in conjunction with creatures three and four on the list) and a solid flier if needed. Elesh Norn and Sheoldred are top-of-the-curve, must-be-answered, game-breaking fatties that also serve as great Reanimator targets (something that Orzhov really likes to do). Teysa, I feel, would be a great Orzhov commander. She punishes creature-based opponents and can be very tough to deal with in combat.

While Oren's picks overlaps somewhat with the others, grabbing at the fate-controlling ability of Adarkar Valkyrie is just as flavorful and potent.

Who could forget Sun Titan? With its handy appearance in Duel Decks: Heroes vs. Monsters, the big titan that could is an excellent choice to getting back other things. I heard it's featured in powerful combos too. 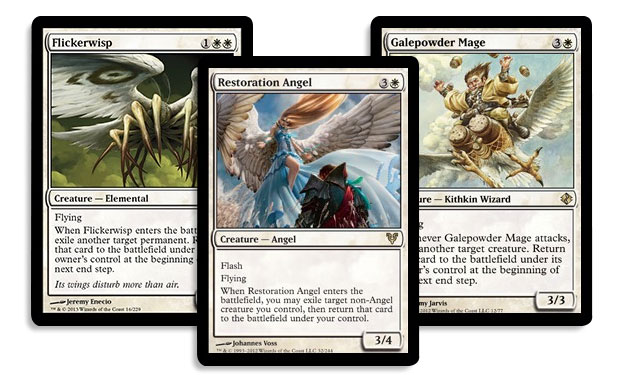 Triad of Fates can flicker the lives of plenty of creatures, but having some help along the way to pull it off can't hurt. Flickerwisp is great offensively or defensively, and the applications available with Galepowder Mage and Restoration Angel are obvious too. 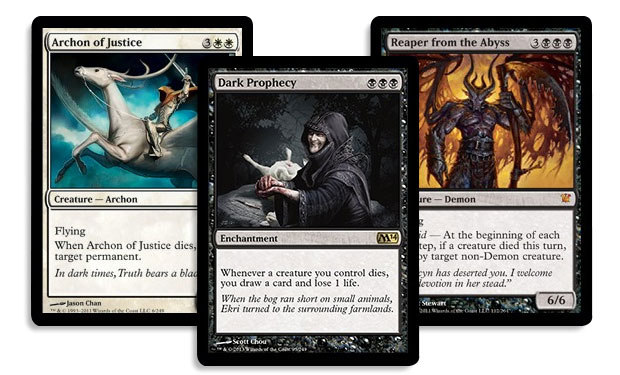 Of course, there's more to controlling life than just creating. The fickle Fates can end it just as fast, caring about death as much as life. Archon of Justice cares about dying, itself, and Reaper of Abyss is a loyal watcher of such events, but it's Dark Prophecy that tickles me here: predicting the death of something is much easier when you're the Fates in charge of things.

Going beyond the Fates for more ways to end the lives of creatures quickly leads to cards like Martyr's Cause; Attrition; and Vish Kal, Blood Arbiter paired up with the quartet of death-deniers in Nether Traitor, Tenacious Dead, Reassembling Skeleton, and Bloodghast. 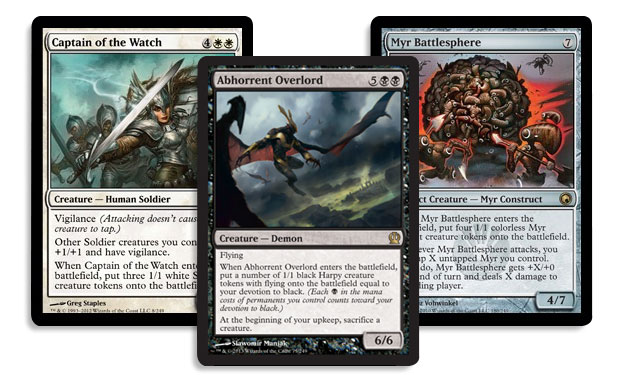 To make all of this life-ending business matter more, adding creatures that create more creatures will spread the love of fate counters that translate into drawing cards. Captain of the Watch and Myr Battlesphere make plenty of dudes in a hurry, but the upcoming Abhorrent Overlord makes just as much sense, too.

Grave Titan is another powerhouse token-maker to add to our mix, but creatures alone may not be enough. White Sun's Zenith; Increasing Devotion; Decree of Justice; Entreat the Angels; and even the new Elspeth, Sun's Champion will help us quickly bring life we control onto the battlefield (for all those dying effects we have thrown in). 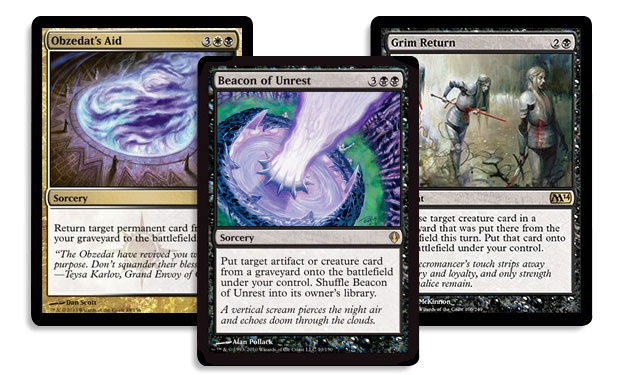 The ability to pull back that which has passed is also in the power of the Fates, and cards like Obzedat's Aid and Beacon of Unrest do it in style. Cashing in a creature that makes tokens, only to pull it back immediately, is a surprise opponents will learn to fear. More permanent ways to manipulate fate, such as Debtor's Knell and Cauldron of Souls, work well too. 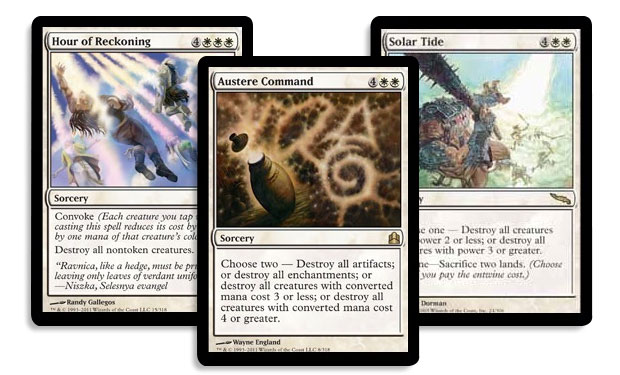 While the fate of individuals can be the source of stories, the Fates also oversee how entire battles play out. Cards like Hour of Reckoning, Austere Command, and Solar Tide give us choices that only the most chosen can overcome.

All said, following the flavor of the function of fate led me to combine your favorite Orzhov cards with my singular, focused theme.

Is Vish Kal, Blood Arbiter a "better" commander for this deck? Are there "stronger" or "more powerful" choices that can be made? It's very well true on both accounts. But what this deck does is follow through on its goal to influence and determine the fate of a game.

One of the questions I see pop up regularly is "Why did you choose so-and-so as the commander? Such-and-such is totally better in every way!" That better bit is a sticking point with me. Commander is meant for exploration and fun, with almost all of the legendary creatures in Magic around to make the most of things.

Whether it's the destructive power of Polukranos, World Eater or the clunky but explosive potential of Anax and Cymede, taking the time to discover what's hidden all across Magic is near-endless adventure.

It's simply fated to happen.

Up Against Your Will

While I don't place stock in any fate controlling our destinies, it seems there's always some new challenge facing us in life. Commander seems no different, and each week, difficult situations end up in my inbox.

What I mean by difficult situation is one where a conflict happens in a game, and players end up dissatisfied as a result:

There are innumerous situations like these. I'm not interested in the situations themselves, but your successes in solving them. What's a difficult situation you encountered playing Commander that ended up being solved by the group?

Remember, having a situation isn't enough—we all have problems—but having a problem your group solved is what I'm after.

Join us next week when we go for the Gods and all their fair minions. See you then!