Zombies Rising (to Tier One)

elcome to the latest edition of Perilous Research. Last week, White-Blue Delver strategies posted impressive results. Newer strategies like Green-Blue-Black Zombie Pod and Infect were attempting to do some damage to Delver's reputation, but Delver remained on top by virtue of the sheer number of pilots. We revisit Standard this week and find that the format is significantly less homogenous than it was last week. Delver remains the deck with the most undefeated records, but Zombie variants are storming their way into the spotlight.

Delver decks are becoming more refined for the mirror match and many list are beginning to go back to one or two copies of Gut Shot. This has allowed players who like casting Llanowar Elves and Birds of Paradise to pick up Red-Green Aggro or Naya Pod and enjoy a certain degree of success again. 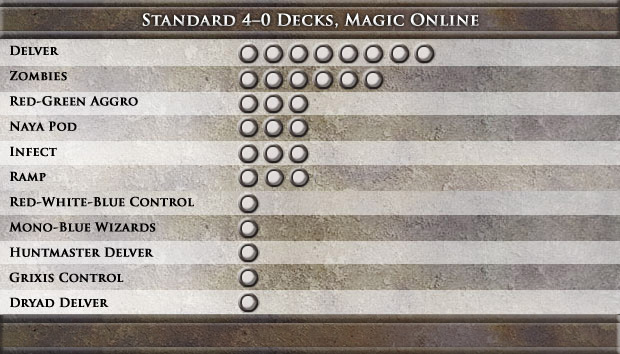 It's finally looking like Delver has begun loosening its grip on Standard. Since the release of Magic 2013, Delver has managed to post daunting numbers every week. Last Saturday's results are a huge step away from the White-Blue Delver metagame. Delver became so popular last week that many Delver pilots started using Talrand, Sky Summoner as a mirror-breaking four-drop. CharLy piloted an interesting White-Blue Delver list to an undefeated finish last Saturday. CharLy's list is packing four copies of Gut Shot, putting him way ahead in terms of tempo against the aggressive green decks in the format like Red-Green Aggro and Naya Pod. Geist of Saint Traft is the three-drop of choice these days, dishing out the most damage for the least mana. CharLy gets improved value out of his Geist of Saint Traft by playing two copies of Feeling of Dread. Delver wins a lot of its games by simply keeping the opponent out of the game entirely. Having access to a card like Feeling of Dread will, no doubt, make this version of Delver a nightmare for any deck that wants to tap out for creatures on the fourth and fifth turn. Here's a look at the latest version of Delver; don't be too surprised when your opponent blows you out of the game with Feeling of Dread this weekend:


Zombies has solidly established itself as the other tier-one deck of the post-Magic 2013 Standard format. Green-Blue-Black Birthing Pod versions of the deck were performing well the past few weeks, but more aggressive black-red versions of the deck seem to have done significantly better this week. Noticing a declining number of Gut Shots in the average Delver list, many Zombies players have gone back to playing Porcelain Legionnaire; 3-power first strikers for two mana are actually good. The black-red removal/burn suite is strong enough to punish Delver players for using too much Phyrexian mana. The deck is also capable of simply racing a lot of draws with its eight 2-power creatures for one mana. Daddyl1's Black-Red Zombies list looks particularly interesting to me. Questionable inclusions like Highborn Ghoul and Porcelain Legionnaire have been replaced with a surprisingly effective Magic 2013 two-drop, Knight of Infamy. Daddyl1 also included a few copies of Flames of the Firebrand—a burn spell that's capable of raking in huge amounts of card advantage when used at the perfect moment.

1 Bonfire of the Damned 3 Flames of the Firebrand


Infect had a fine week. I expect the deck to have reasonable success until rotation, but it's going to be difficult for this deck to get really great numbers when Delver is so popular. The latest Infect strategies attempt to combat their less-than-stellar Delver matchup with main deck Spellskites and Mental Missteps. These are helpful tools for battling Delver of Secrets, but these cards also make the deck less focused on killing its opponent. Gorman87 found a nice balance of Delver defense and ways to kill people with his 4–0 list. I don't think this deck is a favorite against Delver, but it's a lot more even than you might expect. Infect's exceptionally strong matchup against every other established archetype makes the deck worthwhile, even in a world dominated by Delver. Here's a look at Gorman's list:


Sometimes, I just want to jam all the best cards together into the same deck and see how it goes. While conventional wisdom might tell you that issues of consistency are too important, there's something very special about having Huntmaster of the Fells and Snapcaster Mage in the same deck. (Think about it... insane right?!) One of the more interesting decks to go 4–0 in last Saturday's dailies is vidivici's three-color Delver deck. This deck is an excellent choice if you want to play something with a high raw power level. Consistency might be an issue, but it might just be worth it. Take a look at vidivici's list and decide for yourself:


HiKiKomoRinGo managed to 4–0 a daily event last Saturday with a very impressive Grixis Control deck. This deck uses efficient removal like Doom Blade, Go for the Throat, and Whipflare to get to the stage of the game where it can begin resolving Consecrated Sphinx or Lone Revenant. Temporal Mastery really shines in a deck like this. The deck uses Think Twice to grind out a bit of card advantage and takes advantage of Desolate Lighthouse—a rare land from Avacyn Restored that hasn't begun to reach its full potential just yet. This archetype can be built to have a very strong Delver matchup and it probably performs well against most other non-Ramp strategies as well:


Ramp was good enough for a number of players—including Martin Juza—to play it under the bright lights of Indianapolis this past weekend. This deck has been quietly doing well in many live events, but its numbers aren't quite there on Magic Online. This week, however, there were three different Ramp decks that managed to have undefeated records. Most Ramp players these days are playing blue to have access to Temporal Mastery, Frost Titan, and Phantasmal Image. Reid Duke popularized this version of the archetype a few weekends back. The deck looks similar this week, and it's finally starting to be seen on the scoreboard of Magic Online:

3 Bonfire of the Damned 4 Ponder 2 Pillar of Flame

Delver lists are already beginning to revert to their spell list from last week. I would not play green decks that rely on Birds of Paradise and other one-mana accelerator creatures in the coming week unless you're very prepared for the Delver matchup. Black-Red Zombies is a great choice because of its strength against Delver. If you're experiencing a lot of Delver and you want to do well against it, specifically, then I recommend playing one of the Grixis Control decks that play four copies of Whipflare. I recommend playing Infect if you're lucky enough to play in events that don't have much Delver (which is less than 25% of the field).

It has been a few weeks since I've tackled Modern. Modern is quickly becoming one of my favorite formats. My thirst for Modern action was only augmented by the excellent coverage of the World Magic Cup this past weekend. Modern is diverse in its current state and the decks all seem strange enough that just about every game should feel drastically different.

We'll start by breaking down the undefeated decks from last Saturday's daily events:

Modern has been gaining a lot of popularity this last week. Modern forums have been abuzz and everyone seems to be networking to try and build the next format-defining archetype. It's difficult, though, as the format is so wide open that finding a single deck that beats everything seems like an impossible feat.

There is one archetype that seems particularly strong, though. Pyromancer Ascension has become a format staple, and the archetype has proven itself to be the strongest combo variant available in Modern. These decks continue to perform well, but not having access to Ponder or Preordain is a pretty big issue and the deck can lose a lot of matches to itself. I've always been a huge fan of combo decks and I'm particularly fond of Pyromancer Ascension decks.

I feel like Pyromancer Ascension is a powerful lesson for deck builders everywhere. The enchantment was ignored for almost a year; it sat as a coaster and no one expected it to do anything. Then, out of nowhere, a brilliant deck designer reinvented combo and the Standard format was drastically changed as a result. In Modern, the deck is more streamlined than ever. It's capable of winning as early as the second turn, and it's not unusual at all for the deck to win through a Spell Pierce on turn three, or through multiple disruptive spells on turn four. Let's take a look at Modern Pyromancer Ascension:

2 Empty the Warrens 3 Past in Flames
59 Cards


Modern is still wide open and there's a lot of room for new decks or improvements on existing archetypes. This is the perfect format to get involved in if you're looking to build your own deck with the intention of playing competitively.

As always, be sure to shoot me an email or leave me a message in the forums with questions, comments, or suggestions on how you feel this column can be improved. Be sure to tune in every Thursday for up-to-date metagame analysis. Next week, I'm going to compile a bunch of Magic Online Legacy data and bundle it up nicely!