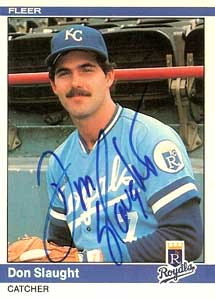 I'm not sure why I specified magicthegathering.com. I guess you never can tell if some other web site will simultaneously devote a week's worth of content to a long-retired journeyman catcher and I don't want there to be any confusion about what site you're currently browsing. If you weren't sure, it's this one.

I agree that it seems odd to dedicate an entire theme week to a fairly obscure Major League baseball player. I can only assume that we did it because several members of R&D have ties to Pittsburgh, the city where Don Slaught spent much of his career. If this marks the beginning of a trend, I look forward to theme weeks covering other forgotten athletes, such as judo master Amir "The Thinker" Rodin, sharpshooting biathlete Cody S. Sey, and the 1968 Olympic pole-vaulting champion, Abe Trayersofkamigawa. Are these theme weeks on the horizon? Only time will tell. Also, no.

Now the question becomes, "How does one go about building decks based on a baseball player?" Well, it might seem like a stretch, but I'm going to suggest that teams are like tribes. Heck, the Major League team from Cleveland is nicknamed "The Tribe." Extrapolating further, a team like the Toronto Blue Jays could be represented by a Bird theme deck, the Baltimore Orioles by a, uh, Bird deck, and the St. Louis Cardinals could, um, also be represented by Birds. Okay, I hope Don Slaught played for a more diverse group of teams, like the Soldiers, Beasts, and Rebel Clerics. I'm a wee bit sad, because I know going into this little experiment that there's no Major League Baseball team called the Elves. Maybe there should be one, though. At the North Pole.

Tribal decks have been featured many times in this column, since House of Cards was in full swing the last time we had a "tribal" block. Who knows if or when we'll ever have another one? For now, let's see if some of these old tribal dogs can pull off some new tricks. I hope these decks tide you over. Store them in your humps, for your potentially long journey across a vast, range-striking desert, devoid of life and, perhaps, tribal decks. If you don't have any humps, store them in your hard drive. 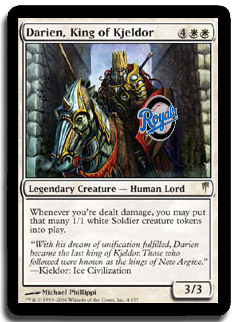 A 22-year-old Don "Sluggo" Slaught made his Major League debut with the Kansas City Royals in 1982. After three years in KC, he was traded to the Texas Rangers. Three years after that, he was in New York playing for the Yankees. The man rotates like Extended.

To build the deck, I'm going to start with the Royals, specifically with Darien, King of Kjeldor and his Kjeldoran Royal Guard. The former turns damage dealt to you into Soldier tokens, while the latter is a Soldier. It doesn't take a rocket scientist to figure out that I'm going to be making a Soldier deck. Good thing, too. I'm still a couple credits away from graduating.

Soldier decks are famous for their token producers, from Raise the Alarm and Mobilization, to newer ones like Benalish Commander, Goldmeadow Lookout, and the aforementioned King of Kjeldor. Besides the usual Soldier "lords" and "lordettes," like Field Marshal, Daru Warchief, and Catapult Squad, what's a good way to enhance your army of 1/1s while at the same time connecting to Don Slaught's tour of duty as a Texas Ranger? Survey says: Juniper Order Ranger was the number one answer.

Finally, if I were to tie Magic into the New York Yankees, I would probably turn to cards like Highway Robber and Spiteful Bully and, um, basically any other Mercenary. There are only two problems. One, those guys aren't Soldiers, and two, those cards are actually halfway decent. I can't in good conscience have the New York Yankee section of this theme deck be anything but completely miserable.

No longer a Creature — Squire, this guy is now a Human Soldier as well as one of the most maligned creatures of all Time Spiral. With all the Soldier-enhancing in the deck, your Squires will be able to pack much more than the usual vanilla 1/2 punch.

For this deck, I wanted to do something fun with Kjeldoran Royal Guard. I have the opposite of fond memories of playing against my brother's Veteran "George Clooney" Bodyguard, which was piled high with Holy Armors and protected by Combat Medics. (This was in my pre-Terror days, apparently.) In order to recreate some of that old school magic, that fragile invincibility, I decided to pair the Royal Guard with Molting Skin, which allows you to survive a creature onslaught of any size, turn after turn. Molting Skin also works well with some other recent cards, like Magus of the Disk and Tenth Edition's Loyal Sentry. Here's the final list:

Until I hit upon Molting Skin (or Broken Fall) via a Gatherer search, I was going to use Fanatical Devotion as my regenerator of choice. It seemed like it might be good with all the Soldier tokens I could produce, but it doesn't have great synergy with Magus of the Disk and it's much easier for your opponent to destroy. Yavimaya Hollow is probably the ideal regenerator, Kjeldoran Outpost is a great producer of Soldier tokens, and Ranger en-Vec is an on-theme Ranger that conveniently fits the colour scheme. Use 'em if you got 'em. 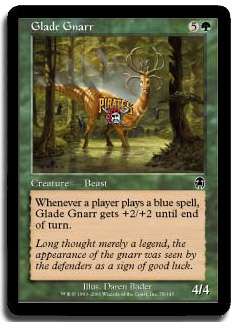 As I mentioned in the introduction, the man of the hour, Don Slaught, spent much of his career in Pittsburgh playing for the Pirates. That's somewhat unfortunate, because Pirate decks pretty much build themselves. Either they're clones of Mercadian Masques era land destruction decks, or straightforward blue aggro. Rather than tread on well-trodden territory, I built a deck around some creatures whose names only a pirate can say best: Gnarrs!

This deck was built using free association. I started with a combo I've been meaning to use in a deck for ages: Glade Gnarr + Shimmering Wings. The Gnarr gets +2/+2 every time a blue spell is played and Shimmering Wings can be played and replayed until your blue mana runs out. The aura also solves the problem 12/12 creatures with no evasion have with chumpblockers. It also works well with Bramble Elemental, which can make lots of tokens, which is great for the latest Gnarr, Time Spiral's Herd Gnarr.

I began looking for other cheap ways to pump Glade Gnarr repeatedly and eventually opted for Mystic Speculation. This led to another new Beast, Cryptic Annelid, a.k.a. Scryborg. With all the this top-of-library manipulation, I squeezed in some Bloodline Shamans, a Zoologist, and an Animal Magnetism. After that, I rounded things out with the usual mana-fixers and accelerants, some more Beasts, and a pair of One Dozen Eyes, which is particularly devilish with Herd Gnarr. This one isn't quite legal in Classic Tribal Wars, mostly because I wanted to include more stuff.

As you can see, I had to leave out Bog Gnarr. Later on, it occurred to me that you can pump up all three Gnarrs simply by playing a Cavern Harpy. The only problem would be the mana, but you could solve that by using Aluren. If you want some arbitrarily large Gnarrs (and who wouldn't?), I'd start there.

The Treasure of the San Diego Padre 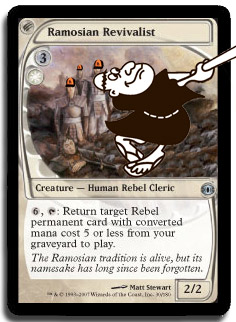 Don Slaught rounded out his Major League career with brief stints with California Angels, the Chicago White Sox, and the San Diego Padres. In terms of tribal decks, two of those teams can be easily translated. The Padres are Clerics and the Angels are, um, Angels. I'll get to the White Sox in a minute.

I began searching for recent Clerics with Gatherer and was a little surprised to discover that almost all of the more interesting ones were also Rebels—cards like Blightspeaker, Samite Censer-Bearer, Ramosian Revivalist, and Children of Korlis. The last two have a lot of synergy, allowing you to survive anything but a lethal amount of damage or life-loss. They're a lot like the Martyr of Sands and Proclamation of Rebirth combo, except, you know, way more fragile. The Revivalist can also recur sacrificed Censer-Bearers, vanished Aven Riftwatchers, and binned Bound in Silences.

Another fun card to combo with Ramosian Revivalist is Ashes of the Fallen. It'll turn all of your dead creatures into Rebels, meaning they can be revived for six mana provided they cost five or less. Besides the non-Rebel Clerics, I included a pair of five-mana monsters that have a lot of synergy with the rest of the deck. The first is Kiyomaro, First to Stand. Rebel searchers are great with the "Maros," since they allow you to add threats to the board without diminishing your hand size. I also wanted to use Minions' Murmurs for its compatibility with Children of Korlis (which lets you regain the life you lose) and Rotlung Reanimator (which can prevent you from coming up empty if your opponent has a sweeper like Starstorm). Minions' Murmurs also works well with Kiyomaro, especially if you can get up to the full seven, at which point the lifelink can negate the life lost. The other five-drop that I used is Fallen Angel, which covers the California Angel angle but is also a good fit for the deck. It can easily become lethal in conjunction with a Rotlung and a board full (or half-full) of Clerics.

I used Scout's Warning with Defiant Vanguard a little while ago, and it fits in here as well. Children of Korlis, Samite Censer-Bearer, Rotlung Reanimator, and Orzhov Pontiff are especially good when you play them as an instant in response to removal or in the middle of combat.

Oh, yeah, the White Sox. Check out the feet of Children of Korlis. They look white to me. All I know is I wouldn't want to be the Laundress of Korlis.

1 Ashes of the Fallen

Well, that about does it for this week. A man's sixteen-year career summed up in three decks. I don't know if that's a good thing or a bad thing. I do know that this was a weird theme week. I wonder if it means something. I guess only time will tell. Also, no.

Until next time, have fun with Don Slaught!