The Trickiest Vanilla Crab Ever

or a time during the creation of Legions, blue had this vanilla creature in its list of commons:

It was argued inside R&D that even at

, a drawback-free 4/4 was out of flavor for blue for a common card. To rectify this, it lost a point of power and had its mana cost shaved:

After further swapping went on in the set, there was no longer space in Legions for [Crag Crab]. But the art had already been commissioned from Ron Spencer: 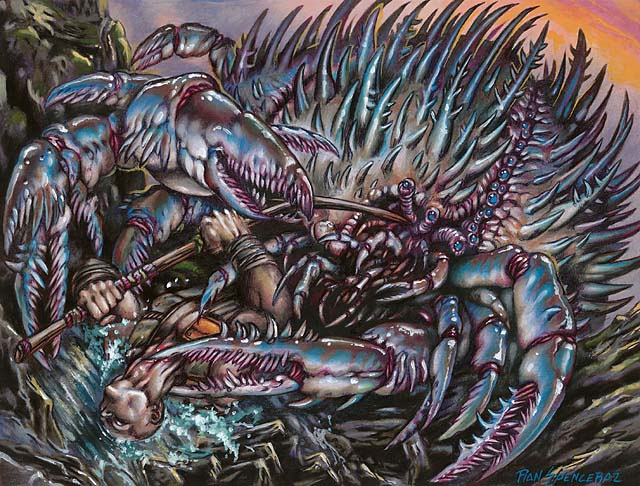 However, there was room in the set for a new blue rare creature. The following creature was proposed, with a tricky morph trigger ability:

[Bristleback Urchin]
4U
Creature - Beast
Morph 4U
When CARDNAME is turned face up, exchange control of target creature you control and target creature an opponent controls.
3/3

The art from the defunct [Crag Crab] was swapped onto this new creature. It went through a few more revisions -- a "you may" was added to the morph trigger, and the name was finalized -- and it became this card.

Chromeshell Crab -- which combines the creature-swapping abilities of Phyrexian Infiltrator with the surprise factor of morph -- started out as a vanilla 4/4 and ended up as one of the trickiest blue creatures in the game.