Today is the best day ever! Mama bought me a snapjaw egg at the market! I promised to take good care of it and clean up after it and make sure that it doesn't eat anything important. Snapjaws are the best pets! Lev had one, and nobody messed with him after that. We're going to be best friends.

Today, Kuba is three weeks old. He's gotten so big! Mama likes him because he eats the rats, but he eats pretty much anything we let him. He follows me everywhere and he's super nice. I feed him what's left over from my lunch and he licks my face. Alena's mad at me because she says Kuba ate her dog, but I know he didn't and anyway her stupid dog bit me yesterday so it would serve her right.

Kuba ran away. He chased something into the sewers and didn't come back. Mama says I can get another one, but I don't want another one. I want Kuba to come home. 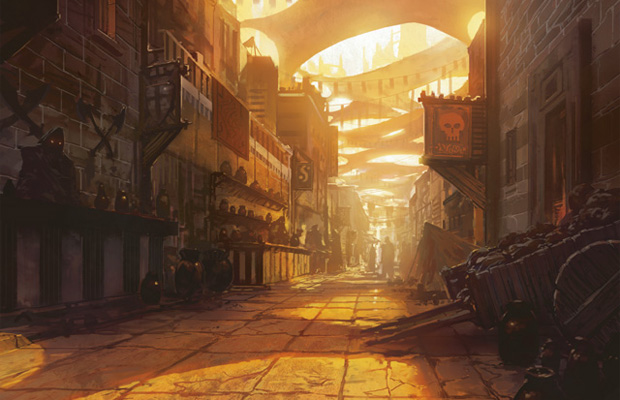 Sewage reclamation proceeding without incident. Three workers cycled during the past week, and two have returned. No net loss of efficiency in our sector.

A snapjaw made its way into the rot farm today, presumably from Above. It's been fighting and eating nonstop since its arrival. A couple of us have taken bets on how long it will live.

The snapjaw has gotten out of hand. It ate two of the workers, so we brought in a handler to put it to better purpose. Then it ate the handler. While I'm sure with sufficient effort we could put the beast to good use, I don't believe it's worth the effort and losses. I'm planning on having it herded through an outflow grate into Izzet League territory. Let it eat some of them. We've got real work to do. 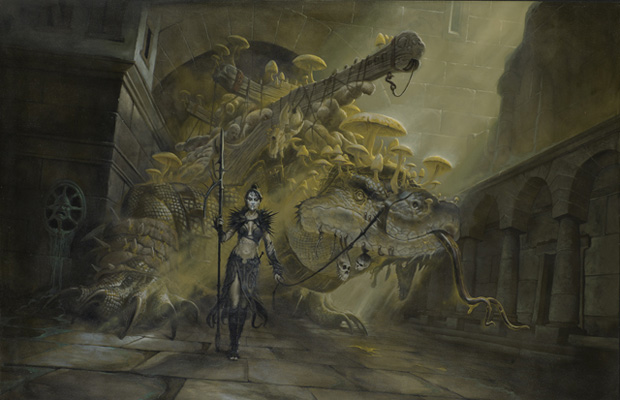 Background: Implementation of biomechanical augmentation systems have been historically hampered as the mental faculties of the implanted organism lack the instinctive neural pathways to handle the sudden integration of the new devices.

Question: Can a neuroamplification serum be applied to a subject in concert with an implanted mechanical augmentation in order to give the subject the ability to integrate the augmentation into its instinctive biological processes? 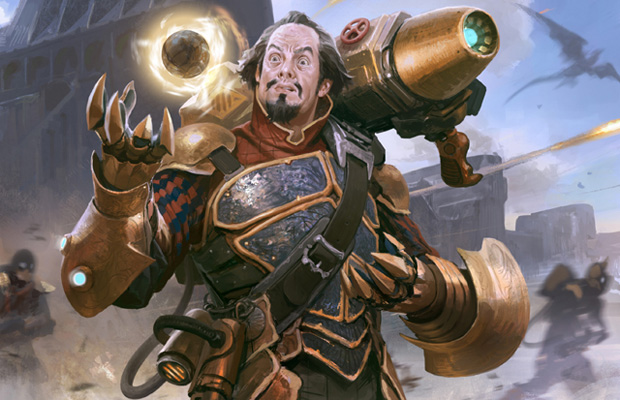 I am pleased to inform you of the results of a series of projects that have recently come to an end. As you have been notified, several weeks ago, we discovered a badly injured creature wading along the Northern Interior coast. We coaxed it into incubation in order to heal it, and an unexpected set of reactions began.

While I posit that the creature began life as a common snapjaw, it has certainly had an eventful life. Its enhanced size and musculature are consistent with creatures raised by the Golgari, while its reinforced skeletal system is clearly the result of malicious Izzet tinkering. We surgically excised most of those mechanisms, but could not remove all of them for fear of damaging its central nervous system.

I used a standard set of mixtures for the incubation chamber, but it seems that this snapjaw was destined for something greater than either its origin, or even I, had intended for it. It began to manifest incredible intellectual expansion, and whether through contamination, or, as I theorize, some sort of ideal internal to its own nascent consciousness—it began to develop approximations of humanoid features. I believe that it is on the verge of demonstrating sapience. My enthusiasm over this accomplishment is diminished only by the fact that I have no idea how I would ever replicate it.

You will, of course, be kept apprised of the subject's progress, although I intend for the subject's life and choices to become increasingly self-directed over time. 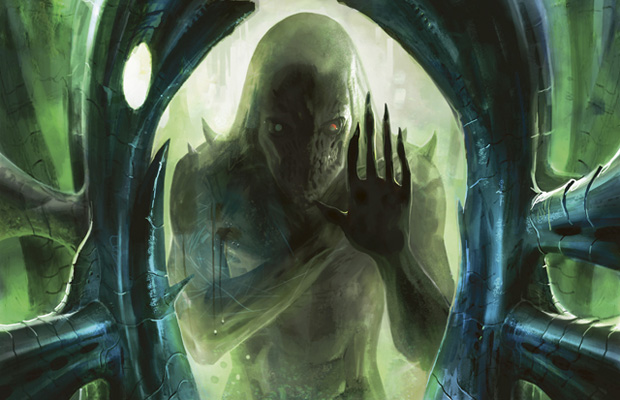 Stanisil has asked me to record my thoughts and feelings as I, and they, develop. I look at these hands, and I do not fully recognize them as my own. I remember the idea of hands, and I remember what my forelimbs used to be. Neither of those things are what currently grip this quill. I am frequently asked what I want, how I feel, and I do not know what to say. The Simic have taken exceptional care of me, and they treat me with respect. But it is their curiosity that I feel more than anything else. I am being studied, and I do not like it.

I am told that I have the freedom to go where I wish, and do as I please. The idea terrifies me. Sometimes, I want nothing more than to find a warm place in the sun. Everything feels so new.

There is another thing that my mind keeps returning to, but I hesitate to share it, even with Stanisil. There is an image of a human boy. I remember his kindness. I remember being happy. I remember...

I want to go home. And I think I remember the way.