With that out of the way, let's get to today's problems.

You're stuck on two lands, and while you had nothing your opponent hit you twice with Genju of the Spires, bringing you down to twelve, but did not attack last turn. Here is the board position, which includes a Nezumi Cutthroat that you played last turn: 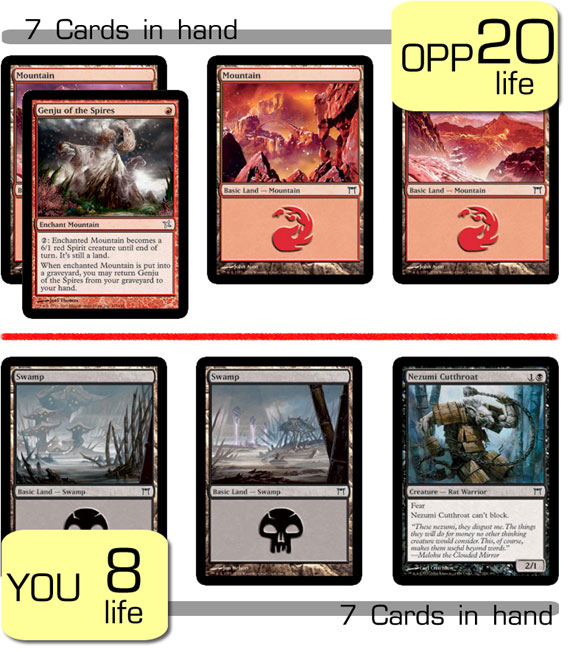 It's your main phase. What do you do? 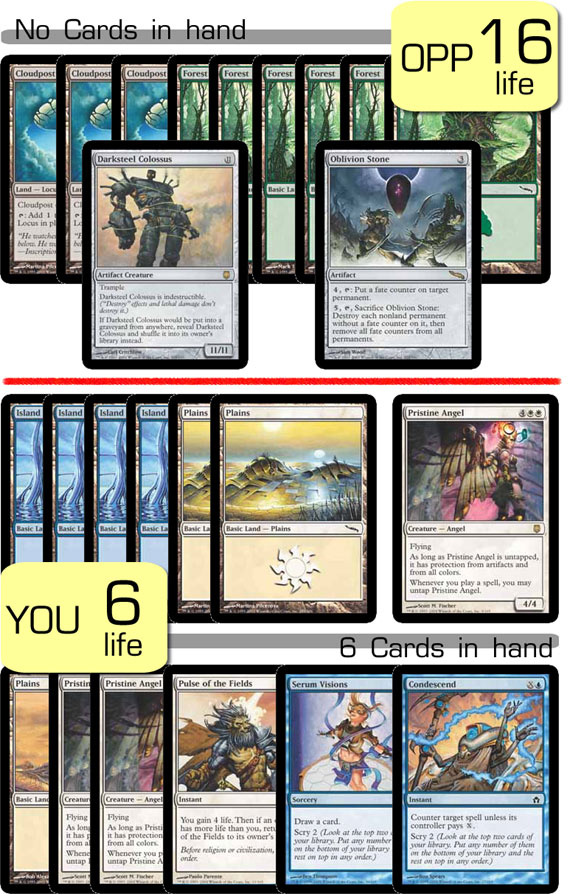 It is the first round of a Pro Tour Qualifier. This game has not been going well, but luckily your opponent has been unable to find a Tooth and Nail. There are no cards in your deck that can remove Darksteel Colossus and he knows you have the Pulse of the Fields in your hand. You had mentally given up the game for lost, but then you realized that your opponent was trying to figure out if you could untap your Pristine Angel as an instant. So, what is your plan to try and win this game, both this turn and after that?

What is your play this turn?

Your opponent also has another way out of this, which is to mana burn himself to prevent you from getting back Pulse of the Fields, but you must hope he does not do this. Chances are that he won't even notice the possibility given his rules mistake. He also has to draw no cards relevant to the game, but so many of his cards focus on mana that there is a good chance this will happen.

As it turned out, the game went exactly as planned and I won the match despite losing two Pristine Angels. The look on my opponent's face when I buried them was priceless.

An important word of warning is in order. You are under no obligation to tell your opponent the rules if the opponent isn't asking any questions. But, if he asks, you need to tell him the truth and when the time comes you have to make sure the rules are enforced. Not doing so is cheating.

You can win more than your share of matches by assuming that your opponents will play correctly, but often you can do better. If he forgets that one of his creatures is in play, factor in the chance he will continue to forget. Also factor in how likely your actions are to cause him to remember.

In advanced situations of this type, you need to figure out how your opponent will react. Take into account everything he knows and everything he believes. You may need to manipulate your opponent by revealing information or making decisions that would be disastrous if he played correctly. In the second example, it is vital that he knows at all times that you can untap the Pristine Angels at instant speed. The fact that this should be irrelevant is not your concern. In your opponent's world it matters, so you need to adjust your tactics accordingly if that's the most likely way to win.

Now, in the previous examples the main issue was an opponent that was probably making rules mistakes. But, the same principle also applies when opponents misunderstand principles of strategy rather than the rules. Weaker players often misvalue the importance of their cards (and yours) in a given match because they don't have the same grasp of the match-up that you do. For example, when you need to cast a test spell to see if your opponent has countermagic, the best spells to lead with are the ones that don't matter but that your opponent will think are worth stopping. Again, you're taking advantage of your superior understanding of the match-up by giving the opponent a chance to make a mistake of judgment. You know that particular test spell isn't too important, but you give the opponent the chance to make the mistake of thinking it is. Once that spell is out of the way, you're now clear to drop the real spell you wanted to resolve. It's a myth that Magic doesn't take much skill to play once you've gotten to a certain point. One of the most important points of this game is identifying where you understand the game better than your opponent and then adjusting your tactics accordingly.