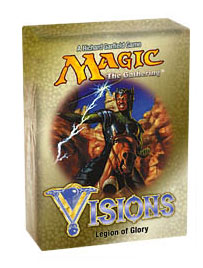 t’s said that fortune favors the bold, and the noble fighters that make up the “Legion of Glory” deck are both bold and fortunate. Control the battlefield, keep your opponent’s forces off balance, and your determined little army will march to victory!

The “Legion of Glory” deck is filled with efficient creatures. In fact, none of them cost more than three mana. Early in the game, get out as many creatures as you can and start attacking before your opponent can set up a defense. As the game progresses and larger creatures start appearing on the other side of the table, your forces may start to seem overmatched. Don’t worry—they have some tricks up their sleeves.

Your creatures have ways to make your opponent’s blockers smaller, make your attackers bigger, and prevent damage to your creatures. Most of those tricks will be sitting out on the table, intimidating your opponent! How can your opponent expect to block your creatures when they have flanking? And when Infantry Veteran or Zhalfirin Commander are waiting to make them bigger? And when Resistance Fighter or Femeref Healer are poised to prevent damage? Or when Jamuraan Lion flat-out tells a potential defender it can’t block? That doesn’t even take into account instants like Remedy or Warrior’s Honor. And in case the unthinkable happens and one of your creatures is lost, it might just have a Miraculous Recovery in its future.

You can also keep the pressure on by enchanting your attackers. Not only do Sun Clasp and Favorable Destiny give a boost to the creatures they enchant, but their other abilities protect those creatures from harm. In a pinch, you can enchant one of your opponent’s creatures with Sun Clasp just to send that creature back to its owner’s hand. Pacifism and Afterlife can tame the fiercest opposing creatures, and Blinding Light can clear the path for a massive, game-ending attack. But the most devastating spell of all may be Retribution of the Meek, which can devastate your opponent while leaving every single creature in your deck unharmed. Fortune favors the bold, indeed. 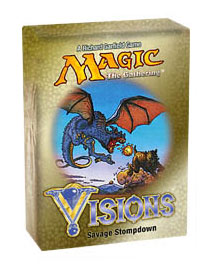 n Jamuraa, the law of the jungle is “Eat or be eaten.” Guess which side the “Savage Stompdown” deck is on? This unruly horde of Rhinos, Cheetahs, Elephants, Apes—as well as other not-so-natural animals—doesn’t take kindly to intruders on their home turf, and is ready to do some turf invading of their own. It’s time to go feral!

More than half of the cards in the deck cost four mana or more, so spend your early turns developing your mana base and playing defense. Getting an early Quirion Elves allows you to start playing your beefy creatures as quickly as turn three. If you can’t find the Elves, don’t be afraid to block with a Raging Gorilla to trade with an early attacker or to use Rock Slide to take out a single creature. Targeting one of your opponent’s creatures with Feral Instinct (while that creature isn’t attacking you, of course) is also a good idea, just so you can draw an extra card. Once you hit four lands, you’ll be plenty busy, so there’s no need to hold those spells back.

As soon as you can, start stampeding. Giant Caterpillar, Ekundu Cyclops, and Hulking Cyclops are all ground-shaking attackers. Don’t play Bull Elephant if its ability will prevent you from playing your other creatures for a few turns, but be sure to have it join the party when ready. From here on out the plan is simple: Attack and run over any blockers.

The “Savage Stompdown” deck has an unusual feature for a red-green creature deck: Creatures with flying! Locust Swarm is an excellent blocker, and it can sneak in some attacks while still being ready to defend. Spitting Drake and Kyscu Drake form a reasonable air force, but if they’re not doing the job, they can fetch the mighty Viashivan Dragon. Natural Order can also fetch out the Dragon (since it’s green), or, if it would help you more at the time, the 8-power Crash of Rhinos. What better way to welcome your opponent to the jungle? 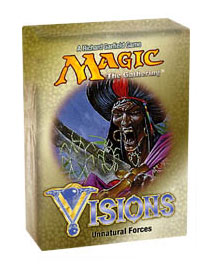 ith the “Unnatural Forces” deck, you won’t just beat your opponent. You’ll flummox, bewilder, and frustrate anyone who dares take you on! Armed with the tools to manipulate your opponent’s creatures, hand, and library, you might as well be rewriting the laws of nature themselves.

The “Unnatural Forces” deck is mainly a reactive deck. You’ll wait for your opponent to do something, then you’ll undo it. Once your opponent runs out of steam, you’ll take control of the battlefield. By that time, you’ll be poised to win with creatures that never really die, such as Brood of Cockroaches or Restless Dead, creatures that smash in for a ton of damage at once, such as Waterspout Djinn or Fetid Horror, or the combination of the two: Necrosavant. Sacrificing Brood of Cockroaches to resurrect Necrosavant is perfect, because the Cockroaches will come back from the dead as well!

How do you control the game in the meantime? Enfeeblement will clear the board of small creatures, while Ether Well, Boomerang, Man-o’-War, and Flooded Shoreline will temporarily remove any threat. If you’re feeling mean (and I think you are), follow Ether Well with Sealed Fate or an attack by Coral Fighters to make that temporary removal permanent. You can do the same trick by playing Coercion after returning a permanent to your opponent’s hand.

But the manipulation doesn’t end there. Simply using Coral Fighters or Sealed Fate to weaken your opponent’s draws will slowly but surely push the game in your favor. Using your temporary removal spells to return Nekrataal to your hand means you can repeatedly play it to destroy creatures. If Nekrataal ever dies itself, Necromancy will bring it right back! And just about the best possible start you can have is to play Coercion on turn three to knock a gigantic creature out of your opponent’s hand and Necromancy on turn four to bring it back from the dead . . . under your control. 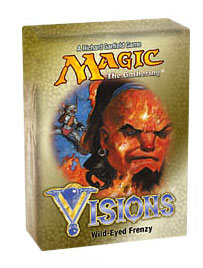 he “Wild-Eyed Frenzy” deck does one thing: Attack. Or, rather, ATAAAAAAACK!!!!! It’s designed to send in a wave of screaming, ravenous Goblins at the beginning of the game, then follow that up with a wave of lumbering Minotaurs and other marauders. Toss in some burn and a few potentially ridiculous power-boosting spells, and you might have a deliciously short game on your hands.

What’s so ridiculous about this deck? Imagine this sequence. Turn one: Play Keeper of Kookus. Turn two: Play Goblin Elite Infantry. Turn three: Play Goblin Soothsayer and Goblin Recruiter, putting all the rest of your Goblins on top of your library. Turn four: Play Song of Blood followed by a second Song of Blood. Thanks to Goblin Recruiter, each one will dump four creatures from your library into your graveyard. When you attack with your four creatures, they’ll each get +8/+0, for a total of 36 damage. On turn four!

Of course, that’s not a very likely scenario. But it doesn’t need to be—you dealt 16 more damage than necessary! The Goblin Recruiter–Song of Blood combo is powerful, and can end games before they’ve really gotten started.

Simply sending a horde of fearless, expendable Goblins at your opponent turn after turn can rack up the damage, putting a great deal of pressure on your opponent to stop you. By the time your 1/1 creatures have been brought under control, your hefty reinforcements will be ready to change the nature of the battle. Talruum Champion, Talruum Piper, Flame Elemental, and Kookus provide a whole different challenge, and your opponent’s defenses probably aren’t up to the task.

And then there’s the burn. Chaos Charm, Unerring Sling, and Flame Elemental can incinerate enough enemy creatures from the board for you to continue your assault. You’ll need to decide whether it’s better to use Flare and Fireblast the same way, providing a clear path for your attackers, or whether saving them to finish off your opponent is the better plan. What to do depends on the state of the game. But as long as they set fire to something, you’ll be in good shape!