ast week, in L.A. in Translation, we set up the gauntlet for the current Extended PTQs. In that article, we said that a good gauntlet would be made up of Psychatog decks (both Dredge-inclusive and Mental Note), Boros Deck Wins, Heartbeat combo, Billy Moreno's new version of Madness, and perhaps some non-Top 8 scoring Affinity or Goblin decks. With three, Three, THREE Grand Prix Top 8s to look at this week, it is interesting to see how preparing for the metagame in such a way would have served us on the grander scale. 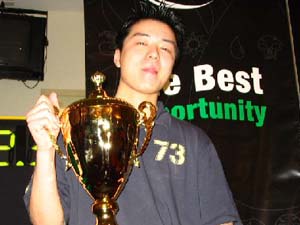 James Zhang sports some new hardware. So far, our metagame preparation would have reasonably predicted the Top 8. I think it's kind of odd to see neither Heartbeat combo in the elimination rounds nor Billy's three color deck, but most everything else seems more or less on the radar. Raphael Levy spent the first seven rounds of Pro Tour L.A. undefeated, and only barely missed Top 8, in contention until the final round of the Swiss. A reasonable facsimile of his deck, represented by Hugh Glanville in the Top 8 of Grand Prix Melbourne, basically swaps a Windswept Heath for a Polluted Delta (irrelevant for the purposes of finding an Overgrown Tomb) and exchanges the positions of Withered Wretch versus Duress between main and side.

4 Cabal Therapy 3 Call of the Herd


Sam Atkinson's deck is more of the same, strategically at least, but mixes in a couple of unusual four drops.


I think that the lists are a bit mis-labeled in the Melbourne coverage. I would consider Atkinson's White-splashing deck much more The Rock than Glanville's Levy B/G. Atkinson's deck at least has bulky four drops, life gain utility, and Pernicious Deed (if in the sideboard)... Glanville's deck is an aggressor that just happens to be Black and Green.

Again, our gauntlet would have prepared us reasonably well. The main omission (which will carry into Japan in the third Grand Prix) was Balancing Tings. I thought that Balancing Tings would more or less fall off the radar given the outcomes in L.A., but Nikolaos Lahanas disagreed... and took his deck to Top 8.

4 Terravore 3 Life from the Loam 3 Seedtime

Balancing Tings is based on playing Balancing Act and blowing up all its own lands in the same turn (check out how they can all make themselves disappear). Typically the Balancing Tings player will cast Balancing Act with one card in hand (floating three mana) or with one remaining permanent in play (ideally a Terravore). The theory is that all the land on both sides of the table will go away, leaving a Terravore and two participants playing off the tops of their decks. Terravore wins pretty quickly, generally in 1-2 strikes against a helpless opponent. Before the advent of Psychatog in Standard, Balancing Tings was held down with such cards as Innocent Blood (good also against the dominant Desolation Angel decks of the day). However, and in light of Dimir week, the Black-Blue best creature ever printed did follow Balancing Tings into Standard; in the same way, Psychatog's recent successes in Extended are the primary reason I thought Balancing Tings would fall off the metagame charts.

The card Psychatog is of course the centerpiece of the classic Psychatog archetype (Mental Notes or no), the finisher in the new Dredge decks with Life From the Loam, and even helps out Wild Mongrel and Aquamoeba in U/G Madness as a splash. Now all Psychatog decks pack counters, meaning that a Balancing Act player might not want to discard all his cards and blow up all his lands… but even when the counters don't cut it, Psychatog can trump Balancing Act and/or Terravore. If the Psychatog is in play when Balancing Tings tries to play Balancing Act without Terravore in play, Psychatog's ability allows it to dump its hand and ruin the initial setup (forcing an in-hand Terravore into the graveyard); on the other hand, if it comes down to a brawl between three drop finishers, Psychatog can give itself +1/+1 and Terravore -2/-2 at will by removing two lands from graveyard. If Psychatog continues to perform well – and this weekend says that it will – I would not recommend Balancing Tings, though perhaps the finishes in Copenhagen and Kitakyuushuu mean that it should re-earn its spot on the playtest gauntlet.

The Boros Deck Wins decks in Copenhagen were reasonably close to Tsuyoshi Fujita's Top 8 deck from Los Angeles, but substitute the Meloku-killing Char for Pulse of the Forge. As for Ravager decks, there were three... just like the number of Arcbound Ravagers (and Scale of Chiss-Goria!) in Olivier Ruel's deck. No, I don't get it either.

The most innovative deck of the Copenhagen Top 8 is also the winning list. Julien Nujiten, our much decorated reigning World Champion, stapled together elements from a couple of different decks to put together "Big Stinks":

1 Deep Analysis 1 Life from the Loam

1 Genesis 1 Life from the Loam


Julien's deck has got a Gifts Ungiven/Life From the Loam engine like Kenji Tsumura in Los Angeles and makes room for all kinds of stuff in his deck by cutting Cunning Wish like Antoine Ruel. And by "stuff" I mean platinum hits like Stinkweed Imp. Stinkweed Imp isn't actually as bad as it looks, because the heavy Dredge cost allows Psychatog to feast on a hefty graveyard. Stinky also defends against opposing Psychatogs with maddening efficacy.

And then we have GP Kitakyuushuu...

Kitakyuushuu is already being called the toughest Grand Prix to win of all time, and that is probably defensible considering the participants in the tournament's Top 8. As such, the tournament's winner, Tomohiro Kaji of PT Atlanta 2005 fame, had to have had a good deck.


This version of NO Stick has a lot of things going for it. The singleton Eternal Dragon gives the deck a counter-resistant source of card advantage (that can grab Sacred Foundry, no less) and also a long game win condition of some merit after an attrition war. The lone Orim's Chant main deck seems odd... I'm sure Kaji's opponents played as if he had more copies, which was probably to the eventual champion's advantage. Isochron Scepter + Lightning Helix just seems cruel to beatdown decks.


This new deck, like so many others from Pro Tour L.A., seeks to break Life From the Loam. This time, the engine pieces include the newly drawback-dropping Solitary Confinement and Zombie Infestation. Going long, this deck uses Seismic Assault in concert with Life From the Loam to... you know... kill you.

To make a long story short, our preparation would have required supplemental finger crossing to succeed in Kitakyuushuu's toughest field ever.

Overall, here is how the Grand Prix top 8s looked in aggregate:

In honor of Dimir Week, it seems that the Extended gods have bent the winners in favor of the Black-Blue Psychatog (no surprises there).

So what should you play? As far as Grand Prix Top 8 data goes, it looks like Heartbeat Combo is a good choice. One reason is that Heartbeat is the most powerful known deck in the Extended format. More importantly, Heartbeat Combo's absence in the aggregate Top 8s means that it will be under prepared-for in at least the short term. Most of all, Heartbeat matches up well against the kinds of decks that are showing up at the top of the standings. Boros Deck Wins has very little it can do about Heartbeat's core plan. Control decks are historically the best weapons against combo, but the version we saw from the Pro Tour was filled with card drawing. Deep Analysis into Fact or Fiction into Gifts Ungiven backed up by Cunning Wish can be too much for certain control decks, especially those with only 3-4 Gifts Ungiven total fueling their reactive elements. Though Heartbeat likes to win with Mind's Desire, Chris McDaniel actually beat NO Stick standout Ryuchi Arita in the L.A. Swiss through an Isochron Scepter + Orim's Chant and TWO (!!!) Counterspells… defeating the Columbus repeat quarterfinalist on Arita's own upkeep!

I hate that dirty combo feeling as much as the next non-Johnny guy, but my suggestion is that if you are interested in a Honolulu Blue Envelope, take another look at the Star Wars Kid: