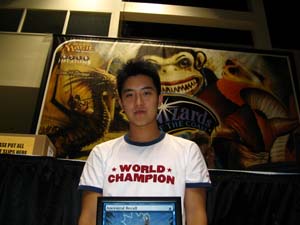 Pro Tour-Philadelphia champion Gadiel Szleifer played in this year's event, as did Alejandro Escribano, who crossed the Atlantic to participate after winning the Vintage event in his home country of Spain. Among the big names in Vintage that attended were last year's champion Mark Biller, Stephen Menendian, Kevin Cron, Rich Shay, Robert Vroman, Brassman, Brian Demars, and Roland Chang, all of whom are notable deckbuilders, writers, or players with multiple Top 8s at big events in the past year.

The Swiss rounds went about as expected, and while Meandeck stars Menendian and Cron missed out on Top 8 berths this year, the team still placed two members into the elimination rounds. In fact, the Top 8 as a whole was particularly strong this year with Midwestern team GWS placing Mat Endress in the Top 8 to supplement a field of notables playing solid and diverse decks.

Andy Probasco mistakenly drew in the last round with Bob Yu before figuring out that his tiebreaker math was bad enough that it was probably going to cost him a Top 8 slot. The two players realized this just after the round started, but the had already signed the match slip and turned it in to the judge, dooming them to their fate. Unluckily for Yu, his tiebreakers weren't as good as Probasco's, putting Andy into the Top 8 and leaving Yu kissing his sister.

After winning the tournament (and the 12"x15" Ancestral Recall painting), Roland Chang said, "Winning the event means a whole lot to me. Since playing Vintage Magic competitively three years ago, it has been my goal to win one of these huge events sooner or later, but I didn't think it would ever be the Vintage World Championships. I've made Top 8 and won a few smaller tournaments, but there's nothing like winning this. As for the artwork, I am going to keep it for a little while. I know there are plenty of collectors out there and I may end up selling it. Like one of my friends said, 'Everyone has their price.'" 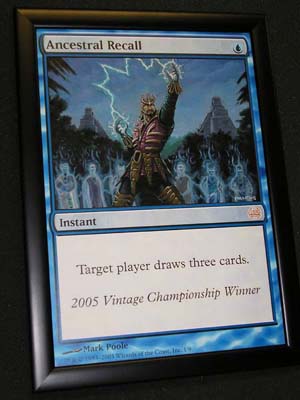