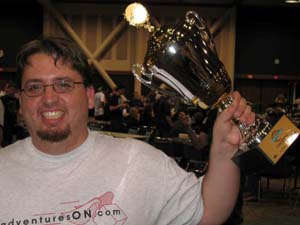 At 2007 Grand Prix–San Francisco, Luis Scott-Vargas achieved something accomplished only once before by Antonino De Rosa: he followed his Nationals win with a Grand Prix victory. Luis piloted his Mystical Teachings deck through eighteen rounds, ending in the finals against his friend Jonathon Stocks. Stocks took it to three games, but it was Scott-Vargas' key sideboard Spell Burst that vaulted the California native to the win and trophy. Congratulations to Luis Scott-Vargas, the 2007 champion of Grand Prix–San Francisco!

2 Pull from Eternity 1 Return to Dust