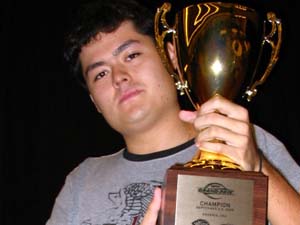 In a Top 8 that included four Pro Tour Champions (Gadiel Szleifer, Shu Komuro, Geoffrey Siron, Romao), one Hall of Fame candidate (Raphael Levy), 2005 Worlds Top 8 member Andre Coimbra plus Sam Stein and sixteen year old Sean Inoue, it was the kid that almost took home the title. Inoue squeaked out a quarterfinals victory over Shu, then pipped Sam Stein's ridiculous blue-red concoction with topdecked Feast of Flesh in games 1 and 3, on his way to the finals to face an assured star in the finals. This was after Inoue was the last undefeated player in a tournament that featured much of Magic's best and brightest from around the world, a great start for someone who just started driving this year.

On the other side of the bracket, Romao was busy taking down Geoffrey Siron in his quarterfinals and then edging Raphael Levy in the semifinals. He then fell behind Inoue in the finals on a mistake, giving the kid hope that he'd take home the trophy from his first ever Grand Prix. Romao wasn't going to let it happen though, demolishing Inoue with a serious deck advantage in games 2 and 3 that included a pair of Stalking Yetis. Inoue's hand in game 3 was particularly slow, and it didn't take long before Jabba was shaking his hand, ecstatic to hoist another trophy in a game he thought he quit not too long ago. Congratulations to Carlos Romao, the 2006 Grand Prix-Phoenix champion!