And So It Begins

seems like it has been forever since the release of the second set in the Kamigawa block entered the Magic scene, but the reality is that this past weekend was the first time it has seen actual play in a premier event. Grand Prix–Eindhoven marked the debut of Betrayers of Kamigawa on the professional Magic scene and it did manage to make its presence known.

During the Swiss, there were various Genju of the Spires sightings as well as the Tendo Ice Bridge, but the biggest impression made by any one Betrayers card was the humble Shuko. This modest piece of equipment appeared in the Top 8 of the event in Kamiel Cornelissen’s take on Lucas Glavin’s GP-Boston Cephalid Breakfast/Life hybrid.

Shuko serves the same function as a Nomad En-kor, but it can’t be taken down with creature kill. It allows the combo player to put out the equipment without having to dodge fire raining from the sky. Once the Daru Spiritualist is in play, nothing short of a Banishing or Edict effect can take him out easily and you can proceed to equip him over and over again until you have achieved the desired degree of infinite toughness. From there you are a hop, skip, and a Starlit Sanctum from theoretical victory. 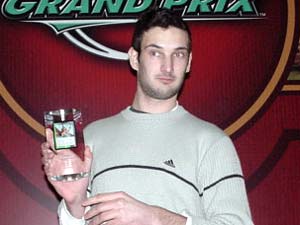 Roux isn't smiling here, but we're sure he did at one point.In the end, Kamiel’s Betrayers-inclusive build fell in the quarterfinals to Tobias Radloff’s by-the-books Reanimator build. Tobias was taken out by Rogier Maaten’s Affinity deck and Maaten advanced to face Sebastien Roux and his Psychatog deck. Tog decks have been doing well in Japan and popped up in other parts of the world as well. Roux guaranteed that this is a deck you will have to contend with for the remainder of the season when he emerged smiling wider than the Tog (well…not in his picture, but I am sure he was smiling widely at some point) when he won the 1011-person event.

This weekend the Grand Prix action switches to Magic’s homeland, Seattle. Players from all over North America (and apparently one or two from Japan) will try their hand at this wide-open Extended format that seemingly puts forth multiple new decks each week. I am going to be heading West to provide coverage for the event and am looking forward to uncovering the latest Betrayers tech for the waning weeks of the Extended PTQ season.

Did I say waning weeks? By all accounts, the Extended season was scheduled to end at the close of March. For most of the world, this is going to be the case but players in the general vicinity of the Philadelphia area will have the opportunity to play in three additional Pro Tour Qualifiers in New Jersey and Pennsylvania, in addition the Last Chance Qualifier the day before the Pro Tour.

The additional events have been dubbed "Countdown Qualifiers" and I assume are designed to give local players increased opportunities to take advantage of the new "skins game" prize structure that is being featured at Pro Tour–Philadelphia. It also means I might actually get to play in a couple of PTQs this season after basically writing off any hope of doing that when I had to skip out on all the February PTQs -- March is all coverage all the time for me.

Laura Kilgore, the Tournament Organization Manager for North America, announced the new test program as something that she hopes will incentivize local players to vie for a berth at their regional events. The program is currently in place for only North American Pro Tours and it will be repeated for Pro Tour–Los Angeles (more info on that as it becomes available). “Depending on the specific event and the surrounding area their could be three to four of these Countdown Qualifiers for local players,” added the long-titled Kilgore.

Here's the vital info for the Countdown Qualifiers:

After back-to-back weekends of stray Betrayers sightings in Constructed, the set will be pushed to the forefront when it will make its Pro Tour debut in Atlanta. Teams are practicing both Team Sealed and Team Rochester all around the world to get a better handle on how the new set will impact the thoroughly explored Champions Limited format. It is not too late for you to get in on the action. While there are no Countdown Qualifiers for that event, there will be the traditional Last Chance Qualifier on Thursday (which will be Team Sealed) and will push two teams through into the Pro Tour.

Masashi Oiso was awarded a much-deserved berth at the Invitational by the readers of this site as he put plenty of daylight between himself and the next closest race horse. The results from the Writer’s Ballot are starting to resemble a two-person race between Jeroen Remie and Tim Aten, although until all the ballots are revealed the race is still anyone’s to win.

This week’s ballot features a fresh crop of the game’s newest faces on the Rising Star ballot. This ballot features up-and-coming players who have posted results that belie their relative inexperience. Go check out the merits of the candidates and get to voting.

Firestarter: So, whatcha playing at Regionals?

For the first time in months, it is not a pointless question to ask what people are considering to play in the Standard format for upcoming Regional tournaments. R&D took no prisoners, lining up all the suspects in Ravager Affinity against the wall and mowed ‘em down. I am looking forward to Aaron’s Friday column, in which he will explain the process that led to this decision. In the meanwhile, what does this mean for the Standard format? Is there any one deck that is going to rush into the gaping hole left by Affinity (and anti-Affinity for that matter)? Or will we see something that looks more like the current Extended, with a host of decks vying for the top honor with new decks constantly churning to the top?

Sorry to keep it so short this week folks. I will explain my brevity in the opening of the coverage from Seattle . . . see you there.