Wizards of the Coast offices are closed for the Thanksgiving holiday, but we'll return with new articles (and, perhaps, pants sizes) on Monday, December 1. In the meantime, here's the article that ran in this slot last week for those who may have missed it. Have a great weekend, and we'll see you on Monday!

ast week I talked a little about how the Player of the Year race might shake out in the light of a weekly lineup of Grand Prix events until Worlds. The results of Grand Prix–Atlanta had to give front-running Shuhei Nakamura a pain in his neck from looking back to see just how close his pursuers were behind him. Tomoharu Saito seems to be heating up for a stretch run and gained some ground with his Top 8 finish as compared to Shuhei's "disappointing" 22nd. 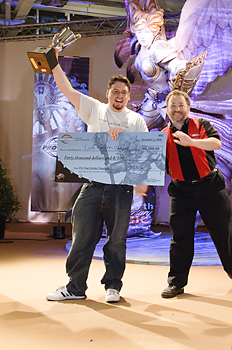 The real story was how Luis Scott-Vargas thrust himself into the race as a serious contender while winning his second major event in two weeks. Coming into Berlin, Luis was just looking to cross the next threshold in the Players Club for 2009—he did not even have 20 points coming into the Pro Tour—and now he is within two touchdowns (14 points for non-football speakers) of the title. The way Luis is playing right now it would be a mistake to count him out—especially if he attends any of the three remaining Grand Prix events.

When baseball players describe how they are seeing pitches as the come to the plate they often say that they are seeing the baseball like it was the size of a volleyball. In basketball someone on a hot field goal shooting spree will liken the net to the opening of a barrel. Luis could not come with an analogous description for his Magic experiences across these past two events, but there was one thing he was certain of just days after the tournament.

"I'm just riding this wave as long as it lasts," said Luis when asked if there was some change in his approach that could account for his recent surge. "I don't feel like I'm playing really differently. At Berlin I had a much better deck than I usually have at Pro Tours, so that helped. Before Atlanta I did a bunch of drafts, and that pretty much determined my plan for the drafting portion."

"The biggest mistake I think I routinely made was playing decks at Pro Tours that weren't good enough," he continued. "Our Hollywood deck was pretty bad, as was our Valencia deck last year. I would like to think that I am playing at a good technical level, but sometimes that is hard to spot. I did go back and MTGO more before Atlanta for sure, as I think I wasn't quite up on the format for Grand Prix Kansas City."

Whenever you play in a Limited Grand Prix you have to ask yourself if the deck you open is good enough to earn you a seat at the drafting table—can it keep you from picking up the fatal third loss? While Luis was happy with his Sealed Deck from Day One of the Grand Prix, it almost fell short of the fundamental task on Day One: getting to Day Two.

"I liked my Sealed quite a bit, and ended up straight red-green with three Branching Bolts and an aggressive curve," Luis recalled of building his deck. "I did only go 7-2 though, so the Sealed part went about as badly as it could have with Day Two still in the running."

Once he got to the draft tables there was a clear plan in mind for Luis and it involved drawing cards, killing things, and playing colorful artifacts. 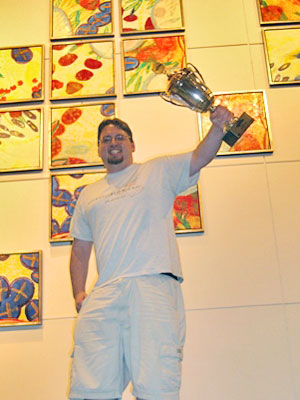 "I drafted Esper in the first draft and the Top 8 draft," said Luis, repeating what he had said in an Ask the Pros segment on Day One. "That was basically what I wanted going in. My plan didn't really change, although the packs were such in the second draft that I ended up black-red instead, which I don't like as much."

When Luis came through that second draft he found himself wedged between Gerry Thompson and Steven Wolansky—two players who know a thing or two about drafting—for the Top 8 draft. How does having experienced players on either side of you affect your draft?

"It's a mixed blessing to sit with good players, but overall much better," said Luis. "The downside is that you won't get insane cards super late, like I did in the first draft—8th pick Fatestitcher, 8th pick Sanctum Gargoyle—but the upside of having players who read signals and draft in a disciplined fashion is way bigger. Both drafts where GerryT and I sat next to each other we went a combined 5-1, only losing to the other person."

Luis would go on to play Gerry in the Finals and took the rubber match of their personal battles on the weekend. Just like that, Luis was $3,500 richer and right in the mix for Player of the Year. Are there any more Grand Prix on the horizon for him?

"I was going to Auckland before Atlanta, and am still going. I don't plan on going to Taipei or Okayama," he said. He added that while the lead isn't likely to change hands, there are many sets of hands reaching for it. "Shuhei has to be the odds-on favorite, but a lucky Top 8 and any one of the next couple guys could steal it."

MTGOMG He Does It Again 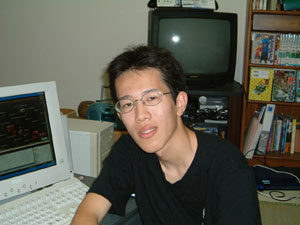 Speaking of repeat winners. One of the very first columns I ever did under the banner of The Week That Was featured an interview with Toshinori Shigehara, the winner of the MTGO Qualifier for Worlds. It has taken him four years, but the twenty-something player from Hiroshima is going back to Worlds courtesy of this year's qualifier. His deck was featured in a recent Arcana. I wanted to find out what this player thought about getting a second chance, the differences between online and offline play, and what kind of decks he faced to win this amazing prize.

BDM: How did you qualify for the Online Qualifier Finals and what did you play to earn that chance?

BDM: Why did you choose to play Mono-Red?

Toshinori: I saw a lot of Faerie players in 8-man Constructed just before the qualifier.

BDM: What decks did you play in the Top 8? Were there any close calls along the way?

Toshinori: Mono-Red, Fae, Merfolk. I had a close game against Kithkin, which made me 8-0 in the Swiss. I didn't expect that deck and had no good answer against it. If I had faced that deck in Top 8, I would have lost my chance.

BDM: What did you learn from the last time you went to Worlds? How will
you prepare for the tournament?

Toshinori: I learned the importance of the "real" game. It is totally different from the online game. I went to a lot of GPs, PTQs, and GPTs in these four years. I will practice in real life as many times as possible until the next Worlds. Of course, if I can I will play online, too.

BDM: What do you expect the Standard field to look like? Extended?

Toshinori: Standard is unclear, but I think Faeries is nice. In Extended, Elves is the best unless there are banned cards.

BDM: What is your best format out of the Worlds formats? Your worst?

Toshinori: Standard is the best, and Limited is the worst.

BDM: What other Pro experiences have you had besides the last time you qualified for Worlds?

Toshinori: I couldn't take part in PTs, but I went to most GPs and Nationals in Japan after the previous Worlds.

BDM: What are the differences between playing online and playing in a pro tournament?

Toshinori: The atmosphere is different. I feel everyone plays all games seriously, and the importance of each play is particular.

If you have not already checked out the 2009 Grand Prix schedule you should do so now. There are a couple in interesting morsels to be taken away from it, not the least of which is the announcement that everyone with an X-2 record at GPs will advance to Day Two as opposed to the traditional fixed cuts to 64 and 128.