That was the exchange last night between my wife and I as the entire coverage team settled in for a four-team practice session of Magic 2013 Team Sealed. We only had 30 minutes to build our decks—half the amount of time allotted to the teams who advance to Day Two of the World Magic Cup this weekend—and I didn't have any time for sweet nothings with my sweetie. She recently presented me with a Chopped-style basket of leeks, preserved oranges, cellophane noodles, and Halvah candy and an identical time limit, so she had to appreciate the time crunch we were under.

As my boothmate Rich Hagon, DailyMTG.com copyeditor Mike McArtor, and I were staring at twelve packs of cards—which included four copies of Pacifism, three of Searing Spear, two of Murder, and a pair of Planeswalkers (along with an X-spell and other bomb rares)—I was regretting even the 90 seconds taken away for the phone call. While it would be easy to build three monocolored decks, the format is not nearly as simple as that and I can't wait to see what the Hall of Famers—who have careers that go back to the days of Team Sealed on Day One of Team Pro Tours—will do in this modern reincarnation of my favorite format.

By the time this article goes live, we will be less than half a day from getting the inaugural World Magic Cup under way. As I am writing this, the tournament set is being uncrated around me as Gen Con springs to life and Rich and I are suiting up to record our preview pieces for the event. The World Magic Cup is going to have all the wall to wall text, video, and Cover-It-Live coverage you have come to expect from the last couple of Pro Tours. Slap on a wrist band, walk past the security guard like you belong there, and join me backstage for a quick tour as we get ready for packoff. 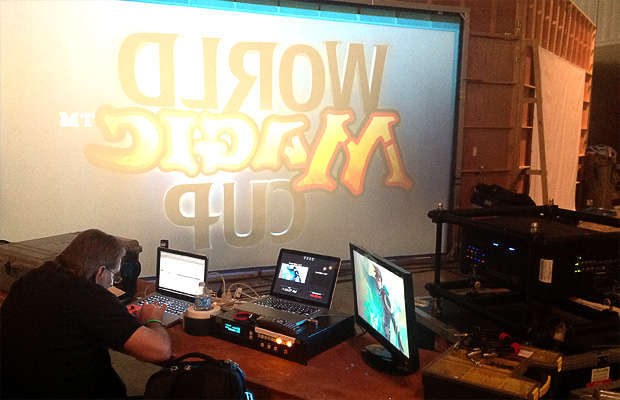 Here you get a look "behind the curtain" of the video wall that illuminates the Featured Match area for the event. There is a restricted area that has been constructed, work stations, and shipping crates to keep back-stage denizens from wandering in front of the rear projector—something we learned very quickly. 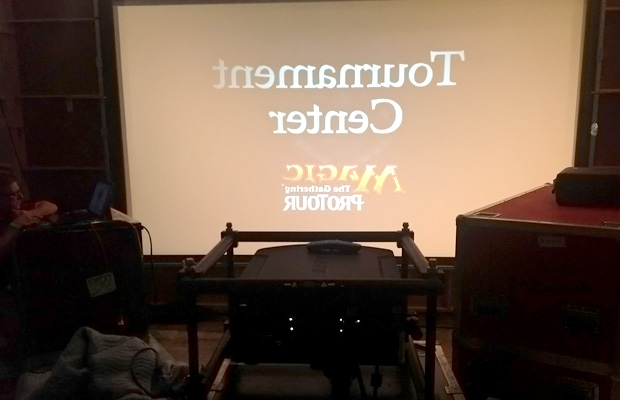 One of the biggest leaps forward in the video coverage during last season was our move at Pro Tour Avacyn Restored to a two-studio set, which allowed us to shoot deck techs and the News Desk segments separately from the Feature Match area, and to provide constant content from Round One all the way through the end of each day's action. 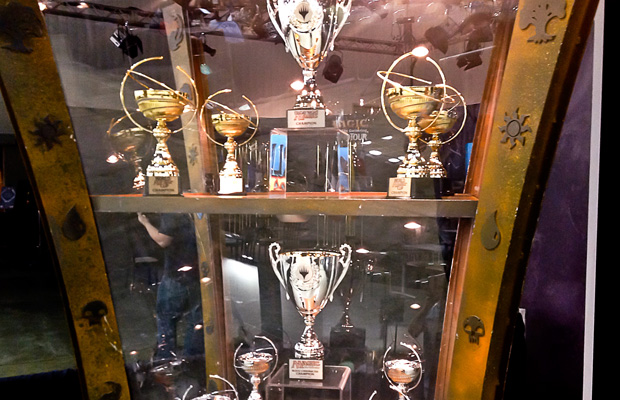 As I made my way around to look at the flip side of the screen I was distracted by the shiny new trophies that will be handed out on Sunday. Honestly, there has been quite a crowd of people distracted by the hardware as players from around the world have been snapping pics with what they hope to be flying home with on Monday. 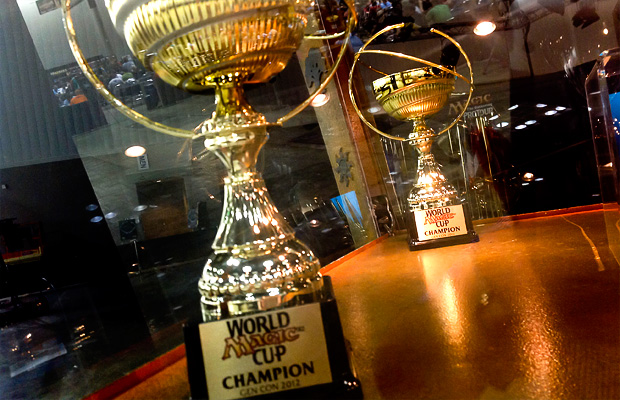 It is only fitting that a brand-new tournament should feature a brand-new silhouette for its trophy—or four trophies for the winning team—and this one is pretty slick. 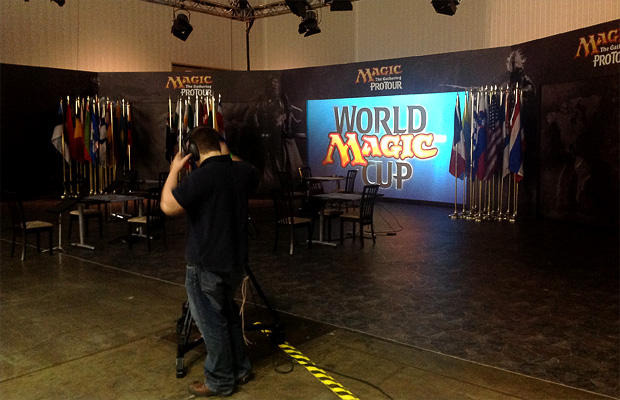 Now you get a look at the business end of the Feature Match area and some of the professional equipment—and attendant camera professionals—that go into bringing you the round-by-round action. With more than seventy countries able to field teams for this event, you see the flags lining the back wall. 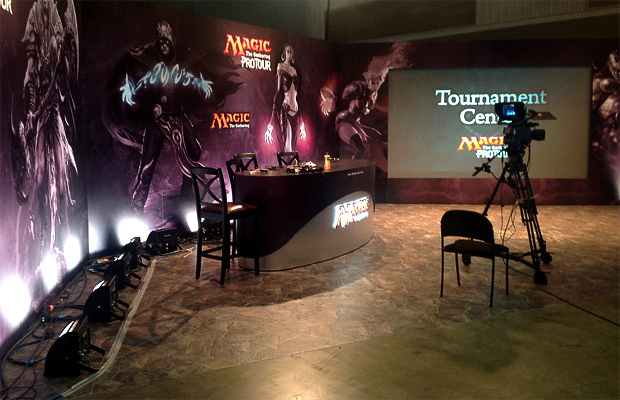 And the shiny new News Desk and the rest of the so-called Studio B... 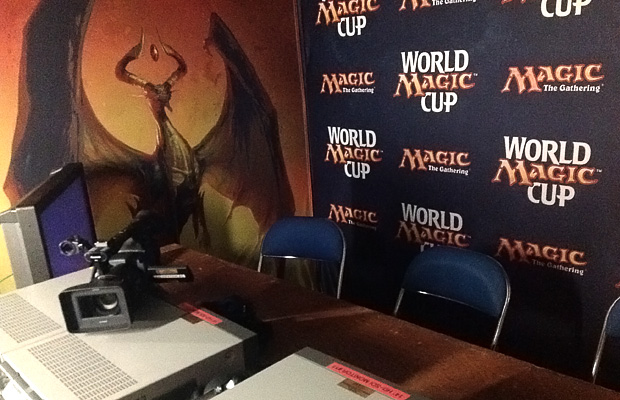 ...and, of course, the fabled booth. While it feels like only yesterday that I first stepped inside of one, I am rapidly approaching my thirtieth high-level webcast. Having a team that also includes Rich Hagon, Sheldon Menery, Rashad Miller, Marshall Sutcliffe, and Zac Hill keeps it fresh and exciting after all this time. 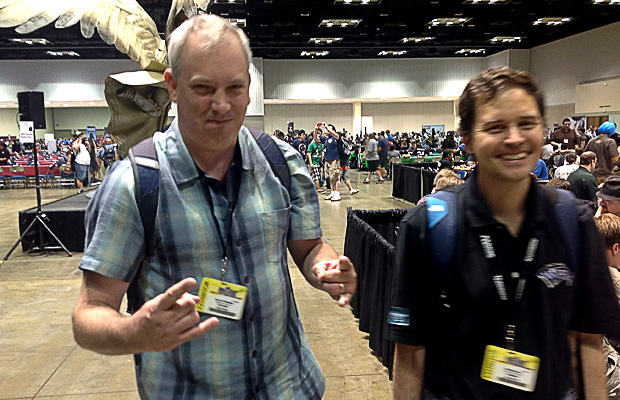 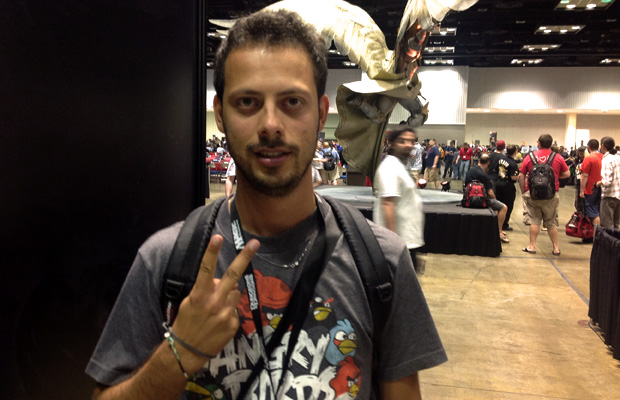 I joked with Pro Tour Philadelphia winner and Italian National Champion,Samuele Estratti that it looked like he was predicting a second-place finish in this picture. With thirteen rounds of competition against the world's best players, Estratti said he would gladly lock in a second-place finish that would carry his teammates to Seattle to compete in Pro Tour Return to Ravnica. 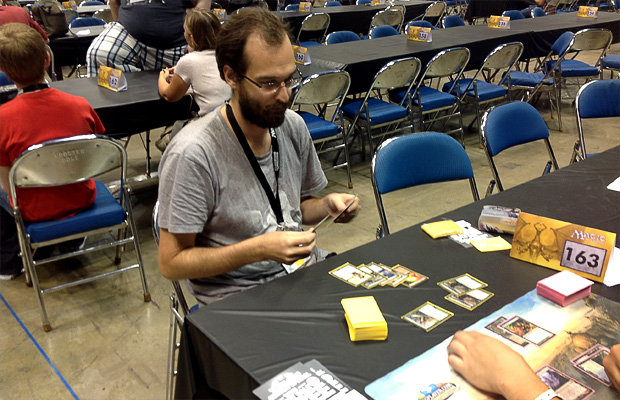 Thailand's National Champion is American ex-pat Mat Marr, who has been living there for the past year. Marr said he and his teammates have put in long hours of preparation and would like a finish much greater than any Thai teams have posted in the past at a World competition—a Top 4 placing would qualify the whole team for Pro Tour Return to Ravnica. Marr explained that winning a PTQ in Thailand is not always as exuberant an experience as it is elsewhere in world. Thai players have not redeemed their share of blue envelopes over the years due to not wanting to travel abroad alone. Having four players qualified, on the other hand, could be the start of something exciting.

That's all I really have time for, though. We are about to shoot our preview pieces, which you can see right below, and go play some more—I mean to say, head to a meeting. Tune in all weekend at www.wizards.com/webcast for the live video stream!