o have you chosen a guild yet? Anyone who has read me talk about playing Magic, or follows me on any social media, should already know that I am soundly Simic (something that was reinforced when I took the test) and I have to wait until Gatecrash for my cards to arrive. That doesn't mean I will not be fighting ferociously on behalf of my guild when it comes time for the Prerelease. It will require collaboration with either Izzet or Azorius, but I am prepared to make that "sacrifice" and play Islands come next Saturday. And if I am lucky, I might just have today's preview card in my Sealed Deck pool to help close out some tight matches.

We make a big deal about all sorts of rares, mythic rares, and even uncommons, like the cycle of Guildmages and Charms destined to have an impact on Constructed formats ranging from Block Constructed all the way to Legacy, but today I am here to talk to you about a seemingly innocuous card that is going to help you overload the competition. Or if you need more pinpoint control at a moment's notice, it can provide that, too. Ladies and gentlemen, allow me to present your new Limited best friend (for those of you playing blue anyway):

This is a type of card with a long and noble history of snatching victory from the jaws of a gape-mouthed opponent who was sure the game was well in hand. If you go all the way back to the earliest forms of Sealed Deck, a card like Lure often filled this role, sending one creature to keep the rest of your opponent's team busy blocking while everyone else ran by uncontested. Obviously, there was always the risk of your creature taking a Dark Banishing to the face in response—or worse yet, mid-combat before blockers have been declared. It was also not much help when you were facing down a lethal attack from your opponent's creatures with no window to play it safely. But in an era when Limited games would bog down to a parking lot of Durkwood Boars, Hill Giants, and Gray Ogres—and I mean the actual cards, not just the combination of color and casting cost—Lure was often the happiest of topdecks.

Things got a little better when Urza's Saga Limited season rolled around and Falter was added to the combat mix. Gone was the era of a potential two-for-one and in was the era of a card that did nothing until it could win you the game. At least as long as your opponent didn't have any flying creatures to block with. As bizarre as it seems, I recall players turning their noses up at the card in the earliest days of the Limited format. In an era when people were first starting to hone in on a ratio of seventeen or eighteen creatures, five or six removal spells, and seventeen or eighteen lands, there was not much room for a card that didn't jump into the red zone or kill something that did. At least at first; it didn't take long for players to figure out that getting all your creatures through for an alpha strike was well worth a spot in their Limited roster.

Cards of this ilk that have come in its wake have rarely made it this easy to push all your creatures through. They require a little bit of work on the part of the user. One of my favorites comes from the unfairly maligned Champions of Kamigawa block Limited season, when I was happy to bury my opponents under an Unearthly Blizzard. You could only keep up to three creatures from participating in combat, but it combined with splice onto arcane—and honestly, how many creatures do you really need to exempt from combat to push through for the win?

Mirrodin Limited might be remembered by most for first-picking artifact lands—and truth be told that is also what I remember most about it—but Blinding Beam was a sweet second. The card was fine doing either of its two abilities but really shone when entwined to lock down all your opponent's creatures to allow you to swing for lethal over two turns. After an attack, a player would often play a second main-phase creature—and usually a fatty at the midpoint of the game—and you could not only lock it down but keep the creatures who attacked locked in the sideways position for a crucial turn.

It was reminiscent of Choking Tethers from Onslaught just one block previous. Tethers featured the cycling mechanic and you could either cast the spell to tap up to four creatures or just cycle it and tap one creature in a virtually uncounterable way. It was not uncommon to draft a deck full of fliers and race until you tripped up your opponent with your Tether to steal the race. Although it was not uncommon to merely cycle the card on turn two to find a missing land drop.

Dirge of Dread was another card in that format that did something similar. I remember playing a Game 3 against Hall of Famer Bob Maher for a shot at drawing into Day Two of Grand Prix Philadelphia and agonizing between playing the spell and giving all my creatures fear or cycling it to just give fear to the one creature that would kill him. I worried about a counterspell and ultimately decided to go for the cycling mode and ended up losing to his removal spell. But I digress.

Then, of course, there has been Sleep, which was one of the cards used by none other than Hall of Famer Shuhei Nakamura this past weekend while winning a star-studded Grand Prix Top 8 in Costa Rica. It has been a core set staple and has even seen some sideboard play in Constructed decks. It is four mana and can only be played at sorcery speed, so it has some things working against it despite locking your opponent down for two whole turns.

Blustersquall is a pretty sweet entry into this class of cards and one able to steal games of Magic for you during the Prerelease and even at Grand Prix Trials for—and during the main event of—Grand Prix San Jose. This is one of those cards with an alternate casting cost that is going to be paid much more often than its actually casting cost, but it can still be a lethal weapon at a mere

when deployed at the right time. Think about all the times you have been in a Limited race with both you and your opponent sending creatures across the red zone and mounting your troops each turn. Imagine for a moment that you are the noble blue player, attacking by twos in the air with your creatures while your opponent has been lumbering across the red zone with an ever-increasing density of Oxen, Boars, and Wurms. You are going to win on the next strike but your opponent plays a Spider of some kind that will throw your combat math one turn off of winning. A single blue mana during your end step will allow you to tap the Spider; untap; and use your mana on your turn for whatever spell, creature, or ability you were going to use for your final push to deal that 20th point of damage. 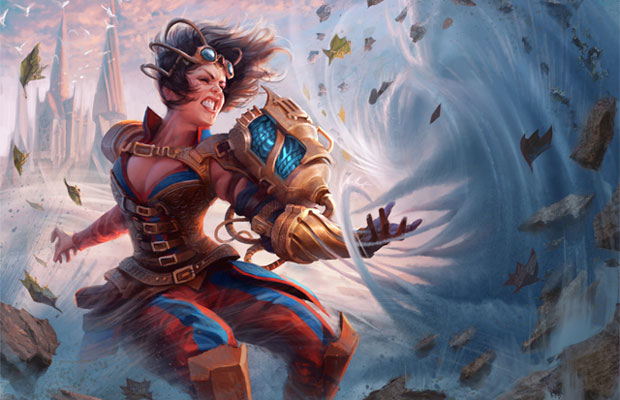 What I really like about Blustersquall is that you can use it proactively against your opponent's sorcery-speed game-ending combat tricks. Overrun? Pay four mana and tap your whole team. A more appropriate scenario would be when your opponent taps out to play Collective Blessing at the Prerelease. Different Overrun... same solution. Assuming you have some way to deal with the enchantment or swing in for the lethal attack on your next turn.

I fully expect smug Selesnya players to be hiding behind an army or overpopulating Wolves and other foul creatures during the Prerelease weekend and—hmmmmm, that actually sounds pretty good. Why am I so stuck on Islands for the Prerelease weekend? Simic is also green. Selesnya is green. I like populate. I guess I could play Selesnya. I need to go think about this. Meanwhile, don't forget to pay attention to Blustersquall when building your decks—or don't. I will get back to you.