Bobbing Below the Surface

here seems to be something magical about the first Pro Tour of the season. I missed last year's kickoff event, where Jon Finkel showed up and demolished the field, to a bout of pneumonia. This year I spent most of February fortifying myself with vitamins and various saline treatments to make sure I would not miss Kyoto. Needless to say, I was not disappointed. Matt Place and Randy Buehler both joked that Kyoto was the second best Pro Tour of all time—although they did not agree on the top slot. Both placed only their own wins from the late 90s—Matt's in Mainz and Randy's in Chicago—ahead of the called shot by Nassif.

Of course after being confined in a metal tube for umpteen hours on the flight home I promptly collapsed into a puddle of NyQuil and DVRed episodes of Lost, 24, and Top Chef. It was well worth it to have one of the best seats in the house for one of the most dramatic topdecks in the history of the game followed by the first individual title for one of the game's elite players: Gabriel Nassif. 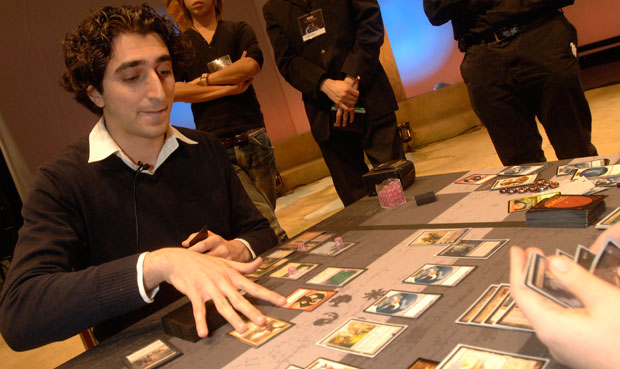 Nassif tied Kai Budde for the second most Top 8 appearances all-time. The tie came seven and half years after Nassif's Sunday debut as a teenaged—and yellow hated—member of Les Plus Class at Pro Tour–New York 2001. Nassif's team made it all the way to the Finals of that event before being shut out of the title by none other than Kai Budde and Phoenix Foundation. Gab and Kai were fresh off of a Grand Prix tussle that saw them reach the finals of GP–London, with Kai winning two games to one.

With Gab's topdeck they find themselves locked in another battle. Which was a greater topdeck: Kai Budde's Morphling in the Finals of Pro Tour–New Orleans or Nassif's called shot against Matteo Orsini Jones in the Quarterfinals in Kyoto? You could also be a partisan of the Lightning Helix that Craig Jones used to dispatch Olivier Ruel in Honolulu but I really believe it comes down to the topdecks of the two titans of the game; Nassif's to stay alive in the quarters and Kai's to win on the final possible turn in the final game of a tremendous Top 8. Think about it while reading the rest of the article and I will prod you for your answer in the Firestarter.

I got an interesting message on Facebook the other day from a player who wanted to know something about Luis Scott-Vargas and he prefaced the question with, "Now that LSV's hot streak is over ...." 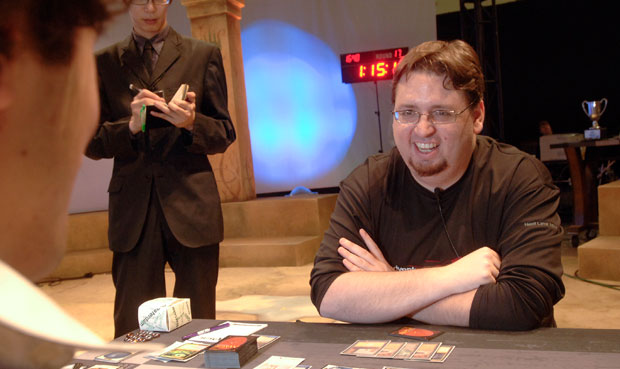 Let us be perfectly clear about this. Winning PT–Berlin, winning a GP, finishing 11th at Worlds, winning another GP, and then finishing 2nd at a Pro Tour to Gab Nassif, with an 18-match PT win streak across two events thrown in for good measure, is the very definition of a hot streak.

I cannot imagine that there is any other player on the Pro Tour that a PT competitor would less like to square off against than LSV right now. When you watch the video highlights you can see the crispness and decisiveness of every play. Look at his picks in the Draft Viewer and you see someone who had a plan to be Esper from pick one when he took Stoic Angel and never veered off course. Just to make the Top 16 of this Pro Tour required a focus of deck choice and skill level across two formats; to make the Finals and be one game away from winning your second Pro Tour event in three tries is flat-out ridiculous.

The Top 8 of the event will be well examined in the coming days and weeks. For me looking at the results just below the Top 8 is a great way to see who we should be keeping our eyes on in future events much the way Guillaume Wafo-Tapa signaled his ascent in Honolulu and Martin Juza made his mark in Kuala Lumpur.

Depending on how the tiebreakers tumbled we could have seen a Faerie-free Sunday with Adam Koska captaining a third Boat Brew into the Sunday webcast, but the young Czech Republic player had to settle for the agonizing virtual Top 8 finish while Masayasu Tanahashi and the Fae went on to face LSV in the quarters. The Czech Republic has become a Magic powerhouse of late and it is reasonable to expect a strong rookie campaign from Koska, who will have a great support network for him to make another run at Sunday over the remainder of the season.

Another rookie who was hoping for fortunate tiebreakers in the final round was Spain's Oscar Perez, who went 6-2 with Mono-Red, representing a seventh deck archetype in the virtual Top 8. Perez got past Worlds Team Champion and Pro Tour–Hollywood Top 8 competitor Nico Bohny and his Five-Color Control deck in the 14th round of Kyoto but fell decimal points short of a Sunday finish. Nico's deck was using Courier's Capsule as card drawing over more unwieldy choices like Tidings and Fathom Trawl. You can find Nico's list along with all the Standard decks that went 5-3 or better.

The final player with a record good enough to play on Sunday was the aforementioned Martin Juza, who continues to be obscured by the dominating play of Luis Scott-Vargas. During the 2008 season Juza's worst PT finish was 50th at Worlds and included Top 16 in Kuala Lumpur, Top 24 in Hollywood, and a breakout Top 8 in Berlin. His performances continue to be remarkable, and if not for the Kai-like run by LSV we would be talking much more about the Jelger-like season of Juza. Interestingly, Juza's weapon of choice for Kyoto was the same as Scott-Vargas's, although their lists differed.

Former Player of the Year Shouta Yasooka had a Top 16 finish in Berlin playing Black-Blue Tron and once again came within one win of a Top 8–worthy record in Kyoto—playing Faeries this time. Quietly, he remains one of the most formidable players on the Pro Tour.

France's Yann Massicard's decklist is lost to his 4-4 record in Standard—only the decks with a 5-3 record or better were entered. Yann did manage a perfect record at the Draft tables to leave himself one Standard win shy of breaking into the Top 8 for the first time in his career. Yann was one of seven players with perfect Draft records to not make the Top 8 and the only one to finish as high as the Top 16. There were nine players overall with perfect draft records including LSV and Matteo Orsini Jones.

There was a tremendous overlap in the Top 16 from Germany to Japan. Germany's Denis Sinner is another Top 8 competitor from Berlin who ended up within shouting distance of the Top 8 in Kyoto playing a third flavor of Reveillark in the tournament—blue-white as contrasted to the Boat Brew and Esper 'Lark versions. Sinner flew beneath the radar all weekend long but with two his most recent PT results will bear closer attention in Hawaii.

I have interviewed Gavin Verhey on multiple occasions and each time he has mentioned PTQ veteran Ari Lax as a founding member of Team Unknown Stars. Ari kept himself near the top tables all weekend for an auspicious Pro Tour debut with Faeries—a deck archetype that put a handful of players within games of the Top 8.

Finally, in terms of the Top 16 anyway, Team CMU is alive and well with Nick Lynn's performance in Kyoto. Nick and Mike Turian bantered back and forth via my Twitter feed at the Pro Tour about the good ol' days at Carnegie Melon. The Pro Tour veteran had a very cool play with his Boat Brew deck. He was holding multiple Banefires in hand while his opponent hid safely behind Runed Halo naming Banefire. Nick took his opponent to 1 attacking with Reveillark but was nervous about letting his opponent untap in such a close game. Instead he decided to Banefire his own Reveillark to get back Mogg Fanatic for the win.

Of course the final standings for the event are determined by a combination of Standard and Limited records. If you remove 40-card play from the equation the standings look somewhat different. Don't be fooled by the absence of multiple Top 8 competitors from this list, though, as they could draw while the players with the best Standard records were generally scratching and clawing right up until the final rounds.

There are a handful of decks that went 7-1 or better (better being 7-0-1; no one went 8-0 in Standard) that came from unexpected tribes such as the undefeated Elves deck, the 7-1 Treefolk, and the Mountainless Kithkin. Here's how the top decks shake out if you leave out the Draft portion:

Once again, you can find these deck lists on the top Standard decks page.

Friday Night Foil: Everything plus the Kitchen Finks

In the post-Kyoto haze, my editor goofed and sent the wrong FNM card...so consider that Merrow Reejerery an early April spoiler. For March, you'll have to make do with Kitchen Finks, which just happened to show up more than 30 times in the Standard decks from Kyoto that went at least 5-3. Give one a home in your deck by going to Friday Night Magic in March. 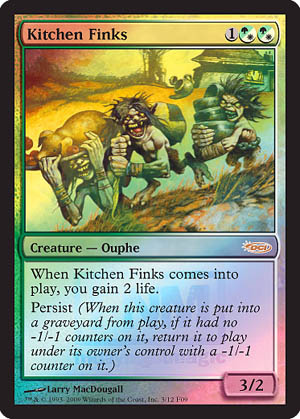 To my mind there are only three options; Craig Jones in Hawaii, Kai Budde to win New Orleans, and Nassif's called shot this past weekend. Head to the forums and share your opinion on which of them is the best card ever to be found on top of a competitor's deck.