A Boy and His Lark

n the eve of Pro Tour–Kyoto a group of us coverage types were sitting around the hotel lobby making our pre-Pro Tour picks. A lot of well-known names were bandied about, and I would be hard-pressed to argue against the likes of Shuhei Nakamura, Guillaume Wafo-Tapa, Luis Scott-Vargas, or even current rising star Martin Juza, but the player I picked for a breakout weekend was Florida native David "Dirv" Irvine. 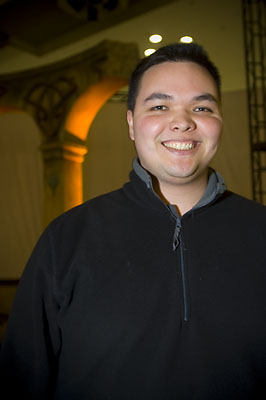 David has been on a terrific hot streak that began just a week before Worlds and continued through to this past weekend in Richmond, Virginia at the two most recent Star City 5K Standard Opens. David made the Top 8 of the Philly 5K playing an off-the-radar Reveillark list that used Tidehollow Sculler and Sower of Temptation where other players were slotting Seige-Gang Commanders and Ranger of Eos. He followed up that tournament with a 9th-place finish at Worlds, winning the Draft Challenge on Sunday at Worlds, and winning the Richmond 5K this past weekend playing an updated version of the same deck.

I caught up with David at Pro Tour registration to get a little more info on the player who seems to be hitting his stride just as the 2009 Pro Tour season is getting underway. While he has not yet busted through onto the Sunday stage, he has had a taste of the Top 8 tables.

"Grand Prix–San Francisco was a tournament where I had a pretty good run," said David when asked about when he started to feel like his Pro Tour efforts were gaining momentum. "Josh Ravitz gave me a list for a Kavu Predator / Fiery Justice deck. I managed to start the tournament off with a 12-0-1 run—which is a pretty good place to be. I lost in the first round [of the Top 8] to Luis Scott-Vargas, who ended up winning."

"I have been playing since before Mirrodin and the first Pro Tour that I attended was [the first] Pro Tour–Kobe, which was Mirrodin block," continued David who has ties to groups of players hailing from both Floirda and New Jersey. "My testing team there was Antonino DeRosa, Ben Stark, Gerard [Fabiano], and Jon Sonne. At that point Ant and Ben were doing really, really well, and I latched onto them for a little help since I hadn't been to that many tournaments and it was my first Pro Tour."

It was two-time Pro Tour Top 8 competitor Ben Stark who showed Irvine the way to the Pro Tour.

"I first started playing the Star Wars card game from Decipher," Irvine recalled of his earliest card playing days. "It was quite fun to do and I had a lot of friends playing it down in Miami but I was looking for a way to get more out of it—better prizes, better trips. I decided to start playing Magic as well. There was a local store that was having a lot of tournaments. At that point Ben Stark was going to a lot of local tournaments—he just loved to game. I immediately recognized players who were much better than I was and understood games. It was Ben Stark and Steve Horowitz—they were always about making correct decisions and if there was a mistake replaying the whole game."

"I think it is really important if you want to move up to higher levels of play," answered Irvine when asked about the need to expose yourself to a higher caliber of play as a part of his recipe for success. "Just having one player out of a group of ten that is much better at the game will increase the level of everyone."

Dave bounced on and off the Pro Tour for the next few seasons: "I had been lucky enough to keep winning PTQs and doing well enough at GPs to go to about 8 Pro Tours. My best finish was Honolulu where I got 39th which was not anything amazing."

"On my way back from Grand Prix Atlanta I was in a crowded car and heard about a three-color Reveillark deck that had a lot of promise," David laid out the deck that has served him well during this recent stretch of events and recalled the origins of his Esper Lark build. "Reveillark had kind of fallen out of favor at that point but the concept of being able to get back Tidehollow Sculler and Sower of Temptation just seemed really, really attractive. I put together a list and played it at the Philly 5K as kind of a primer before Worlds. I went there and played the deck in its first version, going 7-0-2 into the Top 8 before losing to a mono-red deck."

Next up for David was the 2008 World Championships where after a bumpy start with his trusty Esper-colored weapon he found himself jockeying for position with Jamie Parke for the final spot on the Sunday stage.

"I went 3-2-1 at Worlds—not really what I was hoping for," explained David. "All my losses and the draw were to the Black-White Tokens deck. At that point I had put three Stillmoon Cavaliers in the main, and it should not have been as bad as that. The last round of Day One I actually beat Jamie Parke, but it didn't end up working out that well on Day Three. I went 5-1 in Extended and 5-1 in Limited and missed out on the Top 8 by .07%. At the start of day I was edging out Jamie by a full 7%—I was kind of surprised when it happened."

Despite being far and away the best finish of his career the ninth place was a tough pill to swallow, even when washed down with a cool glass of Draft Challenge winnings.

"I didn't think I would even come that close," admitted David about his 9th-place squeaker. "I was hoping for a Top 50 so I would qualify for the next Pro Tour. Finishing 9th left me the Sunday off and—although it was not how I planned to spend the day—I ended up winning the Draft Challenge. At that point I was thinking, 'Man, I just won this tournament. I should be happier.'"

With the 2009 season about to get underway, David once again found himself heading to a 5K just before a big event. This time he emerged the winner.

The big changes to the deck came from the addition of Path to Exile. Path also changed how he rebuilt the deck—with a smattering of basic lands—since he did not want to find his own creatures getting Pathed with no payoff.

"Path to Exile making is less likely that you will get Mistbind Cliqued makes the deck even better against Faeries now. It is really big," said Irvine as one illustration of how Path has improved his deck in the post Conflux Standard environment. "They cannot just go for it on turn four on the play when I have only three lands. Before the only answer was Cryptic Command but now I can Path."

People have talked about situations where you can Path your own creatures if necessary, and David has found repeated uses for Path on his side of the red zone—albeit not quite the way you might think.

"In the Red-White match-up, they do not just want to evoke a Reveillark to get some stuff back—they want it to stay in play," he explained. "The best answer comes with Sower of Temptation so that if it leaves play you get the effect. They need to try and kill your Sower of Temptation or they are going to get blown out of the game. You can just Path their Reveillark that you control in response to their removal so you just blow them out. You get the land, you get the abilities."

It is plays like that which illustrate how much time and care David has put into the deck and why it will not come as much surprise to me if this is what he shuffles up on Friday morning.

"It has taken a little while for the deck to evolve. It has mostly been me working on it and I think my list has really come together. This deck has so many choices that you have to practice. You can't just decide to play this deck. In Richmond there was quite a bit of Kithkin and Boat Brew. Sower, Stillmoon Cavalier and Wrath of God were all great for me but I have to rely on my sideboard more if there are a lot of red decks. One of the cards I am surprised is not seeing more play is Runed Halo, especially when it is one of the only answers to a Banefire for 5 and is also a good answer to man-lands and a great answer to Figure of Destiny. It has worked out really well in the red matchups. You can play it early naming Figure of Destiny, counter something later on with Cryptic Command and bounce your Halo and replay it naming Banefire."

While David was not so bold as to make any predictions about himself making the Top 8 this weekend—that's okay, I am more than willing to make the prediction on his behalf—he was pretty certain about a certain Elemental making it, whether it is in Esper Lark or the much more widely played white-red "Boat Brew" deck lists that can recur Seige-Gang Commanders.

"I definitely think there will be at least two decks with the card Reveillark in them," said David. "Nobody is playing Faerie Macabre or Relic of Progenitus and you now have a Reviellark deck that can beat Faeries. Faeries was a lot closer, before but the advantage of deck like Boat Brew is too much for them. I don't think that Faeries is a good deck to play right now."

You have only one pick to make for someone in this weekend's tournament to Top 8. Who is it and why? You know my pick—now head to the forums and tell me yours.