Champing at the Bit

the past Magic year, there has been more Constructed deck information available to players than at any other point in the game's history thanks to the Top 8 Decklist pages. While the page has been a PTQ player staple for each of the Constructed seasons, it kicked off this time last year to capture as much data as possible about the face of the new Standard after Champs.

It is almost that time of year again, with Champs just two weekends away. Next week magicthegathering.com is going to be dark, but when it returns the following week it will do so bursting at the seams with Standard tech from all corners of the globe.

Last year's events were dominated by Affinity, which had been at the top of the pops for quite a while. This year's top decks are not as clear, although Gifts and White Weenie seem like the early frontrunners. It's safe to say that players tend to modify the Block Constructed decks from the previous season.

There is a not-so-small wrinkle added this year as Ninth Edition is also thrown into the mix. The combination of Elves of Deep Shadow and Hypnotic Specter is an example of two cards not available to the pupils of Yamabushi during the Block season. Form of the Dragon is definitely getting a lot of play on the message boards. It seems like many designers feel that the loss of Pentad Prism and Chrome Mox is an insignificant loss for Good Form decks with Enduring Ideal and have turned to green and its abundant mana acceleration to fill the void. Although black-bordered Seething Songs rotated out, they rotated right back in with Ninth Edition white borders so that deck may very well be viable.

2004 New York State Champion Mike Clair expects that the decks Mike Flores dubbed the “Descendants of Kamigawa" will dominate the field and that players should adjust accordingly.

“Though some scattered States will highlight innovation, States remains a Block format but infused with some really good cards," Clair said. “There should be some anti-Gifts cards in every sideboard, like Hokori and/or Counterspells of some sort if you're in that color."

Mike also mused that Umezawa's Jitte should possibly be relegated to sideboard status, as “Suppression Field seems to be the flavor of the week."

“Gifts is definitely public enemy number one this year," Reitemeyer said. "Mostly because you know a lot of top players (the ones you should be focusing on beating) will be playing it as it is a very strong deck and a lot of players are comfortable with it after block, and already have the cards for it (no need to shell out lots of cash when you know how to play an excellent deck and already have the cards)."

A scheduling conflict will probably keep Reitemeyer from defending his title this year, but he has still been looking at the new field.

“I unfortunately have an eight-hour class the day of States, however, I've still been playtesting a bit just for fun vs. White-green Weenie, White-red Weenie, Gifts (three different builds), Black Hand, Reanimator... Since I probably won't be playing I don't mind mentioning that I'd most likely be playing white-red control as it has a good matchup against all the previously mentioned decks. There are so many sleepers that are so good in the deck. I'm even running the classic Serra Angel in my build."

As last year's State Champions, both Mikes won free entry into all Gray Matter Conventions events for a year. (Many organizers in North America offer similar prizes for their State Championships) Clair's string of free PTQs culminated in an 11th-place finish at Pro Tour-Atlanta alongside teammates Steve Sadin and Paul Jordan. He also won a PTQ for Philadelphia but failed to cash in his envelope as he slowly sunk into the world of a certain MMORPG.

Back in the Game

Having escaped the clutches of online gaming, Mike Clair returned to Magic with the release of Ravnica. As many players know, the release of a new set is the best jumping-on point for making a return to the game. The weeks after a prerelease are often like a Magical version of “This is Your Life" with people you sometimes haven't seen for years making guest-drafting appearances. 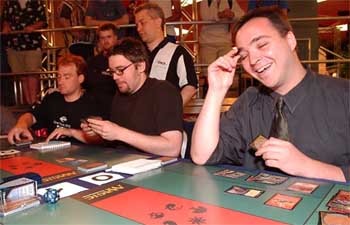 Monkey Dog, back in their heyday.The other night I had a chance to draft with a group of people I hadn't seen in the same room since the heyday of Neutral Ground in the mid- to late-90s. There were my Monkey Dog teammates Eric Kesselman and Brook North, as well as my Grand Prix-New Jersey teammate Tim McKenna. Original Deadguys David Price, Tony Tsai, and Chris Pikula were also in attendance, although Dave only played a little Sealed Deck and passed on the draftivities. Rounding out the group was a handful of characters straight out of the pages of Jonny Magic and the Card Shark Kids: Ben Murray and Alex Balandin, as well as the eponymous main character of David Kushner's narrative. I can't remember the last time I saw Jon Finkel draft, although this was apparently his third time drafting with Ravnica.

What was really striking to me about drafting with this bunch was their improvisational skills. I have probably done more drafts in the format than everyone else at the table combined (with the exception of McKenna). Taking my normal tact, I would sit down for a draft and look to go into one of the semi-established archetypes. I would happily go blue-black on a Vedalken Entrancer or red-white on a third-pick Flame-Kin Zealot.

Not Eric Kesselman though, no sir. Eric and I squared off in one draft and I felt pretty confident in my controllish blue-black mill deck – especially as Eric led off with an array of Elvish Skysweepers and Thoughtpicker Witches. My draw was a little slow but I felt that I had enough time to run him out of cards. The Thoughtpicker became more than just a nuisance when Eric played out Savra, Queen of the Golgari on the following turn. Shambling Shell was the hard lock a turn later as I could not keep a creature on the board. A flying, reanimated, 7/7 Mindleech Mass made a mockery of my mill plan in the next game.

Finkel's drafts were equally interesting as he put a very high priority on the bounce lands and signets, which allowed him to play four colors with little to no difficulty. Counting the signets, his decks were generally half mana sources and he seemed to have no trouble playing Hex, Flame-Kin Zealot, blue card drawing, and even getting white mana for his pair of Flash Conscriptions.

Prior to the last draft of the evening, Eric and I went out to restock the snacks and drinks for the group and discussed the archetypes of the block. Eric is completely unimpressed with the Boros guild and has flat-out refused to draft it, feeling that the deck is underpowered. Of course this meant that Eric would be sent right into red-white – albeit a more controllish version than most – in the following draft when he opened Brightflame. With a third-pick Cleansing Beam, Eric thought he might have finally found the red-white deck that could break through mid- to late-game stalls.

We were doing three-on-three team drafts where each player plays against each player on the other team. The first team to five individual match wins gets the overall win. Our teams split the first eight matches and the final draft of the evening came down to Kesselman versus Finkel. I was kind of surprised to find that Jon had been drafting green-white to my right – especially since he passed me Loxodon Hierarch and a Selesnya Guildmage in the second set of packs. What did he pick over them? Well, you have to go back to one of Jon's most famous decks to understand the love affair Jon has had with token generation and control elements.

While Jon could not manage to secure the counter-magic or a Soldevi Digger for this draft deck (although Eric did wreck my green dredge-based deck with Junktroller in another draft), he still did his best to recreate his favorite archetype with a first-pick board sweeper and multiple copies of the new Outpost.

Ladies and gentleman, Jon Finkel is a highly trained professional gamer. Do not – I repeat, DO NOT – try this at home. By all means, take the elephant and pass the outpost. Here is the deck Jon used to smash Eric in a pair of humiliating games to determine the outcome of the final draft on the night, while singing "The Final Countdown" the whole time. Jon was laughing and enjoying every moment of it while a horror-stricken Kesselman could scracely believe what was happening to him.

If Eric goes another year without playing Magic, this deck will be the reason. While there are a couple of real stinkers in there – notably the Dromad Purebred – the deck had the ability to force an opponent into over-committing to the board to overwhelm the tap ability of the Sandsower and setting up the lopsided Wrath.

Last week in the forums, Sol Malka posted that he disagreed with the Pro community regarding the choice to play or draw in draft formats. Almost to a man, the Pros I interviewed last week advised players to play first in draft format and draw first in Sealed. Sol wrote that he would rather have the extra card from drawing first in just about every draft format ever and that the Pros were simply playing first without any thought as to whether it was actually correct.

While I disagree with Sol's claim that the Pros have not put any thought into their play/draw decision, I am curious as to what most people choose outside of the Pro community. Share your preference in the forums and let the discussion begin.