Coming Up on the Outside

is almost impossible to imagine that just three seasons ago Olivier Ruel was scrubbing out of a PTQ with a 1-2 record and contemplating his retirement from the game. At that point the French player had racked up nine Grand Prix Top 8 finishes, including a win in Cannes, as well as one Pro Tour runner-up finish in Osaka.

Olivier had been taking advantage of the Grand Prix scene long before the Road Warrior category came online but during the 2003 season he was not only missing the Top 8 – he was constantly falling short of the money and enough Pro Points to remain qualified for the Pro Tour. Heading into Pro Tour-Amsterdam, Olivier fully expected that tournament to be his last. He would go onto make the Top 8 of that tournament – his only Limited Top 8 out of five such career finishes. 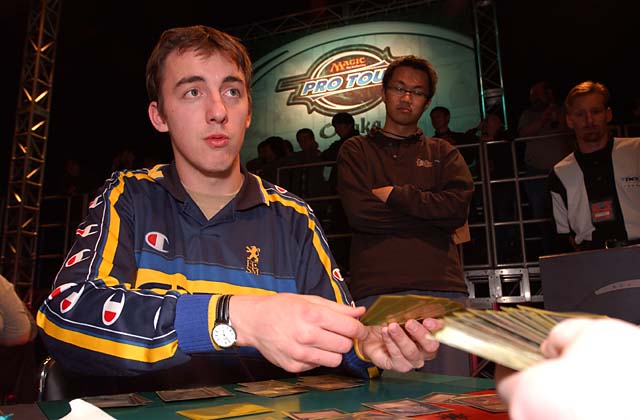 Olivier from his first PT Top 8 in Osaka.He has never looked back.

In fact, over the following seasons Olivier Ruel has joined some elite company with his steady accumulation of Pro Points and cash winnings. If you look at any of the all-time metrics for player accomplishments you will find Olivier's name. He has five Pro Tour Top 8s – something I equate with 3,000 hits in baseball – and his next Sunday appearance will leave him tied for fourth all-time with Gabriel Nassif. Only Kai, Jon, and Darwin – one-named entities all – have more.

Oliver surged past Nassif on the all-time money winners list this season and is now in third place behind only Jon and Kai. His name is also third on the list of lifetime Pro Point winners after those same two players. His finish in Toulouse gave him enough points to nudge past Darwin Kastle by three scant points. It is going to take another 50 Pro Points and roughly $80,000 in winnings to move up another notch on those lifetime totals, but that is just fine with the Road Warrior.

“Third in lifetime winnings…third in lifetime Pro Points…feels kinda weird,” Olivier said when we discussed his recent surge. “At the moment, there are two players who will forever be part of the history of Magic. It doesn't matter how many years people will be playing Magic because nearly everyone will know Kai and Jon. Now I'm just behind them and I don't really know what I'm doing there.

Olivier has always excelled at the Grand Prix game. He made the Top 8 of a European Grand Prix twice in the 1999-00 season, including a team win with his brother and Florent Jeudon at Cannes. Before he went into his pre-Amsterdam slump Olivier racked up nine GP Top 8s. Since Amsterdam he has doubled that number, including his three Top 8s this season.

“I didn't really think about it until last season,” explained Oli after I asked him when he became aware of his meteoric climb on the lifetime lists. “My 2005 season got me close to the top much faster than I would have predicted. I feel like I went from 25th to third in one and a half years.”

Olivier has reaped over $60,000 in winnings and accumulated roughly 120 Pro Points in that span, which should give you an idea how much work he has in front of him if he hopes to pass Jon – next up on both lists. That is not the record he has his eye on, though. The three Grand Prix from this past season have leapfrogged him over the likes of Morita, Ishida, and Fujita into second place on the GP Top 8 list.

“Now it's Alex with 21, me with 18, and Ishida with 17. I hope I'll catch Alex Shvartsman soon,” grinned Ruel. “That has been my goal since last season – to catch him in 2007 for lifetime Grand Prix Top 8s. I need three more – even if I have to play twice as many Grand Prix as he did.”

Most players have modest goals of Pro Tour success. Some want to make Day Two and finish in the money. Once they have demonstrated that they can win money, they start tallying up their Pro Points and figuring what they need to gravy train for next season. It is unfathomable to all but the most elite Magic players to have such long-range goals as passing Jon Finkel on the winners' list or racking up the most Grand Prix Top 8 finishes in the game's history. 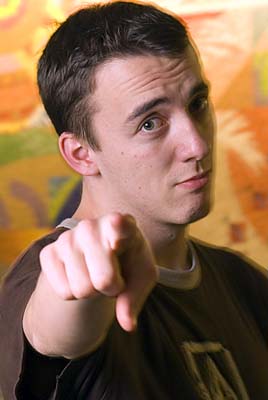 Ruel said his Top 8 in Honolulu was his greatest joy as a Magic player.Olivier likes to see where he stands and sets the goals but claims to put them out of his mind when he plays in competition.

“I try and do my best on every event. Then if I'm consistent the goals appear by themselves,” he explained.

Surprisingly, his success in 2005 filled him with dread regarding the current season.

“At the end of last year I was terrified about 2006 season. In 2005 I had done my best, spent my year on trains and planes and had had all the luck someone could hope for. I just thought there was no way I would do well again.”

Whatever qualms he had were quickly put to rest on the beaches of Hawaii.

“Honolulu was, hmm what is the correct word in English? In France it is 'deliverance' – like getting free, released. Making the Top 8 in the first PT of the season, playing maybe the best Magic I've ever played in a weekend, and making the Top 8 with Antoine – which is my greatest joy as a Magic player – that brought confidence back to me. Apparently I didn't use all my luck last season!”

After that Olivier made the Top 32 of one Grand Prix and the Top 16 of another before rattling off three Top 8s in the past couple of months. Even out a lackluster Charleston finish with a Top 20 finish in Prague and Olivier once again finds himself smack dab in the middle of a tight Player of the Year race. Only Shota Yasooka is ahead of him in the standings, although there are easily a baker's dozen of players who could surge ahead with a strong finish.

When asked who his main rivals for this year's Player of the Year crown are, Olivier took time to look back on 2005.

“Last year was very special for me,” Olivier said. “Not only did I have to stay close to the top of the race for all the season but those I was competing with are great men and players. I was nearly as glad when Kenji won in Toulouse than if I had won myself. I hope he makes Top 8 in Kobe for we can compete again.

“I will say my main rivals are Kenji Tsumura and Antoine Ruel,” he finally answered.

The friendship between Kenji and Olivier that was forged in the heat of last year's Player of the Year race lent every event in the closing days of the season a special drama. In the weeks before Worlds, Oliver, Kenji, and Masashi Oiso were all in China for Grand Prix-Beijing that was critical to the race. It's the one time that Olivier felt that he let the escalating temperature get to him. 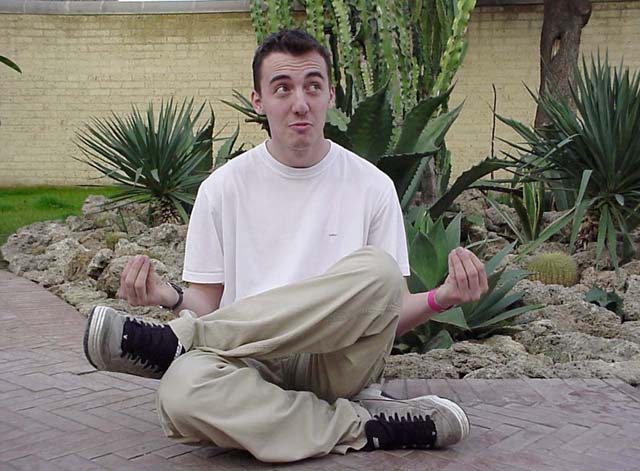 At one time called the clown prince of Magic, Olivier's game is no joke.“Grand Prix-Beijing was so tense,” he recalled. “I am already in Top 8 with two rounds to go and I played Kenji, who needed a win. I didn't concede and beat him. I felt so bad about it. I should have conceded that match. I was thinking too much about the race. Then he won his last round, and we played again in the quarters and the winner had to play Oiso.

“It is much more fun to actually play against the people you're racing with. Eventually I played them both in a Pro Tour Top 8. I just regret none of us has won a Pro Tour.”

The Road Warrior was gearing up for the home stretch of this year's race. As of this writing he did not know if his stretch run would start at Grand Prix-Malmo or French Nationals. The two events take place on the same weekend and Oli was going to let this weekend's Prerelease be the determining factor in which event he attends.

“If I feel like the format is skill intensive I will go to Malmo because Day Two is triple Coldsnap draft, while French Nationals is Ravnica Block Draft,” he explained.

"In August I am invited by Wizards to promote Dreamblade at Gen Con in Indianapolis. Then I sleep one night in France and leave for Grand Prix-Hiroshima. Then Grand Prix-Phoenix, in September I believe. Pro Tour-Kobe in October, GP Sydney and Athens in November and then Worlds in Paris…”

Olivier has pulled into third place all-time for money won and Pro Points accumulated. It seems like he could potentially pass Jon Finkel given two more seasons at his current pace, but what about Kai? Will Olivier ever catch the German Juggernaut? Will anyone? The forums await your thoughts -- or if you want to ask Olivier himself, check out his "Ask the Pro" feature, located on the Tournament Center main page.