Confessions of a Gunslinger

was the guest gunslinger this past weekend at the Los Angeles Prerelease hosted by Glenn Goddard and Sun Mesa Events. Also known as the Champions Challenge, gunslinging is essentially the player equivalent of an artist signing. People sign up to play against you, and if you lose they win a booster pack. I was quite honored to be invited and took the task of protecting the precious packs—and whatever tattered reputation I have as a player with some modicum of Limited skills—very seriously. I was fortunate to receive a deep pool of cards to play with in the first flight of the event and at the Champions Challenge station.

I still have no idea if I built my deck correctly despite leaving more packs in the box of than out of it at the end of Saturday (and most of the packs that left the box did so with my second pool of cards—more on that deck later). Here is the deck I played, as well as all the cards that were left in my sideboard, built from a pool of three Shards of Alara boosters and three Conflux boosters.

I quickly identified that I had opened a handful of synergistic rares in Wall of Reverence, Meglonoth, and Spearbreaker Behemoth. Potentially Where Ancients Tread could have been lumped in there as well but I did not have enough "cheap" 5-power creatures to make that worthwhile. One of the cards that should have been included when doing the Naya math was Nacatl Hunt-Pride. I left it out of the deck because I felt like I already had enough on the high end of my curve, but my deck could have easily accommodated it and probably needed one more fatty—especially one with a rock-solid set of abilities. 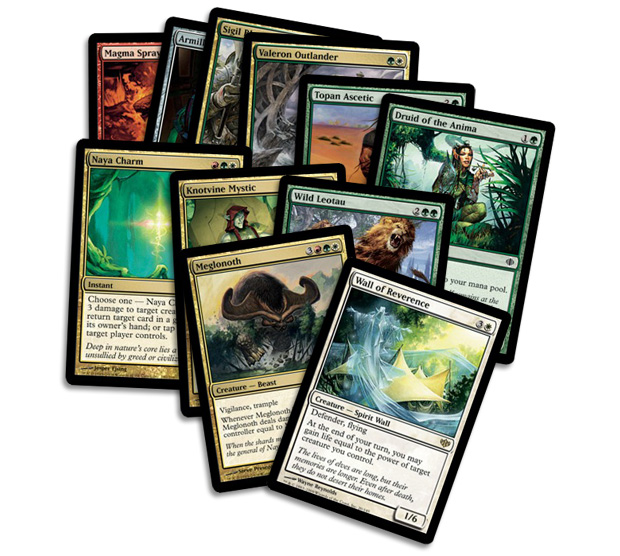 With the Knotvine Mystic in the mix there was little doubt that I would play a base-Naya deck. There was a lot of discussion among the players at my table about whether or not Knotvine Mystic was any good in this format. The camp that held a negative opinion about the card felt that it was fine if you could play it on turn three, but it required three different specifically colored mana to play. Getting to three different mana on turn three is not very hard in the post-Conflux Limited format. I think that cards such as Knotvine Mystic—and predecessors from Shards like Rhox War Monk, Sprouting Thrinax, and Woolly Thoctar—will all go up in draft value due to the multicolor lands and basic land cycling.

Speaking of those lands ... I went back and forth on the inclusion of Rupture Spire in my deck, but in the end was very happy that I decided to put it in. The cost of "summoning" the Spire on turn two or three is not very different than spending your third turn to play an Obelisk in order to fix your mana for a Woolly Thoctar, or having to wait a turn to crack your Panorama for the right assortment of Tower Gargoyle mana. I heard stories about players with multiple Spires in their card pool drawing unkeepable two-land hands but overall I was very happy with the card, which was far more helpful than harmful in my experience with it on Saturday.

Ancient Ziggurat actually presented many more challenges to me than the Spire. At various points on Saturday I found my Ziggurat was so ancient that it would not tap to pay for the activation on my Naya Panorama or cycle either my Fiery Fall or Gleam of Resistance. As a Magic player you become conditioned to leave the lands that give you the most mana options open after playing your spells for the turn. It took a quick period of adjustment to not leave my Ziggurat untapped each turn even if I did not need to use it to play a creature. It is a small price to pay when you consider that in most Limited formats your creature to spell ratio is something like 17:6 in a format where creatures cost

—sometimes in the same deck.

In post-Prerelease correspondence with a handful of players, Paragon of the Amesha and Dragonsoul Knight have been getting rave reviews—as well as Fleshformer, but I did not have one of those in my pool. The inability of the Ziggurat to pay for their activated abilities was the deciding factor in making me not play those two cards but I always felt like I had ready access to as much mana as I needed and often basic landcycled for a redundant land that could have easily been a Swamp.

If I had the deck to do all over again I would likely have made the following changes:

Even now I am not sure if I would play the Hunt-Pride or the red-black enchantment. Suicidal Charge has turned out to be a splash-worthy card with a powerful game-changing ability that works on a number of levels. It sweeps away pesky 1-toughness utility guys, can be used on either offense or defense to whittle down the size of an opponent's army, and, most importantly, can be used to make opposing creatures crash into Meglonoth for fun and profit, and leave your opponent open to a lethal counterstrike. Hunt-Pride also allows you to control the traffic flow of the red zone while not interacting poorly with Ancient Ziggurat—at least in terms of being able to play it in the first place—and has synergies with Wall of Reverence and Spearbreaker Behemoth.

I cannot fully express how game-altering the Wall was on the day—even when it was the only creature on the board. It is made even better by the fact that it triggers at the end of your turn and not during your upkeep. You almost always reap some benefit from it even if your opponent untaps and kills it. I did notice that a couple of players had a chance to do something to a creature—be it bounce it or removal—in response to Wall of Reverence targeting that creature. A well-timed Unsummon or black-permanent-accompanied Dark Temper can keep the Wall from netting any life life that turn. 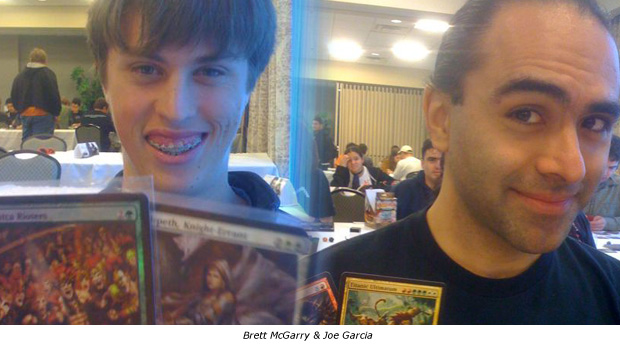 I ended going 3-1 in the first flight losing to a jubilant Brett McGarry and his terrific Bant deck in the fourth round. My deck turned out to have some very exciting trumps against many of the bombs in my tournament, although I had no real answer for Brett's Elspeth. My first two opponents both had Banefire—and I lost at least one game to the brand new

spell—but Wall of Reverence kept me comfortably out of firing range in the bulk of those games. There was a Martial Coup hovering near the top tables, and I had my Spearbreaker Behemoth earmarked as the trump against that card. Meglonoth proved to be a game-breaking trump against Titanic Ultimatum Joe Garcia in Round 2, with Joe hovering at 5 life and Meglonoth prowling the red zone. Because "blample" triggers when Meglonoth blocks, it deals damage to your opponent before anything else. Joe would have not had a chance for any of the good things that Titanic Ultimatum does for you to matter.

Tournament Packs have gone the way of the old card frame and tapped blockers not dealing damage, and coming into the tournament I was curious about the impact of that on Sealed Deck. In the past, the Conflux Prerelease would have featured card pools built from one Tournament Pack of Shards and three Conflux boosters. This would mean that the pool of commons, uncommons, and rares from the Tournament Pack—barring unusual errors and the occasional redundant foil—would only yield one copy of any card from Shards. At the Legions Prerelease, you might have ended up with three Timberwatch Elves, but you would have been lucky to have even one Sparksmith. Under the new system it would have been possible for players to get up to three Sparksmiths. 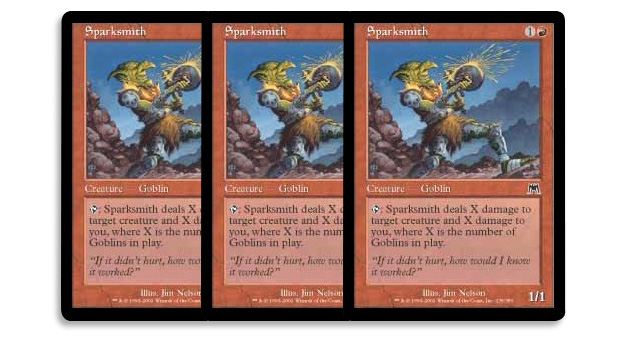 Over the course of the day I ended up with multiple pairs of Shards commons and uncommons. In the first pool I had pairs of Cathartic Adept, Marble Chalice, and the one-of-these-things-is-not-like-the-others Rhox Charger. In the second pool I opened two Sanctum Gargoyles and two Rhox War Monks. I am not making a judgment in either direction, but it is pretty clear that Sealed Deck is very different now than it was before the switch away from Tournament Packs.

The second pool of cards that I had to work with featured some bombtastic cards lurking at the back of each of the Conflux packs to go with the solid base of cards from Shards of Alara. I know I did not build this deck correctly but when you get a look at this pool you will understand the dilemma I faced. I will post the deck I played next week and let you masticate these cards for the week. Here is everything broken down by colors in their mana cost:

What would you have done to whittle this monster pool down to a 40-card deck? Head to forums and share your builds and I will reveal my version next week. I did not do as well with this deck as I did with the previous one so I get the sense that I did not come up with the optimal list.

Myr Enforcer has been a staple of Affinity lists since Mirrodin first spawned the archetype several years back. The deck continues to be dominant in today's Extended format, and this month you can begin the process of tricking out your Affinity deck in fine foil fashion with this new take on the colorless fatty by going to Friday Night Magic. 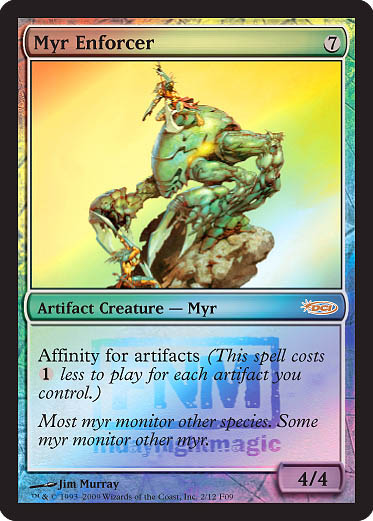