hen you look at a new card for the first time, what do you think about?

Are you one of the players who wants to think the best of every card? Do you imagine that every Due Respect is the next Abeyance when you see it for the first time? Are you one of those players who immediately starts sketching up a Knowledge Pool deck that cheats Emrakul into play upon reading the words "without paying its mana cost"? 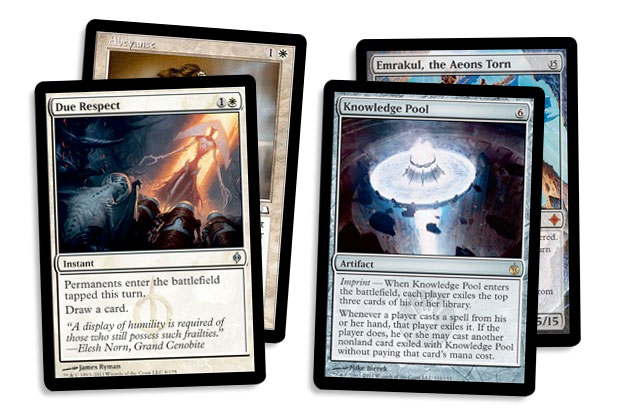 Or are you more cautious with your affections for a new card? Are you one of those players still reserving judgment on Puresteel Paladin and Consecrated Sphinx; waiting to see if they if they spawn any irate ban hashtags on twitter and warp metagames with their gravity?

For me, the first thing I always ask myself when looking at a new card is "Would I first-pick this in a draft?" More than any other format, I interact with Magic three booster packs at a time and those play patterns frame my impressions of a card. "Can I 3-0 a draft with this?" "Is this a card make its color one I am willing to fight over?" "Will my opponents slump in their chairs when I play this card?"

The answer to all three of those questions—in regard to my Magic 2012 preview card today—is a resounding "YES!" Take a look at this first-pick goodness: 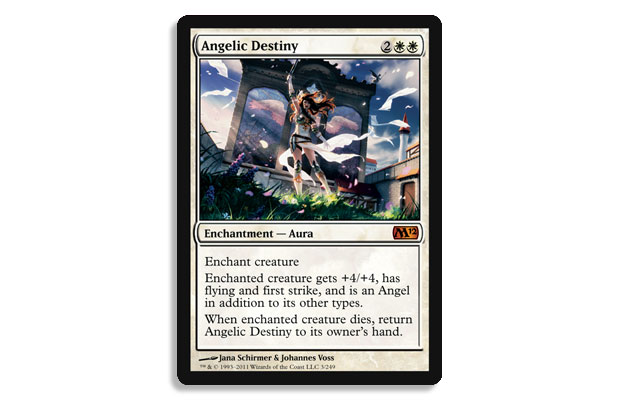 That is a proverbial-windmill-slam, first-pick card and with all the hexproof creatures floating around in the Magic 2012 Card Image Gallery it hardly seems like it would be hard to 3-0 your draft table upon opening this card—unless you are one of those players who avoid green-white in Draft formats. I often looked to parlay an Armored Ascension into Sacred Wolf in Magic 2011 drafts. While any Aura on a Sacred Wolf is going to be good, Angelic Destiny is simply good on its own. If your opponent cannot kill the creature you are suiting up—while you are in the act of buttoning up—the game is unlikely to last many more turns after that.

A 4/4 flying, first striking Angel would be an exciting Limited card—and quite first-pickable—that could easily dominate a game on its own. When you get to fuse those characteristics on top of the stats of a creature you already control, you have the makings of monstrosity. Now compound that with the fact that if you do manage to kill the enchanted creature you are going to have to deal with the enchantment again on a subsequent creature.

That seems like a good place to look at the second thing I think about when I look at a card of this caliber: "How the heck am I going to beat this card in Limited?"

It is a really tricky card to deal with, and one that you will be loathe to tap out against when you know an opponent has it. If the enchanted creature dies—a new piece of terminology that was surprisingly easy for me to get used to despite my being a card-carrying member of the Senior Super Series—the Aura returns to its controller's hand. At first I thought this worked like Rancor, which was impossible to deal with once it was in play. This one is a little less resilient, but still very tricky. 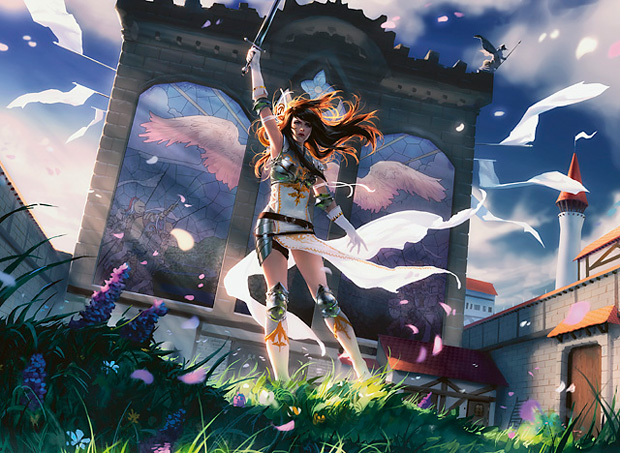 The best way to deal with it is going to be by countering it—be it by classic means like Mana Leak or by more fancypants methods like killing the targeted creature or making it an illegal target. Stave Off, I am looking at you! It is unlikely that an experienced player is going to just walk their first-pick Aura into untapped mana that threatens to kill the targeted creature, but what harm could come from one innocent-looking untapped white mana? 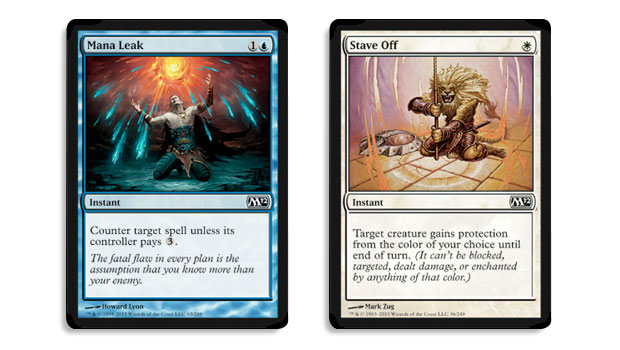 Stave Off, which Mike Flores and I eventually stumbled around, and then onto, on a recent podcast, works differently from many similar cards in that it can "protect" your opponent's creatures from help as well as shielding your own from harm. That makes it a reasonable counter to Splinter Twin in Constructed, and I expect it to be tucked into my back pocket for this Limited format (not literally!) to deal with any opposing Angelic Destiny—not to mention protecting my own from removal.

As a veteran of the great Empyrial Armor wars of the mid-90s I know that bounce is a fine answer to pesky white enchantments. Unsummon has been around for a long time and has seen many an enchanted creature turned aside. At instant speed you can either bounce the creature in response, or even at some other opportune time. As far as the sorcery-speed options, Æther Adept seems like a fine volunteer for this task. Even if the Angelic Destiny has resolved, you will send it to the graveyard if you bounce the creature it is sticking to. You will likely need to take one crushing blow from the enchanted creature, but bouncing it means that you will not need to deal with that pesky Aura again this game... right? 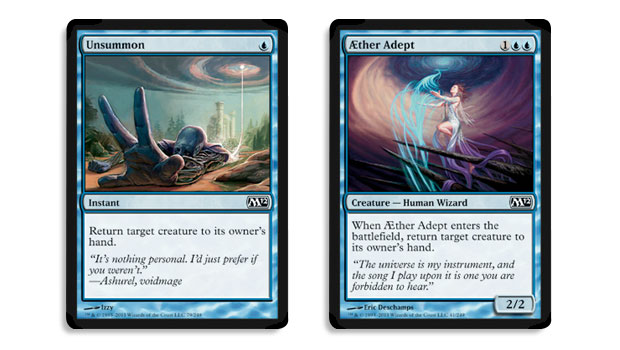 Well... Just looking through the Card Image Gallery some more, you find the intriguing Devouring Swarm. With the Swarm in play your opponent has more flexibility than you—and your Æther Adept—are likely to be comfortable with. Since they can sacrifice the enchanted creature—even if the enchanted creature is the Swarm itself—to the Swarm, they can make the decision whether they want the creature back in hand or the Aura. The ability to sacrifice at instant speed means you can protect the Aura from enchantment removal. When your opponent goes to Acidic Slime the Angelic Destiny, if you sacrifice the creature in response you will end up with the Aura back in hand before the Acidic Slime's ability resolves. 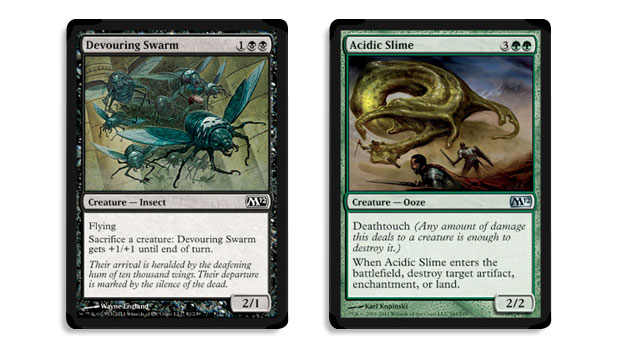 And even if your opponent manages to destroy your enchantment you can always Auramancer it back and undo all their hard work. I expect to see plenty of 6/6, flying, first striking Auramancers in the M12 Limited format. If you open up Angelic Destiny, it will drive the Auramancer up a little bit in your pick order to give you some redundancy. Needless to say this is the kind of high-quality card that you will be willing to warp your deck around... regardless of what side of the table you are sitting on. 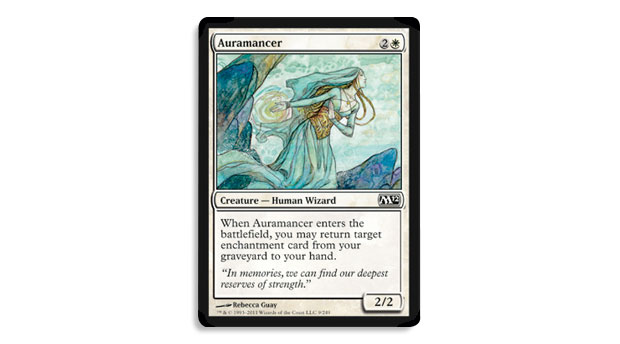 Exile is a bad place for Angels to go, and this card is no exception to that rule. Oblivion Ring, recently revealed to be returning in the Core Set, is a fine way to deal with a creature suited up with wings. While you would always prefer to hit the enchanted creature, Oblivion Ring can even deal with enchanted creatures that have hexproof since you can always just exile the enchantment itself. 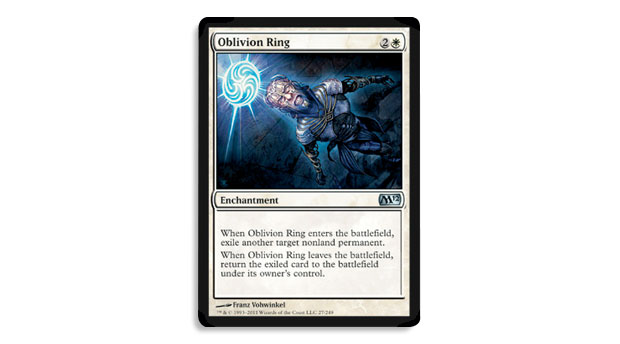 The third thing I think about when looking at a new card is how it will hold up in Constructed. Can this card hold its own in 60-card formats? I think the answer in this case will be yes. We have seen Equipment-enhanced creatures rule the red zone for the past year. There are obvious advantages to having Equipment, but this has many of the same advantages and dodges the artifact hate that many decks have sitting around in their sideboards these days.

I will leave the details of what decks can support it and which creatures will wear it to the Floreses of the world—and to you. Share your thoughts on this card in 60-card decks (and anywhere else) in the forums. Will it see play in Standard?

In the meanwhile I have to go look through Gatherer for some good Bant-colored Commanders for an Enchantressy Commander deck that is brewing in my head right now. Commander may be the last thing I think about when looking at a new card, but it's the one I will be chewing on the longest!