iven my long-standing fascination with a certain blue cantrip from Judgement it should come as no surprise that I got to preview the card Thought Scour. Just look at the decks I have been drafting lately with Mulch and flashback cards and you can see where it fits in perfectly for that strategy—so perfectly that I have even been playing a version of that deck in Standard. Thought Scour will slot perfectly into that deck and...

Thought Scour was previewed elsewhere and I just dreamt that I got to talk about that card? That explains why the preview note from my editor was hand delivered to my door by a Werebear. I guess I will have to wait until next week to show off my Spidey Senseless deck for Standard with its four copies of Thought Scour. In the meantime, I have made a Mental Note to make sure that new editor Trick Jarrett got my welcome basket when he got to Renton earlier this winter and to stop obsessively checking the card image gallery for some sign of a Centaur Chieftain reprint before bed. 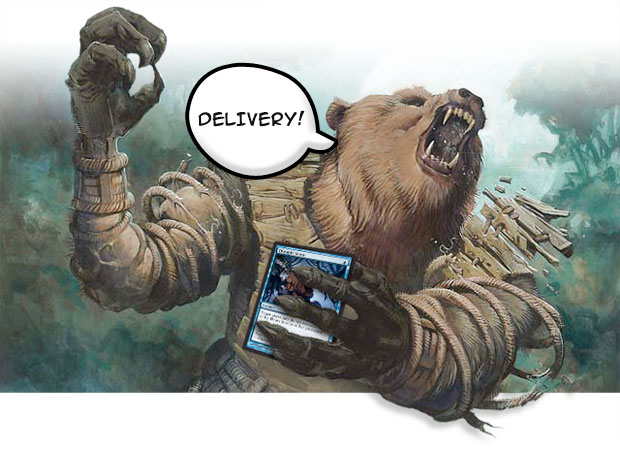 My Dark Ascension preview card is one I am hoping to open next weekend at my local Prerelease. I recall a long-ago Shadowmoor draft with Dave Williams, in which I was certain I was going to win the match, then in Game 3. As we entered the closing turns, I had carefully considered—although not carefully enough or I wouldn't be telling this story—what could possibly happen and decided it was right to keep attacking, as he was dead in two turns to my flying attackers. I had not taken much damage in the game and Dave could crack back and not quite get me to 10. Even with burn he was not going to be able to finish me off, and he was close enough that he would have to take out all my creatures to survive another turn.

I was pretty sure he would concede, but Dave played his land for the turn and attacked with everyone. I fell to 8 from 16 and waited for him to extend the hand. Instead, he played Wound Reflection—a card I had never seen anyone play in the format to that point—and waited for the grim reality of how things had actually played out sink in. He had effectively doubled his damage and won the game and the match. Wound Reflection quickly became a card I would keep my eye out for throughout that Limited format. It has also gone on to become one of those cards in Commander that you never want to see in play unless you are the player on the right side of it. Even then, you aren't always going to be happy since it encompasses all opponents and tends to make everyone look at you and ask questions about how much life you have left.

I present to you a card that is cheaper to cast, is only going to upset one person in your Commander game, and will win a lot of Limited matches next weekend during Prereleases: .

For Limited—and it is a rare so it will not come up frequently—this card has a lot to offer. Playing and evaluating rares in Draft is always tricky. Less experienced players tend to overvalue them, while more experienced players tend toward making safer picks if the rare is not a clear bomb, in order to take the essential building blocks for the decks that have proven themselves in the past. So if you open this Curse at the Prerelease, how do you want to play with it?

Obviously, any red deck worth its salt is going to be able to utilize this card quite easily, but some of red's creatures are going to be better than others. Skirsdag Cultist, Pitchburn Devils, and Rage Thrower immediately leap to mind. Sacrificing Pitchburn Devils to your Skirsdag Cultist to target cursed opponents takes care of half their starting life totals right there—4 from the Cultist and another 6 from the Devils. Rage Thrower already makes combat nigh impossible for your opponents, but with Curse of Bloodletting they have to kill the Rage Thrower on the spot or the game is all but over. If they don't block they take double damage from all your critters, and if they do block they take 4 damage for each creature that hits the bin. 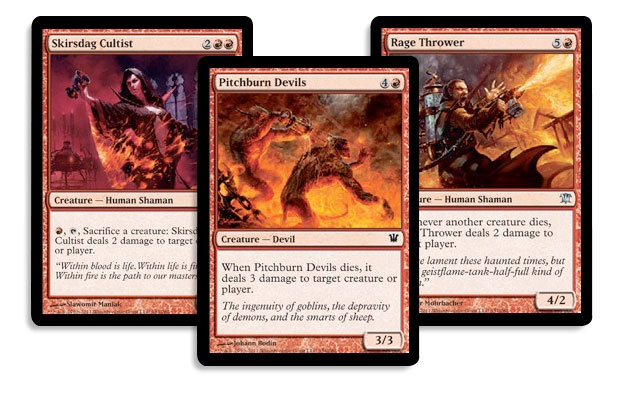 On the rare occasions that I have not been green-blue in the current draft format I have gotten a lot of mileage out Feral Ridgewolf. The pumpable, trampling creature is never Plan A, but it has won more than a handful of drafts where I had to scramble for a backup plan when the green-blue building blocks are getting cut off. Combat math gets hard when you have to account for double damage that is trampling over. It is very easy to imagine a board state that forces players to throw more creatures than they would otherwise care to in front of the lowly Ridgewolf.

Anyone who has played a game of Innistrad Limited is well familiar with the specter of Brimstone Volley that looms over any game against a Mountain-wielding opponent. If you have a Curse of Bloodletting on you, a creature dying in combat because you didn't want to take 8 damage from a hasty Hellrider could mean 10 damage—10 DAMAGE!!!—from a post-combat Brimstone Volley.

That interaction alone is what makes me think the card could make the leap to sixty-card formats in a Big Red deck. Two copies of Brimstone Volley—and keep in mind that can often just be one actual copy of the card thanks to Snapcaster Mage—can take an opponent from 20 to 0 at instant speed. Devil's Play, seven mana, and Curse of Bloodletting is all you need to kill an opponent. The first casting of the card deals 12 damage and flashing it back yields the other 8. If there is a Big Red block-constructed deck I would not be at all surprised to see those two cards at the center of it.

Standard seems a tad aggressive for a five-mana curse at the moment, but my mind keeps wandering back to attacking for 8 with a Koth-fueled Mountain and finishing people off with a Shrine of Burning Rage with 6 counters on it... 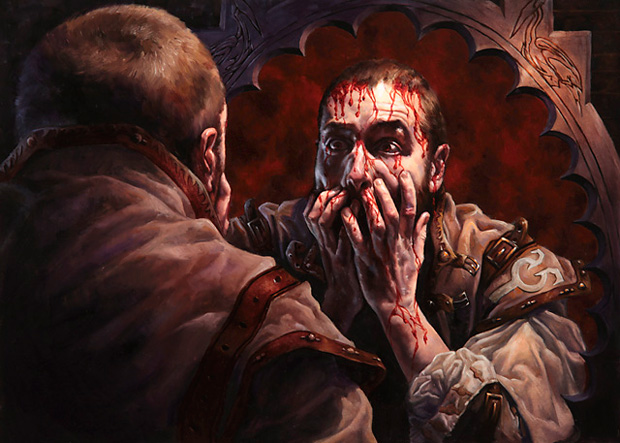 At first glance, this card is far less powerful in Commander than Wound Reflections, since it only curses an individual player, but depending on your play group that can be a benefit rather than a detractor. Wound Reflection is the type of card that draws the fire of the entire table—since it affects the entire table—but Curse of Bloodletting is more of a "win friends and influence people" type of card. It can be used to gang up on someone in danger of assembling a fiendish combination or to bloody the waters around another player to get the sharks away from you. Whether it is in a forty-, sixty-, or ninety-nine-card deck, I can see myself trying this card out in a lot of different builds.

Pro Tour Dark Ascension is looming in just a couple of weeks, before the remainder of the first season of Grand Prix resumes in Lincoln, Nebraska, and Kobe, Japan, a week later. That first season will carry us right up until Avacyn Restored gets added to the mix for the second season of the year. Check out the formats for the second leg of the year below:

As you can see, the season kicks off with one final Limited Grand Prix in Manchester that will be played with Innistrad and Dark Ascension before we head into a break for the Avacyn Restored Prerelease, launch parties, and Pro Tour Avacyn Restored in Barcelona, Spain. That next weekend after the Pro Tour we'll get to see the new set in all its glory with a Limited Grand Prix in Sweden and a Standard event in Minneapolis.

Next up on the format parade will be Innistrad Block Constructed—as players get to build on the successful decks on display at the PT in Barcelona—broadcast live from Los Angeles. A rare weekend off from the Grand Prix schedule is followed up by a Standard event from the Philipines before a double Grand Prix weekend of Modern from Japan and Avacyn Restored from Vancouver (which is likely to have an unusually high number of Wizards of the Coast personnel on hand due to its proximity to Renton).

Atlanta will play host to a Legacy Grand Prix—the first of two on the season—before a break for the release of Magic 2013. After all the festivities surrounding the release of the newest core set conclude, the Grand Prix schedule will resume with that Limited format on full display in San Paulo, Brazil—a rare Grand Prix that Paulo Vitor Damo da Rosa can take ground transportation to attend. That same weekend will see thousands of Europeans descend on Gent, Belgium, for the second Legacy-format GP of the season.

The season rounds out with Modern in Columbus—any time there is a Grand Prix in that city there is an opportunity to set an attendance record—and Magic 2013 Limited in Shanghai and Boston—a city which once had 1,500 people show up for a Core Set Limited Grand Prix.

I am already consulting my calendar for which ones I am attending—and maybe even a couple to play in—as the Magic year hits its stride.