his past weekend was a busy one, chock full of Magic events all around the world. As the Pro Tour Qualifier season for Amsterdam winds down the Nationals season is just kicking into full gear. In North America alone there were more than 1800 unique players vying for a precious blue envelope at ten different PTQs across the continent. The lowest reported attendance number was a hearty 100 in the remote reaches of Rochester on Sunday with a staggering high of 297 in Edison, New Jersey the day before.

Mike Flores recounted the various archetypes that did well last weekend—and you can find all the deck lists from the whole PTQ season here—but I wanted to take a moment to congratulate those who will be flying to Amsterdam to compete, on Hasbro's dime, at the end of this summer. Well done, gentlemen. 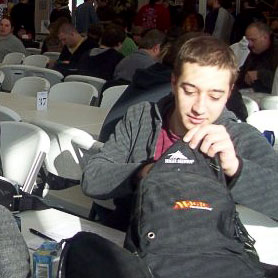 I played—briefly—in the Edison event and left long before the Top 8 was set, but I caught up with Nick Spagnolo as he was finalizing the details for his celebratory community cake. The twenty-year-old Brooklyn native has been playing Magic since Invasion, but it has only been since the release of Shadowmoor that he has taken to the East Coast PTQ circuit. Barely a weekend goes by that Nick is not attempting to grind his way back onto the Pro Tour at any PTQ within driving distance of New York.

The PTQ at Grand Prix–Boston qualified him for Pro Tour–Austin, where he did not get his professional Magic career off to a roaring start. Although the experience has left him much more confident and prepared for what lies ahead in Amsterdam.

"I was really nervous going into Austin," admitted Nick. "But I learned that everyone else is just a Magic player—Pro Tour or not. It was especially intimidating at first. This was the Pro Tour and I wanted to be here for so long, but after I got past my initial anxiety it felt like I was just playing Magic. In the first round I played Mark Dictus, who had the highest finishing Martyr of Sands deck, but that was about it. I started out 0-4 and finished up at 3-5. I definitely didn't get a lot of chances to play against any big name Pros."

His previous efforts to qualify this season included five other PTQs with two earlier Top 8 finishes. Until the release of M11, he came to each of those five PTQs with Super Friends by his side. 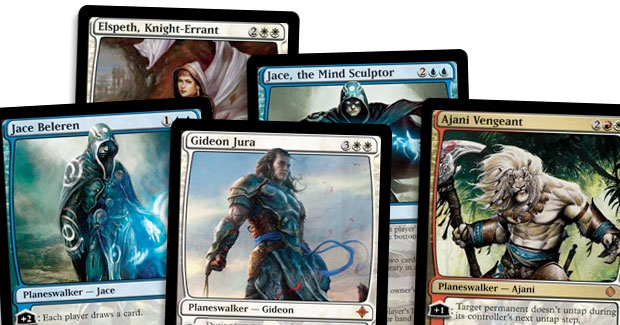 "At the very start of the season I was coming off of a short, month-long hiatus. I went to Grand Prix–DC with my friend Lewis Laskin, who had just won a Star City Games.com Standard Open with Super Friends," said Nick, who learned to play the deck from his friend. "I played Super Friends in the Grand Prix and I went X-2-1—the unintentional draw locked me out of Day Two. I played with it in the PTQ the next day and did really well. I just stuck with Super Friends for the rest of the season. All the cards felt so good, I don't know why I would be playing anything else."

2 Brave the Elements 4 Path to Exile

Despite his success with the planeswalker control deck he abandoned that strategy in lieu of a more traditional White-Blue control deck packed with countermagic and card drawing.

"Mana Leak and Jace's Ingenuity give you a lot more options at instant speed and lets you play a whole different style of deck," said Nick. "You need some instant-speed card draw to be able to play counterspells. I played with eight counterspells—4 Mana Leak and 4 Cancel."

Mana Leak played an important role in the deck, but Nick also wanted to make sure his deck had hard counters for anything from Primeval Titan to Jace, the Mind Sculptor. The former was especially important to have a hard answer to since it is played in a deck designed to get abundant mana into play. 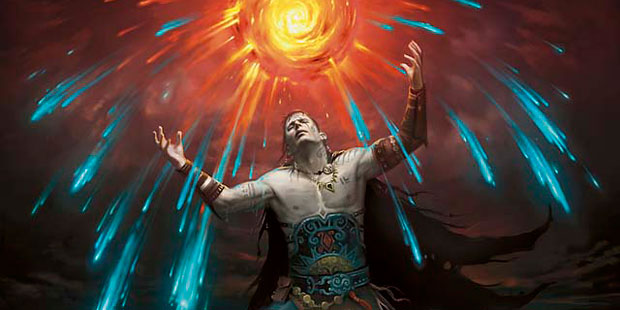 "They can just play Primeval Titan with nine mana and pay for the Mana Leak and then they have eleven lands in play," shuddered Nick, who went on to explain why he needed both Cancel and the new option from M11. "Mana Leak is really important for winning counter wars—like when you are fighting over Jace, the Mind Sculptor, which is what a lot of your matches come down to when you are playing white-blue. Mana Leak just makes all your other counterspells better, as well as your instant-speed card drawing. When you are leaving up mana, if they are playing around your counters you can just draw three cards at the end of their turn."

According to Nick the control decks have drifted toward the so-called "tap-out" style over the pre-M11 portion of the season. While he loves having Jace's Ingenuity in his arsenal for this deck, he explained why a card like Mysteries of the Deep never made the cut early in the season.

"Super Friends was really a "tap-out" style of control deck and drawing three cards was just not as good as tapping out to play Baneslayer, or Gideon, or the best spell you could muster. Eventually your opponent would not be able to deal with one of them and they would just take over the game," he said. 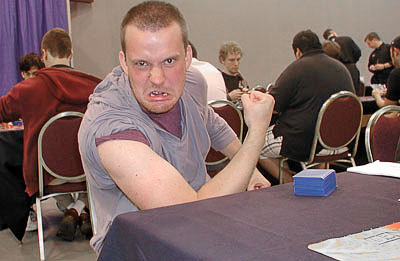 In the Top 8, Nick had, what he described as, easy match-ups against Naya and Jund before squaring off with Building on a Budget columnist Jacob Van Lunen in the finals. Jacob, half of the Pro Tour–San Diego 2007 winning team, was playing his competitively updated version of the Pyromancer Ascension deck that he debuted in last week's column. Game 1 was a huge blowout in Jake's favor.

"I could not really do anything," recalled Nick, as his hand was choked with dead creature-removal spells while Jake got to take all the turns he needed to finally finish Nick off. "I had to side in my Kor Firewalkers as a 2/2 for two just to get those cards out of my deck. I barely won the match by the skin of my teeth. By the time he got set up in Game 3, he did not have enough cards left in his library to finish me off with Jace." 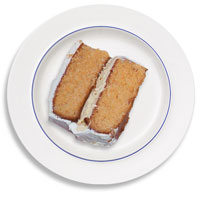 It is New York tradition that whenever a player wins a PTQ they must buy cake, going back to the early days of Steve Sadin's Magic career when he finally qualified for a Japanese Pro Tour. Back then it was customary to buy ice cream cake. With the dog days of summer hanging heavy over the city, Nick explained that he would be forgoing posh cupcakes and alchemical Ice Box concoctions for the old favorite—vanilla ice cream cake. Hopefully with some blue frosting.

In addition to the PTQs going on here, abroad, and online there were also Nationals Championships taking place in Canada, France, Australia, Austria, Costa Rica, Guatemala, Romania, Malaysia, and El Salvador. The first three events were featured on the mothership, and the coverage of these events (all three of which produced teams well-positioned for the Team Competition at Worlds) can be found here. 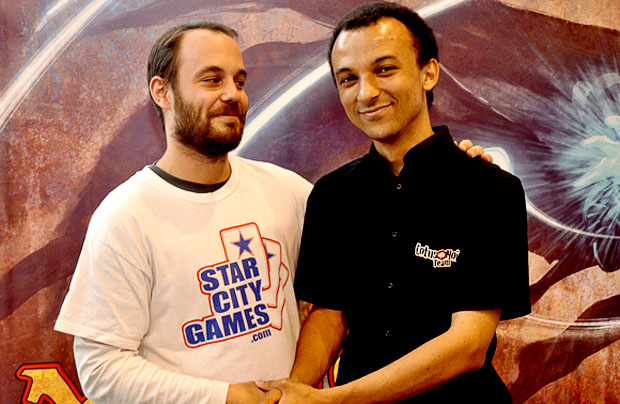 In France, the Top 8 had four well-known players vying for three spots on the National team, while four other players were looking to sneak in and make their name alongside some of the game's all-time greats. Hall of Famer Antoine Ruel has been playing in French Nationals for fourteen years without ever representing France in the Team Competition. He had to face off against none other than Guillaume Wafo-Tapa in the playoff for the last spot. Guillaume, close friends with Antoine, chose to put the Hall of Famer onto the team with a concession. 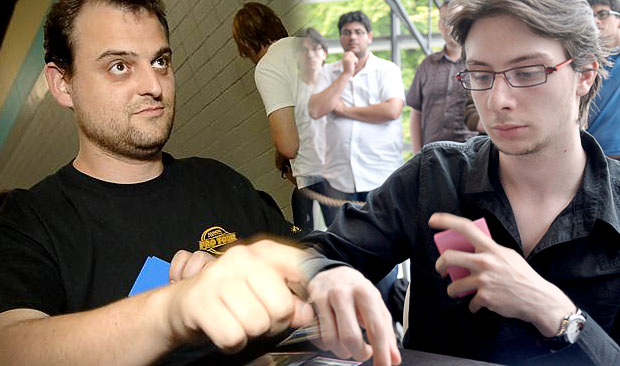 Antoine joins Pro Tour–San Juan finalist Guillaume Matignon and twenty-year-old Champion Julian Parez on a formidable French National team. While Parez does not have the pedigree of the other two players, he is no stranger to high-level competition and has finished in the Top 32 of GP–Lyon and Top 64 of GP–Paris—two of the biggest events a player can compete in.

Fresh off of winning hundreds of thousands of dollars at the World Series of Poker main event, Pro Tour–Columbus winner Pierre Canali—who worked with both Guillaume's for his Pro Tour debut in Ohio—ground into French Nationals only to finish 9th in the main event. 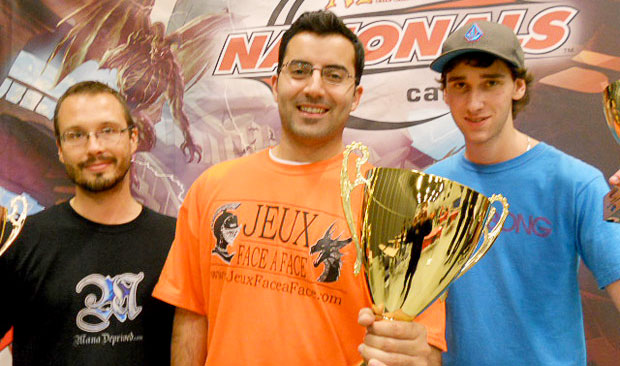 In last week's column, Lucas Siow highlighted Vincent Thibeault as one of the players to watch out for at Canadian Nationals. One of the co-founders of ManaDeprived.com, Vincent more than lived up to the prediction with only Jay Elarar standing in his path to becoming the Canadian National Champion. It is Jay's second time helming the Canadian team. Jay was disqualified at last year's World Championships and both Vince and third team member Pascal Maynard will be looking forward to a better performance at this year's event. 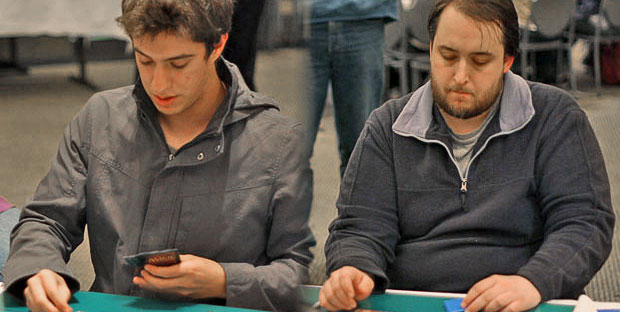 Making the Top 8 at Australian Nationals is nothing new for Jeremy Neeman, although actually making it onto the team is a new wrinkle. In 2008, Jeremy lost in the quarterfinals to Justin Cheung who would go on to make an Australian team that lost in the Finals of the Team Championship. Last season, he lost in the semifinals to Ian Wood—his teammate on this year's team—and then again in the 3rd/4th playoff to Hugh Glanville.

Jeremy, fresh off making the Top 8 of Pro Tour–San Juan, can now add Australian team member to his rapidly expanding resume. If he wants to add National Champion he will have to wait until next year, as it was the relatively unknown Adam Witton who got to hoist the trophy.

Nationals competition continues this weekend from Italy, with coverage from Andrea Vitali and Buno Panara on this very site.

The Second-Best Night of the Week

Starting August 5, every Thursday at 10 a.m., 3 p.m., and 8 p.m. Pacific time casual three-round events will start, with each week featuring a different format (Booster Draft, 4-Booster Sealed Deck, 6-Booster Sealed Deck, and various Constructed formats). Plus each person who participates gets a digital copy of that month's FNM promo card, and top finishers will get a foil version of that card. Normally I'd wait until next week to unveil the card, but since it came up...next month's FNM promo is Krosan Grip! 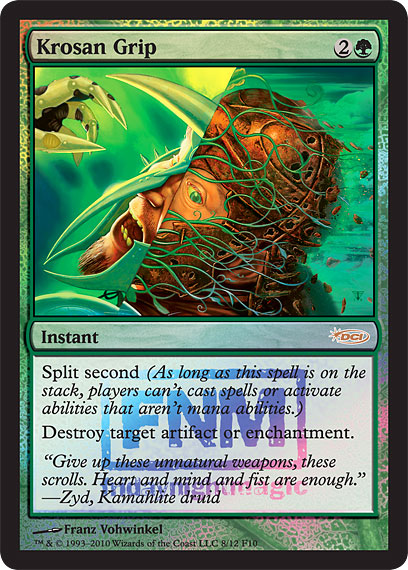