f you're one of those people who check this web site as soon as the new articles go live, and happen to live in the Eastern Standard Time Zone, then there are 24 hours to go before you will have a chance to crack open some shiny new Eventide packs at midnight Prereleases like the one taking place here in New York City. I cannot help but linger over images of cards that could potentially be in my Sealed Deck pool this weekend in the Eventide Visual Spoiler.

The nature of this column is such that it does not get assigned a preview but there are so many cards posted to the visual spoiler at this point that I can't imagine there were many more to go around. Here are some (hopefully) helpful hints if you are going to be taking part in a Prerelease tournament this weekend or a Launch Party event later on this month.

I know multiple tournament veterans who have been considering playing as many as 19 lands in their Eventide Sealed decks to enable frequent reuse of powerful retrace spells in their card pool. Whether you are packing the cheap utility of Flame Jab or the game-breaking inevitability of Call of the Skybreaker, as long as you have a retrace spell in your graveyard, every land you draw becomes a spell.

I don't know if 19 lands is the answer or not but certainly any card that is the equivalent of a land will suddenly go up in value. Safewright Quest is much more appealing when it can be played to get a Plains, get a Forest, or just power up a well-timed Flame Jab. It was recently pointed out to me by Gabe Carlton-Barnes that no card will do a better job of fueling retrace than Endless Horizons. 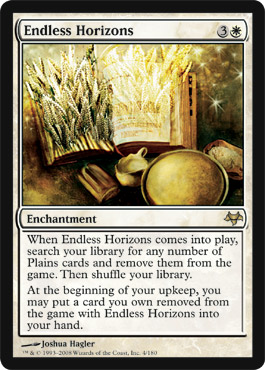 Not only will this card function as a Mana Severance to ensure that the normal cards you draw each turn is game relevant but the land you draw each turn from the enchantment can be a virtual spell thanks to the retrace mechanic—essentially giving you two action spells a turn. There has already been plenty of speculation about turning over the retrace engine in Extended with Life from the Loam as the key to the ignition. If retrace is going to have any impact on smaller Constructed formats like Standard and Block, I would not be surprised to see Endless Horizons be a big part of the reason why.

When you're playing out your matches this weekend, try to keep your retrace spells in mind as you play out your lands. Once you're able to play the key spells in your deck you should start to hold back on playing out your lands. It's more than just a sheer volume of lands too—it's also having them in the right colors. If you're waiting for a third black mana—despite being able to play everything else in your deck—in order to cast a Wasp Lancer, think about whether or not you really need to be playing that Forest which could allow you to retrace a Worm Harvest to clog up the ground or kill yet another legendary monster with Spitting Image.

It's always interesting to gauge players' interest in new cards at these events. I will be keeping a close eye on Glen Elendra Archmage. There are already a handful of 2/2s for four mana vying for playing time in Constructed—think Sower of Temptation and Venser, Shaper Savant—but if the Faerie deck wasn't already formidable, it potentially gains a brand new form of countermagic against board-sweeping spells like Austere Command and Firespout. To make things even more challenging for the enemies of the Fae this card has persist which means it comes back to foil their plans again. I have a feeling this card is going to be at the top of many people's want lists and will be in high demand by traders. 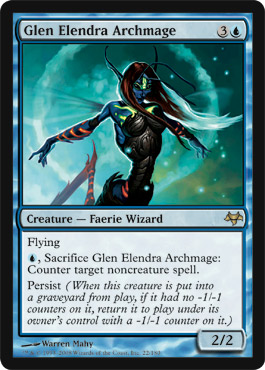 My first reaction whenever I see a card like this is to start flipping through a list of split second spells but Sudden Shock does not really cut the mustard here since the Archmage will persist on after it. The burn spell players may want to be looking toward—assuming you can catch the Faerie player tapped out—is Puncture Bolt. Puncture Bolt is a card that could lead to some exciting blowout scenarios this weekend thanks to Necroskitter. 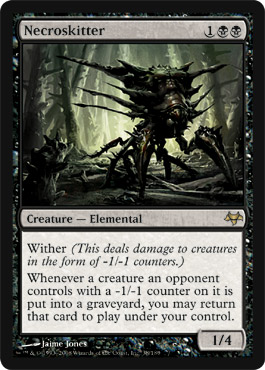 Necroskitter is an Elemental that plays well with the likes of Incremental Blight, Puncture Bolt, and Midnight Banshee from Shadowmoor. Who knows what other -1/-1 goodies lie in waiting within Eventide to allow you to shanghai your opponent's creatures into your service?

There are a handful of combos that begin in Shadowmoor and are completed in Eventide. Two in particular have leapt out at me from the spoiler. The first is simply any one of my untappy favorites from Shadowmoor—from Puresight Merrow to the flying Hawaiian itself Pili-Pala—and the common Banishing Knack. Under normal circumstances Banishing Knack is a less easily used Unsummon, but with sufficient mana it can be a one-sided Evacuation.

It is better than Evacuation really since you can bounce any nonland permanent including Prison Term, Curse of Chains, or Torpor Dust. It does not even need to be that dramatic since the Knack is an instant. With seven mana you can use your Safehold Sentry to bounce two key blockers at the end of your opponent's turn, untap and—hopefully—swing in for the kill. 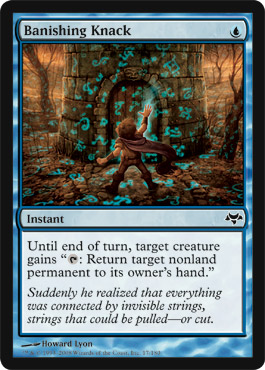 The combo that I am almost loath to write about is a potential turn-three kill in Limited. Quillspike is an obviously exciting card that can give your opponent fits if you have any of the good persist creatures like Kitchen Finks, Murderous Redcap, or the aforementioned Glen Elendra Archmage—assuming your opponent has plenty of non-creature spells for you to counter. With the Redcap you can even use the stack to your advantage to get a little extra damage out of the Goblin Assassin. When your Redcap persists back into play you can put the "comes into play" ability on the stack, make your Quillspike bigger, and have your 2/2 Redcap deal 2 damage to target creature or player—and you can do it all again and again.

Since the Quillspike requires green or black mana to activate you can create an infinite amount of activations with a lowly Devoted Druid. Tap your Druid floating

, untap it and use the

to remove the counter from the Druid with Quillspike. You can do this again and again until you have created an arbitrarily large Beast and then attack for the win. Obviously if you have Quillspike and Druid in play your opponent is not likely to leave themselves without a chump blocker. Of course if they don't have a wither creature or a regenerator, they are going to find themselves locked under a two-card The Abyss. 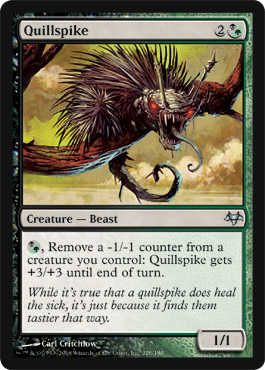 Remember I said this was a potential turn-three kill in Limited? Allow me to present the following scenario. Assume you have played a Devoted Druid on turn two and your opponent has passed their second turn without a play. You tap your Druid and two lands to play the Quillspike. Tap your remaining land to play Crimson Wisps on your 'Spike and you have a Channel / Fireball kill that no one saw coming.

If anyone manages to pull off this feat this weekend, please send in a picture—to either me or Steve Sadin—and an account of the kill!

Don't forget to check the Top 8 Decklists page for the recent inclusions from the current PTQ season. I am always excited to see players I know and like do well but I was even more pleased than usual when I saw that Gavin Verhey had earned a blue envelope to Berlin this past weekend. Gavin is a tremendous community advocate, a producer of top-notch Magic content with his Magic podcast, and an up-and-coming player who will finally get his shot at the Pro Tour this fall. You can check out the deck lists here and be sure to tune in next week for an in-depth interview with this Northwest PTQ stalwart. 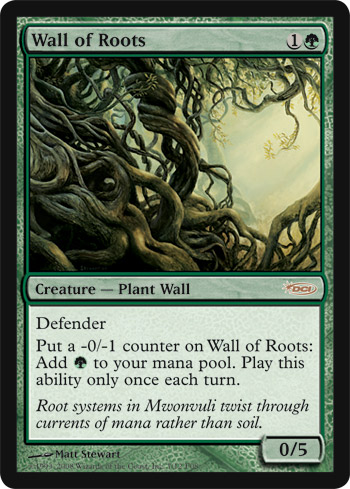 Many of you already know this—and have no doubt already won one these bad boys—but if you did not get out to Friday Night Magic last week you missed an opportunity to win this spiffy new version of Wall of Roots. This card, most recently seen in Quick 'N Toast, is a tournament staple and well worth the trip to your local game store... especially since you can win one just for showing up!

What cards will you have your eye out for when you attend your local Prerelease or Launch Party? Head to the forums and share your assessment of the new set. I would also love to hear what cards you think are the most likely to have an impact on Constructed. Good luck to everyone playing this weekend. Maybe I will see you in New York on Saturday!