Get Your Heads Together

Saturday and Sunday marks the final regular weekend of Two-Headed Giant qualifiers for Pro Tour–San Diego. There may be a straggling event hanging out here or there and there is always the Last Chance Qualifier on the Thursday before the event, but by and large this coming weekend is realistically your last chance to qualify.

Don't you want a free trip to San Diego?In New York City, Neutral Ground played host to a 74-team event that represented the final shot for my area. After some last-minute team roster changes, I ended up playing with Paul Jordan. Paul has done well with a great variety of teams in seasons past and even won some money with me at Grand Prix–New Jersey in 2002 when we finished in eighth place.

Mike Flores also played, teaming with the allegedly retired Josh Ravitz. Both Paul and Mike had also experienced financial reward for playing Magic with Josh on their team over the years. Yet between the four of us we managed to cobble together a solitary win and were all drafting by the start of the fourth round.

While we were passing the packs, former Nationals Top 8 competitor and FinkelDraft regular Chris Manning and World's Strongest Magic Player Eric Berger (also of the FinkelDrafts) were running the table to perfect 10-0 records—eschewing the final round intentional draw and winning the two rounds of elimination—and earning an invite to San Diego.

The Swiss rounds utilized a Time Spiral Tournament Pack and two packs each of Planar Chaos and Future Sight. Two-Headed Giant draft is not a format many players have experience with and with Future Sight added to the mix, the correct strategies were even less established. On one hand Storm gained some great enablers with Grinning Ignus and the cycle of recurring suspend cards, but losing two packs of Empties, Ignites, Grapeshots, and Volcanic Awakenings meant there were fewer cards to grin over. 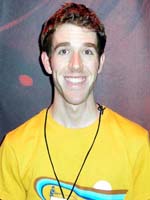 Chris ManningHoming Sliver is utterly amazing if you have a deck with Watcher, Psionic, Telekinetic, Might, Pulmonic, or any top-shelf sliver ... but once again that card's presence in the draft format meant there'd be two fewer packs of Time Spiral, the set that offered up the best creatures slivers have to offer.

Chris is no stranger to Two-Headed Giant, having won New York Champs two years back. I asked him how he approached the draft as he and Berger sat down at the final table. The former 2HG Champ said he went in looking for slivers and Storm but kept his options open and ended up going for the oldest strategy in the book...

"We took an early Spinneret when there wasn't much else," Manning explained, "but we saw no good Slivers at all; nothing better than say a Venser or a Two-Headed so we gave up on that. We saw only one Storm card, Ignite Memories, and there were better cards so we gave up on that too. So what did we draft? Removal, lots of it. Unfortunately we had almost no evasion besides the Moti that can be a morph and a Spiketail Drakeling.

"One deck was red-blue with lots of burn and card drawing including our lucky pull of Molten Disaster, and the other deck was green-black-white with removal and a Thallid sub-theme (two Deathspores, Germinator, Psychotrope, and the Pallid Mycoderm)."

They came up against a sliver deck in their semifinal match but were able to kill every single creature they saw from one head while their opponent's other head tried to recover from a decision to keep a so-so hand. An early Essence Warden in the finals led to a locked up board with an army of fatties on the other side of the table that also featured the nigh-unkillable Penumbra Spider, a Saltfield Recluse, and the pesky Thornweald Archer.

"We were holding them back with Hedge Troll plus a bunch of random creatures," Chris recalled of the finals. "At some point we decided to go on the burn plan. When their one living Recluse was tapped, Berger Ana Battlemaged a 5/5. Then he Whitemane Lioned it and did it again later on. I used Rift Bolt on them, then Riddled them for four. I bounced Berger's Ana Battlemage again and we were able to Molten Disaster for 7 to deal them 14 and we were still very high because of Warden."

Recent changes in the floor rules made it so that the team playing first no longer draws a card. In the past, the team playing first had their B player draw a card at the start of the game, providing a tremendous advantage to the team on the play. There was not a consensus about what to do upon winning the die roll at the PTQ. Paul and I wanted to draw for a number of reasons but it seemed like many of the players wanted to kick things off.

Manning laughed when I asked how his team came to the decision to draw first throughout the Swiss: "I tend to draw a lot even in singles so it was kind of an extension of that philosophy."

Manning's and Berger's win means that five of the regular players at the FinkelDrafts are now qualified for San Diego. Steve OMS and Matt Wang are qualified from their win (and their rating) at Grand Prix–Massachusetts while Jon Finkel is qualified as a Hall of Famer and eligible to bring anyone he likes. Depending on whom Jon chooses to play with at the event (assuming he decides to go), that could boost the tally up to six.

Jon is not the only veteran that Pro Tour watchers should be keeping their eyes out for come San Diego. It seems like the fun and friendly format has lured a number of prominent players back to the Pro Tour. While Mike and I were not able to carry the good name of Magicthegathering.com into the Pro Tour, your Saturday School teacher Jeff Cunningham dragged Aeo Paquette back into the game after a long absence. Aeo managed to put up two Pro Tour Top 8s in a ridiculously small sample of events, so both he and Jeff will be in good hands. Also winning a PTQ over the course of this season is the always-entertaining combo of Gabe Walls and Neil Reeves. 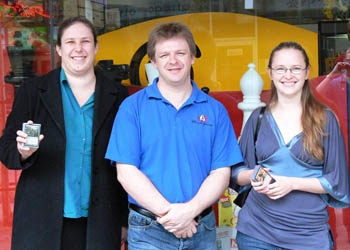 Ellie, left, and Emily pose with tournament organizer Glenn Doyle. While the format has been a boon for veteran players looking for a fun way to interact with their friends, Two-Headed Giant has also proved to be a powerful tool for more experienced players to introduce interested friends to the game's competitive side. The best example of this comes from Australia, where Ellie Filler and Emily Jehne won a PTQ in Canberra.

Now before you accuse me of sexism for trumpeting that two women won a PTQ, let me stop you in your tracks—that is not the point of this anecdote. What makes this story is the fact that Emily signed up for her DCI number before the event and had never experienced the game in any competitive form prior to Round One.

Ellie described the results via email as a fairy tale: "The basics of the story: Emily signed up for her DCI number yesterday morning. She'd never played a game of Magic before. I'd explained the rules a little in the car on the way—and she's looked at my cards before (because she likes the art), but she'd never actually played. And—with a fresh slate—her 2HG rating was already a good 10-20 points higher than mine. End of the evening, I think she must be the newest Magic player to ever qualify for a Pro Tour... though I must be coming close myself!"

Even though Ellie does not expect to do well at the pro level, she was truly excited about the opportunity to travel around the world by virtue of playing a card game.

"We'd had a light-hearted discussion of what we'd do if we won. We decided there was no chance in Hell we were going to, but that if we did, we'd take the tickets, and see America (she went there on choir tour last year, but I've never been). So yes, we're going to be attending your event in San Diego—two girls; one with experience that stretches all the way back to the Time Spiral prerelease (oh, plus a couple of months of high school rules playing in Tempest block), and one who started playing yesterday. We'd be absolutely delighted to accept the invitation!"

Don't forget to keep an eye peeled this weekend for all the coverage from Grand Prix–Strasbourg as all the Pros from Europe and Japan converge to get a redo on the Time Spiral Block Constructed format from the Pro Tour in Yokohama. Keep another eye peeled for Legacy coverage from Grand Prix–Columbus and see if Flash is all it has been hyped up to be.

Firestarter: Do I play or do I draw now?

How much is an extra card worth? What about two extra cards? In the new Two-Headed Giant, players on the draw start with 16 cards for their team versus the 14 for the playing team. Just one card for the team on the play was enough to achieve universal alignment in the play-camp. Will the loss of that one card be enough to make people draw? Go to the forums and share your ideas on the topic.