Getting to the Core of Commander (or, Cheating to Jin)

he release of a new Magic set means it is time to look for potential upgrades in the starting 99 of my Momir Vig, Simic Visionary Commander deck. Mirrodin Besieged caused a significant amount of turnover with Consecrated Sphinx, Green Sun's Zenith, Blue Sun's Zenith, Lead the Stampede, Praetor's Counsel, and Thrun, the Last Troll all getting sleeved up and doing hard work for me ever since. After looking through the New Phyrexia Card Image Gallery, I found a handful of cards that are jockeying for position in Momir—and other decks—but one card in particular is really calling out to me. 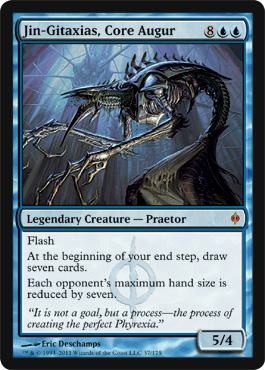 Jin-Gitaxias, Core Augur is one of those cards that is sure to be at the top of Commander players' wish lists at the upcoming Prerelease events—blue ones, anyway—and I have already cleared a sleeve for him in my deck (Thrun, we hardly knew ye). I like this card so much I have already learned how to spell it! This is a card that would have me considering Flash and Winding Canyons—if he didn't already have flash! Slamming Jin-Gitaxias onto the battlefield during an opponent's end step is going to quickly become one of the most back-breaking things you can do in the format. 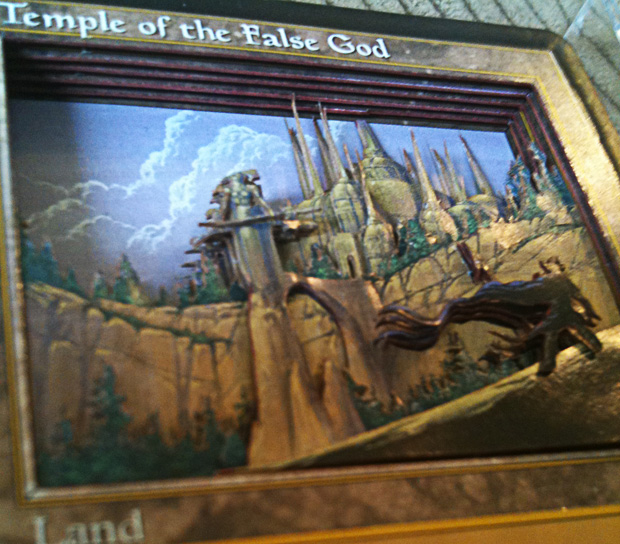 One of the ways I'll be getting to ten mana.

While ten mana is going to be prohibitive for formats like Standard, it is a common occurrence in Commander where players pack their decks with Signets, bounce lands, Temple of the False God, Sol Ring, Worn Powerstone, Solemn Simulacrum, and just about every non-Mox mana accelerate ever printed. I may play even more than most, with the likes of Yavimaya Granger, Coiling Oracle, Oracle of Mul Daya, and the always sneaky Crop Rotation for Gaea's Cradle.

Yeah, ten mana is not going to be a problem. I have already seen some Twitter-chatter about playing Jin-Gitaxias in a Standard reanimator strategy with Rise from the Grave, so don't be surprised if the ten mana problem gets circumvented in 60-card formats once that pesky Spell Pierce rotates out of Standard.

In Commander, players are looking to do big things and often find themselves tapping out during their turn to play giant monsters or kill giant monsters other players have tapped out to play on previous turns. It is not going to be difficult to find a window where everyone is tapped low having expended their resources in flurry of big plays, and then have Jin-Gitaxias come crashing through the wall next to that window. 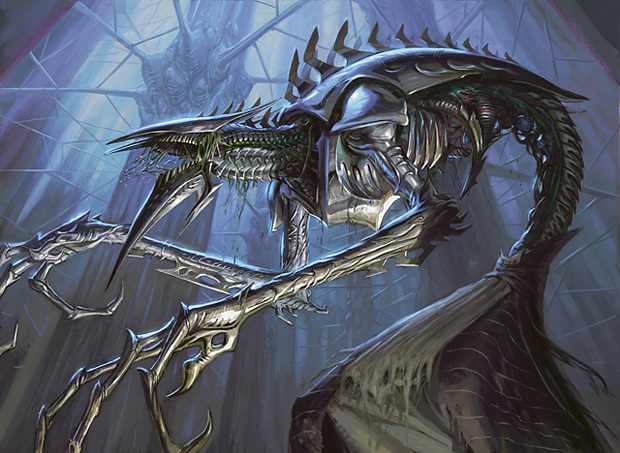 The player who took the last turn before you is going to discard down to zero cards, you get to untap, and then at the end of your turn you draw seven cards to defend your position. Even if the next player in the turn sequence can do something you are forcing the action, have caused one player (hopefully Sheldon Menery) to discard all the cards he or she had been holding for their own big turn, and you drew seven cards. And if you can defend the card for one pass around the table? If you can't win that game then it is time to try another format.

Paying ten mana is all well and good, but if I can cheat to Jin all the better. One the most memorable Commander games I have ever played came while spellslinging at the Mirrodin Besieged Prerelease. My opponent played a turn-five Identity Crisis on me while I was holding seven cards and he had Phyrexian Arena on the battlefield. I had just tapped out to cast Lurking Predators. I resolved my trigger from his game-breaking sorcery and slammed Consecrated Sphinx onto the table for free. A couple of turns later of drawing five cards every turn sequence, I was holstering the deck and notching my deck case with another win.

I am looking forward to having a Jin-Gitaxias lurking near the top of my deck sometime soon. I recently added Soothsaying to my deck, which has made Lurking Predators—already a fearsome card in Commander that you should absolutely be playing—into a precision weapon that rarely if ever misses when both cards are on the board.

Another card that tandems nicely with Soothsaying for pseudo-cheats is Mosswort Bridge. It is pretty nice when you can set up the top of your deck with Soothsaying or Jace, the Mind Sculptor and know exactly what card you will be hiding away. I love Bridge in my deck since I can often play it multiple times in the same game with Trade Routes, which allows me to pick up the expended land and recycle a free card every other turn. It can also just allow me to dig my way to a key creature or card more quickly if I don't want to wait for the Bridge to untap and am willing to just zip past four cards.

I expect that Jin-Gitaxias is the kind of card I am going to want to do that for, even if it is to just get the card out of my deck and away from the stench of Bribery that permeates the format. One of the downsides to this Praetor is that he will become the number-one Bribery target in my deck. My deck has been pretty resistant to rolling over to a Bribery, as most of my creatures are simply good and I have enough bounce and cards that exchange control of creatures that sometimes Bribery feels like they are doing me a favor—but with Jin-Gitaxias you just don't get much time to recover.

The only graft I want around my deck is on my Plaxcaster Frogling—or my own Bribery. Survival of the Fittest and Fauna Shaman may just be digging for Jin-Gitaxias long before I can cast it just to prevent something untoward happening—Jin can also be pitched to those cards where it can rest more or less safely in my graveyard until I can Restock it, or better yet grab a whole fistful of cards with Praetor's Counsel. I can also just use my general to pop Jin into my hand early on in the game.

Here's my Momir Vig deck as it stands before the addition of New Phyrexia:

Honestly I am excited for the entire cycle of Praetors when it comes to the Commander format. Sheoldred, Whispering One is going to be in just about every deck that can run her, and I fully expect to see plenty of mono-black decks with her as the Commander as soon as players can get their hands on the new set. 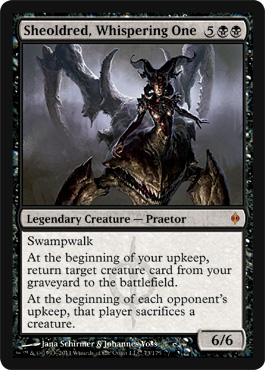 Jin-Gitaxias isn't the only card I am excited about for the format.

Karn Liberated is a windmill slam for my essentially removal-free green-blue deck and will probably be taking the spot currently occupied by Predator, Flagship. I have a sneaking suspicion that the first time someone plays this in a multiplayer game Karn could easily pull off his ultimate just because everyone will want to have been part of the experience. It is hard to imagine that most decks won't be auto-including Karn regardless of their plan, but for those of us looking at modest removal budgets it is a earthshaking card for the format. 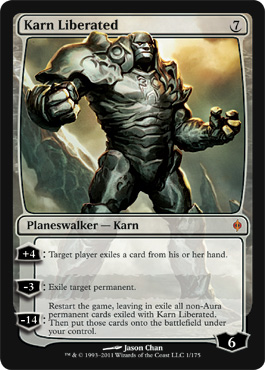 Speaking of removal spells for green... Beast Within much? Sorry, Groundskeeper. You are cute and all, and I love the combo with Trade Routes, but it is time to bench you for an honest-to-goodness removal spell—that is an instant! Vanilla 3/3 green creatures don't often get played in Commander and it is hardly going to be scary to give one to your opponent in exchange for killing a Debtors' Knell, lethally large Hamletback Goliath, or anything else that green has not been able to kill cheaply and quickly. I am going to be looking for a foily, foreign version of this card to take an unshakable spot in the starting roster. 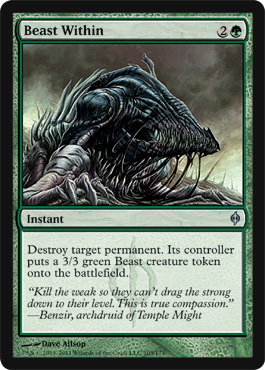 Why is the Simulacrum so Solemn about Commander these days? Well, Torpor Orb is going to be an annoying artifact that can come down early from just about any deck and cannot be killed with Acidic Slime, Manic Vandal, or any other card with an "enters the battlefield" clause. Cards like Solemn Simulacrum, Duplicant, Coiling Oracle, and countless others are rendered utterly vanilla by this card, and it should be a griefer staple in Commander. 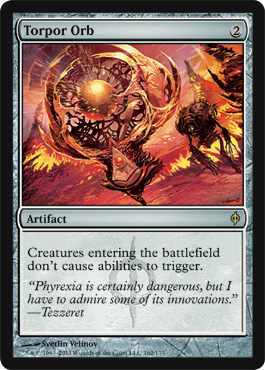 Make sure you check out the Card Image Gallery to see what cards you might want to be adding to your starting 99 and don't forget to attend a Prerelease next weekend. I will be playing in New York City and will likely have a tuned-up version of Momir—and possibly a brand-spanking-new deck as well—with me if anyone is looking to get a couple of games of Commander in during the afternoon. 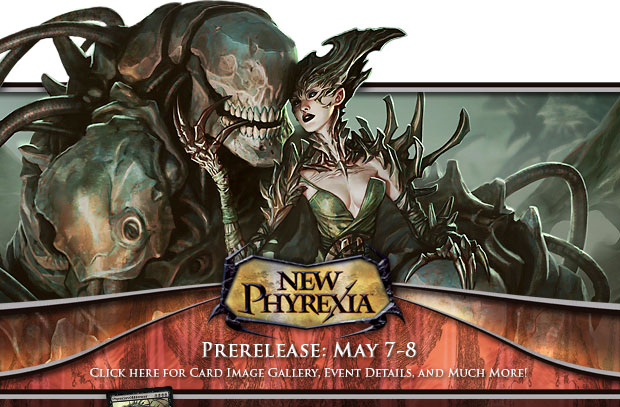