Little did he know that when he first picked up Magic, it would one day see him picking up a $40,000 check for playing a game that was immediately attractive to him—and just not for the beautiful artwork.

"A friend down the street introduced me to the game," explained Gindy in a post-tournament interview. "I really like math and I like the math part of game. I always had fun playing so I just played—a lot." 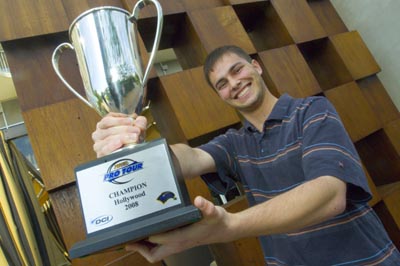 Gindy shows off his Hollywood hardware.It was not long before gaming at a casual level advanced to tournament level play when he was introduced to local tournaments and then PTQs by his friends. The decks that he played at this point were popular decks of the time, such as Counter Rebels, Fires, and NetherGo. By this point he was also able to pursue the Junior Super Series, although his performance at that level did not reflect his future success.

"I only qualified once and didn't do well," said Gindy.

Gindy has always been highly regarded by followers of the Team Rochester format for taking three different teams into the finals of three different Grand Prix tournaments. His first real taste of tournament success came at Grand Prix–Pittsburgh when he sat in between Jamie Duguid and Manny Orellana as Team Prodigy. They lost the last match of that weekend to Pro Tour finalists Illuminati (Alex Shvartsman, Justin Gary, and Rob Dougherty) but Gindy's easy command of the format more than lived up to the team's choice of name.

Next up for Gindy was Grand Prix–Washington D.C., which he and his teammates Bill Stead and Chris Fennell won as Thaaaat's Me. The team was clearly an underdog in a Top 4 peppered with Hall of Famers, Grand Prix and Pro Tour winners, and even a future WSOP bracelet winner. The other three teams playing in the elimination rounds featured Jon Finkel, Brian Kibler, Eric Froehlich, Darwin Kastle, Rob Dougherty, Alex Shvartsman, Osyp Lebedowicz, Patrick Sullivan, and Adam Horvath.

Gindy completed his trifecta of Grand Prix finals with a third different set of wingmen later that same season at Grand Prix–Chicago as Gindy's Sister Fan Club. He played alongside then 16 year-old Zach Parker and 18 year-old Adam Chambers. The team got past Josh Ravitz, Igor Frayman, and Chris Pikula (playing as The Max Fischer Players) in the semifinals but lost to the enigmatically named :B featuring Tim Aten, John Pelcak, and Gadiel Szleifer in the finals. 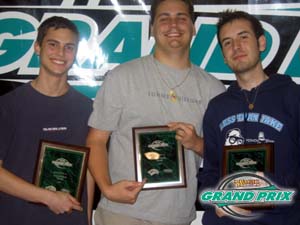 Gindy, left, with D.C. teammates Chris Fennell and Bill Stead back in 2004.Despite the loss it was clear that Gindy was a player to be reckoned with. Many observers of the game consider Team Rochester to among the most skill-testing formats in high-level Magic play and Gindy had shown that he had what it took to go toe to toe with the greats of the game in one of the game's toughest formats...although Gindy makes it sound deceptively simple.

"I always went in with a game plan and was willing to abandon the plan," said the Team Rochester master before adding: "Also pick landwalkers high...just general rules I followed. It was challenging and fun. Sometimes you set them up for bad matchups—it was a great mind game."

With a wide assortment of teammates to choose from it, could easily have been Gindy sitting in the Andrew Pacifico seat on the Pro Tour–Atlanta 2005 finalist team We Add. Gindy chose to play with his Washington D.C. teammates and finished exactly one spot out of the money while his Chicago teammate Adam Chambers got to rock the Taking Back Sunday shirt on Sunday in Atlanta.

"Well I already told Chris (Fennell) and Bill (Stead) I would play with them," explained Gindy when asked how he sorted out his teaming options. "My friend KK (Ken Krouner) bought me a ticket for Chicago so I played and got second with Zach (Parker) and (Adam) Chambers. We all still qualified and I told Chambers to play with Andrew (Pacifico) and Don Smith and they got second. I was thrilled for them."

While he did not stop playing after Atlanta, he did retreat to the virtual Magic landscape of Magic Online almost exclusively until the most recent PTQ season, when he found himself with suddenly hankering to get back onto the Pro Tour.

"Since Atlanta I have only played in two PTQs for fun," he explained. "This last season I really wanted to play. I played in a PTQ. I was planning on going to three more if necessary but I won the first one with TEPS. I missed traveling and gaming—it's fun. I played with my friends at my apartment on Magic Online for Extended. I played every deck to get a feel for the format, went to FNM to see what people were playing, and found out there was going to be a lot of Affinity and Red-green so I played TEPS."


With his qualification quickly in the books, it was time to turn his attention to the Standard format. In the early days of testing, Gindy was leaning toward a Green-red deck but switched to the deck he ultimately played based on the advice of an old friend.

"Three days before the PT I switched from Red-green to Elves as I thought it was more solid," said Gindy. He went on to confirm what many observers have wondered about regarding the true identity of Gindy's "Elf" deck: "And my friend KK told me to play Rock."

It was the presence of Chameleon Colossus—the telltale 4/4 for four—that really makes the deck feel like a classic Rock deck as opposed to Shuhei Nakamura's downsized version (which was glaringly devoid of shapeshifters). Gindy felt that the Colossus and his mana-fixing Civic Wayfinders were his keys to victory.

"I really like Colossus—I don't see why not to play it," said Gindy when asked about the differences between his and Shuhei Nakamura's lists. "It's pretty insane, and four Civic Wayfinders make sure Profane Command and Colossus are always online."

In the days leading up to Pro Tour–Hollywood the Faerie menace was very much on every player's mind—not only how the play with or against Faeries but how to cope with the decks that people would be expecting to play against Faeries. The monored deck that Evan Erwin piloted to a third place finish at the Star City Games event two weeks prior was rising in popularity and of course there were going to be plenty of wildcards.

"I made sure I knew the matchup and packed five cards for the match," said Gindy of his preparation for the Faerie deck. He felt confidant playing against Mountains but Vivid lands ended up giving him fits. "I think Monored is the best matchup but the worst was Quick 'n Toast."

With a 5-0 game record against Jan Ruess you could make a case that his best matchup was against Merfolk. Not only did Gindy have to get past Ruess in the finals, he had a key matchup against the German in Round 15 that the American needed to win in order to remain in Top 8 contention.

There was a pretty key moment in Game 2 of that Swiss match where Gindy had played Llanowar Elves and a small Tarmogoyf into Ruess's Stonybrook Banneret and Mutavault.

"I cast Slaughter Pact on his land and blocked with 'Goyf and he couldn't catch up," recalled Gindy when asked about any big plays that came down the stretch.

With over a decade of Magic behind him and needing that crucial Round 15 win in order to draw into the Top 8, I wondered what was going through Gindy's mind as his tournament fate came down to this critical match—and how he was feeling after emerging with the win.

"I was just counting down the rounds one at a time," said Gindy. "I was just happy to get to play in a PT Top 8."

With his Top 8 berth secured it was time to get ready for his first trip to the Sunday stage at this level of play. Fortunately for Gindy, he had a strong supporting cast to help him prepare for his quarterfinal match with Nico Bohny and beyond.

"I built the Doran deck and me my friends Cory, Marshell, Bo and Chris helped me come up with sideboard plans and play some games," he said. "Then I went to playing Reveillark and didn't think I could win against it but might be able to get the match with some luck."

If you listened to the webcast, you also know he had some help from forces beyond his control...namely, a fortune cookie from Panda Express on Saturday night that informed him that "You'd make a name for yourself."