ooking back to the end of 2008, one of the most anticipated tournaments at the World Championships in Memphis was the Win Gold tournament which awarded the winner—and only the winner—$10,000 in solid gold. The gold was on display throughout the event waiting for qualified competitors to sort out who would be going home with the bounty via a Sealed Deck tournament with a Top 8 booster draft on Sunday. 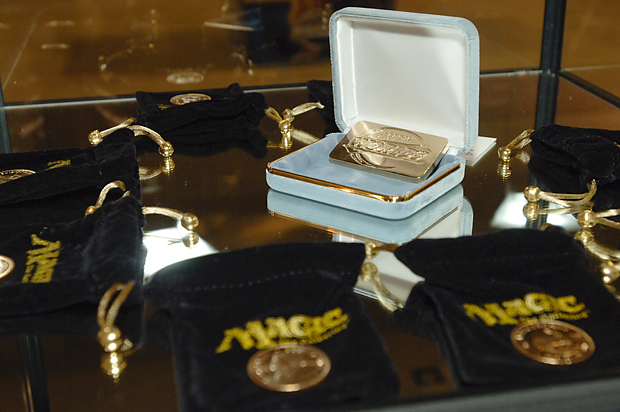 The event was similar to the Win a Car tournament at the 2007 World Championships in New York which served as an introduction to that tournament's winner, Sam Black. Sam built on his success at the end of 2007 with a 2008 campaign that saw him make the U.S. National team and help hoist the Worlds Team Championship trophy alongside Michael Jacob and Paul Cheon, just a few weeks ago.

Could any of the names that got churned to the top of the Win Gold tournament be players to watch in 2009? My suspicion is, yes. Based on the way the top two players in the tournament finished their 2008 season I have them both on my radar for the coming season. Here are the final Top 8 standings from the event:

Seth Manfield's victory is all the more impressive when you consider that he nearly could not play in the event—since he was one win away from making the Top 8 of Worlds the day before, finishing in 13th place! The 18-year-old high school senior from Chevy Chase, Maryland has been considered an up-and-comer here on the East Coast for some time. Previously he had made Day Two of Pro Tour–Geneva, finished well at Grand Prix–New Jersey, and won Grand Prix–Daytona Beach, taking down Pro Tour superstar Paulo Vitor Damo da Rosa in the Finals.

Manfield earned his invite to Worlds—which he has now parlayed into a Kyoto invite based on both rating and his Top 16 finish—off of his rating, but he secured his seat in the Win Gold event at a small hometown tournament playing with small creatures.

"I played in a 14-player tournament at Dream Wizards in Rockville, Maryland," said Manfield. "The qualifier was Standard and I played Kithkin which led me to a Top 4 at States." 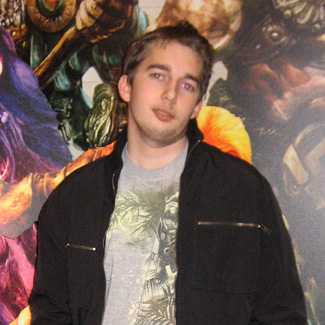 Meanwhile, his opponent in the Win Gold Finals was building up a head of steam coming into the tournament at some big-money events that have sprung up around the country thanks to the efforts of entrepreneurial tournament organizers. Michael Lapine is a 22-year-old self-described rapper / pizza delivery guy / student who hails from Huntington Station, New York. He was already planning on making the trip to Magic's year-end party—despite not being invited to Worlds—before he was even qualified to Win Gold.

"I made it to the Finals of one of the in-store qualifiers at home with my friend Jay Imperiale," said Lapine. "It was Standard with about 15 players. I had already told Jay I was going to take the trip with him to Memphis so it was pretty important that I qualified."

The week before the World Championships, Lapine had finished strong in the StarCityGames $5K Standard Open—following right on the heels of another recent Top 8.

"Shortly before the 5K there was a 3K in Connecticut in which I made Top 8," said Lapine, who has had standing reservations at Northeast PTQ top tables. "I've also made Top 8 in a couple of PTQs and—I know no one counts them, but—top ten in like five more. My best performance though was in Nationals this year where I came in 14th."

Lapine's weapon of choice in Standard was a Rock-like concoction that has continually served him well despite his—and other's—reservations about the deck.

"I played a Black-Green Elf deck that packed only the best Elves: Thoughtseize, Bitterblossom, Kitchen Finks, and Profane Command," Lapine wryly explained of his Philadelphia Standard Open deck. "It actually had like twenty Elves in it but it may as well have been a Rock deck. At Worlds, something like 19 people played decks that were similar with two people going 5-1. As I was told multiple times, the deck doesn't beat anything. I did go 6-1 at an iPhone side event with it, but I wouldn't trust it unless there is a very Faerie-heavy metagame."

Once Sunday of the World Championships weekend rolled around the two players sat down as part of a field of nearly 120 other gold-hopefuls looking to build a Shards of Alara Sealed Deck that could secure them a seat in the Top 8 draft. The two players had very different philosophies regarding bombs in Sealed.

"I just wanted to play as tightly as I could—which I think I did," said Lapine who did not want to count on bombs to be the difference maker for him. "Statically, most pools are going to be average so you have to make yourself the variable that pushes it to the top."

Lapine was coming in with the goal of being tight, but Manfield—fresh off of winning some cash and a Kyoto invite during the main event—was coming in feeling loose.

"After doing so well at Worlds it was kind of a freeroll," explained the Grand Prix–Daytona Beach winner. "I knew that Naya had the most depth and opening bombs was important in Sealed. I went Naya with Flameblast Dragon, Sarkhan Vol, and Titanic Ultimatum."

Despite his good fortune with rares, it was a deckbuilding decision involving a common that had a tremendous impact on Manfield's success in reaching the Top 8.

"I decided to main-deck Naturalize," said Manfield of his inclusion of the green instant which usually starts most matches on the bench. "[It] was key in my last match as I was able to surprise my opponent by Naturalizing his Oblivion Ring which had removed my Flameblast Dragon."

Lapine did not have any similar anecdotes with his Sealed Deck: "I don't remember any cool plays from the Swiss, but I had to make one to win in the Top 4. My opponent was at 5 or so life facing just my Undead Leotau with nothing out but an Obelisk and an Executioner's Capsule. He cast Oblivion Ring, and I responded by giving my zombie kitten +4/-4, which not only made him target his own Obelisk with the O-Ring, but let me unearth and attack for lethal the next turn."

"I've drafted too much in the past month to recall exactly what was in the packs I opened but I do remember being very happy with a first pick Kresh," grinned Lapine about his Top 8 draft.

"I started out with a very weak pack and took Kiss of Amesha," recalled Manfield of his Top 8 draft. "I just tried to be flexible; when I saw a Vithian Stinger I was very happy. I ended up with a very good Grixis draft—which I think is the most underdrafted shard. My deck ended up with two Stingers, Blood Cultist, and Fatestitcher with good removal despite having no bomb rares."

2 Undead Leotau 1 Kiss of the Amesha 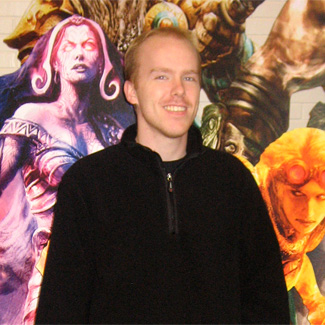 "At the very least, I want to play in a Pro Tour," said Lapine—still a rookie—of his Magic goals for the 2009 season. "Sounds reasonable, right? More ambitiously, I would like to actually win a large event, be it a GP, a 5K, or just a PTQ."

Lapine found himself a few points shy of being qualified for Kyoto thanks to a late round loss in a PTQ so his shot at the Tour will have to go on hold for time being. After getting a taste of the new split format in Chicago this year, Lapine is eager to see how the dual tracks of Constructed and Limited will impact the Pro Tour.

"I really liked the way that Nationals was laid out," Lapine explained of the split format tournament where he finished Top 16 this past year. "Being from New York, I know what it's like to play the same deck for nine rounds in a row and I appreciated the change of pace. I also like that the tournament can't be dominated as much by a single deck. If you can't beat Faeries, at least you can win some rounds in the drafts."

For Manfield, with a little cash and some more success under his belt there was little surprise as to what his goal is for 2009.

"I would like to attend all the Pro Tours and North American GPs if possible," said Manfield. "I'm preparing for GP–LA this weekend."

I know I will be eager to see how Seth Manfield follows up on his Worlds Top 16 and Finals finish in the Win Gold tournament when the 2009 Pro Tour season gets underway in LA this weekend. Who will you be expecting to see in the Top 8 and atop the 2009 Player of the Year leaderboard?