hen you look at the list of players with three of more Grand Prix titles to their name you see a lot of Hall of Fame rings. On that list are some of the today's heartiest road warriors as well as a couple of names from the early days of the Grand Prix. What you don't see a lot of are teenagers. With his win this past weekend at Grand Prix Houston, Shahar Shenhar just added his name to that list, all before his twentieth birthday. 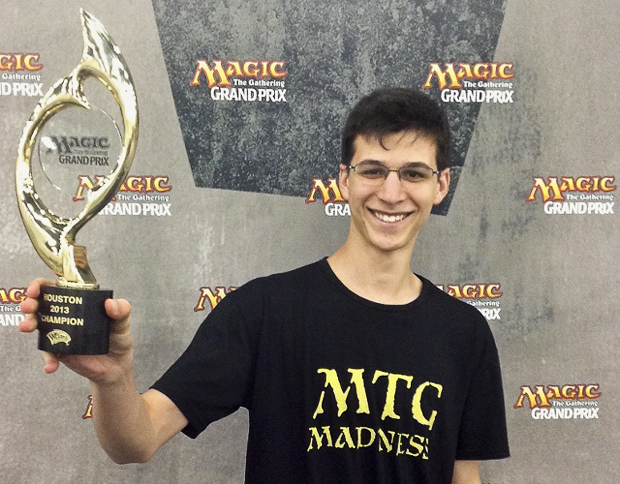 
We first met Shenhar in this column after his debut at Pro Tour Paris during the 2011 season when he got his career off to a more than respectable start with a 38th place finish with a rogue deck of his own design (he also moneyed the Grand Prix which took place that same weekend). Since then he has become a fixture on the Pro Tour and a dominant force on the Grand Prix scene, winning at least one such tournament each season. He capped the 2011 season by winning Grand Prix San Diego, won Grand Prix Salt Lake City a year later and now adds Houston to his trophy case.

While a Sunday finish has eluded him thus far he has proven himself to be a fearsome competitor at the Pro Tour level as well. His Top 16 finish at Pro Tour Gatecrash was a huge part of his Platinum campaign this past season which qualified him not only for a seat in the sixteen-player World Championship taking place in Amsterdam, but also landed him the captaincy of the Israeli National team for the World Magic Cup. It is going to be a busy summer for the young man who joins the following list of players with at least three Grand wins.

It is an impressive group of players that includes seven Hall of Famers and spans nearly two decades of premier level play. Only twenty-four players in the history of the Pro Tour have racked up three wins at the Grand Prix level and with Grand Prix getting larger, and thus more contentious, that he has done so over the past few seasons is all the more impressive.

"First of all I am honored to be in put in that group of players," said Shenhar when I showed him the elite class of Magic players he was in. I was trying to determine what allows a player who is so young to keep his wits about him when playing in so many big matches that have gotten the better of older more experienced players. "Second, it's important to just stay focused at the task at hand, which means play your match and worry about everything else later."

Shenhar grew up playing Magic in the Bay area of California and was no stranger to playing against the likes of Luis Scott-Vargas, David Ochoa, and Josh Utter-Leyton on the local scene; as well as the rising stars from that area like Ricky Sidher, Michael Hetrick, and Jacob Wilson. Shenhar has always sought out the highest level of competition to keep himself challenged—but also to forge friendships that keep the game interesting for him.

"The most important thing I learned on getting better at this game is playing against players that are better than you," said the newest addition to Team ChannelFireball. "It is also important to remember that this game is for fun and the community is great, my competitive self sometimes forgets that, but it's really the best part of this game." 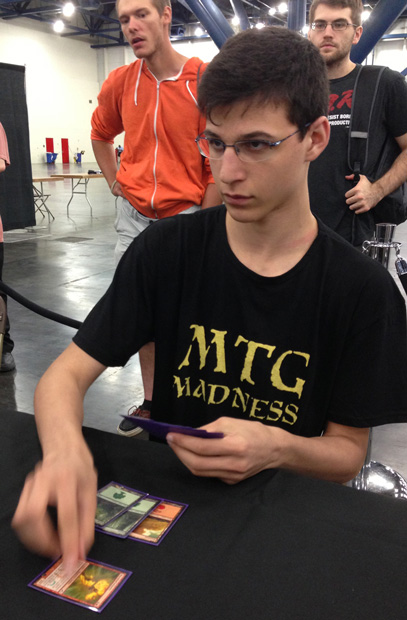 
When you listen to Luis Scott-Vargas talk about the composition of his super team and the regimen of playtesting they made it pretty clear that chemistry is a huge part of the team's success. As such, there has always some turnover on the Team ChannelFireball roster, but Shenhar says he is staying with the team as they head into the coming season.

"Working with CFB was a delight, I was happy with how our team worked together and I liked the deck we ended up with. I am on the team for the next PT and am excited to work with them in the future," said Shenhar who is hoping that he can have the same success with the team as Gerry Thompson did at Pro Tour Dragon's Maze. "I feel like I am good enough to Top 8 a PT, but there is always plenty of room for improvement regardless of how good you are."

"I am planning to test for the World Championship with other (ChannelFireball) WC competitors, nothing else is figured out other than that for that tournament," he explained."For the WMC its going to be harder for me to test due to scheduling of both tournaments, but I am very confident in our team and feel like we have a great shot to get that trophy. I think it's a great honor to play and represent Israel; it's too bad that I am so swamped with WC during that week to get the full experience of testing with the team though. I will do my best to communicate with them online."

I would be remiss in missing an opportunity to ask the three time champion about his take on drafting the full block Return to Ravnica format. Something he did three times en route to earning that third title.

"In this draft format it is very easy to train wreck, which is why it's so important to follow the signals and abandon your first few picks once you know what's open for you," explained the 19-year old. "It's also important to note that the two color decks will have 4-7 filler cards and that's ok, because you are two colors and other decks in the pod are 2-5 colors."

I followed up on the notion of filler cards by going back to his quarterfinal match against Shuhei Nakamura (who, by the way, moved into sole possession of second place for all-time number of Grand Prix Top 8 finishes with his 22nd such finish) when he shut down the Japanese player's Snare Squad with the unlikely Rubbleback Rhino.

"Rhino is a not a great card on paper, but it's quite good with enchant creatures, and ramp spells," explained the Israeli National Champion. "In my deck it was quite good because I had four ways to cast it on turn 4. It's not a card you build around ever, but it's a playable I am not unhappy with and it's the perfect filler card."

You will get a chance to see Shenhar in action again this weekend at the colossal Grand Prix Las Vegas. I will be there as well with a rare opportunity to play in an event. Sure enough, I pick the one with 4500 players in it! I am sure I will see most of you there but if not I will be tweeting throughout the event from @Top8Games and of course you can watch the live video coverage on Twitch.tv/magic.