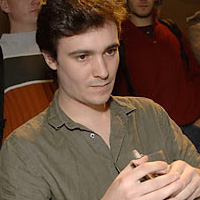 still vividly remember being in the coverage cave at Pro Tour–Columbus and having Randy Beuhler come running back to let us know that there was an undefeated Affinity deck most of the way through Day One. Given the archetype's track record of dominance that may not seem all that startling but by all accounts the deck had been "hated" out of the format. Only eight players even dared to bring the archetype to that event. One of those eight players was Pierre Canali, who would go on to win the tournament—and whose unusual take on the deck had sent Randy careening across the Greater Columbus Convention Center to alert the coverage team.

Everyone came into that event expecting that the threat of Energy Flux would be enough to keep the deck from dominating Extended as it had the Block and Standard formats before it. One of the unique characteristics of the Affinity deck has always been the single-mindedness with which it plays either artifacts or cards that benefit from having artifacts in play—and sometimes both. What it almost never did was play colored cards that had no synergy with the rest of the deck. When I interviewed Pierre about what made his deck unique he credited two then-unknown players for helping him work on the deck. Of one signature main deck inclusion he had the following to say: 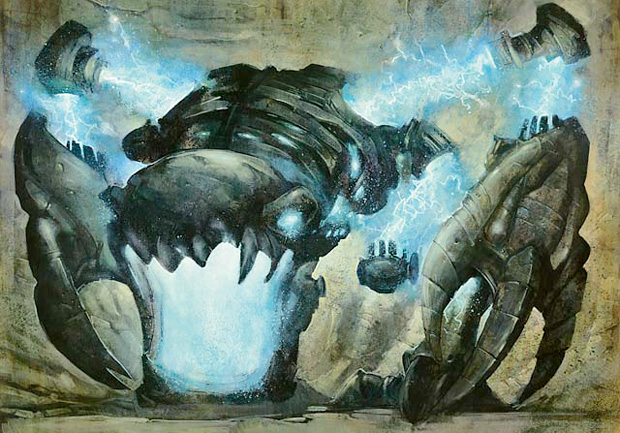 "Guillaume Matignon thought about adding Meddling Mage to the deck, some other Frenchmen and I worked on it."

Among the "other Frenchmen" he referred to was Guillaume Wafo-Tapa, who despite working on the deck opted to play something else at the time—not surprisingly, a controllish deck. 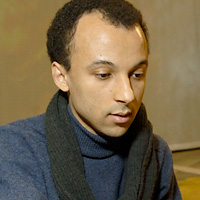 It was the first time I had heard of all three friends and it would most assuredly not be the last. With Guillaume Matignon's stunning victory in Chiba each of them is now the owner of a Pro Tour Trophy. While Wafo-Tapa went back to the Pro Tour Qualifier circuit for the remainder of the season after Columbus he pulled his game together by the end of 2005 with a Top 16 at Grand Prix–Bilbao that propelled him to a Top 16 finish at Pro Tour–Honolulu and he remained on the Pro Tour for the next couple of years including his Mystical Teachings-fueled win at Pro Tour–Yokohama.

"I remember seeing Mystical Teachings and Teferi, Mage of Zhalfir," Wafo-Tapa said of his first look at Time Spiral block and the instant and legend that would become his calling cards. "I couldn't believe they made a card as good as Teferi, Mage of Zhalfir. This is such a perfect card for the control player—and Mystical Teachings along with it? I remember thinking, 'Well I probably know what I'm gonna be playing in Standard for the next two years now'."

It took a little longer for Matignon to get his big finish. Despite being a formidable player and being in a circle of French players that included multiple Hall of Famers and Pro Tour winners, Matignon did not play on Sunday on the Pro Tour until this season when he broke through in San Juan—although he still does not have a Grand Prix Top 8. He went on to win Worlds at the end of the 2010 season and coupled with his spot on the French National team—due, in no small part, to his friend Guillaume Wafo-Tapa—he managed to secure a historic tie for the Player of the Year title. A tie that will be settled with a tiebreaker match at Magic Weekend in Paris, in just a few weeks.

Despite his newfound success Matignon has likely been playing the game longer than most of you reading at home. 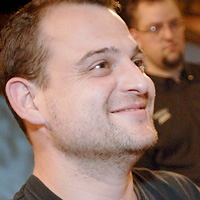 "I started playing Magic in 1994," said Matignon. "We bought two boxes of Unlimited with four friends and played with those cards for one year or so. Five friends, five colors; that was easy, we got one each and I got blue. Well, we didn't even know the real rules at the time and played five-player games. When I got to high school in 1995, all my friends stopped playing and gave me their cards. My high school was in the center of Bordeaux, not far from a local shop. And in that shop, a judge was organizing tournaments on a weekly basis—Cyril Grillon. Thus I got the 34th DCI number issued in France—playing the very first sanctioned tournament in the country. From there I quit the game many times and always came back some months later."

It was more than a dozen years later before Matignon began to play the game seriously despite having already qualified for multiple Pro Tours along the way and even finished 33rd at his first Pro Tour—2004 PT–Yokohama.

"I've been drafting with local players since Mirage block. But even if I've been playing tournaments since then it was not "competitive", explained Matignon of his ascension to the Pro Tour ranks. "The turning point for me was in 2006. I Top 8ed my Nats that year and decided to play as many Pro Tours as possible."

Of his friendship with the other two Pro Tour winners Matignon explained that he did not actually know Canali until after the win at Pro Tour–Columbus. He has already met Wafo-Tapa a few years previous to that.

"I played against him in 2002 in the EU Champ's in Amsterdam," said Matignon of meeting Wafo-Tapa. "Later, the same year I moved to Nantes, his city, to study for three years. In Nantes he was kinda the best player when I arrived. So the first thing between us was some kind of rivalry, I guess—at least from my point of view. That became friendship with time."

After years of friendship Matignon was able to reveal the secret to Wafo-Tapa's success:

"He plays Magic a lot. And when I say a lot, I really mean it," Matignon emphasized. "About 8 hours a day every single day of the week. Without taking a day off. Ever. And he loves the game a lot too. Being a hard worker is enough to win I guess."

"I didn't know Pierre much by then," he said of his role in putting Meddling Mage in Canali's tournament-winning Affinity deck. "I gave the deck I had to Wafo for him to play it if he needed. He ended up giving that one to Pierre. At least that proved that an idea I had while drinking a beer was able to win a PT—the Meddling Mages in Affinity. I was also drinking beer when I got the idea of Dralnu, Lich Lord for Wafo's blue-black deck for Worlds 2006. Maybe I should drink more often ... I got to know Pierre in the following years and we became friends—thanks to that little deck I guess."

I asked Matignon if there was something different about how he approached the game during this breakout season as opposed to in years past.

"I don't think I'm better than previous years technically," he shrugged before admitting that he took a page out of Wafo-Tapa's playbook. "I took more time to prepare this year, three whole weeks for San Juan and the same for Worlds, that helped a lot. And I got used to playing on the PT. I did some little things this year that I didn't do before, like always having sleeping pills to fight the jetlag. That's experience I guess. And I got really lucky too, in games and in deck choices."

After playing for so many years and working so hard throughout the season one would imagine that playing in the Finals of the World Championships, with a share of the Player of the Year title on the line, and under the scrutiny of the cameras, that it would be one of the most harrowing experiences of his Magic career. Quite the opposite, explained Matignon.

"That was strange. Basically the tournament was over after the semis for me," recalled Matignon. "We had the Worlds won. I didn't realize—even now—that I played a Worlds Final. That didn't feel like a Final for me to play against him. That was just some Magic games between us, like we played thousands of times. The cameras were there but it didn't matter."

I asked Matignon about how the friendship between him, Canali, and Wafo-Tapa affected their Magic careers. Specifically, I asked him if he thought the three of them would still have trophies on their mantels without the others.

"Wafo won his all alone. He played his brew, tested it alone and won only by himself. He doesn't owe anybody for his trophy," Matignon said emphatically. "For Pierre and me, that's different. We owe a lot to the other two guys and we wouldn't have won a PT without Wafo—ever." 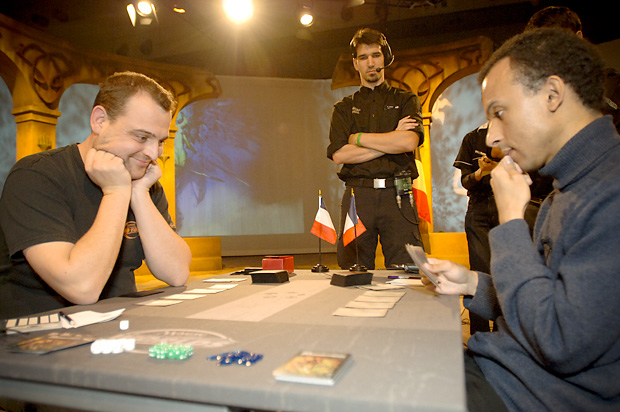 You can be sure that Wafo-Tapa will be helping Matignon prepare to win yet another trophy—the Player of the Year title remains to be settled in Paris—more details on this will be coming very soon. Matignon would love to have the title but he has little use for the physical trophies—in addition to his Worlds trophy he has won a Championship playing another card game as well.

"I don't even keep them," said the potential Player of the Year of his hardware. "I give them to the local shop I play in—Armes de Légendes in Bègles, France."