orry about your preview card, man," said one of my fellow columnists as we wrapped a phone conversation the other day.

You see, we all receive a communal email which outlines all the cards that are being previewed and who gets which ones. I was just happy to have a preview card this time out. My previews have been few and far between since I handed over the Prerelease Primer reins. Even then, I was generally getting a common to discuss in the context of playing in the opening weekend tournament. My preview for Alara Reborn most definitely falls into that camp and is clearly not as "exciting" as game-enders like Nemesis of Reason, Bituminous Blast, or Jenara, Asura of War.

I could understand the perceived disappointment. After all, everyone looks forward to preview week for dramatic new cards that change the way we play the game. Just look at the cascade mechanic that is featured on Bituminous Blast or the gaudy stats and abilities tacked onto Jenara, Asura of War for only three mana. 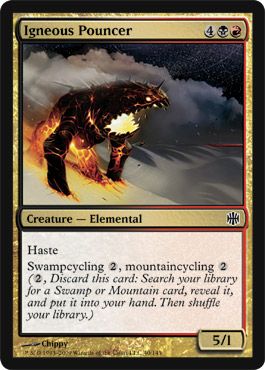 Igneous Pouncer may not be as flashy as any of the cards mentioned above—or many of the cards sporting the silver, gold, and red-orange signifiers of higher rarities—but I would wager that it, and the other cards in the cycle such as the already spoiled Pale Recluse, will each win—or have played a crucial role in winning—more games during Prerelease weekend than any of the other cards spoiled to this point. Even when a Nemesis of Reason or Jenara, Asura of War gets into the red zone to strike the killing—or milling in the case of the Nemesis—blow, you can reasonably certain that they will have gotten there thanks to heavy lifting from the likes of Pale Recluse or Igneous Pouncer, who we are getting our first look at here.

With the introduction of Alara Reborn into the Limited environment there will be one fewer pack of Shards of Alara to kick around meaning fewer tri-lands, Panoramas, and Obelisks—not to mention Jungle Weavers, Yoked Plowbeasts, and the like. Plus, take a look at the cards that have been spoiled so far ... there are no easy-to-play cards to be found. There is no Knight of the Skyward Eye or Cylian Elf awaiting you in Bant, not a Viscera Dragger or Kathari Screecher to be unearthed in Jund or Grixis, and certainly nothing that resembles a Mosstodon in Naya. It is nothing but gold cards from turn two forward in that third pack—putting mana fixing at even more of a premium than it had been in the first two packs.

You will often hear people looking at a Draft or Sealed Deck pool and half-joking that the deck is "too good" and "guaranteed to go 0-3." How many times have you looked at a deck full of bombs and tried to reconcile its poor showing? Just look at Steve Sadin's column from earlier this week where he presents a draft pool that one forum poster claimed "built itself." But the pilot of that draft pool is a Hall of Fame–eligible player who regularly drafts online and could not get past the first round of an 8-4 draft with that deck; due in no small part to very challenging mana requirements and a dearth of fixing to meet those challenges.

I love cards like Igneous Pouncer. You see, players first-pick tri-lands and basic land cyclers all the time and I would be shocked if these did not go first at an even greater frequency. How many times have you simply played a Jungle Weaver or Yoked Plowbeast with little intention—or sometimes even capability—of getting it into play? You just wanted something to do with your mana on turn two and were, more often than not, hoping to draw into land number three.

Igneous Pouncer guarantees that you will have that third land and—unlike the basic landcyclers from Conflux, which required you to have a specific color of mana to use them—can be used to splash the very colors in its casting cost. Absorb Vis and Fiery Fall are fine cards but do very little in the way of helping you if you need to find a Mountain or Swamp at just the right moment. The land cyclers from Conflux were ideal to find the third color—or fourth or fifth—in a deck that largely featured the color of the cycler itself. Igneous Pouncer is something you want to have in your Bant deck to support that lone Swamp you stuck in there for a Bone Splinters or for your Esper deck to have a way to find a Mountain to actually cast Fiery Fall.

More importantly than just fixing your mana they also provide a flexible alternative to playing extra lands that can clog up your hand in the late game. This is great early when you want to assure yourself a third land for your Sprouting Thrinax, and in the late game it becomes an unexpected participant in the damage race as a 5/1 hasty attacker. Yes, mana-fixers can finish games too ... I can see this happening quite often in drafts as two players have been trading haymakers back and forth. Their hands have been emptied in a flurry of threats and answers. Panting across the red zone from each other the players lay land after land off the top of their deck until the black-red player taps six mana to put an unexpected end to the proceedings.

Or for the Pale Recluse player .... How often have you languished on mana, desperately hoping to draw the critical seventh mana to play Jungle Weaver against an Esper air force? Now, with what is sure to be Spider fan Jon Becker's favorite card of all time, you can trade off a little power and toughness to get this bad boy into play a turn earlier. 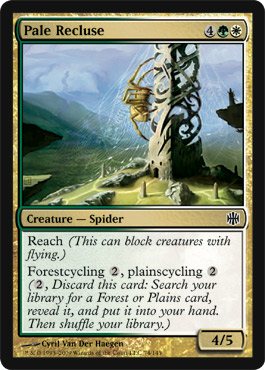 One interesting point about this group of cards. It is important to note that the Swampcycling and Moutaincycling are two separate abilities. You cannot pay two mana pick up your deck and decide which one you want to get after perusing your deck. You need to choose—and announce—what basic land you are searching for as you are cycling the card. You also cannot get both lands. They would have let Mike preview this one if that was the case because it would be going straight into the Top Decks in Hawaii.

When you head to the Prerelease, don't just dismiss this cycle like my fellow columnist did. These are the cards that are going to be doing the heavy lifting for you, and the least they deserve is a pat on the back and a preview feature on the mother ship.

Speaking of low-profile cards that may do some heavy lifting, there's a card up today in the Visual Spoiler that was previewed at the GAMA trade show earlier this week. Rumored versions of it have been kicking around the Magic Internet for a couple of days, to generally positive response—but as it turns out, those versions have been missing a few details ... the color of the expansion symbol, for one, along with a little keyword called exalted .... 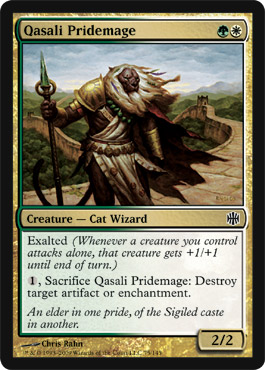 It is obvious to me that Igneous Pouncer and its ilk will have a huge impact on the Limited format. What about Constructed? Twisted Abomination and Eternal Dragon have both seen Standard play. Head to the forums and give your assessment of the Pouncer in Standard.