Nationals provided several big storylines this past weekend in Baltimore. There was the emergence of Monoblue Tron as a dominant deck, the dissolution of the traditional team TOGIT and the roster changes that have led to the crowning of the Seven Kings and the excitement over the high quality of this year's U.S. National team.

All three storylines were at least partially written by the same author – U.S. National Champion Antonino De Rosa. De Rosa reeled off an 8-0-2 record in Constructed with Monoblue Tron. He was one of three "Kings" in the Top 8 and is captaining a team that includes himself, TOGIT's Jon Sonne, and Neil Reeves.

The Italian-born 23-year-old was still pinching himself when I caught up with him to ask about winning the National Championship for his adopted country.

“I still can't believe it!” De Rosa beamed. “I am very proud and overwhelmed at the idea that I have to represent United States of America at Worlds. Having Neil and John on the team makes it much easier since they are both better than me at Magic and both great friends.”

This was the second win of De Rosa's career. He won Grand Prix-Kansas City during Mirrodin Block Limited but, despite countless money finishes, has never come close to winning as much as the $25,000 he picked up for his finish in Maryland. This was his third time playing in Nationals in the United States and has come close to playing on Sunday the other two times.

For a long time, De Rosa explained that he seemed to have a mental barrier keeping him from that breakout performance. There were plenty of times on the Pro Tour where he was within shooting distance of a Top 8 spot only to stumble and have to settle for a Top 64 payout. He credits his victory in Kansas City with giving him the confidence necessary to win on the bigger stage – and as a result would be hard-pressed to pick one victory as more meaningful than the other.

“Well, in Kansas City winning was really awesome because I actually believed in myself that I could win. Before Kansas City I made four GP Top 8s and lost every time in the quarters. I think I have more PT Top 64s ending on a losing streak than anyone on tour. Too many times I am like one win away from top eight and would lose three or four in the row. I usually crack under pressure. Winning Nationals is a much bigger accomplishment than winning a GP but they are both very special to me.”

Last year, De Rosa played in Italian Nationals without much success. It did earn him a fair amount of ribbing from his friends back home when he won this year's U.S. event, though. He was also the source of an unusual form of National pride.

“They all joked around that U.S. Nats must be easier than Italian Nats since I always scrub out of Italian Nats. But everyone is very happy for me, and I don't think I could be any happier that all these people believed in me.”

The next step for De Rosa is replicating his Nationals success on the Pro Tour. Flanked by Reeves and Sonne, he certainly felt good about the team competition at Worlds – although he did have some concerns.

“I think the team is awesome, I really hope Neil goes. (I know he says he will but I still wonder.) Jon Sonne is one of the better American players right now. Neil is just one of the smartest players to ever have played Magic. I think if we playtest together, and fix our kinks for the Team Rochester part I think we can easily be one of the teams competing for Sunday. I am just glad to be the worst on the team.”

To prepare for the event, De Rosa plans to join Sonne in New Jersey and stay at Gerard Fabiano's house. (“Hopefully Neil accepts our invitation. If so we can get a lot of work done,” De Rosa said.) I asked De Rosa to explain the shift from TOGIT superteam to the slimmed down and apparently limited roster of the 7 Kings – a roster that does not include long-time TOGIT staple Sonne.

“Well TOGIT the store is pretty much dead. No one goes there any longer to play. Eugene (Harvey) and Adam (Horvath) are really busy with other stuff like being lost in the World of Warcraft, Patrick Sullivan moved to San Diego, and Jon Sonne and Craig Krempels usually playtest with more Southern Jersey people. We are all still good friends -- I would do anything for any of them. Lately Josh (Ravitz), John (Fiorillo), Gerard (Fabiano) and Osyp (Lebedowicz) test and me, Alex (Lieberman), and Billy (Postlethwait) test. We share info back and forth.”

Of those seven, Antonino, Josh, and Alex all made their way to Sunday this past weekend. “Right now we are very dedicated since all of us are out of school for summer vacation. I mean overall we put three Kings in the Top 8, and we won two tournaments back to back.”

The other tournament win for the team was a couple of weeks back at Grand Prix-Minnesota when Lieberman took home the title. De Rosa was hyping his friend going into Pro Tour-London, and with two high-profile finishes under his belt he seems to be living up to the advance billing.

“A few months ago Alex Lieberman was pretty much the best Magic player that no one knew about," De Rosa said. "He was my PT teammate. He has some of the best raw talent that I ever seen anyone display and I regularly play with people like Osyp and Eugene. Alex takes school very seriously and hasn't gone to too many tournaments before this year. Me and Billy just dragged him out of his dorm room to play with us at the PT. He has been on the gravy train ever since. Osyp claims Alex will win a PT by the end of next year. I will not be surprised if he wins two. I don't want to jinx him but I am very confident of his skills and now that he has a little confidence (something he lacked in the past) there is no saying how much he can accomplish.”

As for the Monoblue Tron deck that he and Lieberman took into the Top 8, what happens to it next week when the base set changes over from Eighth Edition to Ninth? Will it still be a viable deck for Canadian Nationals?

“I haven't thought about it toooo much," De Rosa said. "You do lose Concentrate which is pretty awesome in combination with Chrome Mox, but Plow Under leaves the format which was a very annoying card to play around. Overall I think it stays the same unless Monoblue becomes more popular -- then it's pretty bad. The deck all-in-all doesn't have too much life. As soon as Mirrodin block rotates out and Ravnica rotates in, it is dead.”

There is a long tradition of White Weenie decks winning at U.S. Nationals. When Mike Patnik reached the Top 8 portion of the senior circuit with his White Weenie build, many people expected him – in the role of 'some guy' – to win the whole thing. Patnik had to settle for $5,000, an invite to Worlds, and alternate status on the U.S. National team. With his loss in the semifinals, it fell to 15-year old Jeff Rabovsky to uphold the honor of the oldest archetype in Magic history.

“I either got lucky or played the right deck – or both,” smiled Rabovsky as he prepared to face off against Jason Rosellini and his Tooth deck in the finals of the JSS Championship.

The matchup was something of a coin flip in Jeff's estimation although he had done better than that to this point in the tournament. “The deck is 50-50 against Tooth but it is 60-40 against everything else – except Flores Red which is its worst matchup. I need a fast clock, Damping Matrix, or Hokori. So far I have played Tooth twice and went 2-0.”

His opponent Jason Rosellini had not lost a match after starting the tournament with a disappointing 0-2-1 record in the first three rounds. From that point to the start of the finals, he had reeled off 10 straight wins – including one against White Weenie. He had also faced the deck one other time and lost in the early rounds.

Both players were playing in their last year of Super Series eligibility. In order to see this level of competition again, they will need to elevate their game to the Pro Tour level. Both players have kept their eyes on the Pro Tour and were looking forward to the challenges it would provide. For Jeff he can look to his home state for inspiration as the most visible Pro in his area is former JSSer Gadiel Szleifer. 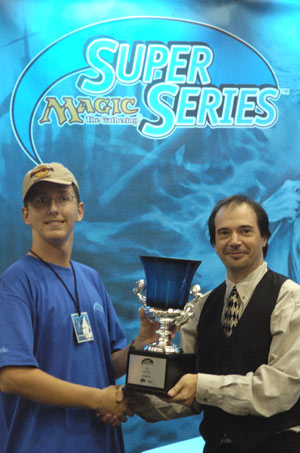 Rabovsky collects his trophy from Richard Garfield.Jason felt confident that he could be competitive on the Constructed PTQ scene and has even played in a couple of PTQs this season to test the waters. Forty-card decks were another matter entirely. “I am not so good at Limited. I just picked up some draft boxes so I am going to start practicing.”

As the two players shuffled for the first game Jason cheered on his all-foil Tooth and Nail deck, “Go shiny Tooth, go!”

He caught a reflection from Jeff's side of the table and he approved, “Whoa…Your stuff looks pretty shiny too. I can see the glare on your face.”

Jeff's deck was actually a rag-tag band of foils, black-bordered, and even white-bordered cards. He had clearly not dedicated the same amount of time to tricking out his deck, while Jason spent nearly as much time trading for the foils he needed as he did playtesting the deck.

“I might have bought a couple of small things here and there – Sakura-Tribe Elders for example – but mostly it was by trading. The decklist always comes first though,” assured Rosellini. “I have like 20 foil cards in my box that didn't make the list. Unfortunately I tested a lot.”

Jeff went on to win the match two games to one despite being out-blinged by Jason. His early threats managed to squeak out just enough damage in two of the three games. In the middle game, an entwined Tooth and Nail resulted in Triskelion and Mephidross Vampire – which continues to be dominating against any creature-based deck.

If the recent successes of Szleifer, Kyle Goodman, and Jeff Garza are any indication, these two young players could be facing each other again on the Pro Tour sometime soon…maybe even with 40-card decks next time.

1 Boseiju, Who Shelters All
74 Cards

3 Mindslaver 1 Boseiju, Who Shelters All
75 Cards

4 Plow Under 4 Beacon of Creation

4 Plow Under 2 Arashi, the Sky Asunder

You'll have to wait a week before reading Zvi Mowshowitz's personal account of playing in the Legacy Championships at Gen Con, and another week for his feature article on the Legacy format.

Until then, you will have to sate yourself with the Top 8 decklists from a 54-person Grand Prix Trial during U.S. Nationals weekend.

In addition to the High Tide decks, White Weenie decks, Survival deck, Vial Goblins, and various burn decks that made the Top 8 there was also quite a lot of MiracleGro and SuperGro along with many other favorite decks from bygone formats.

4 Force of Will 1 Evacuation
57 Cards

2 Sword of Fire and Ice