We are only a few hours away from the first round of Pro Tour–Hollywood as I sit backstage typing this up. The first round of the Last Chance Qualifier is about to start and just shy of 360 players are signed up, hoping to take one of the final four invites to the main event. They will be playing 10 rounds of Standard to sort out who ends up with the precious blue envelopes. It is conceivable that the LCQ will come to a conclusion with barely enough time for the winners to splash some cold water on their faces before heading across the venue for round one of the main event.

If this event were in Europe or Japan, we would normally use this space to bring you a preview of the format with some decklists from the LCQ but that is going to be impossible. Instead, I will be providing a behind-the-scenes peek as the good people at Wizards worked all day long to transform the event space at the Hyatt Century Plaza into a suitable arena to determine the second Pro Tour winner of the 2008 season.

I got into Los Angeles last night and went to see the Dodgers beat the Cincinnati Reds. The game was closed out by the Japanese closer Takahashi Saito—foreshadowing for this weekend perhaps? 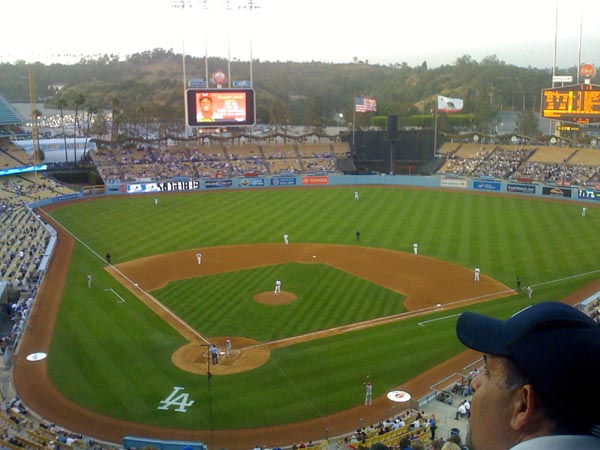 After we returned everyone settled into the beautiful lounge in the hotel and did what Magic players are wont to do. I drafted with former CMU/current R&D members Aaron Forsythe and Erik Lauer. 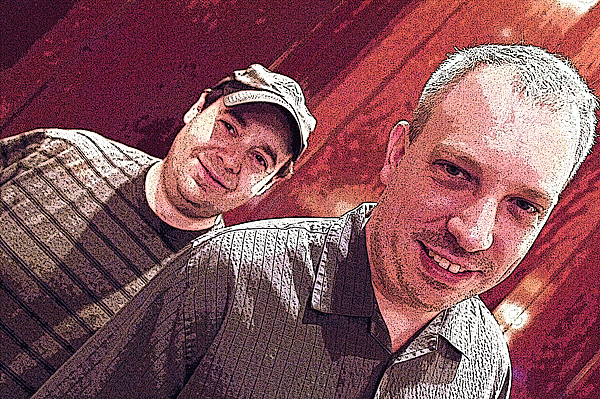 While there were plenty of Pros already on site, most were hidden away in their rooms keeping their tech under lock and key. This left plenty of prime gaming space for judges to engage in a little Elder Dragon Highlander. For all you EDH aficionados in the LA area, rumor has it that there will be abundant EDH action every evening this weekend. 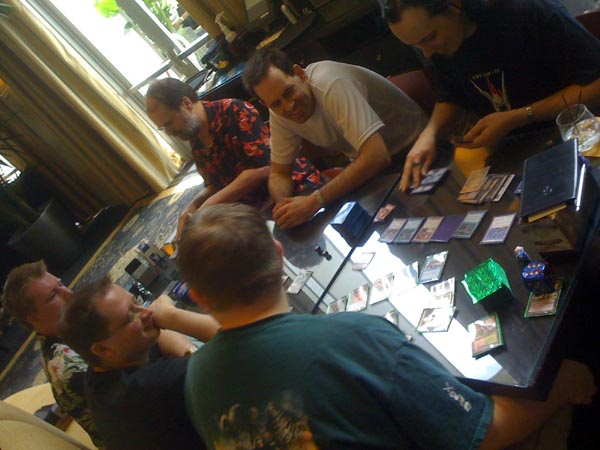 In the morning it was time for everyone to get to work and get the tournament site set up. I have to say that in all my years of event coverage this hotel is second only to the staff hotel we stayed at for Pro Tour–Nagoya 2005. Once you factor in that this hotel is doubling as the venue—in Nagoya we were a half-hour away by train—this has to be the best overall tournament set-up I have been to.

I talked to local resident Eugene Levin at one point and he could only shake his head as this was the nicest hotel he ever had a chance to stay in for an event. The only problem? This is his hometown. Of course with all the Magic players staying with him, he might want to consider taking a room for a little peace and quiet. 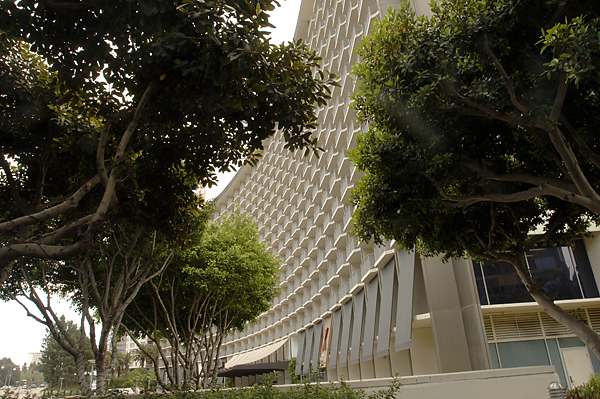 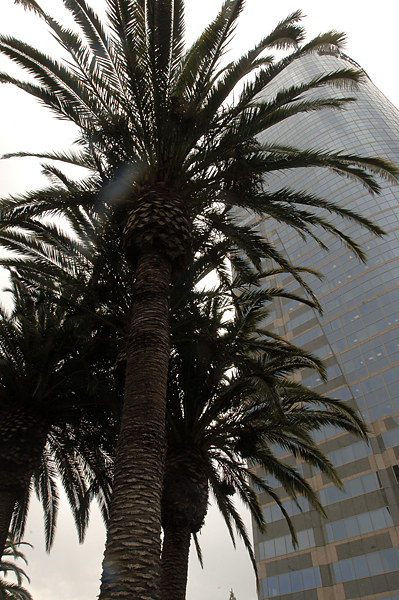 There was a staff meeting in the morning and the Wizards personnel gathered to hear show manager Witney Williams lay down the law. 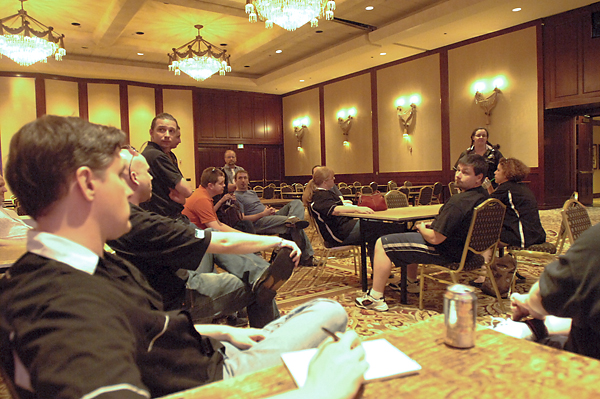 High-level judges went over their assignments in the main ballroom that will be the site of this weekend's main event. 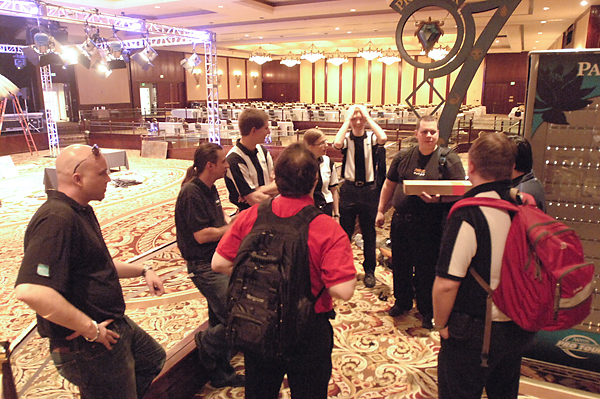 Across the hall, Steve Port began to assemble the Public Events area which will be the site of all the tournaments open to the public; everything from the Last Chance Qualifier to Berlin Block Constructed PTQs to eight-person side drafts. 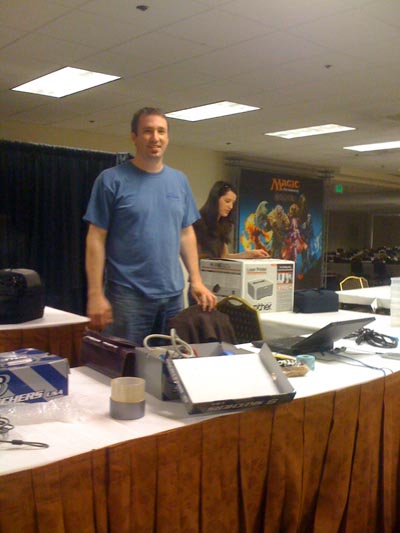 There folders contained blank decklists when this picture was taken, but over the weekend they will be packed with Standard and Block Constructed tech as the results from the Public Events flow in. Make sure you check the Tournament Center all weekend long for Constructed tech from those events as well as the Pro Tour itself. 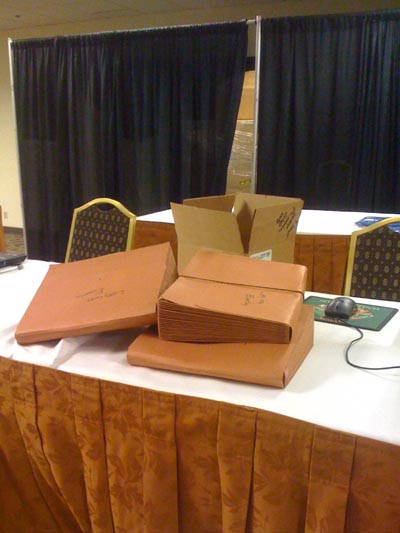 These tables were similarly empty but that would soon change as players were queuing up at the top of the escalators for the LCQ. 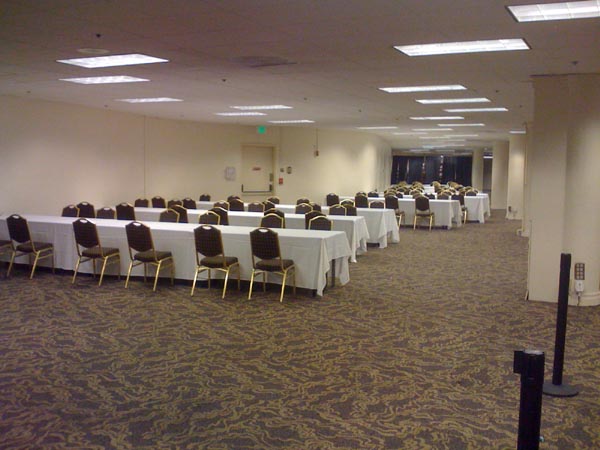 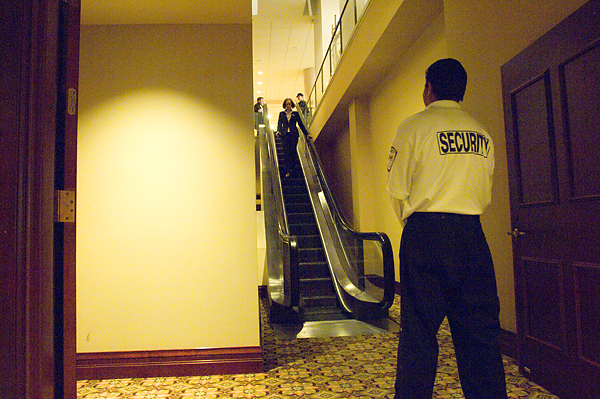 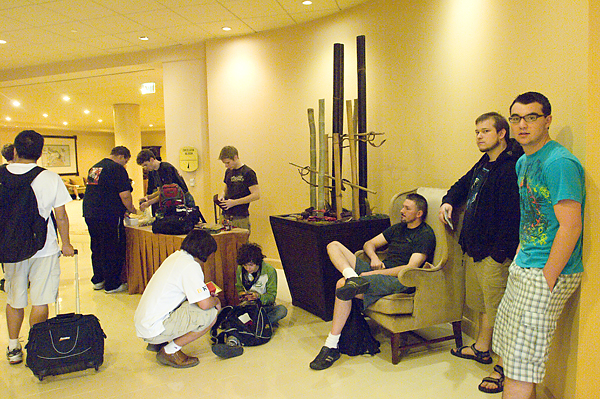 When the doors finally opened and the crowds settled in after registering for the LCQ, the hall looked much different. 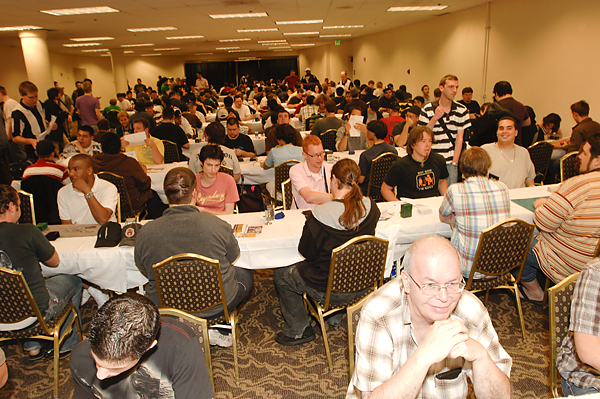 Super Friday Night Magic is just what it sounds like; a gigantic tournament supported by all the stores that would normally run FNM when the circus is not in town. 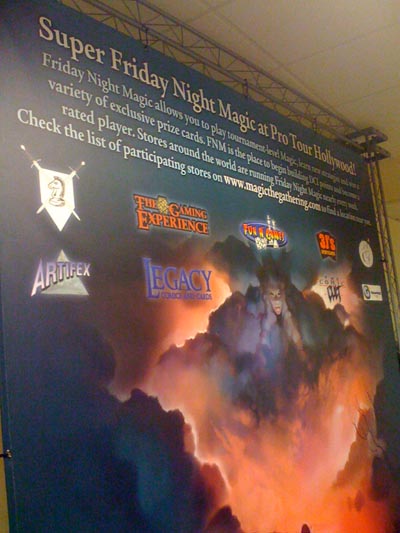 The Gleemax brain was among the first items to be set up. Polish up your resumes, folks. The brain is looking to acquire more computing power. Seriously. Wizards is setting up a job recruiting booth this weekend. 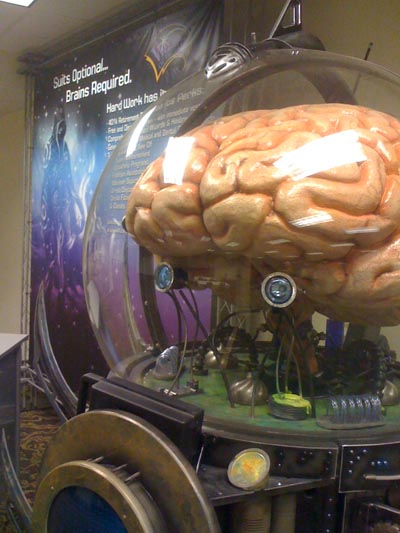 I am looking forward to getting in front of the camera with Randy again—and hoping for a repeat performance from Finkel to make up for the one we missed last time out. We even have a snazzy new Tournament Center logo for this weekend. 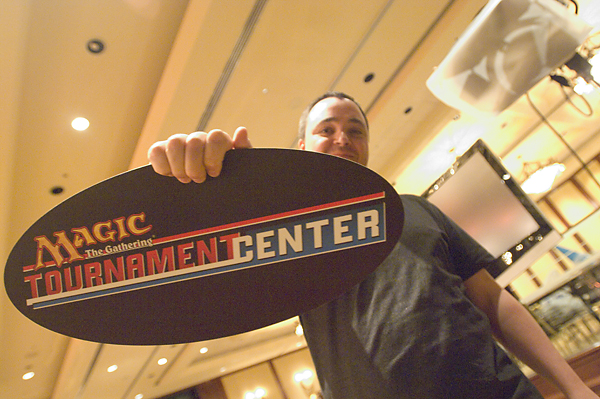 Our webcast director Bruce Towne is getting into character with some of the Hollywood-themed set dressing for the event. 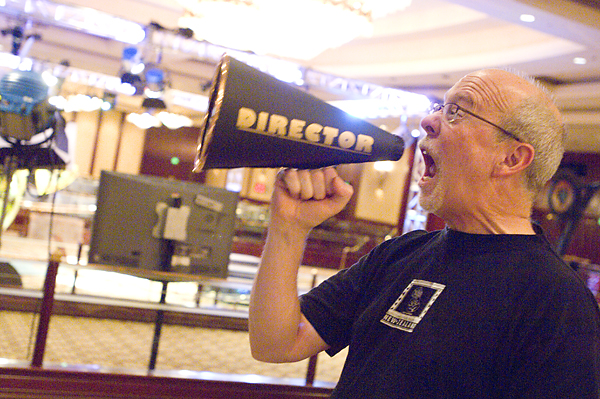 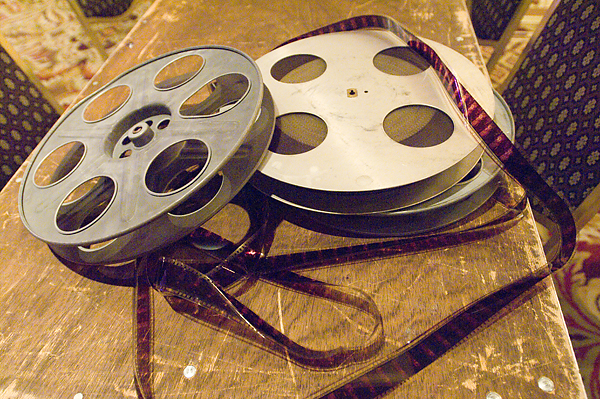 Of course there is plenty of Magic-themed set dressing as well, as evidenced by these larger-than-life Planeswalkers. I have seen Garruk in a sleeve before, but never anything quite like this. 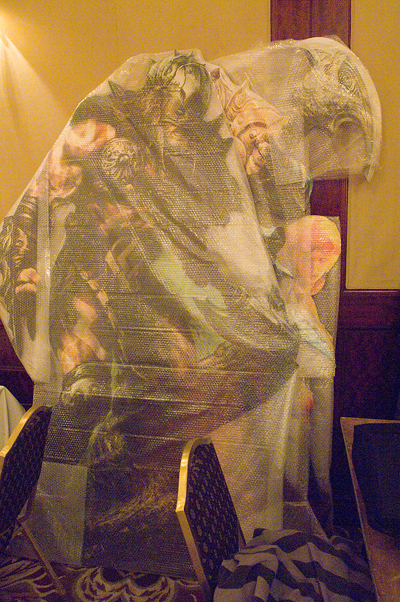 Players starting arriving throughout the day, including Kyle Sanchez who hoped he had the exact 75 cards it would take to navigate the 10-round LCQ... 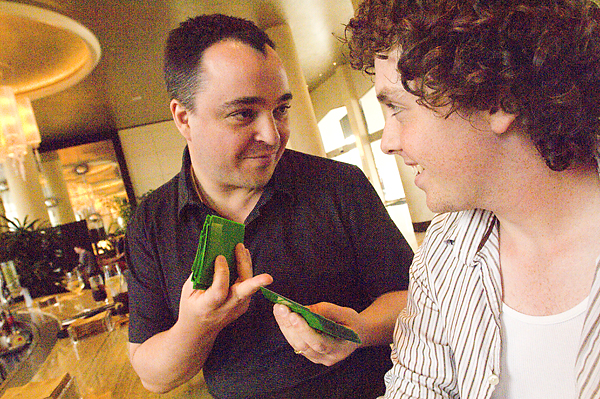 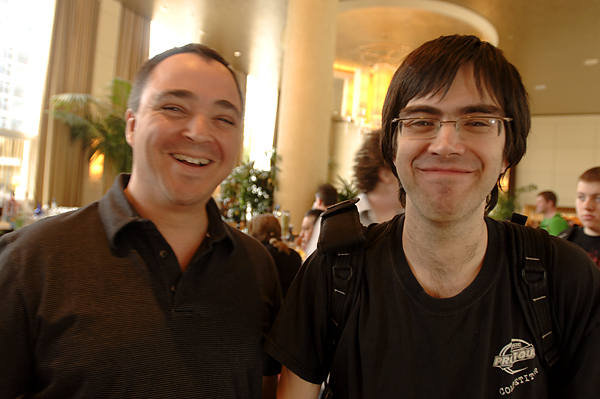 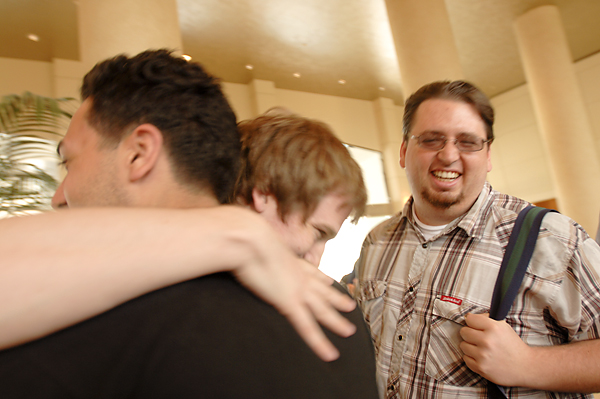 This was the last calm moment that Serra Angel would watch over. By this time on Friday, the Feature Match area would be packed with the game's biggest stars while the game's biggest fans watch on from the sidelines. Don't forget to tune in all weekend long as we determine the winner of the Pro Tour–Hollywood on the second stop of the 2008 Pro Tour season. 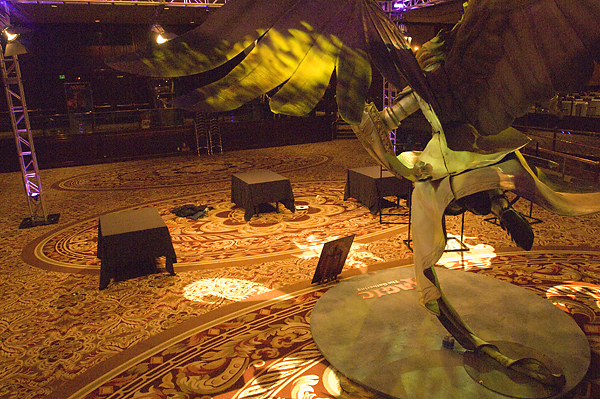 Firestarter: Who Will Win?

I'll keep it easy this time...who do you think will win Pro Tour–Hollywood? Oh, and don't forget to tune in at 1:45 p.m. ET on Sunday for the full Top 8 webcast. The last Standard Pro Tour gave us Craig Jones's topdeck of the century—what's in store for Hollywood?