egionals results have been pouring into the Tournament Center, and new sets of Top 8 decks continue to be added to what is easily one of the most trafficked pages of the year on this site. Looking through the successful lists there were Windbrisk Heights aplenty—it was among the most played cards of all Top 8 lists—but there were also plenty of surprises.

In yesterday's Top Decks, Mike spoke with Phil Napoli about his rolled back version of Green-White Tokens and Gabe Carlton-Barnes regarding his update on Turbo-Fog—two very popular archetypes on the weekend. Seismic Swans was not one of the most played decks, though it did earn multiple Top 8 berths around the country including a handful of Nationals invites, but there was one version in particular that seems to be dominating the post-Regional dialogue.

Immediately after Regionals Aaron Forsythe posted a note that asked if anyone saw anything exciting, and Brian Kowal responded with a tantalizing mention of a 42-land deck that qualified for Nats at his local event. Various players' Facebook statuses and Twitter feeds were suddenly preoccupied with the cascade mechanic for the next few days. Once Parth Modi's Nationals qualifying, 42-land, Cascade Swans deck list—dubbed The Ugly Duckling—was posted, there was a clear, hot deck list in the wake of Regionals weekend.

This is the first deck I have seen since Alara Reborn has been added to the Standard mix that seems to be uniquely forged by the addition of those cards. I caught up with the deck's pilot to find out more about its origins. Parth Modi is a 23-year-old medical student from Chicago, Illinois who will be making the leap from FNM player to Nationals competitor. Remarkably, he has only been playing Magic for about one year despite knowing of the game since elementary school.

Last year while looking for some respite from studying for a major exam, Parth's friend suggested they pick up some starter decks of Magic.

"I started drafting at a nearby store soon after that," said Parth of his path to becoming a Nationals competitor. "After a few months of playing Limited, I tried my hand at Constructed; a few FNMs, then States in 2008—my first Standard non-FNM tournament—where I finished 5-3. Since then I've played in almost every FNM at my store, every draft there, and a bunch of Standard and Limited on Magic Online."

Parth was excited about the buzz surrounding the deck and wanted to make sure that the credit for the deck's design went where credit was due.

"I got the deck list from a friend/playgroup member two nights before Regionals," he explained. "He got it from a friend of his, Chris Davis, who's the designer of the original deck. My own changes were only minor tweaks to the sideboard. The main deck itself is very efficient and powers out the combo very quickly and consistently."

Rashad Miller has played the deck to two PE Top 8s on Magic Online and it seems certain that for the upcoming Grand Prix in Barcelona and Tacoma this deck will now be one of the major players.

"I think it's great that the deck is gaining popularity. It's a fun deck to play and obviously very powerful," said Parth of the deck's notoriety from his performance. "Everyone knows this Standard format has much left to be explored and I think this is just a start. My team—20,000 Leagues Under the Pro Tour—is also very excited about the deck being in the spotlight. It's thanks to the deck's designer and the help of my team that I was able to do well with this deck." 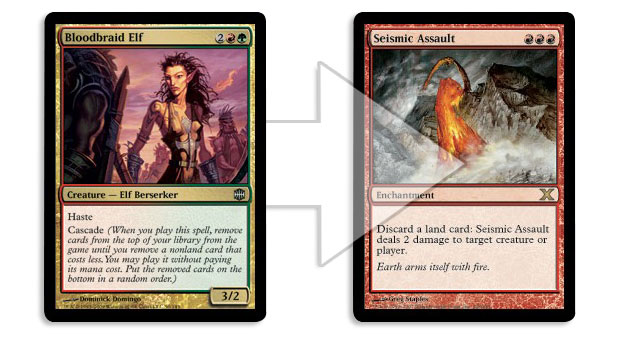 The way his deck is constructed—with so many lands and a very specific configuration of casting costs and cascade spells—means that whenever Parth played a Bloodbraid Elf, he was guaranteed to hit a Seismic Assault, and Bituminous Blast could only parlay into Swans, Bloodbraid Elf, or Seismic Assault. With the Swans and Assault on the board it is almost impossible for the deck to run out of gas with more than two-thirds of the cards in deck being lands—which also makes Ad Nauseam about as painless as it will ever get in a deck. On the other hand, the high concentration of lands seems to be at odds with the Spinerock Knolls in the deck—a card many people have had questions about upon seeing the deck list.

"I didn't like Spinerock Knoll much during the course of Regionals for that very reason—and because if you hit a combo piece you need and can't activate the Knoll, it's very annoying," said Parth although his experience was not universal among all the deck's pilots. "One friend of mine played the same main deck at Regionals, and he was a big fan of the Spinerock Knoll. I'm still not sold on it but more testing is underway."

With the recent dominance of Windbrisk Heights–powered deck lists, Parth had some specific job requirements for decks for Regionals.

"Coming in to the event, I thought I'd have a good match up against Black-White Tokens, which was a requirement I had for the deck I wanted to play," he explained. "I knew after only a few games of testing that this deck was going to have a hard time beating Faeries—I think it's the worst match up but I didn't expect to face it much. Blightning was also a bad matchup in testing; I was very concerned about Thought Hemorrhage and a fast aggro deck with discard effects."

"I went 7-1-1 in the Swiss, drawing into the Top 8 in the last round," said Parth of his tournament results. "The one loss I was dealt was by Scott Alshanski's homebrew Jund deck. I ended up playing him again in the Top 8 and managed to win it. I only played one Black-White Tokens over the course of the day—to my dismay—and luckily played against no decks with any blue."

Next Up: Nationals Season

If you are making your summer travel plans don't forget to consult the Nationals schedule of events. Last year's Nationals season—the first to include Pro Points as part of the National Championships—added a dramatic wrinkle to the oft overlooked Rookie of the Year race as Australia's Aaron Nicastri took advantage of his finish to close out his Rookie campaign globe trotting to Grand Prix and taking down second place in the Team Championship.

Despite only picking the game up in the last year, Parth Modi is now on the Road to Worlds and the next stop will be at U.S. Nationals in Kansas City, MO on the last weekend in July. Nationals season will be upon us shortly with events kicking off in June and kicking into gear in July.

U.S. Nationals is always one of the great Magic experiences and this year should be no exception. One of the standout events on the schedule is the 2009 Magic Online Live Championship—a $5,000 tournament for 8 players. There will be four events over the course of the weekend, each feeding two players into the Live Championship which features a $2,000 first prize. 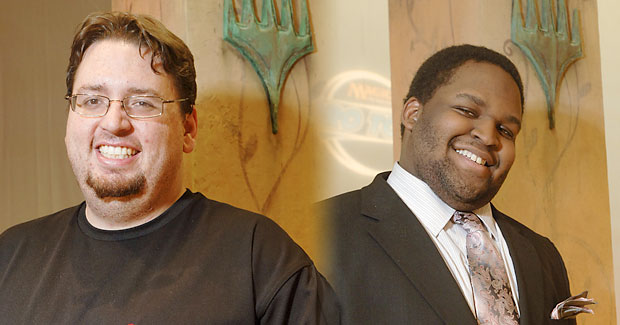 This coming weekend is the kickoff for the second leg of the 2009 Pro Tour season with Grand Prix–Barcelona. Like most European Grand Prix, the event will likely feature some absurd number of players. It is possible there will be even a few more than normal with Pro Tour–Kyoto Top 8 competitors Luis Scott-Vargas and Cedric Phillips among the players who normally don't travel to European Grand Prix tournaments who have stated that they will be heading to Spain. As always you can follow all the action on Daily MTG courtesy of the coverage team of Tim Willoughby, Hanno Terbuyken, and Dave Sutcliffe.

The following weekend is the event I really want to talk about since it is very rare that there is a tournament right in Wizards of the Coast's backyard. Combine that with the unique timing of being one weekend before Pro Tour–Honolulu should create an event with significantly greater attendance than any previous tournament in the great Northwest. It sounds like players will not be disappointed since the proximity to Wizards will mean plenty of spicy extras headlined by a special guest appearance by none other than Magic's creator, Richard Garfield.

There is a large concentration of Magic card artists who have settled in and around Seattle. If you are looking to get cards signed, buy original artwork, or simply meet some of the people that gave birth to Alara you will be hard pressed to find a better opportunity than Grand Prix–Seattle/Tacoma, with rk post, Mark Tedin, Pete Venters, Mike Dringenberg, Franz Vohwinkel, Chuck Lukacs, and Corey D. Macourek setting up shop.

Wizards R&D will also be in attendance and if you want to see how you fare playing against the people who designed the cards you play with, there will be gunslinging opportunities against the likes of Mike Turian, Mark Globus, Ken Nagle, Tom LaPille, and Gregory Marques, to name just a few. Of course, not everyone wants to compete against a Wizards employee, and on Sunday at 2 p.m. there will be a Sealed Deck 2HG tournament that pairs players with Wizards employees.

Between the announced artists and R&D members—and there should be plenty of surprise guests throughout the weekend—it sure would be nice if there was some commemorative item suitable for collecting autographs on, wouldn't it? For the first 500 players to sign up Cascade Games Tournament Organizer Tim Shields will be giving away a special playmat that would look just swell markered up with signatures from some of these talented artists, mad R&D geniuses, and, of course, the best and brightest players in the game. 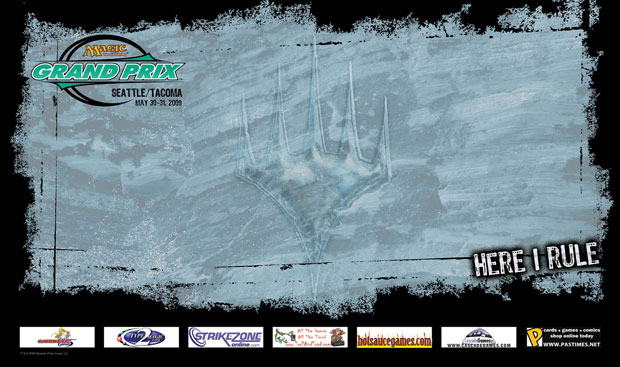 It is going to be a very special weekend and I hope to see you there!

Head to the forums and tell us about your Regionals experience. What deck did you play? How did you fare?