How to Keep Me Busy

hen I first got into Magic, I spent far too much time working as a tournament organizer, judge, and shopkeeper to play a ton of Magic. I almost never played Constructed since I was constantly cherry-picking my decks in a futile attempt to keep pace with the rampant demand for singles at the newly opened Neutral Ground—although later that year I would get a chance to try a new format on a trip out to the Wizards offices called Booster Draft, and I would never go very long between games of Magic ever again. 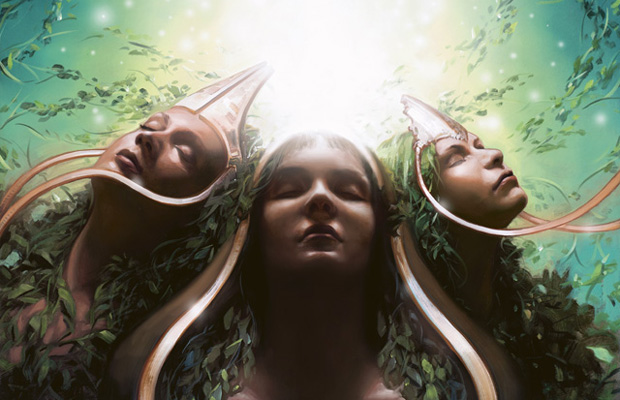 As our card-buying caught up to the selling I began to have more time to think about playing Constructed and would theorize about decks all the time, but nothing quite pushed me to actualize the decks.

Until they unrestricted Feldon's Cane in Type II (or Standard, as it is known today). That's right, there was once a restricted list for Standard that not only existed but included Feldon's Cane. With the abundance of cantrips that had been printed in Ice Age I became fascinated with the idea of building a deck that could cycle through itself very quickly with Knight of Stromgald–slaying Flares and intel-gathering Baubles. Nevinyrral's Disk cleaned up the mess and Jester's Cap provided an ultimate route to decking victory. With the Feldon's Canes the deck would become tighter and tighter with each pass as lands got played to the board and there was sufficient mana to operate.

The deck—which I have written about previously—was called How to Keep an Idiot Busy. Anyone who thinks the Idiot in the name of the deck was my opponent clearly does not know me well enough.

BDM's How to Keep an Idiot Busy

A young Zvi Mowshowitz would go on to play his take on the deck in the Junior Division of Pro Tour Dallas. Ironically, he would only play a single Feldon's Cane.

Zvi Mowshowitz's How to Keep an Idiot Busy

Several years later, I revisited the concept with the printing of Gaea's Blessing. It was card recursion and a cantrip all rolled into one, with the added bonus of making it almost impossible to get decked. The deck was Bant colors and would usually have a single win condition—when I was feeling particularly perverse it would be a Minion of the Wastes that could only be cast off Mox Diamonds. Gerrard's Wisdom would gain me tons of life and the combination of Pursuit of Knowledge and Sylvan Library could be cashed in for seven cards at a time.

The important thing about the deck was that by using a couple of Gaea's Blessings you could bias the remaining cards in your deck in a direction that was best suited to the task at hand. You could continually shuffle in your lifegain cards against aggro decks or rebuy your counterspells and card drawing against control decks. You could even play Armageddon after Armageddon against the combo decks. Adrian Sullivan—another Simic player with a soft spot for Gaea's Blessing—has referred to the process of biasing your deck for the matchup with Blessing as honing your deck's artificial intelligence. My friend Eric Kesselman would go on to Top 8 an Extended PTQ playing his version of the deck.

Eric Kesselman's How to Keep an Idiot Busy

Thanks for indulging me on this trip down memory lane. Once you get a look at my preview card you will see why I am thinking about the AI of the decks I will be building for the remainder of this year and just how busy this particular idiot will be. 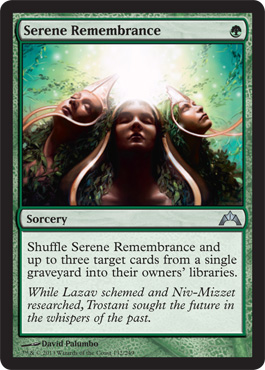 The comparisons to Blessing—and even Feldon's Cane and Elixir of Immortality—are obvious, but there are some key features that make this card different. For one thing, you only need one copy to keep your deck from running out of cards for as long as you wanted to keep playing. It took two copies of Blessing to "go infinite," but Serene Remembrance shuffles itself back in so you can just play a single copy and (assuming your card doesn't get countered or milled) keep your deck going.

Now, you don't get to draw a card when you play it but you do still get to mess with your opponent's graveyard if you see fit. This ability existed on Gaea's Blessing as well, but it never seemed as urgent as it does now, when people are setting up their graveyard with cards to flash back like Unburial Rites, reanimation targets like Craterhoof Behemoth, and general fodder for their Snapcaster Mages and Runechanter's Pikes. And even if you do, you get to shuffle your Serene Remembrance back for later use.

I know I am going to play this card, but will it see widespread play? The card itself does not impact the game upon casting and gets you nothing back directly for your investment, but with so much card drawing available in the current Standard you should be able to justify the singleton slot in a deck that lets you train your deck to be smarter while you set off a Sphinx's Revelation or use some of the new-fangled card drawing that the Simic visionaries have been cooking up in their vats.

I already talked about my love for the Zameck Guildmage last week and that was before I thought about pairing it with the likes of Strangleroot Geist. You can reset the undying status of a Geist staring down lethal damage by removing the +1/+1 counter to draw a card and get your Geist back so you can do it all over again. I may add Geist back into my Commander deck from last week just so I can "go off" with the Geist/Guildmage tandem and a Birthing Pod.

You can also be drawing Pursuit of Knowledge numbers of cards with the arrival of Prime Speaker Zegana. As soon as that card was spoiled, the Internet was abuzz with Magical Christmasland Cards featuring families in ugly sweaters drawing five cards thanks to their Thragtusk into Prime Speaker Zegana sequences. Sign me up for an ugly sweater, by the way! With the ability to draw that many cards—and all the other ways there are to draw scads of cards—it will be hard to resist sneaking a copy of Serene Remembrance into my decks so I can bias my deck. I have shuffled three copies of Wrath of God into my decks too many times to not consider playing this card in a format where the mana is this good and Supreme Verdict is available.

I am also thinking about this card in black-green-white decks should extort to prove Constructed-worthy. It is not hard to dig through your deck with the likes of Mulch, Tracker's Instinct, and Grisly Salvage and set up a situation where you are hiding behind a handful of extortionists and getting your deck down to a handful of cheap spells that you can draw each turn while draining your opponent for chunks of his or her life total each time. Back in the day, Zvi would recur his Fireballs with Feldon's Cane. With a squad of Orzhov creatures to hide behind, your Serene Remembrance can become your Fireball and recur itself.

This is a card I could see myself playing with at the Gatecrash Prerelease given the right tools to shuffle back. And it won't just be nostalgia—that would be idiotic.