couple of weeks back we filled in the blank on the Pro Tour schedule by officially announcing that Worlds was going to be held in New York City. Also contained within that column were tidbits about the date locations of U.S. Nationals and the Magic Scholarship Series championship. In pursuing the information for that column I sent a series of questions to our man on the inside, DCI Program Manager Scott Larabee.

Scott rarely lets me down but he left two questions conspicuously unanswered about the date, location, and formats of the 2007 Magic Invitational. For the past several years the events has been held in the virtual world utilizing Magic Online and stationed at E3, the electronic entertainment mega event in Los Angeles.

There had been a persistent rumor that the event was not going to be held at E3 this year and on top of that the event would revert to its original paper form. Scott’s lack of answer to my questions...

4. We cannot announce the Invitational at this time. Probably in 2 weeks.

5. We cannot announce the Invitational at this time. Probably in 2 weeks.

...all but confirmed the rumor that something was up. The mystery was finally put to rest when the aforementioned two weeks had passed and the questions and answers are now fit to print. Thanks Scott! 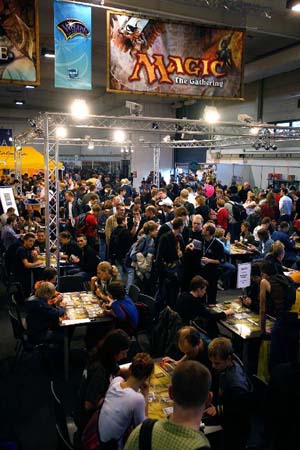 This is but a small fraction of the scene at Spiel (photo courtesy www.merz-verlag.com).

BDM: I keep hearing exciting stuff about the Invitational. Can you give the date and location?

BDM: Any truth to the rumor that the event will be held offline this year and return to Mark’s wacky formats of yore?

Scott: The Invitational has been held at E3 for the last few years. As E3 is an electronic games trade show, we used the Invitational as a means to help promote Magic Online.

Spiel is primarily a paper game convention, so it makes sense that we go back to paper for this event. Spiel is one of the largest gaming conventions in the world. The opportunity to showcase Magic: The Gathering at the show is incredible.

That is big news indeed.

I have never been to Spiel (sometimes simply referred to as ‘Essen’) and I am looking forward to traveling from the Pro Tour in Valencia to what many people consider to be the greatest game convention in the world to cover the Invitational (Yes, fellow coverage team members, I am attempting to shotgun this!). According to European Marketing Manager Helene Bergeot – who likely travels to more gaming events in a year than most people will attend in a lifetime – she felt that even North America’s grandest gamer gathering pales in comparison to this holy shrine of gaming.

“Having been to Gen Con and Essen,” Helene explained, “I can say Essen is THE game convention in the world. Compared to Gen Con, Essen is simply huge! It's the place where you can find about any type of game. Walking in the aisles of Essen is always amazing since you see families trying out some games and leaving the convention pushing trolleys with stacks of games on them!

“If you've never been to Essen this is going to be your most impressive immersion into the world of games; the opportunity to experience the biggest and broadest variety of games and gamers,” Helene raved. "The convention is unique for the staggering number of visitors, for the vast room of exhibitors, and for the diversity of the audience which ranges from kids to adults.

“Hosting the Invitational at Essen is the perfect convergence between the ultimate gaming show and the battle between top Magic players,” she concluded. “It's recognition for Magic: The Gathering being an established phenomenon in the game industry.”

In preparation for my role as a commentator at each Pro Tour I peruse the most recent events in the relevant format for trends, rising stars, and plain ol’ stuff to talk about in the booth with Randy Buehler. While doing such research for Geneva, I realized that one of the players Randy and I would certainly be talking to and about was André Coimbra. 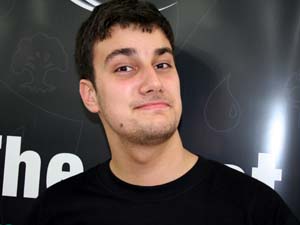 André Coimbra is on an impressive run in Limited play.

The young Portuguese player, whose most notable finish was a Top 8 at Worlds in 2005, has only played in three Pro Tour events featuring Limited formats. Two of those were Worlds ('05 and '06). Between those two events he is 11-1 in Limited. He also finished 12th at Pro Tour–Kobe in the intervening months.

Along the way, André began traveling to Grand Prix events with more established stars such as his countryman Tiago Chan. Just look at the finishes he racked up at the last five Limited GPs he attended:

Despite missing out on Pro Tour–Prague – arguably an event with very high expected value for the emerging Limited juggernaut – André racked up 33 Pro Tour points for the season and earned Level 4 status in the Players Club. He was gracious enough to sit down with me in cyberspace for my first 2007 installment of Five Questions:

BDM: You have done pretty well recently in Limited events. Is it fair to call you a Limited specialist?

André: I used to call myself a Composite player as I was good at both Constructed and Limited, but not very good in either of them. However, I learned a lot about Limited in 2006, playing GPs in America, Japan and Europe. I learned not only from the best players from all over the world but from the experience I got from GPs and Pro Tours. I would call myself a Limited specialist at the moment.

BDM: This is the only individual Limited event of the season. Does that worry you? Or are we going to see a reverse Kenji where you master Constructed this year?

André: Last year I missed Prague because I was not qualified and I just played one Limited Pro Tour. I think it won't be a big problem just having one Limited Pro Tour this year. About a reversed Kenji: that is a tricky question to answer. It depends on many factors in my personal life but I will try my best with the time I have for Magic to get my Constructed game to the top and maybe a Constructed Top 8.

BDM: It seems like a pretty exciting time to be Portuguese and play Magic. You have been doing really well, Tiago had a Level 6 season, both Marcio and Paulo Carvalho did well. How many players in your area are qualified for Geneva?

André: In Portugal there are around nine players qualified. Five are from Lisbon and will playtest there, while the remaining playtest in Porto, with me being in the second group. We will also likely have one player from another country that is qualified playtesting with us, so we will have five qualified players in my area.

BDM: Is this weekend’s Prerelease for Planar Chaos going to be part of your training regimen? From what you have seen so far, what do you think the impact of Planar Chaos will have on the decisions you make in the first two packs of Time Spiral?

André: I'm quite excited with the idea of playing the Prerelease on Saturday as I haven't played much Magic during the last few weeks due to exams. It will be a good opportunity to see how the cards interact and have a good time playing Magic. The second part is too hard to answer at this point, but I guess new color combinations will emerge on the top, giving you more paths in the first boosters.

BDM: How much practice do you need to feel comfortable with a new set before going to a PT? Will you be able to get enough for this one?

André: I like to have one or two weeks playing 4-6 drafts per day on Magic Online’s 8-4 queues (anyone can do that!), but there won't be Planar Chaos on MTGO in time to playtest for the Pro Tour. I guess that 20-30 drafts with good players would be enough. I won’t be able to playtest as much as I want as I have three exams in February before the Pro Tour. However it's not a new full set. It is just an "update" to triple Time Spiral draft which I mastered at some point of 2006. I think that with 10-15 drafts plus the Prerelease I can get to a good level. I think I will be in good shape for Geneva.

With Mike Flores off big-timing with the columnists that get preview card assignments, I am going to wander into my old SWS territory very briefly to remind you to check out the Yokohama PTQ Top 8 decklist page. Two more events from the first week of events have been added since the last time you clicked on this hyperlink in my column and it also includes the results from a PTQ this weekend past in Oklahoma.

The top decklist was piloted by Ryan Gin and apparently the winning play involved cycling two Sensei’s Divining Tops back and forth from the top of his deck to build up as critical storm count for the Tendrils win – nice job Ryan! There has been some dissension among the storm partisans as to who had the better list (Jelger Wiegersma or Raphael Levy), but Ryan took a different route. By clicking on card images in the coverage from The Finals he was able to parse one of the Japanese takes on the deck and opted for that version.

A modest twist on an established archetype is not going to get anyone truly excited, but a promising second-place finish by a new deck type (new at least in the current metagame) will always get me excited. Judging by some of the buzz on my local mailing list, I am not alone in admiring Carl Hendrix’s Orb-Opposition deck with Beacon of Creation.

The deck relies on your usual assortment of mana accelerants with a novel twist. Besides the birds from paradise and elves from Llanowar, Carl’s deck features the synergy of Wirewood Symbiote and Coiling Oracle. Actually, is that card drawing or is it mana acceleration? When you are untapping Spectral Force in the process, I don’t guess it matter much in the end.

So whatcha doing this weekend? Playing at Midnight? Saturday or Sunday? The main event or side drafts? Go to the forums and let me know. And don’t forget to share your prerelease experiences in the forums afterward as well!