couple of weeks ago when faced with the daunting challenge of filling Aaron Forsythe's shoes for one Friday, I wrote about four different cards that I have tried to insinuate into Wizards over the years. Everyone has at least one Magic card design lurking within them. You just have to look at the message boards and you will see plenty of sigs from people who have not only designed their own sets, but entire blocks.

From Darwin Kastle's Avalanche Riders through to Bob Maher's Dark Confidant, Invitational cards have become a doubly impressive gallery of cards that includes three players from the Hall of Fame and many fine tournament-quality cards. You can expect to see the Dark Confidant and Voidmage Prodigy join the Avalanche Rider, Sylvan Safekeeper, and Shadowmage Infiltrator as accompanying illustrations for Hall of Fame profiles in the coming two years.

When Terry Soh was selected to go to last year's Invitational with the R&D pick, he was still on the first leg of a career that Terry can only hope leads him to a similar destination many years from now. At last year's Invitational there were actually two chances to get a card created – one for the winner along with the usual fantasy portraiture, and another voted on by the fans from the array of submissions by all the contestants.

Terry was selected to attend the Invitational largely on the basis of two Pro Tour Top 8s that were credited to his non-stop practice with Magic Online. He lived up to the invite and was among the most prepared competitors at the event, cruising into the finals to square off against Resident Genius Tsuyoshi Fujita.

Terry's card design as submitted was Jin, Master of Disruption and read as follows: 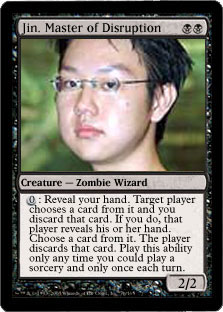 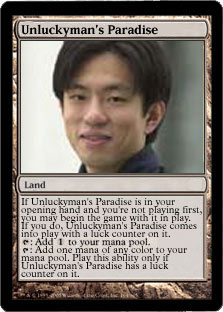 By the time the finals started, it was evident that Tsuyoshi Fujita's card was going to get made – in some form – one way or the other. Even if he didn't win the finals, his card was the clear favorite among the voting public. If Terry lost the match, however, it meant that "Jin" would not see print and Jeroen Remie's Rock Beast would be the people's choice.

Once again Terry's preparedness paid off as he faced off against a more fun-filled Fujita. While Terry had selected all A-list decks for the Constructed portions (and was running Tooth and Nail in Standard), Fujita had opted for a rareless rat build for Standard. The old adage about bringing a knife to a gunfight springs to mind as Soh emerged from finals with the win.

The only real loser from the match was Jeroen and his Rock Beast, as both finalists' cards were headed into the development file. Fujita's card is still floating around the halls of R&D, but I do have Terry's card as today's preview treat. 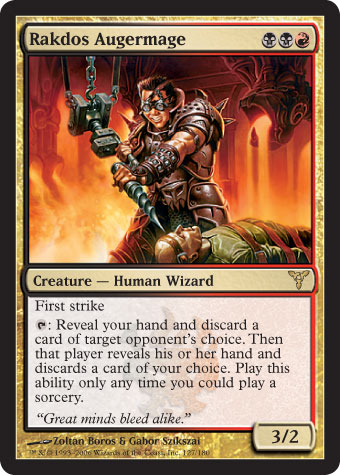 As you can see, the card has undergone some alterations from Terry's original design. The casting cost was upped by one and another color was added to bring him into the Rakdos guild. He gained a point of power and first strike. With all that plus his ability, you have to wonder if a monochromatic version of the Augermage would not have cost four mana.

The free activated ability has been modified to require tapping, which should create a dilemma when trying to decide whether you are going to be the control or the beatdown. What is clear is that he will certainly play well with others in his guild. Mike Flores's preview card featured the Hellbent keyword and the Rakdos Pit Dragon, a beater that seems like a mighty fine companion for Terry's creation.

Rakdos appears to be a guild accustomed to getting its cards into play and happily playing off the top of the deck. Slower, more controlling strategies are going to hate to see this guy. Just imagine him in Limited alongside a lineup of cheap, efficient bears. If you can get out to an early creature advantage, you can really punish a slow draw. The three points of first-striking power can also slow down a similar draw on the other side of the table.

In Constructed formats, he seems to have powerful possibilities especially against control and combo decks. He would dismantle Magnivore decks if they could not immediately deal with him via Pyroclasm. The Augermage could sit back and calmly pluck Wildfires and Magnivores.

One card that seems like it will have some nice synergy with Terry for the brief time they share in the Standard format is Sensei's Divining Top. A little Top action would allow you to protect cards on the top of your deck where your opponent could not fully exploit the symmetry of the card.

It should be pointed out that due to the synergy of the Rakdos Augermage and the Hellbent ability, it is unlikely that the last two Invitational cards will often find themselves fighting side by side.

The advent of the Rakdos guild will certainly see players dusting off their long neglected Sulfurous Springs in anticipation of having the full suite of eight red-black lands to work with. I know that I will be looking forward to testing out something like this as soon as I can get onto a beta account.

As for the Unluckyman's Paradise, you will have to wait until Time Spiral to see how that turned out.

I'd like to come up with some insightful question that probes the inner workings of a Magic player's brain, but let's not kid ourselves. This is a card preview, and you want to discuss the card! Have at it.