n yesterday's Top Decks Mike Flores presented an overview of the Standard action that took place throughout North America. He touched on the results from North American PTQs, the notable decks to come out of the two $5K events, and some of the cool ways people were "cheating" Emrakul, the Aeons Torn onto the battlefield. (I am pretty excited about Alex Viksnins's Brilliant Esper deck. I had been staring at my playset of Brilliant Ultimatum and my Prerelease promo Emrakul, the Aeons Torns but could not see how to make the deck come together. Alex got it all to hang together with the tutoring power of Liliana Vess.)

One event that was not included in Mike's wrap-up was a late-breaking Japanese PTQ that was won by one-time Player of the Year, future Hall of Fame contender, and one of Magic's certifiable rock stars, Kenji Tsumura, who will be making a return to the Pro Tour in Amsterdam. 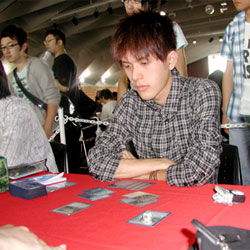 Kenji, who has six Pro Tour Top 8s and twelve Grand Prix Top 8s (with two wins), won't even be eligible for the Hall of Fame for another two seasons, but even if he never played on the Pro Tour again he would be a slam dunk on my ballot (along with his good friend Masashi Oiso). Kenji took time off from the Pro Tour to finish school, although that did not stop him from picking up his sixth Top 8 at Worlds 2008 post-retirement. Kenji played in Grand Prix–Yokohama and announced his return to the Pro Tour with the intention of qualifying for San Juan. Kenji played in that Extended tournament with a creatureless blue-black control deck that featured Night of Souls' Betrayal to deal with Thopter Depths decks and a removal package to deal with Zoo. Kenji squeaked into Day Two by winning his final match in extra turns—while placing a counter on his opponent's deck so he would not accidentally lose to a Pact in those extra turns—but fell short on Day Two.

Cut to the Pro Tour–Amsterdam Qualifier season and the release of Rise of Eldrazi. Kenji was looking over the new set and evaluating the impact that the new cards would have on the Standard format. 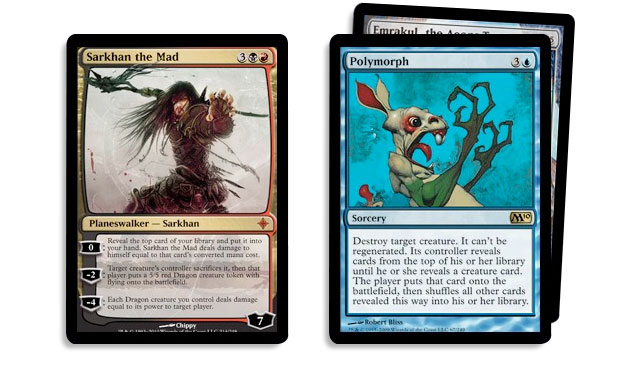 "Jund got Sarkhan the Mad—some of my friends said it's the best card in the mirror match and it is also good against Polymorph," said Kenji of the format's most persistent deck. "Wall of Omens seems good for blue-white control but in my opinion, I don't like it because it can't stop Putrid Leech and Raging Ravine—which is the most important problem for blue-white."

"I seriously wanted to play Emrakul, the Aeons Torn!" he explained. "I told [Masashi] Oiso about that and he quickly made the Polymorph deck. It was very good in my practice so I wasn't worried about my deck choice and I had one more great reason to play a rogue deck—almost all the players don't know how to play against it."

In fact, Kenji took two shots at the PT invite last weekend, finishing third in an Osaka PTQ on Saturday before "getting there" with a first-place finish in Okayama.

4 Negate 1 Into the Roil

Kenji was familiar with the deck previous to the introduction of Rise of Eldrazi, but the additions of Emrakul, the Aeons Torn and Awakening Zone pushed the deck over the top for him. 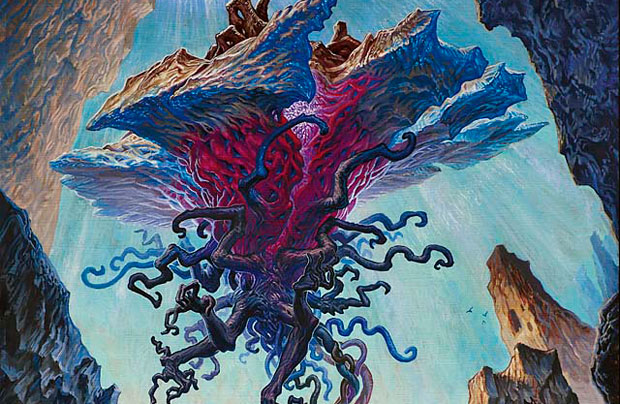 "There are only a few cards to remove Emrakul, the Aeons Torn and I can counter those cards with Negates," he continued. "Awakening Zone is awesome. It gives me tokens for my Polymorph, give me a lot of mana and give me enough chump blockers. Sometimes I would lose some games after resolving my Polymorph. If my opponent has enough creatures to kill me, Emrakul, the Aeons Torn or Iona cannot attack but Awakening Zone gives me a lot of chump blockers so finally I can move to attack—I think Awakening Zone made this a tournament-level deck."

Judging by recent tournament results, White-Blue Control has become the deck to beat and Kenji felt that his deck was more than up to the task, citing it as his best match-up. His worst match-up was an aggro deck like Boros Deck Wins—which is conveniently and consistently smashed down by those white-blue decks.

"I know everyone wants to know about [how the deck does] against Jund," slow-rolled Kenji. "In two PTQs, I played against Jund seven times and I went 5-2 against them."

One of the knocks against Polymorph decks is that it is easily disruptable by killing the target of the Polymorph—not a hard task when you are picking on puny Plant and Spawn tokens—but Kenji explained that the deck was not intended to be played recklessly and that it has the mana and plenty of time to wait for just the right opportunity. One mistake Kenji noticed other people making with the deck is hurrying to try and get their combo; he pointed out that he would rarely play a Khalni Garden on the same turn he was going to Polymorph. Most of the match-ups come down to who has the most mana—and the most patience.

"I will not play Polymorph without Negate unless my opponent tapped out all his lands," elaborated Kenji. "I have big advantages in a long game because I have 4 Jaces. I also have more mana than my opponent with Rampant Growth, Explore, and Awakening Zone. I know my opponent wants to keep mana open every turn to kill my tokens. So if my oppornent doesn't have a damage source on his board I just play a land or play Jace or Awakening Zone. Then he needs an answer for them like Maelstrom Pulse or Oblivion Ring. Then they only have few untapped lands and if I had a Negate—or my opponent was tapped out—the game was over. This deck seems like combo deck but in fact it is a control deck. Somtimes I can kill my oppornent so fast by Polymorph or I can play a long game with my strong permanents."

I asked him about the story that was relayed to me by Mat Marr from Grand Prix–Yokohama about Kenji placing a counter on his opponent's deck so he would not forget to pay for his Pact as the elimination match was heading toward extra turns. In a competitive environment like a Grand Prix, players look for any edge, will good-naturedly fist-pump at an opponent's mulligan, and would happily take a free win from an operational lapse like forgetting to pay for a Slaughter Pact or Pact of Negation. 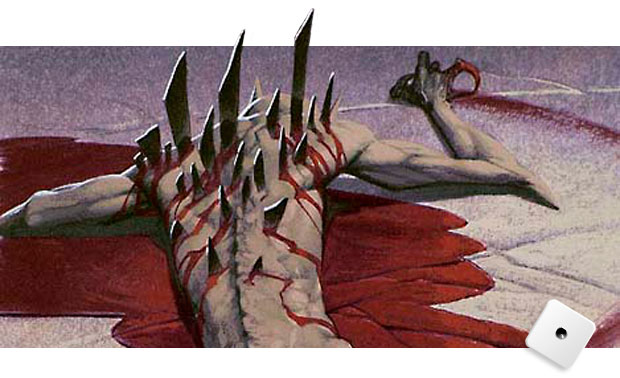 "It is true that I put a counter on his deck because that kind of win means nothing for me and I want to be Kai Budde," said Kenji, who was inspired by watching Kai win the first Pro Tour Kenji ever played in. "I just want to be strong. I don't need a win by luck. If was I playing against LSV or Tomoharu Saito, I would feel it is a good challenge and a good chance to beat the best player in the world. If I lose normally I can think, 'Sure, he is the best' and enjoy the game but if I lose by such a foolish thing like forgetting to pay for Pacts—can you feel good about that?" 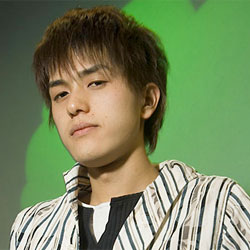 Despite his amazing career Kenji does not view himself as an elite player like Kai. He does recognize that he is well-regarded by the Magic community and would never want to tarnish that reputation.

"I really respect this game, all of my opponents, and friends. I want all of the players to enjoy every tournament and I want to see them again at the next tournament," he said to conclude that matter.

During his absence from the game, Kenji has enjoyed watching the meteoric rise of Tomoharu Saito and Luis Scott-Vargas to the top of the game and it has inspired him heading into his return to the Pro Tour.

"I'm aiming at 19-0 at PT–Amsterdam," he said with a wink—a reference to Scott-Vargas's 17-0 start at Pro Tour–San Diego earlier this year that saw him fall just short of the undefeated PT accomplishment with a loss in the semifinals.

Decks to Beat (Or to Beat With) For Nationals Qualifiers

North America, Australia, and New Zealand are only a week away from the newly rechristened and hybridized National Qualifiers (once known as Regionals and State Championships). With a Standard PTQ season in full swing and National Qualifiers already taking place around the globe, there are plenty of decks to choose from and to prepare against. In the previous interview, Kenji—who played a deck you want to test with/against—mentioned that several Japanese players felt that Sarkhan the Mad was essential to winning the Jund mirror match. Sure enough, a Rise of Eldrazi–injected Jund list won a National Qualifier there last weekend with help from Sarkhan the Mad.

In California Matt Sperling riffed off of a winning list from a German National Qualifier and won a Blue Envelope (an invite to Pro Tour–Amsterdam) with the Eldrazi Conscription / Sovereigns of Lost Alara combo in a Mythic shell. Lauren Lee also won a PTQ with Mythic, but hers was a more traditional variant.

2 Rafiq of the Many 2 Jace, the Mind Sculptor 1 Elspeth, Knight-Errant

Pro Tour–San Diego 2007 winner Chris Lachmann came in second at a PTQ in New York and played an exciting four-color control deck that was chock-full of planeswalkers and cards that cascade into Spreading Seas and Wall of Omens—or Meddling Mage and Luminarch Ascension after sideboarding.

If you have not already bookmarked the deck lists page in the Event Coverage section, you should do so now. You will find deck lists from National Qualifiers, PTQs, and all sorts of online events. It is an amazing resource for anyone trying to qualify for the Pro Tour, attend their National Championships, or just trying to win the foil Cloudpost being given away this month at Friday Night Magic. 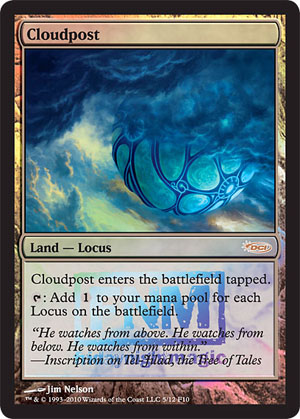