Kicking Off the Second Half

n last week's column, I left you with a Sealed Deck pool of Zendikar cards to chew on. It was the material I had to work with for the last Sealed flight I played in during Prerelease weekend and took to a 3-1 record. Looking at the forums it seems that most readers opted for a blue-black build to take advantage of a suite of removal that included Hideous End, Heartstabber Mosquito, and double Disfigure. I certainly considered playing my black and knew immediately I was going to play blue. Sphinx of Jwar Isle dies to nothing in the format except Day of Judgment and the situational Gatekeeper of Malakir and, and it could fly in formation with a squadron of cheap fliers carrying Equipment. I decided to complement the blue with red for some allies, three removal spells, and a couple of Zektar Shrine Expeditions to try and steal some quick wins. Here is the deck I ended up playing:

While the black removal was cheaper, I decided to go with the red package, because the Spire Barrages allowed me to use them as either removal or a game finisher. With the speed the deck was capable of, I really wanted something that would let me get those final 4 or 5 points of damage across. The other reason I went red was the Shatterskull Giant duo. Early on in the Sealed Deck format, I have come to love this card. It can tussle with fat green creatures, and in this deck I wanted him to hold the ground while my blue fliers and Zektar Shrine Expeditions took care of the offense. Interestingly, the red quests came out for sideboard cards more than anything else in the main deck. I had to bring in Demolish against my Round 3 opponent, who was able to stalemate the board with a Giant Scorpion equipped with Spidersilk Net. (He also had other Equipment that was causing me problems, but that was the most pressing for my small blue airforce.)

The deck performed perfectly for me through three rounds, including a three-game battle in Round 2 when my turn-six Sphinx was killed by the aforementioned Day of Judgment. I sided in two copies of Spell Pierce and managed to escape with the win despite the four-mana board sweeper getting played in all three games, and resolving twice. I was trying out Tempest Owl, since it could come down on turn two and attack as a 3/3 on the next turn thanks to Trusty Machete, but the card backfired on me in Round 4 when I played the owl in an attempt to tap some blockers, only to create an additional obstacle to overcome when it fell to Summoner's Bane. I was crushed in the next game when I played around Vines of Vastwood and traded my Sphinx for an equipped creature that could have potentially finished me. My opponent played a Mountain post-combat and used a Magma Rift to kill my other flier that was waiting to untap for the win.

I ended up opening four Sealed Decks throughout the weekend and found them all to be highly playable, with plenty of cards to suggest multiple builds for each deck. All in all I had a great weekend and cannot wait to play in some Sealed Deck PTQs with Zendikar. They start this weekend, and I cannot wait to see what the attendance for these San Diego qualifiers looks like. Zendikar is a fun set to open and play Limited with, PTQ attendance has been steadily increasing, Limited events have traditionally yielded larger turnouts than Constructed PTQs—albeit before Standard was a PTQ format. You can find the PTQ schedule for San Diego here. Zendikar has not come to Magic Online yet, but the online PTQs started yesterday with Magic 2010 Sealed deck as the format. You can find those details here.

I have had fun getting a chance to talk about Limited these past two weeks, but if you want to see how the pros approach the Zendikar Sealed deck format—and, more crucially, the draft format—then you should make a point of aiming your browser down under, where Ray Walkinshaw is looking over the collective shoulder of the pros. Grand Prix–Melbourne is the first high-level event to incorporate the new set, and you can expect to see what cards make up an undefeated Sealed Deck, the opinions of the pros on what cards are first-pick-worthy in draft, and the impact the new set will have on the heated Player of the Year race.

In addition to the usual Japanese suspects who will attend any Grand Prix anywhere in the world, it seems like some American and European players—who rarely show up for the semiannual Australian Grand Prix events—are going to make an appearance in Melbourne to fight for the available Pro Points. Judging by Luis Scott-Vargas' status updates, he is drafting his way toward the tournament site at local shops down under. Martin Juza, someone I think can make a real surge in the PoY standings in the last half of the season, is also in Australia, although it sounds like his luggage failed to make the journey with him. In a race that will likely come down to the very last rounds of Worlds in Rome, every point will matter. And with what is likely to be among the smaller Grand Prix fields of the year, I am expecting a star-studded Top 8 for this weekend as the players gear up for Pro Tour–Austin next weekend. 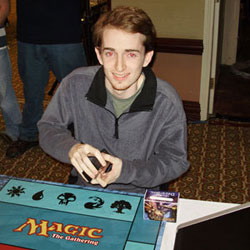 Most players qualify for a Pro Tour at a PTQ, but when the Pro Tour rolls into Austin, Scott Barrentine's PTQ experience will be a little different than most. After winning the StarCityGames Dallas 5K a few weeks back, the 21-year-old Texas A&M student went 8-0 in the Sunday PTQ—only to drop before the Top 8 in the hopes that he was qualified on rating. After a brief scare, Scott got the email equivalent of the blue envelope and will be playing on the Pro Tour in his home state. Scott was mum on whether he would be playing Cosi's Trickster during the Constructed portion of the event, but I would bet on Merfolk based on Scott's success with the archetype in the two events during the Dallas 5K weekend, a Top 16 at Grand Prix–Denver, and a Top 32 in the Legacy-format Grand Prix–Chicago.

Scott made the decision to drop before the Top 8 rather than facing a handful of mirror matches, as he had multiple friends playing the deck after his success with the deck in the 5K.

"It was two Reveillarks out for two Harm's Ways off from Thaler's Nationals winning list at the StarCityGames 5K," said Barrentine of his decision to drop and keep his fingers crossed on the rating invite. "Then when I expected mirrors and saw almost no Jund for the PTQ, I moved two Reveillark and a Path to Exile to the board for three Sower of Temptations. I guess the most unique thing was inspiring my friends Taylor Webb (13th at the 5K), Aaron Tobey, and the two guys who played the Merfolk mirror in the Top 4 of Sunday's PTQ to play the deck. It would definitely be pretty embarrassing if I [didn't] get there after dropping from a PTQ, but I factored the possibility of a pair of mirror matches and decided missing on rating was less likely than missing the 3-0 in Top 8."

"Honestly, [you] probably shouldn't ever try to qualify on rating. With no other Merfolk decks in the Top 8 I probably would've gone ahead and played for it," said Barrentine when asked to give advice for players looking to earn a ratings invite to the Pro Tour. "Pretty much the only way to gain enough points is to not lose over a long stretch at a high K value, which requires winning (or, sigh, dropping) big tournaments anyway. It's a little frustrating trying to break into the top 100 who qualify knowing that 80 of those ridiculous ratings belong to pros, PTQ winners, and Grand Prix Top 8ers who are qualified anyway, since that's the only realistic way to achieve that level."

If you want to brush up on the Invitation policy for the 2010 season—which will only use Total ratings invites starting with San Diego—you can find the updated policy documents in the DCI Document Center. While Grand Prix–Melbourne will give us our first high-level look at the new Limited format, the 10K weekend in Philadelphia hosted by StarCityGames will provide that same window for the Zendikar-fueled Standard and Legacy formats. Saturday will be a $5,000 Standard tournament and Sunday will be Legacy. What cards from Zendikar—aside from the new enemy-aligned fetch lands, which seem like a given—do you expect to see in the winning deck list on Saturday? What about Zendikar's impact on Legacy? Head to the forums and make your predictions.