Frank Karsten and Mike Flores have touched on the results from Grand Prix–Kyoto in the past two days, but I am going to revisit the event to look at the metagame breakdown from the second day of what should be a very important tournament when people begin preparing for their Regionals metagame.

The most successful decks in reaching the second day of competition in Japan all had the words 'Mine,' 'Tower,' and 'Power Plant' on their decklists. All totaled there were 92 of each of the Urza lands fighting for the cash, points, and glory in Kyoto, with 23 different players piloting a big mana deck on Day Two. Of the Tron subtypes, tournament winner Yuuya Watanabe's Izzetron deck was the most popular flavor with just over half of the Day Two players flashing out Bogardan Hellkites and Sulfur Elementals.

Another quarter of the Tron decks were made up of the version that has been dubbed blue-green CELL. I am not quite sure how the metagame was broken down exactly because I would probably lump Naoki Shimizu's Tron-fueled Shapeshifter/Hermit monstrosity under the sub-heading of Pickles, but that is broken out as a separate subtype with three players. Personally I am very excited about this deck and will certainly be hanging around the casual room over the next few days trying it out as it features many of my favorite cards (including Chord of Calling).

Another take on this deck can be found by dredging through the Day One blog entries from the Kyoto coverage for the decklists from Grand Prix Trial winners. Personally I like the Shimizu version better, but I have to admit I like seeing the Hermit paired up with the ersatz Opposition. Of course I can't help but look at that combo – with Brine Elemental for the lock – and fantasize about a Natural Affinity in the deck so you could Glare all their lands.

Yes. Yes. Yes. I know that's awful but I just can't help it; Natural Affinity has long been a beloved nuisance, poking its way into many a deck it has no business being in. Besides if you get Hermit and Shapeshifter going even once you have eight 3/3 saprolings that want no part of tapping unless it is to attack. The Glare itself is probably more of a hindrance than a help.

You can find another take on the Shimizu version from the Trial decklists entry at the very bottom. Jun Oosawa's version featured many of the same cards but opted for a lone Spell Burst for the late game.

The next most prevalent Day Two deck archetype were SolarX decks, which included 14 decks that were labeled Solar Flare and another three that were dubbed Aqua Flare (which I can only presume indicates the presence of Body Double as the reanimation device of choice, such as Tsubasa Tomii's Top 8 version from the main event).

Angelfire decks were the third most likely deck to found playing on Day Two in Kyoto, and managed to place two decks in the bracketed rounds (I originally miscounted this as zero, my bad). The Japanese coverage defined the archetype as being three-color control. I would assume these decks were very similar to the Karsten-built deck that Tiago Chan took to the Top 8 of Worlds that featured cards like Demonfire and Sacred Mesa.

Looking through the Trial page for an example of what current builds might look like, I could only find a build by Takatoshi Saito that strikes me as much more Angeldad than Angelfire.

4 Wrath of God 4 Call of the Herd 4 Castigate

What really struck me from the Japanese Day Two breakdown was the big showing by Gruul Aggro – not to be confused with two Zoo players who also broke through – with an even 10 Gruuligans getting into the 128-person scrum. It appears that the rise of this deck can be directly tied to the demise of Boros, a traditionally popular and successful deck that only pushed five players into Sunday action.

3 Rift Bolt 3 Call of the Herd

The secret to this deck's success appears to lie in Sulfur Elemental's ability to switch-hit, as well as the backbreaking power of Blood Moon against so many of the format's expensive mana bases. The Sulfur Elemental was probably not in the Top 10 most talked about Planar Chaos cards in the weeks after the set was released, but it has been on a media blitz since the GP because it can serve admirably against both control and white weenie aggro decks. I am not even sure why the card was relegated to the sideboard in Katsuhiro's build.

Two different Trial winners chose to run maindeck copies of cards that are traditionally relegated to games two and three. Ken Ishimaru's deck (which contains one unknown card) is not quite Gruul and not quite Zoo and certainly not Mono-Green Aggro (although that is what it bears the closest resemblance to).

3 Call of the Herd

That's a quick look at the Top 4 archetypes from the event but there were 36 different decks types in play on Sunday according to the Japanese coverage staff. You can find the exact breakdown in the coverage.

One deck that did not show up on Day Two but intrigued me from the Trial coverage was this little black number featuring a set of The Rack and a roster of b-list constructables – with an extra card to even out the previous decklist.

While there is still plenty of time between this event and Regionals – not to mention a whole extra set of cards – this should provide plenty of fodder for practice in the PE's, 8-man queues, and the Tournament Practice room. Look for me there – I'll be the guy with Natural Affinity.

This kind of snuck into the Amsterdam coverage after the fact, but anyone looking for some details about Two-Headed Giant draft can go here and find all the decklists from the Top 4 as well as each and every pick all four teams made. The loss of a round in the Top 8 ended up freezing some administrative coverage (decklists, picks) from getting up the Sunday of the event but I wrapped them up when I got home and they were posted shortly thereafter.

It is a little tricky to navigate the picks without the Draft Viewer (which will hopefully be up and ready to support 2HG by the time San Diego rolls around) but if you are preparing for the format, you can do a lot worse than seeing what cards Gabriel Nassif picks first from a Time Spiral pack in this format.

One Hall of a Tournament: Five Questions with Hall of Famer Rob Dougherty

When Rob Dougherty was being discussed a potential inductee into the Pro Tour Hall of Fame over the past two seasons, his role as a tournament organizer was often cited. Rob has been running the Your Move Games store in Massachusetts (not to mention Rhode Island) for as long as I can remember and running PTQs and Grand Prix for nearly as long. 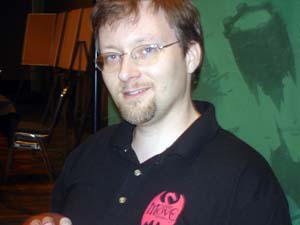 Rob Dougherty, a Massachusetts Magic fixture.With the fifth Massachusetts-based Grand Prix looming in little more than a week I caught up with Rob for five questions about the event, getting there from the airport, and the history of GPs in his hometown.

1. This is the fifth Grand Prix in Massachusetts. What do you remember most from GPs past?

Rob: Unfortunately the site is no longer available, but I really loved hosting GPs at the Castle (it was an old armory right in the city that looks just like a castle complete with a dry cement moat!). The look was perfect for Magic.

2. What are you expecting, attendance-wise?

Rob: That's a tough one. Two-Headed Giant States attendance around New England was a bit weaker then I expected. On the other hand, recent Grand Prix have gotten crazy numbers. I'll put the over-under at 300 teams and we are setting up the hall for 500 teams. We're good with any number. The hall is huge, so if we get a massive turnout we can always increase the seating for the GP.

3. This event is not exactly in Boston. What is the best way for people coming in from out of town to get to the event – specifically players flying in?

Rob: For people driving, the site is great. It's got infinite free parking and very inexpensive hotel rooms.

For Boston players without cars we will be running a free shuttle from the commuter rail stop.

Obviously for people flying, the distance from Boston is a bit inconvenient. However we have a free bus from the airport to the site. It will be stopping at each terminal to pick up players and take them directly to the site. In addition you can register while you're on the bus so you can get right to playing when you get to the show.

4. What else is happening besides the main tournament? Is there any reason to come to the event if you don't plan to play in the big tournament?

Rob: Oh yes, there is going to be something for every Magic player. The site is going to be open 24 hours a day from Friday to Sunday night and we will have constant tournaments and side drafts going on. We are also going to have Magic artist Lars Grant West. For a complete list of side events see www.tjcollect.com.

I'm really excited about the playmat that we have for the GP. I feel it looks fantastic and I think our player will agree. The first 800 players (each player on the first 400 teams) to sign up will receive one for free. 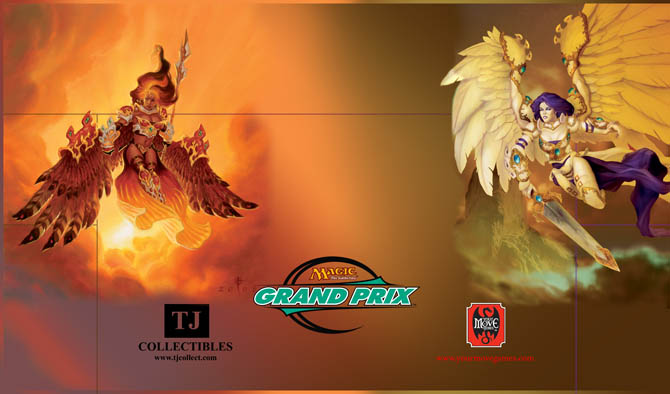 5. I have to ask one question of you as a player as Block has traditionally been a big event for you. How are you prepping for Pro Tour–Yokohama?

Rob: I love preparing for Constructed events. Building and tweaking decks is as fun to me as actually playing. In the past I've done my testing in person at my shop but this time around I'm doing most of my testing via Magic Online.

Firestarter: What's in your deckbox?

I'm curious what decks people are playing these days in Standard and Extended. How did the PTQ season affect what Extended decks you will be playing in your local tournaments? What about Standard and the affect of Grand Prix–Kyoto on the pre-Regionals metagame? Go to the forums and share your pet decks.