ast weekend was an amazing handful of days for Magic players. There were more than 1,000 players competing in Legacy events in France and Philadelphia with well over another 1,000 playing in the StarCityGames Opens and TCGPlayer Championship. There was also a record-breaking turnout in Santiago, Chile, for a Standard Grand Prix. That does not even begin to take into account PTQs, Grand Prix Trials, and the always-popular Friday Night Magic tournaments going on all over the world.

With Grand Prix Washington DC on the horizon, I wanted to catch up with Philadelphia's Legacy Champion Ari Lax and discuss his win with the deck known as Death and Taxes, which he took for a test drive in preparation for the upcoming Legacy GP. Despite him being just twenty-three years old, it feels like Lax has been around a lot longer than the span of time since his Pro Tour debut at PT Kyoto in 2009. Since then, he has racked up just shy of 120 lifetime Pro Points, six Grand Prix Top 8s, and a couple of heartbreaking misses that left him watching a Pro Tour Top 8 from the sidelines. 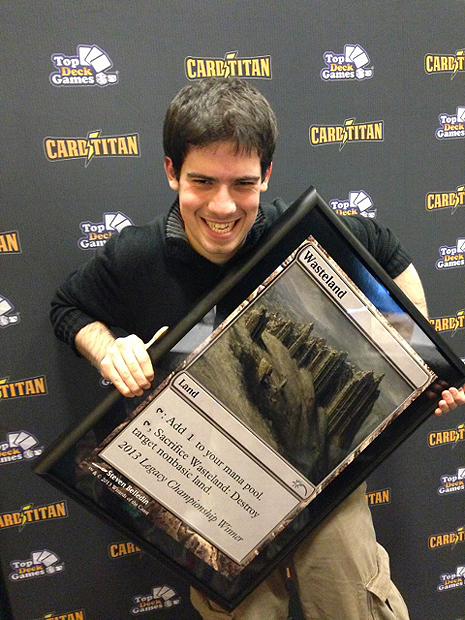 Lax came into the season qualified for all the Pro Tours on the schedule courtesy of his Gold level in the Player's Club and when the new Magic Top 25 Pro Rankings debuted at the start of the season, Lax found himself on that elite list. As he embarked on his new season, Lax and his teammates settled on a Rakdos Aggro deck that was very similar to the deck that Luis Navas used to win Grand Prix Santiago.

"I think the deck we ended up with was poorly positioned due to an unexpected metagame shift and not fundamentally bad," explained Lax of his Pro Tour Theros experience. "There were a lot of obvious flaws to fix along the way. For example, our very organized early testing became very scattered once we arrived on site. I missed this at prior events as I didn't arrive until later on, and as such was relatively unaffected by the issue. Most of the team is still qualified, and we are already working on fixing these kinds of things for the Pro Tour in Valencia."

With a lackluster Pro Tour showing and no notable GP finishes, Lax found himself falling below the Top 25 mark in the Magic Top 25 Rankings. Lax enjoyed seeing his name on that list to start the year but is only concerned with where his name appears come the end of the season.

"I was really pumped to see myself on the first Top 25 rankings, mostly because it was one more thing to joke/brag about, but falling off them temporarily doesn't especially matter to me. In the end there is exactly one point a year where they matter, and my place on that chart after that last Pro Tour is what matters. The targets are still Gold and Platinum, and looking at the scoreboard now is like looking at the Round 4 standings at a PT. It's a good start, but there is a long ways to go."

Ari Lax remains one of the most accomplished players on the Pro Tour without a Pro Tour Top 8 and getting that monkey off his back would go a long way toward the kind of end-of-year finish he is hoping for. Lax, who has only been playing on the Pro Tour for four years, does not let the pressure get to him and knows that his near misses mean he has the tools necessary to achieve the goal of every player who has ever registered for a PTQ. He focuses his energy on learning how he can improve his game with each experience and has his eyes on doing more than just reaching the Sunday stage.

"I do want to point out one thing I picked up from Craig Wescoe at Pro Tour Dragon's Maze . We were heading out of the site Saturday night after his Top 8 photo shoots, and his mindset was 'How do I win my next three matches? A Top 8 would be nice, but the event doesn't end there.'"

Preparation and learning were at the heart of Lax's presence at the Legacy Championships. What better arena to gain some experience with Death and Taxes than the annual pinnacle of Legacy play? Lax knew the deck was formidable but wanted to actually put it through some live play before sleeving it up for GP DC.

"It won the last Legacy Grand Prix and placed another nearly identical copy in the Top 4. It was clearly one of the top-tier decks in the format, but it was relatively underrepresented in my testing and I couldn't figure out why. I decided to see what was up, and it turns out the deck is awesome," said the Legacy Champion. "Unlike the stereotypical White Weenie deck, you have a lot of free wins and room to maneuver."

With such a vast card pool and so many decks to choose from, the Legacy format might seem daunting from a distance, but Lax explained that you could put decks into different buckets when figuring out if your weapon of choice can hack it in the world of high-level Eternal play.

"Oddly enough, Legacy is about as narrow as it has ever been now," he said. "Even in the past, when it was all over the place, it was easy to lump things into categories. 'How good is my deck against Daze and Wasteland?' covers a lot of how your deck performs against Merfolk and RUG Delver of Secrets. How your deck handles EsperBlade and Shardless BUG is going to be within the same ball park. Once you break it down like that, you can focus on where you feel the work is needed."

The high quality of the cards in Legacy means that the format evolves slowly, even as new cards enter the environment. It is rare that format gets a large influx of new cards that will impact Legacy players. The new Commander product that was released the same weekend of the tournament featured fifty-one new cards but only a couple that will see play in Legacy. One of those cards, True-Name Nemesis, was a featured player in the deck of Lax's finals opponent, Osyp Lebedowicz. The card has been described as a three-mana Progenitus and it is a commentary of the flexibility of the cards in Lax's sideboard that he was semi-prepared to deal with it.

"I had Meekstone for this weekend, but that's kind of the level-one answer. Obviously, that card is good against them, but you have to consider what the other fifty-six cards that come with True-Name Nemesis are," he elaborated. "If they were RUG Delver of Secrets, I was set. If it was a Stoneforge Mystic deck Meekstone solved one problem but not the rest. Fortunately, Death and Taxes can afford a bit of a narrow answer as it tends to be good against the other fair blue cards, but other decks might not be as lucky. Also, even if your deck doesn't care about a 3/1 for three, consider whether it cares about more opponents with decks featuring the rest of the blue cards."

His success with Death and Taxes comes with pluses and minuses when choosing what to play in DC in two weekends. On one hand, he knows the deck pretty well at this point and knows it can win, but he admitted that the deck could be overexposed.

"Being on everyone's mind definitely matters in a format where the hate cards are so powerful, but I'm unsure how much dedicated hate people can or will play," said Lax, who was impressed by at least one other deck he saw last weekend—RUG Delver of Secrets. "That deck is obviously good, but I hadn't really played a fair deck against it before. I'm used to the game being about whether I can pluck their Force of Wills and overpower their Dazes before I die. There are just so many ways to line your cards up against your opponents when they let you have options."

There is a short list of decks that Lax will be testing for the event. With only a handful of tournaments on his immediate horizon, he will be trying to get the most of each opportunity.

"I've got Grand Prix DC, then Grand Prix Toronto, then nothing until the Pro Tour," said Lax. "My goals are mostly incinerate a lot of now oddly free time, maybe start trying some Vintage brews, and get a head start on Modern for Pro Tour Born of the Gods."

Player of the Month (#MTGPoM): October

Last week, I listed six nominees for the October Player of the Month and asked players to use the hashtag #MTGPoM to help me narrow down the candidates to find a winner. The discussion broke down into three camps. The first were players strongly advocating for Grand Prix Louisville winner Brian Braun-Duin.

Another camp made the strong and compelling argument that the only thing that should matter in a month where someone wins a Pro Tour is winning a Pro Tour, and that Jérémy Dezani was the de facto winner of the award.

But the third camp was the most vocal and they advocated that the award should not be about any one result but sustained success over the course of the month, which pointed back at the aforementioned Braun-Duin and some other write-in candidates for the award.

I have to admit that coming into the process for this month I was leaning toward the second school of thought. After all, only a relatively small number of all Magic players have ever won a Pro Tour, and it is the goal of every player who has ever breathed a competitive breath. .

Join the ongoing conversation using the #MTGPoM hashtag and tell me what you think about the decision. And don't forget to chime in, in a couple of weeks, when we do it all over again.