have had a long Magic history that goes all the way back to Unlimited, but there are a couple of early blind spots where I just flat-out missed playing with some cards. I was so busy with running tournaments and opening a gaming store that I barely had a chance to play with Legends. As my local gaming community began preparing for the very first Pro Tour, which was held in New York, I suddenly found myself playing again. I was building decks, playtesting for events, and reexamining cards through a lens other than the glass top of my store's display case.

I know that one of the biggest surprises to come out of Pro Tour New York was Necropotence, but that was not the card that I would become enamored of after that first professional event. It was not even the card I would end up paying the most life to in order to draw cards over the course of my Magic-playing career. I am very excited to present to you the latest all-star to be revealed in the Vintage Masters starting lineup. 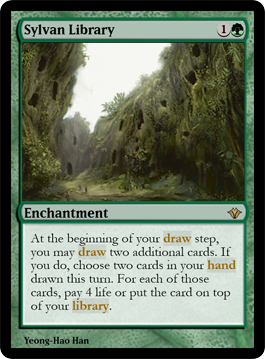 The deck where I first really took notice of Sylvan Library and its very unique approach to library manipulation was Bertrand Lestree's 2nd-place deck from that first Pro Tour. The deck, which was dubbed Erhnamgeddon, would influence many of the decks I would play over the ensuing decades—not that I fully understood how to play with Sylvan Library yet. Back then, I mostly saw it as a deck manipulation tool that would let you get to your key cards a little faster or to keep them bubbling down on the top of your deck, out of reach of those pesky Hymn to Tourachs.


I remember being out at the old Wizards of the Coast building—the one with the Mana Pool—less than a year later to talk about tournament organization and upcoming events. As always, one of the perks of a trip to Wizards is getting to play some Magic with R&D. They wanted us to sit in and try out this new format they were inventing called Booster Draft. It seems crazy to think that we lived in a world without Booster Draft, but back then people would play Sealed Deck as the only form of Limited—even playing heads up against one another for "funsies."

So there I was, trying out this new format—with a chorus of angels singing sublimely in my head—getting passed to by Richard Garfield. I think I did okay for myself, considering I had never even heard of such a format before. I cobbled together a Bant Millstone deck; the blue was for bounce and counterspells, the white was for Circles of Protection, and the green was for creatures and Sylvan Library. I don't remember much of the details of playing—I certainly don't remember winning at all with the deck. I definitely remember losing to Garfield, though, and what he said to me after the games.

I had all the tools to beat his aggressive creature deck—or at least as aggressive as you could get with Fourth Edition—including the right Circle of Protections. Despite having Sylvan Library in play during our last game and a Millstone to try and run him out of cards, I just never had enough mana to do everything I needed to stay alive. He eventually overwhelmed me and explained after:

"If you had just paid 8 life the turn after you played the Library I don't think I would have been able to beat you."

It had really never occurred to me that you could just pay 8 life and just keep two extra cards—and get to look three cards deeper on your next turn. It seemed insane to me at the time, but I would have not missed crucial land drops and been that many turns closer to finding my key cards. That one statement completely changed the way I played Magic for the next couple of years.

And was probably the reason I started playing Gerrard's Wisdom. While it was often correct to just dig for cards at the cost of 8 life against control decks it became a riskier proposition in an era of Jackal Pups and Wild Dogs. Fortunately, Gerrard's Wisdom was worth 14 life if you played it from an eight-card hand—and it could go as high as 18 on occasion. My Bant decks would often start with those two cards and Gaea's Blessing—I would usually have a single win condition—and I would work from there.

My next lessons in Sylvan Library manipulation came when I learned about replacement effects. Because Library only cares about you putting back the extra cards drawn this turn, if you have replaced those draws with another effect you get to avoid the high cost of drawing those extra cards. The first time I really started playing around with that was with Pursuit of Knowledge, which you could cash in for 7 cards if you replaced all three of your draws with Pursuit activations. I did this quite often—sometimes many times a game.

Eventually, one of my Pro Tour New York teammates won a PTQ with an Extended version of that deck—one that also threw back to Lestree's PT deck.


I truly loved playing this deck—which I often referred to as How to Keep an Idiot Busy—but Sylvan Library has some Hall of Fame pedigree as well, with none other than Bob Maher, Jr. making it a part of his successful Worlds decks. In true Great One fashion, he even paired Sylvan Library with a much better replacement effect—Abundance.

1 Shard Phoenix 1 Morphling 4 Force of Will

4 Brainstorm 1 Forbid 4 Force of Will 3 Impulse


With an Abundance in play you could replace each draw from Sylvan Library by naming land or nonland. You would end up with three cards of the land-to-spell ratio you desired each turn, and because you never had those two extra cards from the Sylvan Library—remember, you replaced those draws with Abundance activations—you didn't have to pay any life. It is one of the filthier two-card combos in Magic history and very hard to overcome once it gets going.

You will have your chance to look for synergies and replacement effects once Sylvan Library comes out in Vintage Masters. It will be nearly eighteen years later but I still plan on drafting it... but this time I plan on starting turn three on 12 life.