Living Out of Suitcases

omadic Magic players, event coordinators, and coverage team members are all living out of suitcases these next few weeks as the second leg of the 2009 Pro Tour season is in full gear. Grand Prix–Barcelona is on the books and an updated version of the Cascade Swans deck from last week's column, a.k.a. The Ugly Duckling, emerged on top—and not without a little bit of controversy.

In my interview with Parth Modi last week, who played the deck to a U.S. Nationals invitation, attributed the deck's origins to Chris Davis. In the coverage from Barcelona it became clear that Paulo Vitor Damo da Rosa felt that the deck was something he created and was somehow leaked to players participating in Regionals without his approval. Deck design is always a sticky and complex situation. It does appear that Chris Davis and PV were working on the deck via the same online team, but Parth had no idea about Paulo's involvement at the time he played the deck, and the deck came with a strong recomendation from his teammates to play it at Regionals. 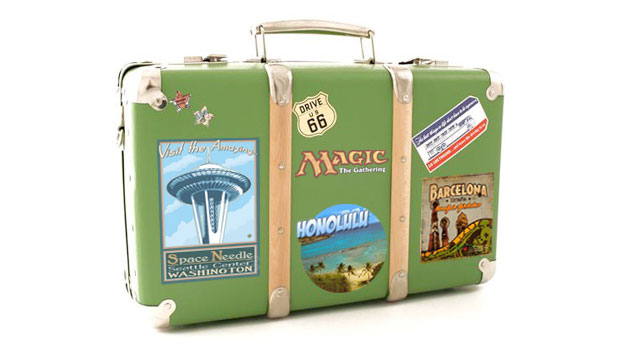 If there was some question about whether or not a 40+ land deck built around using cascade spells as pseudo-tutors was a serious deck, the answer from Barcelona was a resounding "Yes!" The "leak" did not appear to hurt Paulo too badly as he managed to make the Top 4 of Grand Prix–Barcelona playing the most recent iteration of the deck, losing to eventual winner Joel Calafell in the semifinals in what could be harbinger of many mirror matches this coming weekend at Grand Prix–Seattle/Tacoma. The mirror is very interesting in that either player can win off of a Swan controlled by either player. How players approach their sideboard plans for what should be a heavily played deck this weekend will certainly be one of the evolutions of the deck that we will be checking on in the coverage.

Sam Black also wrote about Cascade Swans last week and posited that the arrival of the deck could open the door for the dreaded Faeries to make a reappearance. Sam put his money where his mouth was—or should I say Pro Points where his cursor was—and finished in the Top 4 of Barcelona playing his well-worn Bitterblossoms and Spellstutter Sprites. Sam is one of the players who has been putting a lot of stamps on his passport this season, and this was his second Top 8 at a Grand Prix in 2009.

The finish brought Sam's Pro Point total for the year to 19 and landed him in fifth for the season going into three big weekends during which he can close some serious ground on the frontrunners—who were largely unchanged by the events in Barcelona. Paulo also made up some much-needed ground and almost doubled his point total on the season from 7 to 13 with his finish. It left him just outside the Top 10 in this year's race and in a good place with the Seattle/Tacoma, Honolulu, and Sao Paulo run coming up. You can find the complete standings page here. 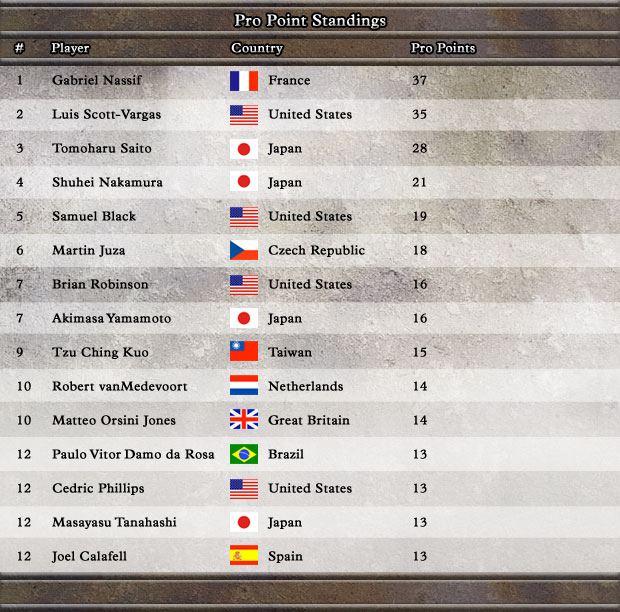 Ahead of Black on the list only Nassif and Saito did not remain in lockstep. Scott-Vargas and Nakamura each picked up one point, while Nassif inched ahead with 2 points and Saito stumbled on Day Two to finish just out of the points. Cedric Phillips is not a name you are used to seeing in the standings of a foreign Grand Prix, but the breakout player from Kyoto managed to pick up an additional point. That's at a tournament started with nearly 1,500 players—it was the biggest Constructed tournament of all time—and only the Top 64 received any Pro Points.

This weekend's Grand Prix–Seattle/Tacoma is unlikely to reach the four-digit mark, but it should easily break the record for a Northwestern Grand Prix—past events in this area have been in the 400- to 500-player range—with so many players using this event as a stopover before going to Hawaii. Don't forget to stay tuned to magicthegathering.com as Rich Hagon and I tag-team the coverage of what is sure to be a star-studded field, trying to stay one step ahead of this exciting Standard metagame.

One deck that stood out for me from the coverage of Barcelona—and that I hope has some legs this weekend—was Kenny Öberg's Combo Elves deck. While the deck is not able to pull out an instant-speed win condition such as Predator Dragon, or a win-this-turn condition like any of the storm combos that Elves have become associated with in Extended, it can play virtually every card in its deck and then Primal Command its opponent back to the stone age. It has to pass the turn to untap and win a turn later, but when all your opponent's lands are on top of their deck it is more comfortable to do this than it is under normal circumstances.

Kenny has become one of my favorite rogue deck designers since his stunning Top 8 in Berlin with Tezzerator, and I hope that somebody has this little number packed in their suitcase so I can see it in action this weekend. One of the interesting challenges that players running the second leg of the Pro Tour season is having to pack their Standard decks (and the components to build new ones on the fly as the metagame evolves over three tournaments), bring packs to practice drafting for Honolulu (this will be the first Limited Top 8 since Jon Finkel won Pro Tour–Kuala Lumpur last season), and bring the fixings to build their Shards of Alara Block Constructed decks for the 60-card portion of Pro Tour–Honolulu.

If they have been looking over the lists that have emerged from the Magic Online Block PEs since Alara Reborn has been added to the mix, they had better have packed their Bloodhall Oozes from Conflux. With Jund Hackblade and Putrid Leech providing cheap, efficient beatdown in green and black, Bloodhall Ooze has plenty of ways to get out of hand very quickly. Here is an example of one list that has emerged on top.

I don't know if the player who goes by the screen name FFfreaK is qualified for Hawaii or not, but he or she is tearing up the PEs. FFfreaK won the first and last Shards of Alara Block Constructed events featured in Decks of the Week—with additional appearances in between—and did so using two very different decks that were made up from all the wedges of the color pie. First was a White Weenie update that added blue for Ardent Plea and Aven Mimeomancer. As a bonus, the deck gets to use Knight of the White Orchid in conjunction with the Borderposts to help to fix its mana.

3 Lapse of Certainty 3 Path to Exile

FFfreaK closed the week with a four-color beatdown deck that featured Madrush Cyclops fighting side by side with Sedraxis Specter.

It should be an eye-opening couple of weeks, and I'll be feature match-side for the whole time. Rich Hagon and I are handling coverage at Grand Prix–Seattle/Tacoma, and then we join up with the rest of the coverage crew in Honolulu next week for the PT.

Although much of the tournament-playing community’s attention is likely fixated on the upcoming Grand Prix in Seattle, Pro Tour–Honolulu, and Grand Prix–Sao Paulo, it’s not too early to think about Magic 2010. Wizards Play Network locations around the world are sanctioning prereleases for the new core set, to be held July 11-12. To make sure your favorite store or location doesn’t get left out, talk to your local organizer and make sure they’ve scheduled their prerelease. With a bunch of new cards plus the return of some old favorites, it should be a unique prerelease experience! More information on Magic 2010 prereleases and launch parties will be coming to this very site shortly.

Starting with Regionals two weeks ago, the Standard landscape has been awash with innovation and breakout decks. What's in store for the players this weekend at the Grand Prix? Let your voice be heard on the forums and assert your grasp of the Standard metagame.